Objective: To evaluate the relationship between vitamin D deficiency and dysfunctional labour.
Methods: The cross-sectional study was conducted in the Department of Obstetrics and Gynaecology, Al-Yarmouk Teaching Hospital, Baghdad, Iraq, from February to October 2016, and comprised primigravida women who presented with active labour after term pregnancies that were 37-42weeks long. Through history, examination and investigations, the patients were evaluated according to the mode of delivery and the prolongation of 1st or 2nd stage of labour. Also, 5ml blood was taken from each subject and centrifuged for the measurement of vitamin D level using enzyme-linked immunosorbent assasy, and to correlate it with the subjects. Data was analysed using SPSS 20.
Results: There were 100 subjects with a mean age of 28.85 } 5.47 years (range: 17-37 years). Of them, 87(87%) had normal vaginal delivery while 13(1`3%) underwent caesarean section. Vitamin D level was significantly higher in patients who had vaginal delivery, 48.7}22.4nmole/L compared to31.9}16.0nmole/L in patients with caesarean
section. Normal vitamin D level was significantly associated with vaginal delivery (p<0.001), but there was no significant association between vitamin D and stage of labour (p>0.05)).
Conclusion: Low vitamin D may influence the progress of labour and increase the rate of caesarean section.
Keywords: Vitamin D level, Dysfunctional labour, Caesarean delivery. (JPMA 69: S-55 (Suppl. 3); 2019)

Recent research has shown that vitamin D, which is a fatsoluble steroid hormone and plays a role in immune system, infection, cell proliferation and cancer, also has a role in pregnancy when the serum level of active form of vitamin D increases up to two folds, starting at the first trimester reaching the maximum in the third trimester, and contributes to obstetric wellbeing.1 Labour is a physiological process consisting of three stages as defined by Freidmanin 1955. The first stage is divided into latent and active phase. The active phase usually starts at 3-4 cm cervical dilation, but the Consortium on Safe Labour (CSL) defined the active phase of labour as beginning with 6cm cervical dilatation. With complete dilatation of the cervix, the second stage of labour gets started, while the delivery of the foetus and the placenta is regarded as the third stage of labour. 2,3Abnormalities of first stage include abnormalities of both cervical dilation and descent of the presenting part. When the active first stage is >95th percentile (more than 8.6 hours), it is associated with higher maternal risk and a higher caesarean section (CS) rate. The 95th percentile for the second stage without regional anaesthesia for nulliparous is 2.8 hours and 3.6 hours with regional anaesthesia, as defined by the CSL, while the 95th percentile for multiparous women with and without regional anaesthesia is around 1 and 2 hours respectively. The delivery is expedient by spontaneous vaginal delivery (SVD) or by CS if abnormalities of labour or foetal heart rate have occurred. 4,5 Vitamin D deficiency is defined as level <20ng/ml (50nmol/L). 6 The production of vitamin D in the kidney is regulated by plasma parathyroid hormone (PTH), serum calcium and phosphate level. 7 In adults, the largest source of vitamin D is from solar radiation while dietary intake of vitamin D makes a small contribution to overall vitamin D status. 8 Obese persons have reduced vitamin D concentration. Maternal obesity has become one of the most commonly occurring risk factors in obstetric practice. Obesity is usually defined as body mass index (BMI) equal or >30kg/m2.8, 9 Preeclampsia, gestational diabetes mellitus (GDM), low birth weight (LBW), preterm delivery, and CS are hypothesised to be related to vitamin D level. 10Negligence of female health, malnutrition, especially in the developing countries, have impact on neonatal outcome. 11 Routine screening for vitamin D deficiency in pregnancy is not supported in terms of health benefits or cost-effectiveness. 12 Pelvic deformities caused by severe vitamin D deficiency and rickets have been known to increase the risk of obstructed labour. Muscle performance and voluntary bearing down required to expel the foetus in the second stage of labour can be related to CS, prolonged first stage or second stage of labour, and instrumental delivery. The contractile proteins in myometrial cells are regulated by vitamin D. 13  The current study was planned to evaluate the relationship between vitamin D deficiency and dysfunctional labour.

The cross-sectional study was conducted in the Department of Obstetrics and Gynaecology, Al-Yarmouk Teaching Hospital, Baghdad, Iraq, from February to October 2016. After taking approval from the institutional ethics committee and the Iraqi Board for Medical Specialisations, primigravida pregnant women aged 17- 37 years in active labour (4cm cervical dilatation with uterine contractions ) with gestational age between 37-42 completed weeks (calculated from reliable last menstrual periods and the first or early 2nd trimester ultrasound), with single viable foetus, longitudinal lie and cephalic presentation were enrolled from the labour room. Those excluded were women aged >37 years; medical conditions like DM, and hypertension; multiple pregnancies; foetal congenital malformation, like anencephaly and hydrocephaly; macrosomic foetus weighing 4kg or more; abnormalities of amniotic fluid; cephalopelvic disproportion; any indication for emergency CS during labour, like foetal distress; intrauterine foetal death; or intrauterine growth restriction. After getting informed consent from all the subjects, detailed history was taken, including obstetrical, medical, surgical, family and medication aspects. Examination was done for all pregnant women, and it included the measurements of height and weight, calculation of BMI, measurement of vital signs, general, abdominal and obstetrical examination with the assessment of uterine contractions, foetal heart rate and pelvic examination (pelvimetry). All the woman had undergone investigations for blood group and Rhesus (Rh) factor, complete blood picture. Another 5 millilitres of venous blood was collected and placed in sterile tubes labelled with patient's name. The sample was centrifuged for 15 minute and then kept at -4°C. Vitamin D (25[OH]D) was determined using enzyme-linked immunosorbant assay (ELISA) assay kit (Euroimmun Medizinische Labordiagnostika AG, EQ6411-9601) at a private laboratory. All patient information was plotted on the partograph. The women were followed during their labour for frequent auscultation of foetal heart rate every 15 minutes, monitoring of uterine contraction and per vaginal examination every 2-4 hours. Efficient uterine contractions were considered when there were three contractions in 10 minutes, with each lasting more than 40 seconds. Augmentation of labour with artificial rupture of membrane and oxytocin infusion were used for patients with inefficient uterine contraction. It was started with 2mIU per minute and was increased gradually in rate of flow and in dose of oxytocin up to 10mIU per minute. First stage of labour was described as the time from diagnosis of labour to full dilatation of the cervix (10cm). Prolongation of the 1st stage of labour was considered when it lasted >8 hours. The 2nd stage was taken as the time from full dilatation of the cervix till the delivery of the foetus. Prolongation of the 2nd stage was considered when it lasted >2hours. Data was analyzed using SPSS 20 and Minitab 17.1.0 according to the mode and abnormalities of delivery. Anderson darling test, Chi square test and Fisher exact test, were used, where appropriate. Two-sample t test was used to analyse the differences in means and standard deviations (SDs) between the groups. To calculate the odds ratio (OR) and their 95% confidence intervals (CI), binary logistic regression analysis was done. The relationship between different variables was assessed by Linear regression analysis. The value of r, which is the correlation coefficient or standardised beta and is a representative of the magnitude and direction of the relationship, was categorised" r<0.25 weak, 0.25-0.5 mild, 0.5-0.75 moderate, >0.75 strong correlation. P<0.05 was considered statistically significant. 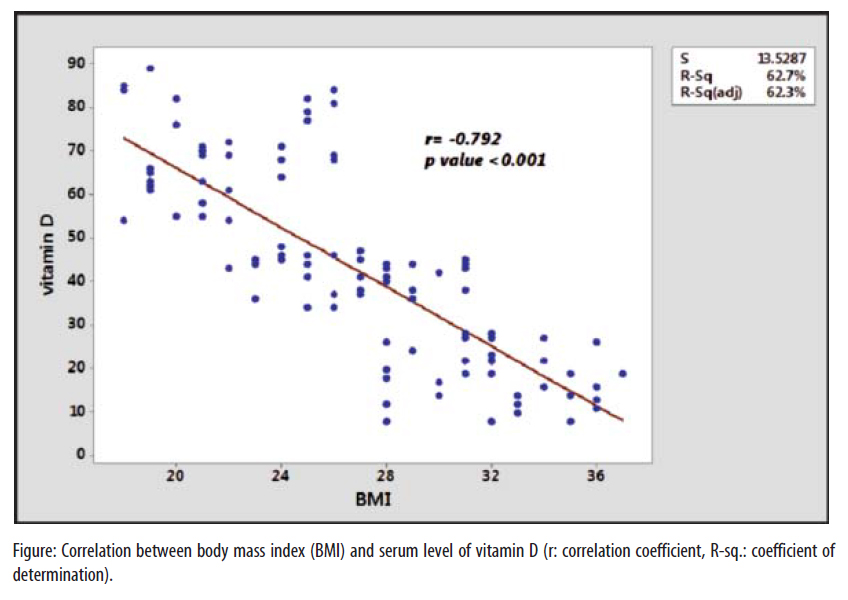 Vitamin D has a significant role in muscle performance and its deficiency is significantly associated with poor skeletal muscle activity in vivo, and it plays a role in obstetrics by regulating contractile proteins of myometrial cells. 14   The age of the selected sample ranged 17-37 years, and the mean age of the sample was comparable with earlier studies. 15,16   Women of old age were excluded because with increasing age there are changes in the expression of vitamin D receptors which might affect the outcome of labour. 16   Concerning the  distribution of age with vitamin D status, there was a clear trend showing that the younger the pregnant women were, the higher level of serum vitamin D there was. In contrast, Gale et al. 16   in the United Kingdom reported no significant difference in age between different vitamin D groups. The difference in results could be attributed to differences in dietary habits and lifestyle between the two populations. Significant inverse relationship between BMI and vitamin D level was found in the current study (P<0.001). Perez-Lopez et al. 17   showed the same inverse association and reported that the use of bodyweight instead of BMI was better predictor of vitamin D deficiency. The CS rate in the current study was 13% and serum vitamin D was 31.9}16.0nmol/L in this group compared to 48.7}22.4nmol/L in SVD, which means Vitamin D level was significantly higher in SVD women compared to CS women, and this is in agreement with Scholl et al. 18   who examined vitamin D in 1153 low-income women in the United States and found an increased CS risk for women with Vitamin D <30nmol/L compared to 50-125 nmol/L level. Merewood et al. 19   in 2009 found an inverse association between serum vitamin D and the CS risk and in their multivariate analysis they reported an adjusted OR of 3.84 with 95% CI being 1.71-8.62. It has been suggested that vitamin D receptor in tissue is a nuclear receptor that can bind vitamin D3 with high affinity and exerts its function to regulate synthesis of protein. 20   Our finding of weak association between low vitamin D and prolongation in both stage 1 and stage 2 in delivery is a reflection of the importance of vitamin D in muscle function and the ability of the myometrial muscle to push the baby during delivery. Just one earlier study had examined the association between vitamin D level and the prolongation of stages 1 and 2 of labour 15 which found no significant association between the two elements. 15   Despite this non-significant relation, it reported a weak increment in the risk of prolonged stages 1 and 2 in subjects with serum vitamin D <30nmol/L, which is similar to our results.

Low vitamin D serum level during labour was an important predictor of delivery outcome and the increasing rate of CS. However, there was no significant association of vitamin D deficiency with prolonged first and second stages of labour.

Acknowledgement: We are grateful to Dr. Farked Abid Hassan and Dr. Ali Muneeb Al-Rubaee for their support and assistance.
Disclaimer: None.
Conflicts of Interest: None.
Source of Funding: None.