Overweight and obesity are defined as abnormal or excessive fat accumulation that may impair health. Overweight and obesity are the fifth leading risk for global deaths. At least 2.8 million adults die each year as a result of being overweight or obese.1 At its simplest level, obesity is caused when people overeat in relation to their energy needs. At the same time, as energy expenditure has dropped considerably, environmental factors have combined to make it increasingly easy for people to consume more calories than they need. 2 Obesity may be either unspecific as indicated by an increase in body mass index (BMI) or due to abnormal fat distribution as indicated by an increased waist-hip ratio (WHR). 3 WHR, BMI and subcutaneous fat are important indicators of obesity, cardiovascular disease and hypertension (HTN). BMI was the best overall predictor for both systolic and diastolic blood pressure (BP). However, epidemiological studies have suggested that WHR is also an independent risk factor of cardiovascular disease for both genders, especially in females. 4BP is influenced by different factors, such as WHR, BMI, adiposity and environmental factors, and is the key for understanding coronary diseases. The people of South Asian origin have increased cardiovascular risk due to more centralized deposition of body fat with higher mean of waist circumference (WC) and WHR compared to the Europeans. 5 Overweight is associated with an increased prevalence of cardiovascular risk factors, such as HTN, unfavourable blood lipid concentration and diabetes mellitus (DM). It was estimated that a 10% reduction in body-weight would correspond to a 20% reduction in the risk of developing coronary vascular diseases (CVDs). 6 In retrospective studies assessing fat distribution by skin folds, abdominal fatness was a significant risk factor for coronary heart disease (CHD) independent of BMI. Abdominal fatness is associated with increased levels of insulin and triglycerides (TG) and decreased levels of high density lipoprotein (HDL), which may be associated with haemostatic and fibrinolytic factors that contribute to an increased risk of myocardial infarction (MI). 7 According to the results of a meta-analysis, a weight-loss of 1kg is associated with a decrease of 1.2-1.6mmHg in systolic and 1.0-1.3mmHg in diastolic BP. 8 Body fat distribution seems to predict HTN independent of BMI. The full impact of childhood obesity epidemic on the rate of type 2 diabetes mellitus (T2DM) in young adults has not yet been seen. 9 The total causal role of overweight in the development of non-insulin-dependent diabetes mellitus (NIDDM) is supported by evidence that weight-loss in NIDDM improves glucose tolerance and reduces the need for hypoglycaemic drugs. Moreover, experimental overweight in normal young men reduced insulin sensitivity and the effect was reversible with weightloss. 10 Dyslipidaemia plays a major role in the development of atherosclerosis and CVD in obese individuals. All of the components of dyslipidaemia, including higher TG and decreased HDL levels, as well as increased small, dense low density lipoprotein (LDL) particles, have been shown to be atherogenic. Weightloss and exercise improve dyslipidaemia and thus reduce CVD risk. In addition, obese individuals should be targeted for intense lipid-lowering therapy, when necessary. 11 The current study was planned to evaluate the correlation between BMI, WHR and CVDs in obese patients.

The cross-sectional study was conducted at Al Yarmouk Teaching Hospital, Baghdad, Iraq, from March to October, 2016, and comprised patients with ischaemic heart disease who were recruited from the consultant coronary care unit (CCU). After approval from the institutional ethics committee patients were selected according to the American Association of Hypertension and Ischaemic Heart Disease. 12 Informed verbal consent was obtained from the subjects after which detailed medical history was taken and clinical examination and investigations were done. Following overnight fasting, 5mL venous blood was collected for assessing fasting blood glucose (FBG), total cholesterol (TC), triglyceride (TG) and high density lipoprotein (HDL). Low density lipoprotein (LDL) was evaluated using Friedewald method. 13 Height and weight were measured by graduated tape measure and digital stadiometer. BMI was equal to bodyweight (BW) (kg)/Height (m2). 14 Waist circumference (WC) was measured in the standing position at the midpoint between the last rib and iliac crest. 15 Hip circumference (HC) was measured in the standing position and was taken as the distance between greater trochanters. 16 BP was measured at supine position by digital sphygmomanometer from the right arm. Electrocardiography (ECG) was done by 12-lead ECG recorder (GE, Marquette, Mac 800 ECG, EKG-machine, USA). Data was analysed using SPSS 21 and was expressed as mean } standard deviation (SD). 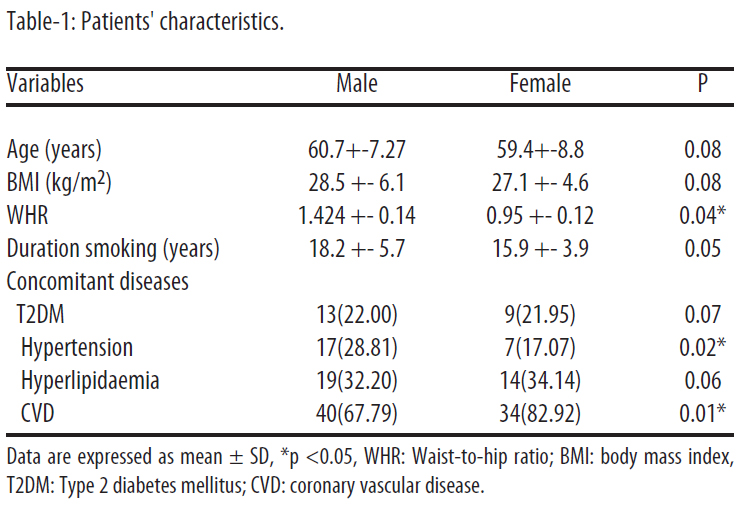 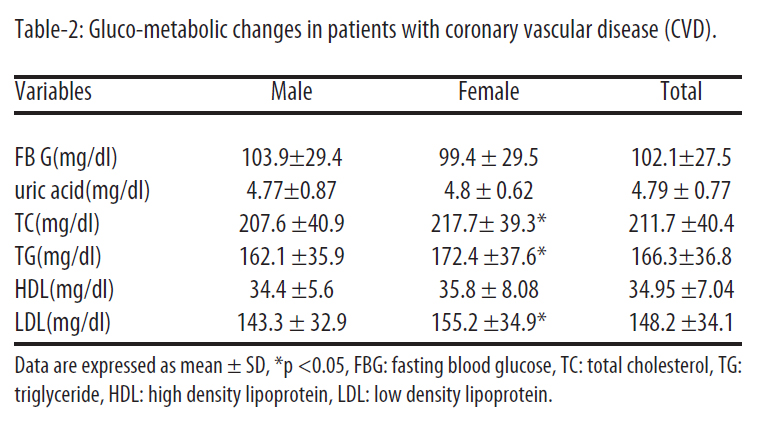 WHR was more significantly correlated than BMI with metabolic and cardiovascular disorders (p<0.05). All the diseases assessed were correlated with WHR (p<0.05) while high BMI was correlated only with HTN and T2DM (Table-3).

The results confirmed a positive correlation between various anthropometric measurements and CVD, indicating a positive correlation between CVD and BMI. The finding is in accordance with literature. 17 In Framingham Heart study, the risk of death within 26 years increased by 1% for each extra pound between age 30 years and 42 years, and by 2% between the age of 50 years and 62 years. 18 Other studies confirmed the risk of non-fatal MI among women with a BMI >29, which was 3 times higher than that in the leanest group. The correlation between CVD and high WHR in the current study was stronger than the correlation between BMI and CVD which was also reported by an earlier study. 19 Regional fat distribution is an independent factor determining the risk of developing complications associated with obesity, like CHD, stroke and DM. Although abdominal fat is more common in men, the risk of heart disease increases with the amount of abdominal fat both in men and women. 20 Abdominal obesity is associated with increased TG, and decreased HDL. In addition, abdominal fatness may be associated with abnormal haemostatic and fibrinolytic complications, which also contribute to an increased risk of MI. 21,22 Initial epidemiological data had identified obesity as an important risk factor for CVD by acting indirectly through elevation of BP, blood cholesterol level and DM, but more recent analyses of the data from Framingham Heart study, with longer follow-up of people in the cohort, have once again suggested that obesity is indeed a primary risk factor acting independent of other factors. 23 Moreover, individuals with weight fluctuation scarry increased risk of CVD and death than those with relatively stable bodyweight. 24

WHR was found to be more correlated with CVD and cardio-metabolic profile than BMI in patients with ischemic heart disease.

Acknowledgment: We are grateful to all the staff members of the Department of Clinical Pharmacology and Therapeutics for their cooperation and support.
Disclaimer: None.
Conflicts of Interest: None.
Source of Funding: None.

health risk': simpler and more predictive than using a 'matrix' based on BMI and waist circumference. BMJ Open 2016;6:e010159.