Microalbuminuria and left ventricular hypertrophy in patients with essential hypertension

Hypertension (HTN) is a disease that affects about one billion individuals worldwide. It increases the risk for the development of cerebral, cardiac and renal events.1 Essential hypertension (EH) is one of the most common medical problems in the general population and is one of the most important modifiable cardiovascular (CV) risk factors. Many EH patients may present with overt or sub-clinical target organ damage (TOD) involving the heart, kidneys, central nervous system (CNS) or retina at the time of their initial diagnosis. 2 The cost-effectiveness of blood pressure (BP) reduction using drug therapy is greater in the presence of target organ abnormalities and/or co-morbidities. In this context, assessment of sub-clinical TOD has become the key element in evaluating hypertensive patients. Microalbuminuria (MA), defined as the excretion of >30mg and <300mg a day of albumin in the urine, is one of the earliest indications of kidney injury in patients with diabetes mellitus (DM) and HTN, and is associated with high incidence of cardiovascular morbidity. 3 MA is an early indicator of renal damage and has been demonstrated as one of the principal predictive factors of all-cause CV complications, and CV mortality independent of the traditional risk factors like dyslipidaemia and HTN. 4,5 Left ventricular hypertrophy (LVH) is another manifestation of preclinical disease and has long been known as a powerful independent risk factor for all CV complications of HTN and has also been associated with increased morbidity and mortality. 6 The development of both MA and LVH run parallel due to the impact of not only haemodynamic but also non-haemodynamic factors.7,8 The current study was planned to assess the relationship between MA and LVH in patients with EH.

The case-control study was conducted at Al-Yarmouk Teaching Hospital, Baghdad, Iraq, from June 1 to December 31, 2016, and comprised newly-diagnosed adult EH patients attending the outpatient clinic, or admitted to the medical ward. Those included were hypertensives with systolic blood pressure (SBP) equal to or >140mmHg, diastolic blood pressure (DBP) equal to or >90mmHg, or both. Those excluded were patients with secondary HTN, concomitant illnesses, any chronic cardiac, hepatic or renal condition, history of DM, and patients who were febrile, anaemic, disabled or uncooperative, as well as, patients with inflammatory diseases or cancer.  After the participants provided informed consent, they were divided into 2 equal groups comprising those with and without LVH. The presence or absence of LVH was determined by echocardiogram (ECG) findings. Demographic information collected included age, gender, smoking status and family history of HTN. Blood samples were drawn and evaluated for fasting blood glucose (FBG), serum creatinine, and total cholesterol (TC). BP was measured with a mercury sphygmomanometer while the patients were in the sitting position, and the arms were positioned at the level of the heart. Two measurements were made at least 5 minutes apart. The average of the two values was taken as the baseline BP. All ECGs were performed using ultrasonography machines (Vivid EQ and Philips CX50). Left ventricle (LV) mass, size of cardiac chambers, ejection fraction (EF) and shortening fraction were calculated, and the valves were examined. Pulse Doppler was done to estimate the E/A wave ratio of the mitral valve, while colour Doppler and tissue Doppler were also performed. All the measurements and views were obtained according to the recommendations of the American Society of Echocardiography. 9,10The LV mass was calculated in grams on the basis of ventricular septal thickness (VST), left ventricular internal dimension (LVID), and posterior wall thickness (PWT) using the formula 11:

A random urine sample from each patient was tested for albumin and creatinine separately. After taking the sample, it was centrifuged for 7-10 minutes after which 0.02 ml of it was taken and was mixed with 1ml of a antiserum reagent and incubated for 5 minutes at 37.0 C~. The absorbance of the sample was measured at 623nm against the reagent blank, using a spectrophotometer. Next, 10 microliter of water and standard solution were used to measure the absorbance of the reagent blank and the standard respectively. The concentration of albumin was calculated by using the equation: (A sample/a standard)× Concentration of standard= concentration of albumin. 13 Urinary creatinine was determined by taking 0.2 ml from the centrifuged sample and mixing it with 10ml distilled water and putting in an autoanalyzer (Flexor ELITech) and noting down the result . Finally, albumin-to-creatinine ratio (ACR) was calculated using the equation: ACR= urine albumin / urine creatinine. MA was defined as ACR ranging 30-300μg/mg. 14 Data was analysed using SPSS 22 and Microsoft Excel. And was expressed as means } standard deviation (SD) as well as and frequencies and percentages. Chi-square test of significance of association was used to assess relations between categorical variable, while independent t-test was used to analyse the difference between the means of continuous variables. Level of significance was set at p<0.05.t. 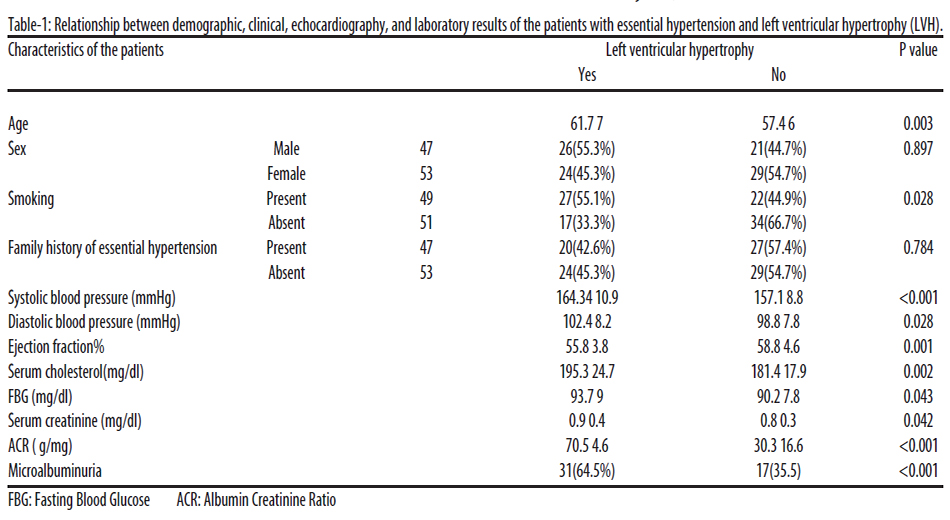 Age was positively associated with LVH (p=0.003), while there was no relation between gender or family history of HTN with LVH (p>0.05). Mean SBP, DBP, FBG, TC, creatinine and ACR were higher in patients than in the controls (p<0.05). Patients with MA had a mean age of 62.3}6 years, which was higher than of those without MA. Likewise, mean SBP, DBP, TC, FBG, creatinine and ACR values were higher in AM patients than those without MA (Table-2).

The relationship between HTN stage and MA was statistically significant (p=0.001) (Table-3).

The study found that patients with EH and LVH had higher MA levels than patients without LVH. The other important finding is that MA prevalence higher in patients with HTN and LVH. This observational finding confirms the importance of MA as a risk factor for CV diseases, especially coronary artery disease (CAD). Regarding the mean age of patients, it was 59}7.2 years which is compatible with other studies.15-18 With reference to the gender distribution, it was 47% male and 53% female which was also compatible with other studies19,20 while it was incompatible with some others.15,17,18 The current study had 49 (49%) smokers which was consistent with some studies 19,21and inconsistent with others. 17,18The current study had 49 (49%) patients with a positive family history of HTN. Again, this was in line with some studies 19 and in contrast with others. 18,21 Indeed, the same was the case with all the other parameters, including mean SBP, DBPTC, FBG, Creatinine ACR, MA prevalence and and the relationship between MA and LVH.15-19,21,22 The limitation of the current study is its small sample size which cannot reflect the whole history of EH patients. Also, the study used an ordinary BP machine instead of opting for 24-hBP monitoring which is more accurate.

There was a high prevalence of MA and LVH in patients with EH. Early detection of LVH can be treated by antihypertensive drugs in addition to lifestyle modification that can avoid or reduce HTN-related morbidity and mortality. Besides, MA showed comparable strength of association with LVH in patients with EH, showing a positive correlation between the two conditions. Predicting LVH via an easily obtainable laboratory test, such as MA, can be clinically useful.

Disclaimer: Nothing to declare
Conflict of Interest: The authors have no conflict of interests.
Source of Funding: Ministry of Health, Iraq.