Objective: To determine the effect of short education session on drug compliance on hypertensive patients visiting primary healthcare centres.
Methods: The interventional study was conducted from January to May, 2017, at 10 primary healthcare centres that were selected through multi-stage random sampling from those functioning under the Baghdad/Al-Rusafa Health Directorate, Baghdad, Iraq. Those included were patients aged 20-79 years diagnosed with hypertension with a history of at least one year. The subjects were divided into two intervention, and control groups. After baseline interviews regarding compliance with medical treatment. In each visit, 3-4 patients were selected, and were exposed to the education session about the risks of untreated hypertension, and they were given an appointment for one month later to measure their compliance rate. In the control group,
the compliance rate was measured twice within a month. Data was analysed using SPSS 24.
Results: Of the 600 subjects, there were 300(50%) in each of the two groups. The compliance rate increased significantly within
the intervention group (p=0.0001) and also in comparison with the controls (p=0.0001). Apart from medicines per day, all other factors showed non-significant association with compliance rate.
Conclusions: The health education session caused significant improvement in the rate of compliance with drug regimen in hypertensive patients.
Keywords: Compliance, Education session, Hypertension. (JPMA 69: S-9 (Suppl. 3); 2019)

Hypertension (HTN) is a major public health problem in both the developed and the developing countries,1 and good control of the disease has always been considered essential for reducing the related morbidity and mortality. 2 Many researchers believe that one of the major causes of uncontrolled blood pressure (BP) is failure to take medication as prescribed and this has been recognised as a major public health concern which contributes to patient morbidity, mortality and healthcare costs. 3 In the Eastern Mediterranean region, HTN affects 20-26% of adult population >35 years of age. 4 In Iraq, a survey about the risk factors of non-communicable diseases conducted in 2006 showed HTN prevalence of 40.4%,5 while the last survey conducted in 2015 showed the prevalence at 35.6%.6HTN is not only the most common, but is also one of the most important modifiable risk factors for coronary heart disease, stroke, congestive heart failure, chronic renal disease, and peripheral vascular disease.7,8 A study demonstrated that educational interventions increased participants' levels of knowledge about HTN and had a positive influence on their beliefs about medicines. 9 Through specific education, misconceptions that the patients have about their therapy can be clarified. This can influence adherence to the therapy, and, therefore, may potentially lead to improved BP control.10,11 The current study was planned to assess the effect of short education sessions about HT on improving compliance with medical treatment among HTN patients attending primary healthcare centres (PHCs)

The interventional study was conducted from January 2 to May 31, 2017, at 10 PHCs functioning under the Al- Rusafa Health Directorate, Baghdad, Iraq. The PHCs were selected through multi-stage random sampling. The Baghdad Governorate has two directorates: Al-Russafa, and Al-Karkh. The former was chosen by simple random sampling technique. The Directorate has 10 health sectors, and each sector has 10-12 PHCs. From each sector, a single PHC was chosen using simple random sampling, and from each PHC, a similar number of patients were chosen in order to ensure similarity, and to avoid selection bias. Patients of either gender were selected using convenience sampling from among those aged 20-79 years and diagnosed with HTN with a history of at least one year of receiving medical treatment. Females with pregnancy-induced HTN were excluded. The subjects were divided into intervention and control groups that were matched for age, gender, education level and marital status. After written informed consent from the participants, data was obtained through direct interviews. Sociodemographic data included age, gender, marital status, level of education, family history and smoking status, as well as any history of other chronic diseases and duration of the disease. Also noted were the number of drugs, and the number of doses per day. Compliance was recorded as 'good' when the patient was found to be taking all medications in accordance with the prescription; 'medium' if 1-3 doses per month were missed; and 'poor' when more than three doses per month were missed. Patients' medical files were subsequently scrutinised to see the date of their previous visits and whether he/she had attended the clinic on the committed date. The patients who finished the interview were put together in groups of 3-4 patients. They researcher were given a short education session about the nature, HTN, and the benefit of compliance with medical treatment on their health. The session was in the form of a short video lasting about 5 minutes, and the patients were encouraged to ask questions that were answered by the researchers. All such patients were given an appointment for one month later when the compliance rate was reassessed. In the control group, compliance to medical treatment was assessed in a similar way as illustrated in the intervention group, but they were given the appointment for one month later without being exposed to the education session. Data was analysed using SSPS 24, and was presented as frequencies and percentages. The significance of difference in qualitative data was tested by using Pearson Chi-square test and statistical significance was set at p<0.05. 12

The number of drugs taken daily by the patients was the only factor showing significant improvement in terms of compliance rate (Table-3). 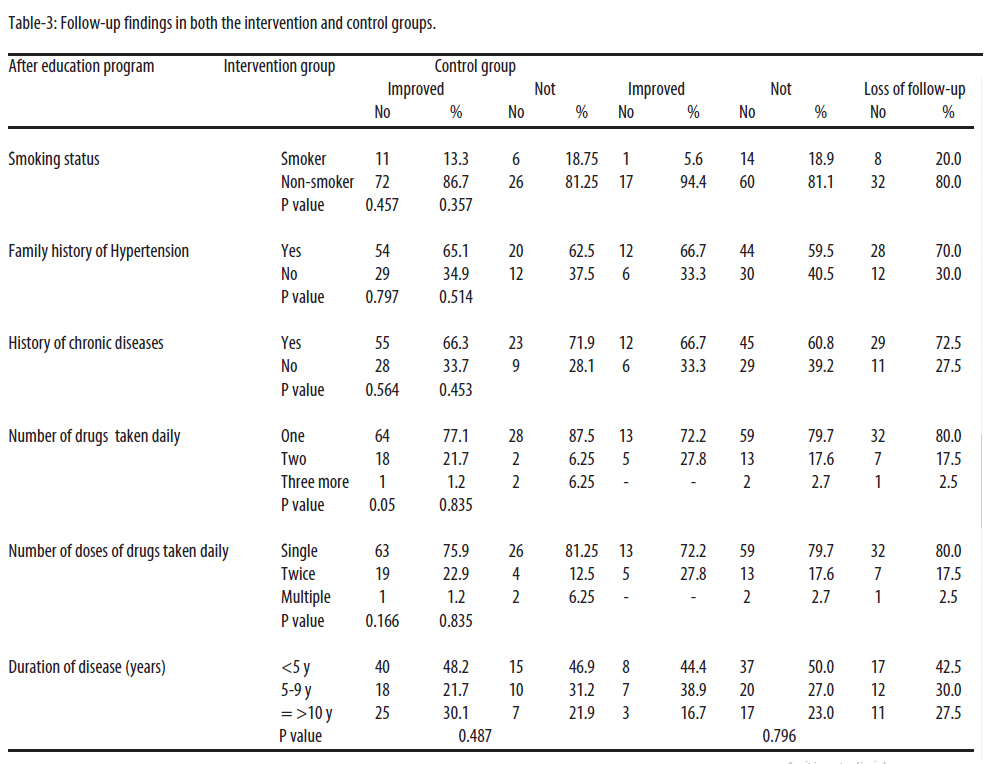 The education session led to increase in the compliance rate significantly, proving the importance of health education in increasing patients' compliance with the medical treatment of HTN.

Disclaimer: None.
Conflicts of Interest: None.
Source of Funding: None.

1. Al-Gareeb AI. Effect of hawthorn extract on blood pressure and lipid profile in patients with stage I hypertension: A placebocontrolled,

Microalbuminuria and left ventricular hypertrophy in patients with essential hypertension