Knowledge, attitudes, and practices among university students in relation to dengue fever: A multi-center study across Vietnamese regions

Objective: Dengue fever (DF) is a serious illness worldwide that can spread rapidly and become a dangerous epidemic. Vietnam is an endemic country affected by the health and economic burden of dengue. This study was conducted to assess the knowledge, attitudes, and practices related to DF among university students across Vietnam.
Methods: A student-based cross-sectional study was performed with a structured questionnaire in Vietnam between July and September 2018. A Chi-square test and Fisher’s exact test were used to compare different issues between two student groups, including medical and non-medical student, and P-values of <0.05 were considered significant.
Results: A total of 1,542 students from universities in Vietnam responded to the survey, which was reflective of 315 medical students learning in public schools, 689 medical students learning in private schools, and 538 non-medical students. The majority of participants had good knowledge on the transmission of DF, good attitudes toward DF, and good practices to prevent the disease. Medical students had better knowledge of the signs and symptoms than non-medical students. However, both student groups' knowledge of signs and symptoms was low.
Conclusion: Quality of education is a key determinant of the knowledge
of the disease, as well as of attitudes and practices. This study supported the government's implementation of intervention projects and DF prevention campaigns and its positive participation in the community.
Keywords: Attitude, Dengue fever, Knowledge, Practice, Student, Vietnam. (JPMA 69: S-96 (Suppl. 2); 2019)

This was a cross-sectional study to assess KAP related to DF among university students and was undertaken from July to September 2018 in Vietnam. As a brief introduction, this country covers a total area of approximately 331,210 square kilometersand had an estimated 96.2 million inhabitants in 2017. 18 Vietnam is the world's 15th most populous country and the 9th most populous country in Asia.18 In addition, education in Vietnam is now trying to integrate with other countries in Southeast Asia and even around the world. Specific evidence has suggested that Vietnam had 235 universities in the 2016-2017 academic year. 19 This confirms that the proportion of university students was not low, and furthermore, students are seen as the frontline in the government's DF propaganda campaign. Therefore, universities are a key priority to investigate the KAP level in Vietnam. The present study implemented a survey across Vietnam that particularly was concentrated in large cities, where many universities in the country are located. Inclusion criteria for this study were age 18 years and above and being undergraduate students in Vietnam. Exclusion criteria were a reluctance to participate in the study, and people who were foreigners, mute, or deaf, did not communicate in Vietnamese, or have been suffering from DF. All participants voluntarily answered a standard questionnaire and were not previously provided the answer.

A single population proportion formula (20) was used to estimate the minimum sample size (N) by taking the proportion of good KAP regarding dengue (P=0.5). The following assumptions of a 95% confidence interval

By adding 10% for a non-response rate, the estimated target sample size was 423 study participants. Then, a systematic random sampling technique was used to choose the study participants, and the sample size was proportionally distributed across Vietnam. In fact, this study collected 1,542 samples to increase credibility in the research process. The KAP questionnaire used in a previous study by Dhimal et al. 21 was adapted for the current study. In the following stage, it was modified for content, wording, and cultural appropriateness conforming to research in Vietnam and ensuring that participants could easily comprehend it. The questionnaire was pre-tested with 200 participants in Ho Chi Minh City, the largest city in Vietnam, to evaluate for timing, interpretation, and clarity of questions and instructions. The data were collected from 200 participants using a set of validated and pre-tested questionnaires to facilitate the primary interviews and were not included in the final analysis. Running Cronbach's alpha, items were extruded if they had a coefficient less than 0.3 or if the Cronbach's alpha of a deleted item was larger than the current Cronbach's alpha. Therefore, from the original 45 items, this study was finalized at 40 items for the standard questionnaire. This standardized questionnaire began with a preamble of the study, was separated into four sections, and it took 10-15 minutes to administer, with external assistance not permitted. For analysis, the first section focused on the socio-demographic characteristics of the respondents. Likewise, the second section, which contained 19 items, was designed to explore students' knowledge of DF's route of transmission, signs and symptoms, as well as their misperceptions about DF. The options of the responses were "right," "wrong." In the same manner, the third section consisted of 13 items to assess participants' attitudes toward DF and was designed as a five-point Likert scale ranging from 1= "strongly disagree" to 5= "strongly agree" with a mid-point of "uncertain." Finally, the fourth section collected information on practice to prevent DF and comprised eight items presented by dichotomous choice questions. A minimum of Cronbach's alpha of 0.7, 0.65, and 0.7 for knowledge, attitude, and practice, respectively, was considered to reflect acceptable internal reliability.22 In order to assemble the exact information from participants, the questionnaire was practically administered through face-to-face interviews and groups interviews by the research assistants. All members of the data collection team were recruited and experienced a professional brief training prior to the actual study, and to avoid unfairness, no correct answers to the survey questions were provided. The study subjects who met the inclusion criteria but were not eliminated by the exclusion criteria stated above were enrolled at the universities, parks, commercial centers, and elsewhere. Before answering, participants were given and explained the study aims, risks, and benefits of joining this study. Once approved, the interviewers proceeded with a structured interview assisted by a validated questionnaire. The completeness, consistency, and accuracy of the collected data were examined by principal investigators on a daily basis.

The data were subsequently imported into and analyzed in SPSS® software version 20.0 (SPSS, Chicago, IL, USA) from the completed questionnaires. The KAP level ("good" or "poor") between socio-demographic characteristics groups as well as between groups of students were compared using a chi-square test and a fisher’s exact due to skewed distributions. In short, with respect to knowledge questions, each correct answer was scored one point. This study pooled incorrect answers with "do not know" responses and scored them with a zero. For the fivepoint Likert scale in the attitude section, if the response was either 1, 2, or 3, they were given zero points, and if the answer was 4 or 5, they were scored one point. In the preventive measures against DF section, a "yes" response was given a score of one whereas a "no" response was given a score of zero. The KAP score was computed as the sum of participant responses, and based on this, participants' KAP levels were defined as "good" or "poor" based on an 80% cut-off point.21 A P-value of 0.05 or less was used to indicate statistical significance.

The study protocol was approved by the Faculty of Pharmacy of the University of Medicine and Pharmacy at Ho Chi Minh City. Undergraduate students were invited to participate, and participants were also informed about the voluntary and anonymous basis of the participation. Those who agreed to participate were required to sign an informed consent form, and they were free to leave out questions if they did not wish to answer. 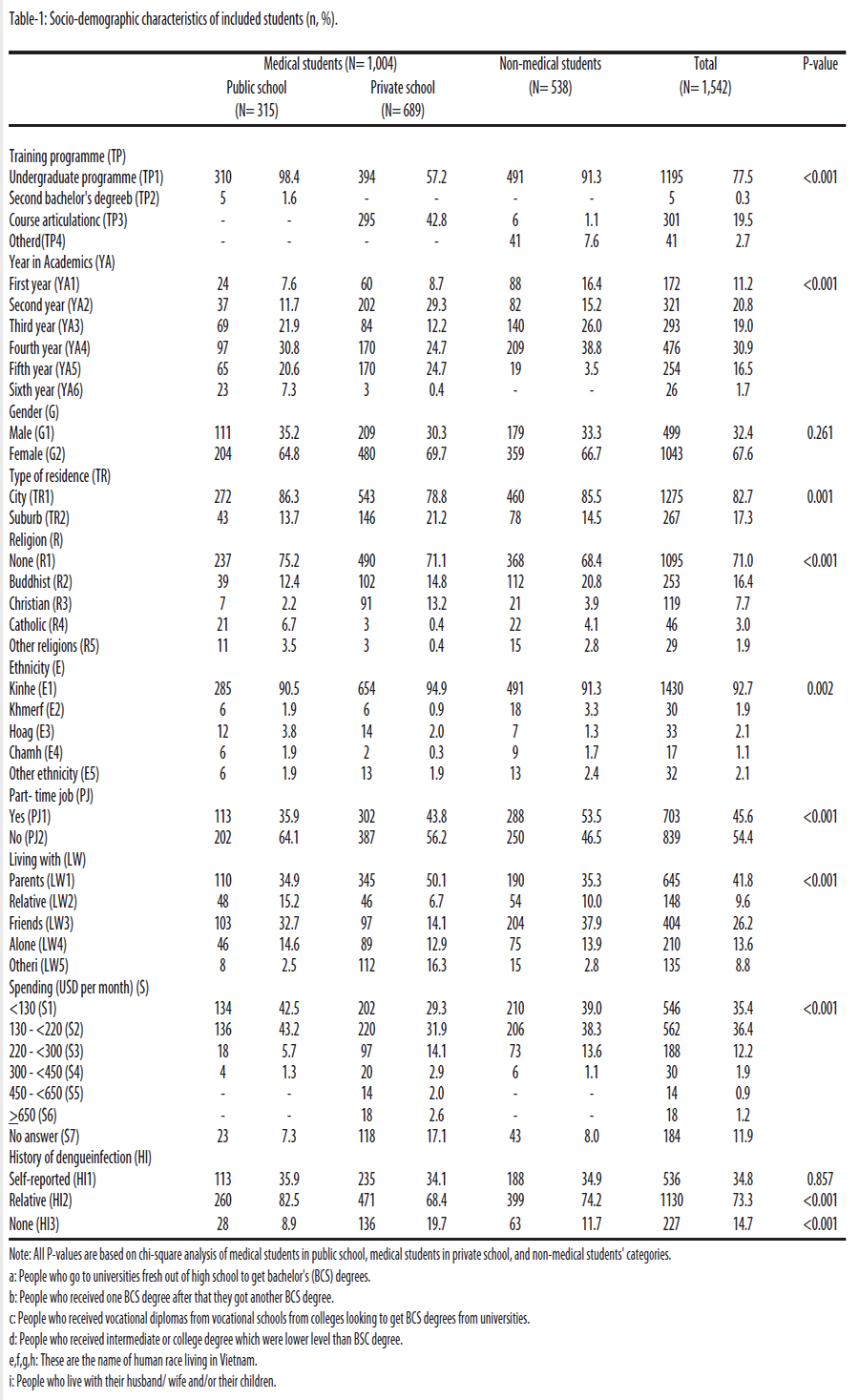 The correct answers from the knowledge section, the positive behaviour toward DF, and the "yes" responses regarding DF preventive practice are respectively presented in Table-2, Table-3, and Table-4. Table-5 provides the study subjects' KAP scores and KAP levels (good or poor) according to different characteristic variables (Table 2, Table 3, Table 4, and Table 5). 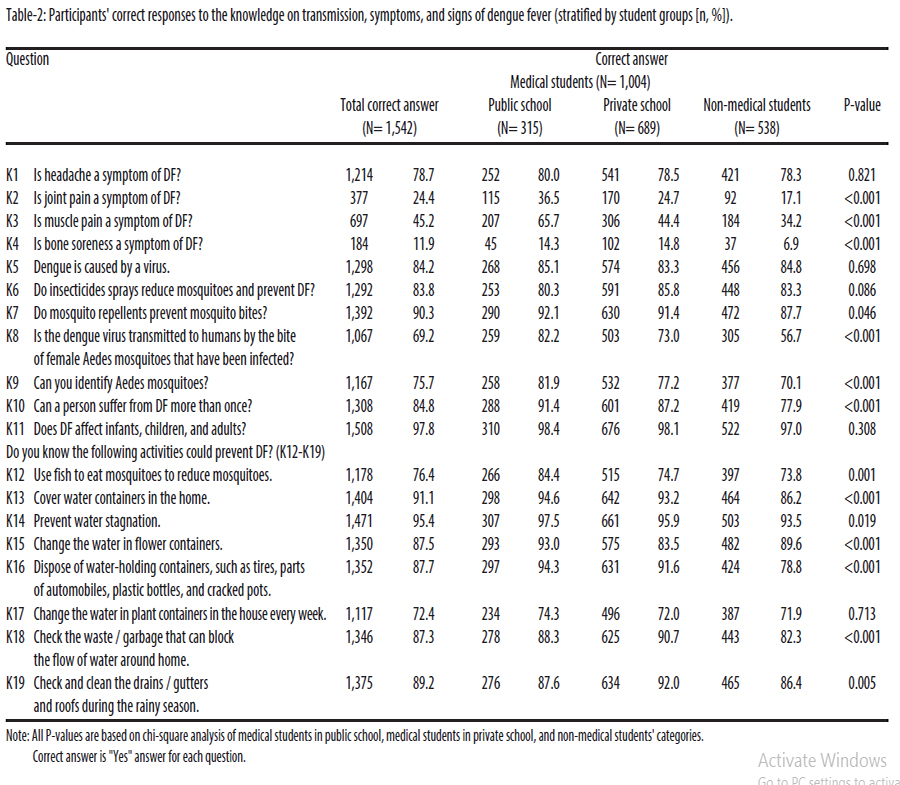 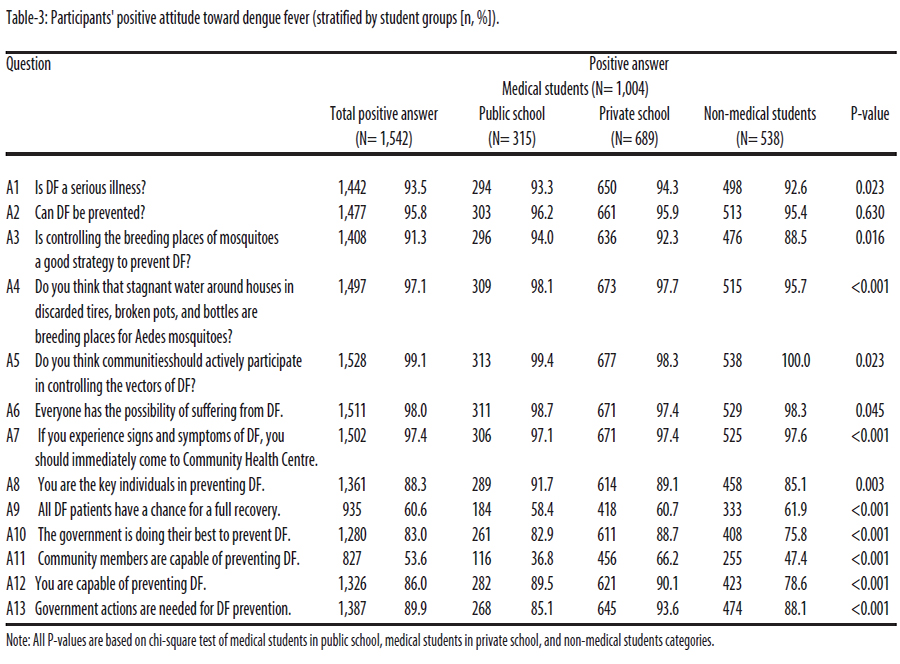 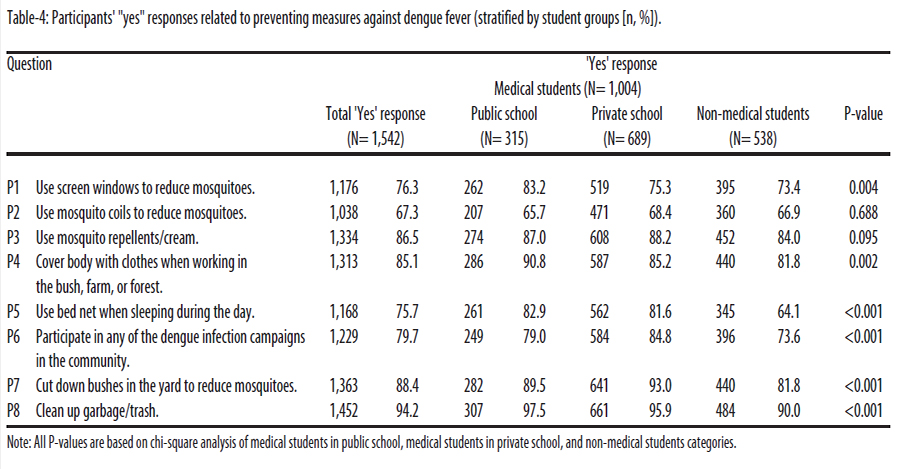 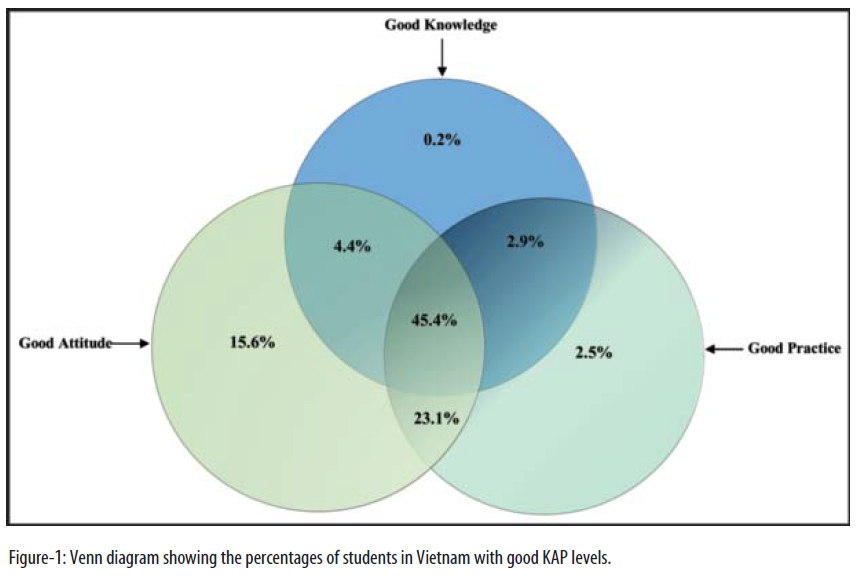 Figure-1 reveals the rate of students with good KAP levels and the relationships among the students' rates of having good knowledge, good attitude, and good practice. 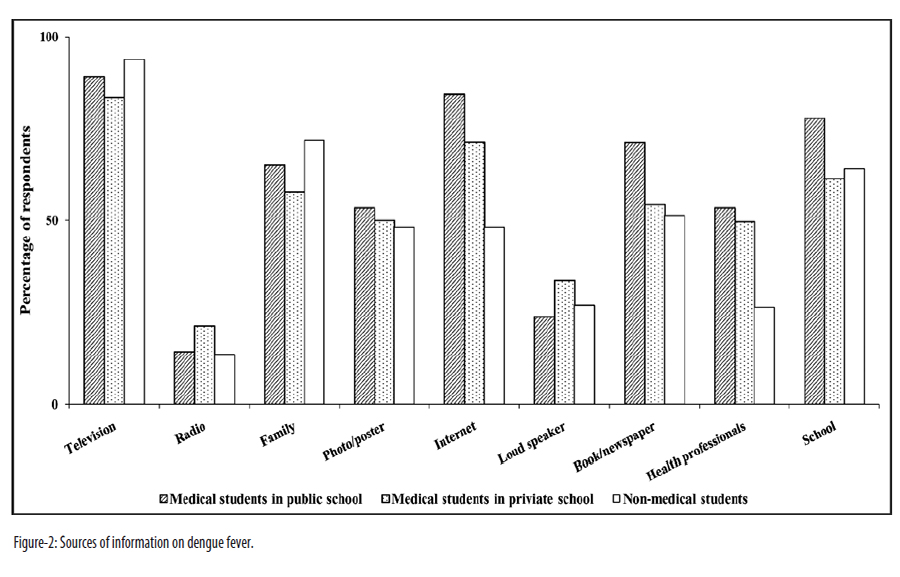 Figure-2 shows sources of information that have provided participants with issues related to DF. dengue can be a central tool in forming dengue interventions and educational materials. This survey helped elucidate the knowledge of and attitudes toward DF held by Vietnamese undergraduate students and appraise the participants' prevention measures against this disease. The results from the current study indicate attitude and practice are positively associated with knowledge scores. Among the 1,542 participants interviewed using the structured questionnaire, 20.4% were medical students learning in public schools,

The issue that emerged in this study is the participants' lack of knowledge regarding DF. As a result, it is concluded that educational interventions are important and should be implemented to address the adequate knowledge of populations. However, this study has demonstrated that behaviour is one of the prerequisites for the success of campaigns aimed at controlling the spread of DF. Future studies could be aimed toward determining the need to establish a sustainable awareness campaign concerning the prevention of DF in student communities and could further emphasize the importance of a nationwide population-based screening prevention programme across Vietnam.

Acknowledgment: The authors acknowledge the students who voluntarily participated in this study. They express their gratitude to all staff at Professional Healthcare Management, Education and Research Center (ProHES) for their support.
Disclaimer: None to declare.
Conflict of Interest: None to declare.
Funding Disclosure: None to declare.

Dengue fever in Southern of Vietnam: A survey of reported knowledge, attitudes, and practices