Hypoglyceamia cases in diabetic patients with insulin and oral hypoglycemic agents: A retrospective research in a secondary health facility

Objective: In Vietnam, prevalence of diabetes in adults is estimated at 5.5% and the total cases of diabetes in adults was over 3,5 million in 2017. Hypoglycaemia is one of the most-observed adverse reaction associated with the consumption of insulin and oral hypoglycaemia agents. The objective is to report the hypoglycaemia cases in type 2 diabetes mellitus (T2DM) patients with
medication therapies attending a secondary health facility.
Methods: We conducted this retrospective research on 1,006 T2DM patients at Lam Dong General Hospital, Lam Dong province in three years between 2016 and 2018 using ICD-10 code of E11. A total of 523 eligible T2DM patients were enumerated to select hypoglycaemia cases while treated with insulin therapy or oral intake of hypoglycaemia agents. Information were extracted from hospital electronic databases, sensitive information was coded.
Results: Among 523 eligible T2DM patients, 92.4% (n=483) patients experienced at least one symptom of hypoglycaemia. The mean age of the selected patients was 51.2}5.2. Females were dominated by males in terms of number. Frequency of hypoglycaemia symptoms was 0-1 time per week for most of patients. The main hypoglycaemia symptoms that most of patients with T2DM suffered were sweating and drowsiness (83% and 70% respectively). Seizures, headache and loss of consciousness accounted for lowest percentages.
Conclusion: The frequency of hypoglycaemia in T2DM patients in Lam Dong General Hospital was very high. Physician
consideration and patient education are necessary in hypoglycaemia management.
Keywords: Hypoglycaemia, Diabetes, Insulin, Vietnam. (JPMA 69: S-75 (Suppl. 2); 2019)

Diabetes mellitus (DM) becomes a worldwide consideration, especially in developed countries. Type-2 diabetes mellitus (T2DM) has been encountered in younger age, which associated with fatty diet and lack of exercises. International Diabetes Federation (IDF) assessed the prevalence of DM diabetes mellitus (DM) among 425 million individuals all over the world. In Vietnam, prevalence of diabetes in adults is estimated at 5.5% and the total cases of diabetes in adults was over 3,5 million in 2017.1 T2DM is increasing in terms of its prevalence at a rapid pace due to older age, decreased physical activity and increase in obesity. 2 From the release of the first hypoglycaemia agents, medication therapies in T2DM treatment have developed significantly. Oral hypoglycaemia agents and insulin have performed their efficacy in plasma glucose concertation stabilization. Besides being effective, these drugs cause a range of adverse reactions, including hypoglycaemia. Hypoglycaemia is a diabetic complication which results in the shape of neuroglycopenic symptoms or at times death if not managed appropriately. T2DM has also an association with macrovascular, microvascular and neuropathic disorders. 3 The brain becomes neuroglycopenic during hypoglycaemia and it also promotes epinephrine secretion & norepinephrine including glucagon that has relevance to casdiovascular diseases (CVD) effects by rapid production response. There are no such signs of this situation and diabetes type has a positive role to play in the event of severe hypoglycaemia frequency. 4 There are one and three events for the T1DM patients in a year; whereas, for T2DM 0.4 and 0.7. T2DM may also have a value of three as well. Previous research studies also report an event of 1.7 percent & 1.8 percent for episodes of hypoglycaemia. 5,6 Hypoglycaemia among T2DM patients may also contribute to the clinical outcomes compromised situation as a result of delayed or missed treatment of insulin. 7-9 Another reason for events of hypoglycaemica is also known as overdose of medication such as insulin. Majority of the T2DM patients also follow lifestyle modification with oral intake of metformin in order to control the level of glycaemia as a first-line therapy. By contrast, as an eventual strategy good glycaemic control management among T2DM needs intensification of management. Old age, pregnancy and renal failure cases are at an increased risk of severe hypoglycaemia. 10-11 The objective of this study was to report the hypoglycaemia cases in T2DM patients with medication therapies attending a secondary health facility.

A retrospective study was conducted using an electronic database at Lam Dong General Hospital, Lam Dong province during the three-year period between 2016 and 2018. Lam Dong General Hospital is a secondary governmental hospital serving both the urban and rural population in the highland area of central southern Vietnam. The hospital has a capacity of 700 beds with 658 staffs, including 124 physicians, 267 nurses and 267 healthcare staffs (unpublished data). Recorded information from 2016 to 2018 was extracted from the hospital electronic database using International Classification of Diseases Tenth Version (ICD-10). 12 A total of 1,006 patients with the ICD-10 code of E 11 was enrolled. Outpatients; patients who do not comply with the treatment protocol and voluntarily discontinued treatment; those with unclear or missing medical record information; patients with hepatic failure, excessive alcoholism, renal failure or cardiac failure, were excluded. Of these, 523 patients' information was reviewed one by one to include the patients who suffered from hypoglycaemia when treated with insulin or oral hypoglycaemic agents (OHA) or combined therapies. In the end, 483 patients who fulfilled the entire criteria were included in this study. Symtomatic hypoglycaemia is defined among patients with diabetes as the decrease of blood glucose level below 3.3 mmol/L (60 mg/dL). 13
Statistical Analysis: All statistical analyses were performed using Microsoft Excel 2016. Descriptive statistics (frequency, percentage, mean and standard deviation) were used to summarize data on demographic characteristics; duration and frequency of hypoglycemic symptoms; and prevalence of hypoglycemic symptoms among T2DM patients. This research protocol was approved by the Lam Dong General Hospital, Lam Dong province. Sensitivity information was coded to insure the anonymity. The whole data was used for research purposes only.

After screening based on included and excluded criteria aforementioned, there were 483 patients chosen among which most were between the age of 51 to 59 years (mean: 51.2}5.2) and the percentage of males was slightly higher (57.6% vs 42.4%). Nearly half of participants were in the normal range of BMI (Body Mass Index). Participants with no complications had a diabetes duration of 9.3 years with a HbA1c between 5.7 to 8.9. Hypoglycaemia, was related to OHAs (oral hypoglycemics agents) in one-third patients 156 (32.3%), followed by insulin 87 (18%) and the combination of insulin and OHAs 65 (13.5%). Approximately 337 (70%) patients affirmed that they could recognized their hypoglycaemia symptoms. The demographic characteristics are expressed in Table-1. 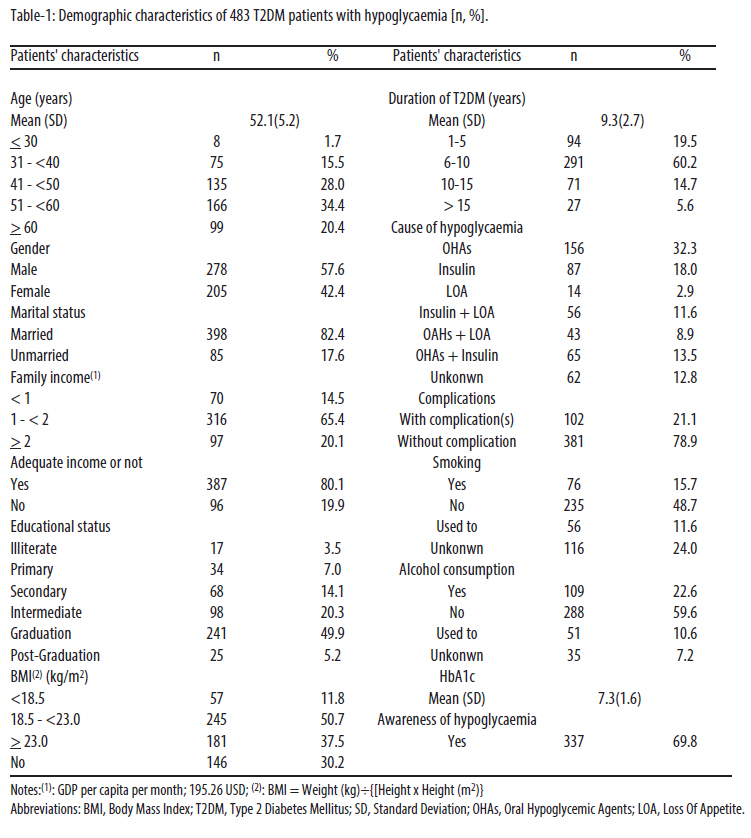 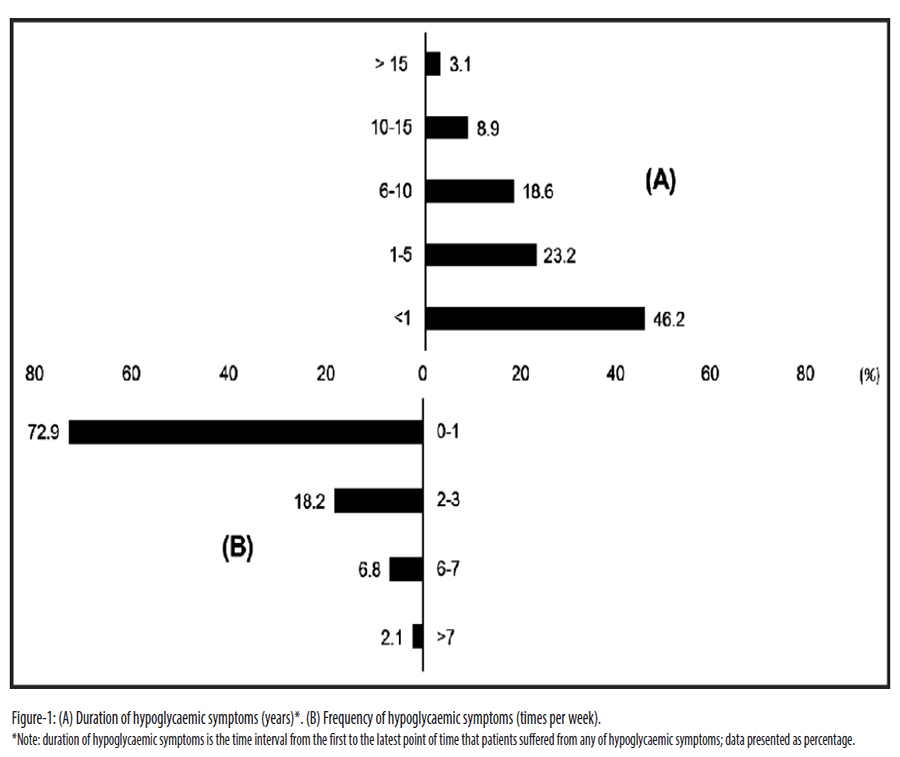 The main hypoglycemic symptoms that most of patients with T2DM suffered were sweating and drowsiness (83% and 70% respectively). Half of the patients got features such as dizziness, weakness, aggression, confusion and excessive hunger in their time-life. Seizures, headache and loss of consciousness accounted for lowest percentages among patients (each below than 25%). Prevalence of hypoglycaemic symptoms among T2DM patients in Vietnam was presented in Figure-2. 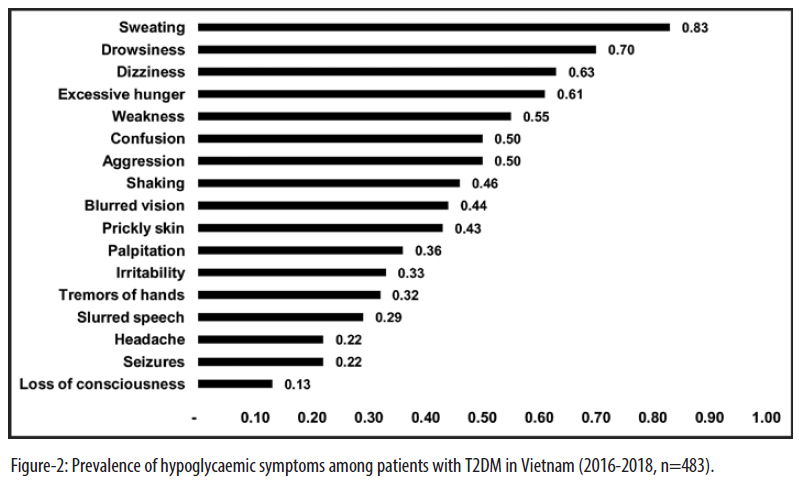 This was a three-year retrospective study conducted with the objective of finding the characteristics of T2DM patients who suffered from hypoglycaemia during admission and hospitalization. Among 523 eligible T2DM patients, 483 (92.4%) patients experienced at least one symptom of hypoglycaemia. This percentage was similar to the latest studies in Chennai (India)14 and Petaling Jaya (Malaysia),15 which were 96% and 82,7% respectively. These numbers were extremely higher than those reported by American Association of Clinical Endocrinologists. Thereby, 55% among 2,350 Americans with T2DM reported having experienced hypoglycaemia. Background characteristics of patients in this study were similar to the two latest studies from India and Malaysia. The mean age of participants in Malaysian study was 62.5}12.2 years,15 higher than in this study (52.1}5.2). The Malaysian authors also found that age was significantly associated with severe hypoglycaemia (p<0.05). Barnett AH (2010)16 and Umpierrez GE (2011)17 reported the same results in their studies. According to Alagiakrishnan K (2010), the aging process became less effective in hypoglycaemia prevention. 18 Moreover, hypoglycaemia response in elderly people became weak and the symptoms usually were severe. Diminished autonomic symptoms such as fatigue and headache resulted in late diagnosis of hypoglycaemia. The majority in the both Malaysian and Vietnamese participants were neither smokers nor alcohol-drinkers. In 2013, Ahren B explored alcohol consumption as one of contributing risk factors for hypoglycaemia.19 The others indentified risk factors were sulphonylurea therapy, missed meal, delayed exercise and medication irregularly. Most of patients in Vanishree S's study had T2DM for a duration of equalor less than 10 years (61.2%). similar to those in this study (79.7%). However, a half of Indian patients had experienced hypoglycaemia for 1-5 years, while 46,2% Vietnamese patients had experienced hypoglycaemia for under one year. Vietnamese participants, however, suffered from hypoglycaemia more frequently (0-1 times per week, 73%) than those in India (rarely, 51%). The frequency of hypoglycaemia in T2DM depends on the degree and the type of diabetes management. Bahijri S (2013) reported that among those who received the standard diabetes management, the frequency of mild hypoglycaemia was 1.5 episodes per patient per year and the frequency of severe hypoglycaemia was 0.02 episodes per patient per year. 20 The prevalence of hypoglycaemia symptoms in the two studies were slightly different from each other. In India, weaknesses was the most-observed symptom (76.2%) whereas seizure was the least-observed (0,8%). These figures in this study were 55% and 22% respectively. Vietnamese patients experienced most from sweating (83%) and least-experienced from loss of consciousness (13%). In this study, the main cause of hypoglycaemia was OHAs (n=156, 32.3%). This finding was different from the others. The Malaysian study found insulin intake on admission and during hospital stay to be the main cause (n=404, 71.4%). In addition, they proved that insulin consumption was associated with the severity of hypoglycaemia episodes (p=0.0001). The Indian study also found the significant difference on the percentage of hypoglycaemia episodes between the two groups of medication usage: only OHAs versus insulin with OHAs (p=0.003). Insulin was also considered to be associated with the frequency of hypoglycaemia in previous studies. It was indicated by Miller CD (2001) that the prevalence of hypoglycaemic symptoms was 12% in patients on a diet alone, 16% in patients using OHAs alone, and 30% among those using insulin. Severe hypoglycemic symptoms, moreover, were observed only among patients using insulin. 21 This study has limitations that should be considered. Although severities (mild, moderate, severe) is one of themost important parameters in hypoglycaemia assessment, this study could not document it, due to the shortage of information. The study subjects were diagnosed to have hypoglycaemia based on plasma glucose concertation, which was not always measured. In addition, hypoglycaemia occurrence was highly influenced by patients self-monitoring which was very frequent. The subjective symptoms of hypoglycaemia were also easily confused with the other conditions. These symptoms not only occurred in T2DM patients but also in normal individuals. The association between prevalence of hypoglycemia and the risk factors could not been explored. Despite the limitations, this study was the first one to be conducted in Vietnam with the aim of reporting hypoglycaemia cases in T2DM patients. It highlights the percentage of hypoglycaemia in the sample, frequency and symptoms of hypoglycaemia.

This study found that the frequency of hypoglycaemia in T2DM patients in Lam Dong General Hospital was very high. Physicians should consider these findings in their prescription and patients care. It is also important to educate the patients on their self-monitoring, drug compliance an appropriate diet to prevent hypoglycaemia.
Acknowledgment: The author would like to acknowledge the volunteer participants for data collection. No funding was
received for this analysis.
Disclaimer: None to declare.
Conflict of Interest: None to declare.
Funding Disclosure: None to declare.

The economic impact of asthma treatment on patients, 2014-2017: The Vietnamese experience from a public hospital

Non-surgical chronic rhinosinusitis and quality of life: A Vietnamese perspective