Angiographic characteristics and in hospital outcome of young patients, age up to 40 versus more than 40 years undergoing primary percutaneous coronary intervention

Results: Of the 415 patients, 50(12%) were young. Proportion of male was higher among the young (p=0.02) and so was the case with positive family history (p=0.002). The young had lesser cases of diabetes (p=0.028) and hypertension (p=0.034). Single vessel disease was more common among young (p<0.001). No significant difference was observed in post-procedure outcome related to age (p>0.05). Conclusion: Acute Myocardial Infarction in young was more likely associated with male gender, positive family history and less likely with hypertensive and diabetic status.

Acute Myocardial Infarction (AMI) is the most lethal manifestation of cardiovascular diseases (CVDs) and can result in sudden cardiac death. It is considered to be the disease of the old, but the protecting net of young against the AMI has been slowly waved off.1,2 Studies have reported varying rates of prevalence based on the definition of young population, about 1-16% prevalence of MI is reported. 1-9 Potential causes of premature MI are reported to be stressful work environment, excessive workload, sedentary lifestyle, unhealthy dietary habits, smoking and addiction.2,6 Generally, premature MI is associated with relatively good prognosis10-12but economic and social burden of the disease in productive years of life is critical for both family and society. 13 Younger population is considered to be the breadwinner of family, and the aftermath of premature MI not only impacts the patient himself but also multiple family dependents get affected both psychologically and economically. 14 Disease anatomy, risk profile and clinical presentation are different in the young compared to the old. 1 Studies have reported premature MI to be more likely associated with male gender, smoking history, positive CVD family history, and dyslipidaemia, and is less associated with diabetes mellitus (DM) and hypertension (HTN).1,6 Late presentation and ignorance of early symptoms of coronary artery disease (CAD) is more common among young patients, which can be attributed to the false sense of security associated with younger age. 15Unlike the older patients, instead of deteriorating or stable angina, first onset in younger patients rapidly evolves into fully developed MI. 15,16Studies conducted in many parts of  the world have reported the aetiological differences of MI between the young and the old. 1,3 7,17,18 Considering the fact, understanding of differences in risk profile, angiographic characteristics, and the outcomes of primary percutaneous coronary intervention (PCI) for Pakistani population is important. Further, this will help to formulate customised preventive and therapeutic strategies. Therefore, the current study was planned to compare the angiographic characteristics and the outcomes of young patients with those of older patients.

The prospective observational study was conducted at the Catheterisation Laboratory of the National Institute of Cardiovascular Disease (NICVD), Karachi, from December 17, 2016, to June 16, 2017, and comprised consecutive patients aged 18-80 years diagnosed with acute STElevation Myocardial Infarction (STEMI) undergoing primary PCI. After approval taken from the institutional ethics committee, the sample size was calculated using World health Organisation (WHO) calculator version 2.0,19 setting confidence level of 95%, power of test 80%, and anticipated population in-hospital mortality of 0.9% in young patients and 6.1% in the older ones. 17 Those <40 years of age were considered young and >40 years as old. An additional 10% patients were recruited to account for any potential information loss and dropouts. Informed consent was obtained from all the subject s. AMI was diagnosed based on presenting symptoms, cardiac enzymes, and electrocardiography (ECG) changes. Patients with history of any prior cardiac-related surgery were excluded. Coronary angiography (CAG) and primary PCI in all patients were performed by interventional cardiologists with over five years of experience. Post procedure outcomes were recorded for all patients during hospital stay. A structured questionnaire was used after it was cleared by the senior faculty of the institution. Data on demographic, angiographic and procedural characteristics, risk profile, and in-hospital outcomes were recorded for all patients. SPSS 21 was used for data analysis. Mean ± standard deviation (SD) and frequencies and percentages were calculated for quantitative (continuous) and categorical variables respectively. Shapiro-Wilk test of normality was applied for continuous variables and appropriate independent sample t-test or Mann-Whitney U test were applied to compare the differences in younger and older patients on quantitative (continuous) variables. The association of age groups with categorical variables was assessed by using Chi-square test. Two sided p0.05 was taken as statistically significant. 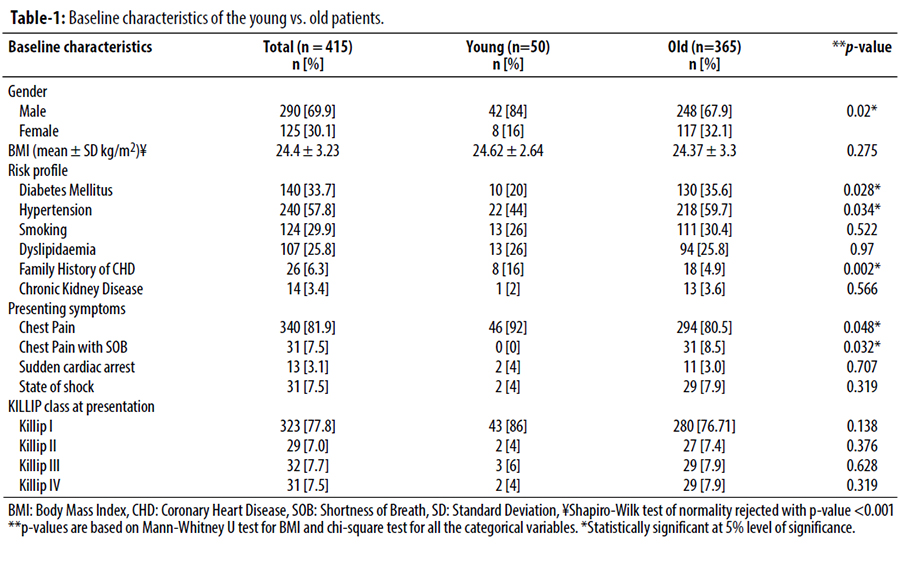 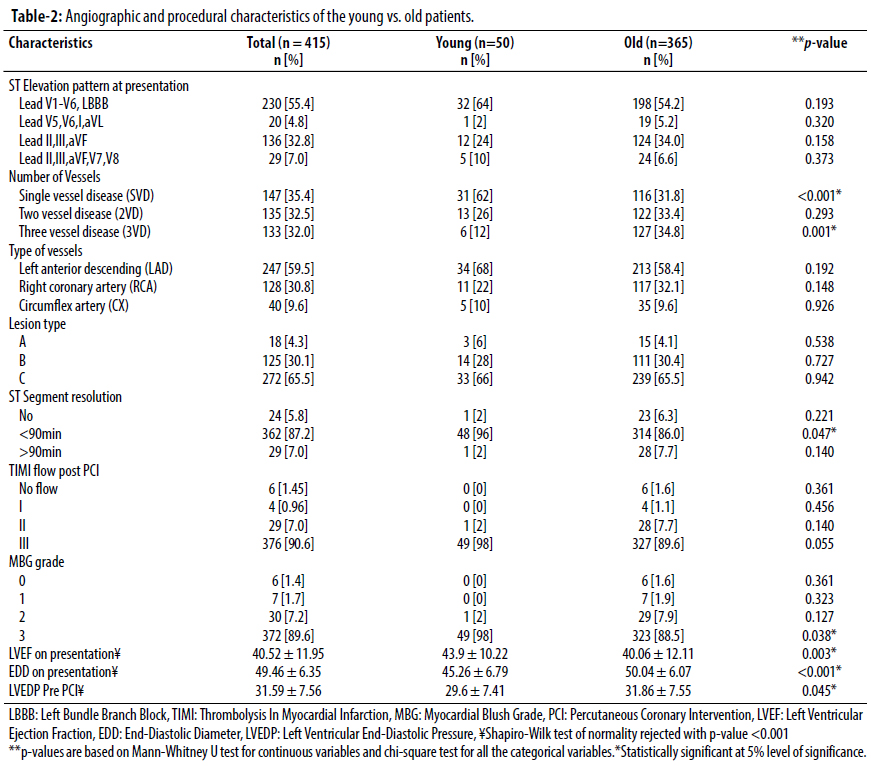 No statistically significant differences were observed between the groups in terms of post-procedure length of hospital stay, complication rate, and in-hospital outcome (p>0.05 each) (Table 3).

The current study was an effort to understand the differences in risk profile, angiographic characteristics and the outcomes of primary PCI in young and old patients presenting with STEMI. Proportion of patients 40 years of age was 12% which is in line with the reported range of 1-16% based on various PCI registries and studies.(1-9) MI in young patients is found to be associated with, male gender, smoking history, positive family history of CVDs, and dyslipidaemia.1,6 The current study found significantly higher proportion of male patients and positive family coronary heart disease (CHD) history amo ng the young which is aligned with the literature1,3,5,6,7,17,18 Besides, history of smoking and dyslipidaemia were found to be insignificant in young patients compared to the old. HTN and DM were less frequent in young patients in our study, which agrees with published data.3,5,6,7,17,18 Past studies on young patients reported that young patients were more likely to have SVD 3,5-8 and in the current study SVD was found in significantly higher proportion of young patients while three vessels disease (3VD) was higher among the old. The current study further revealed that the young patients had early resolution of ST segment, rapidly achieving Myocardial Blush Grade (MBG) 3, higher left ventricular ejection fraction (LVEF), and lower left ventricular enddiastolic pressure (LVEDP) pre-PCI. However, no statistically significant difference was observed between the two groups in terms of ST elevation patterns and infarct-related artery. Despite the evident differences in risk profile and disease anatomy, no statistically significant differences were observed between the groups in terms of post-procedure length of hospital stay, complication rate, and in-hospital outcome. A few studies have reported relatively favourable outcomes for younger patients.5,7,18 Primary PCI is generally considered to be a less risky procedure, but the aggressive nature of the disease and longer life expectancy of younger patients may increase the risk of reoccurrence of coronary events. 3 The current study is limited by its single-centre nature and small sample size. Larger multicentre studies are needed to further investigate the disease behavior among the young in our population.

Primary PCI in premature MI resulted in favourable procedural and post-procedural outcome with relatively lesser complications. Conceiving the psychological and economic burden of premature MI for patients, family, and community at large, it is important to further explore the contributing factors towards premature MI and formulate preventive and management strategies to marginalise the burden of the disease.