Objective: To assess the knowledge and perception of medical students regarding the utility and applications of artificial intelligence in medicine.

Methods: The cross-sectional study was conducted at the Shifa College of Medicine, Islamabad, Pakistan, from February to August 2021, and comprised medical students regardless of gender or year of studies. Data was collected using a pretested questionnaire. Differences in perceptions were explored relative to gender and the year of studies. Data was analysed using SPSS 23.

Conclusion: Medical students, regardless of age and year of studies, were found to have a good understanding of the usage and application of artificial intelligence in medicine.

Artificial intelligence (AI) is defined as the general man-made ability of a computer or machine to imitate and perform tasks previously considered possible only by humans and other intelligent beings.1 AI approaches employing machines to sense and comprehend data like humans. There has been an increased focus on AI in various domains to resolve complex issues which is resulting in a revolutionary shift in healthcare.2

The use of AI in medicine can be classified into two subtypes: virtual and physical.3 The virtual aspect ranges from applications such as electronic health record systems to neural networks‐based guidance in treatment decisions.4 The physical part deals with robots assisting in performing surgeries, intelligent prostheses for handicapped people, and elderly care.5 Recently, AI has been used to predict genetic variations in low-grade gliomas,6 to identify genetic phenotypes in small cell lung carcinoma,7 to decrease false-positive rates in screening mammography by way of computer-aided detection,8 to improve pathological mediastinal lymph node detection,9 and to automatically perform bone age assessment.10 These examples demonstrate the influence of AI in healthcare. The application of AI will be further used in other fields of medicine in the future, leading to fundamental changes in the role of physicians and the way they practise medicine.11

Studies2,12 performed all over the world concluded that AI in healthcare is growing radically and changing the face of healthcare delivery. Each study showed differing viewpoints of participants regarding the use of AI in healthcare. One study showed that students believed that while AI could be used to detect pathologies, they also felt that it could not be used in establishing diagnosis, and that while AI could help revolutionise radiology, it could not truly replace a human radiologist.13 A 2017 study14 also demonstrated that an AI technology, known as convolutional neural network (CNN), was able to detect 92.4% of tumours compared to 73.2% by human physicians.

Some research15 has been carried out regarding the feasibility of the use of AI in medicine in Pakistan, but no study has explored the views of medical students regarding the emerging field. The current study was planned to assess undergraduate medical students’ knowledge and perception towards AI use in medicine, and to see if there are differences related to gender and year of studies.

The cross-sectional study was conducted at the Shifa College of Medicine (SCM), Islamabad, Pakistan, from February to August 2021. After approval from the institutional ethics review board, the sample size was calculated using the World Health Organisation (WHO) calculator,14 with 95% confidence interval (CI), anticipated population proportion 50%, and absolute precision 5%. Due to non-availability of any statistics on the said subject, an arbitrary value of 50% was taken for the anticipated population proportion in calculation of sample size.

The sample was raised using simple random sampling technique. A sampling frame comprising 500 SCM students was made from which the required number of participants were selected through computer-generated table of random numbers.

Those included were medical students regardless of gender or year of studies. Written consent was obtained from each participant, and those who declined to participate were excluded. Data was collected using a predesigned questionnaire that was generated in line with literature.2,12,13 It was uploaded on Google Forms and its link was shared with the participants. The questionnaire had 23 items which the students were asked to respond to on a five-point ordinal Likert scale (1=strongly disagree to 5=strongly agree). Besides, there were 9 questions in the multiple-choice question (MCQ) format with three options. The first part of the survey asked about the student’s attitude towards the medical application of AI and consisted of 7 items and 6 MCQs. In the second section, attitudes regarding the medical fields in which AI could be applied were explored. This section had 9 items. The last section contained 4 items and 3 MCQs about the possible risks that might arise with the use of AI in healthcare.

Cronbach’s alpha value for the questionnaire was satisfactory (α=0.84), and so were the values for awareness (α=0.80) and attitude (α=0.88) subscales.

Familiarity with AI was high 221(56.7%). Many participants considered AI to have a useful application in the medical field 327(83.8%). Majority of the respondents 226(57.9%) agreed that the biggest advantage of using AI in healthcare was its ability to deliver vast amounts of clinically relevant data and therefore speed up the processes in healthcare. 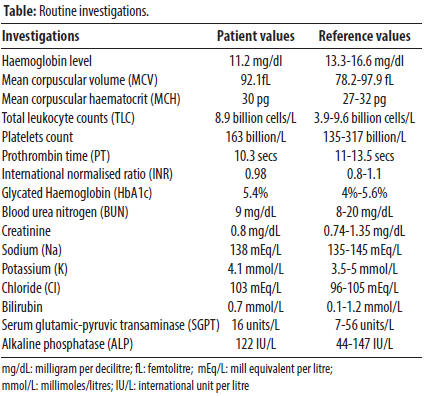 Students studying in different years of medical school agreed that AI has useful applications in the medical field, with fifth year students agreeing the most 105(88.6%) and third year students agreeing the least 24(80%) (p=0.31). When asked if the diagnostic ability of AI is superior to that of a human doctor, participants from all five academic years disagreed with the statement, with first year students making up the majority of this response 54(44.6%) (p=0.84). Similarly, all participants answered that they would not always rely on AI in making medical decisions in the future, with fourth year leading the way 39(53.4%) and second year scoring the least 52(42.6%) (p=0.17). The majority of first year 46(38%) and second year 45(36.9%) students chose to remain neutral when asked if AI should be used in surgical treatment. The remaining students from third to fifth years agreed to such a use of AI (p= 0.89). However, there was a significant difference in opinion among the students of various years regarding their attitude towards AI if their medical opinion differed from an algorithm, with majority of the students 238(61%) trusting doctor’s opinions more than AI’s judgment (Figure).

The current study showed that 40.5% participants disagreed with the notion of AI being superior to human doctors in terms of diagnostic abilities, of which majority were males (55.7%) and female participants were equally divided between disagreeing and choosing to stay neutral (p=0.12). This is in contrast to a previous study which showed the majority of participants agreeing to the diagnostic superiority of AI compared to humans.11 The reason for the low agreement rates from the current participants could be due to lack of awareness of the application and accuracy of AI in diagnostic procedures since the participants in the aforementioned study11 were practising physicians who were more familiar with the uses of AI in the medical field.

When asked if AI could potentially replace doctors in the future, the vast majority of participants (66.7%), including males and females, disagreed (p=0.02). These findings are in line with a previous study.16 An editorial by Krittanawong17 also stated that AI was unlikely to replace physicians in the foreseeable future.

Majority of the current participants (67.2%) believed that AI is not flexible enough to be applied to every patient, which is in line with earlier findings.11 In addition, the great majority of participants (86.7%) agreed that AI had a low ability to take care of the emotional wellbeing of patients. This finding backs assertions by Krittanawong.17

More than 50% participants agreed that AI should not be used to make medical decisions. It is worth noting the large number of participants (48.7%) who took a neutral stance on the issue. These findings are in line with earlier research.11

An overwhelming majority of the students were of the opinion that the knowledge and experience possessed by AI could not match that of a doctor, which is in contrast with reported findings.11 The belief that AI lacks in knowledge and experience may be due to the students’ own lack of awareness in machine-learning protocols and the ability of AI to learn and improve its decision-making skills with experience. In a way, this ability is greater than that of a doctor as AI can access hundreds of past cases and scenarios through the electronic medical record and store this data for future use much more efficiently than a human brain can.18 A deep neural network (DNN) is an artificial neural network with more than 5 layers of artificial neural units that allow for improved predictions, especially as the dataset increases.18 Even though 56.7% participants agreed to have a good AI familiarity, this lack of awareness about the deeper aspects of AI suggests otherwise.

Most of the study participants (73.6%) agreed that AI has uses in monitoring the health of admitted patients, with 82.1% of males and 67.1% of females holding this opinion. A question pertaining to health monitoring has not been properly explored yet, but this can be easily explained by the abundance of chatbots and apps that are already in use to monitor patient health at home.19-21

Patient autonomy is a topic that most of the subjects agreed on (64.6%), with 66.7% of males and 63.1% of females agreeing that patients should always be given a choice as to who would make their diagnosis; an AI programme or a human physician. This is a finding is in contrast with a study in which only 4.6% participants said they would put the question to the patient in case of a difference in opinion between the AI and the physician.11  This change in opinion may be due to the difference in ethical practices between a student and a physician. The participants in the earlier study11 were physicians who would have a difference in ethics, as well as having multiple years of experience to further boost their stand on their own opinion. On the other hand, students would have a more idealistic view, and would value the patients’ opinion more.

In the current study, the majority of students across all years of medical school demonstrated an enthusiasm towards AI, and agreed that AI had useful applications in the medical field, with final year students agreeing the most, and third year students the least. Moreover, most participants from all classes were of the view that if there is a difference in the AI diagnosis of a disease and the doctor’s diagnosis, they would go with the doctor’s opinion. Since no such study has been done to assess the views of medical students studying in different years of medical school on the use of AI, this can point towards a future avenue of research and exploration.

The current study has some limitations as it was done at a single centre and there was less participation from students of clinical years due to lesser availability of such students. Further studies should involve subjects studying in various fields of medicine and in different areas of Pakistan.

It is important that medical students get well-versed with the future AI advances and the new territory the world of medicine is heading towards. It was evident that medical students, who are the future doctors, did not want to rely solely on AI to make decisions regarding patient management, and so the end goal should be to strike a mutually beneficial balance between effective AI use and the human strengths and judgments of trained primary care physicians. With the role of AI gradually increasing in healthcare, it is essential to have proper education regarding the usage of AI in data management, monitoring of patients and performing diagnostic tests.

Disclaimer: The Abstract was presented at the Shifa College of Medicine Scholar’s Day 2021.

High-riding innominate artery in the neck: A hazardous presentation during surgery

The causes and complexities of induced abortion in Pakistan