Enteric fever is a highly fatal infectious disease that can present with extensive symptoms that renders diagnosis quite risky. Multi-drug resistant Salmonella typhi infection has become endemic in third world countries and has been routinely associated with catastrophic complications and even death, with diagnostic and therapeutic impedance. Typhoid fever is known to cause life-threatening cerebral complications. We report the case of a 16-year-old male who presented to us with a high-grade fever, watery diarrhoea, altered level of consciousness, and a mixed dark-coloured crusted oral lesion. Blood workup showed neutropenia, lymphocytopenia, thrombocytopenia, transaminitis, and hyponatraemia. Blood culture grew multi-drug resistant Salmonella Typhi. CT scan of the brain showed diffuse cerebral oedema, while EEG was consistent with the diagnosis of diffuse encephalitis. The patient responded well to culture-sensitive antibiotics, while the oral lesion showed a dramatic response to presumptive antifungal treatment. We discuss the compositions available to date on typhoid-associated encephalitis and the connection of fungal infection in this specific case attempting to promote awareness regarding possible unorthodox presentations of enteric fever.

Typhoid fever is one of the most prevalent infectious diseases in Pakistan.1 It remains a significant cause of morbidity and mortality due to diagnostic uncertainties, atypical presentations, and frequent complications. The most common symptoms of typhoid include stepladder pattern fever, nausea, vomiting, abdominal pain, anorexia, diarrhoea, and occasionally constipation.2 Typhoid fever commonly produces several complications. It can involve almost any organ of the body causing typhoid encephalopathy, focal neurologic deficits, ventriculitis, psychosis, seizures, cerebral abscesses, and myelitis via CNS involvement; intestinal haemorrhage and ileal perforation from the involvement of the gastrointestinal tract; septic arthritis and osteomyelitis from the invasion of bones and joints; pneumonia, empyema, bronchopleural fistula and lung abscesses from pulmonary seeding; and even myocarditis, nephritis, hepatic, and splenic abscesses from septicaemia.2,3 These complications may eventually culminate into multi-organ failure from this invasive infection.3 Multi-drug resistant typhoid is defined as Salmonella typhi infection resistant to all three first-line universally recommended antibiotics (Chloramphenicol, Ampicillin, and Trimethoprim-Sulfamethoxazole) for the treatment of enteric fever.4 It has been shown that multi-drug-resistant typhoid infection is associated with a higher complication rate than those sensitive to most antibiotics.5 Having said that, typhoid fever represents a clinical entity that can lead to an extensive array of disease manifestations that necessitates physicians to have a high level of knowledge and awareness of a vast range of atypical presentations, particularly those practising in third world countries with poor sanitary and crowded living conditions where enteric fever remains an endemic infectious disease.

A 16-year-old male, a known case of generalised tonic-clonic epilepsy on treatment with Carbamazepine, presented in the emergency department of Dr Ruth K. M. Pfau Civil Hospital, Karachi, Pakistan, on November 3, 2020, with a fluctuating high-grade fever and non-bloody watery diarrhoea for one month (four to seven episodes per day) and altered level of consciousness for one day. He also had a few episodes of non-bilious, non-bloody vomiting before presenting to our healthcare centre. On arrival, the patient had a toxic appearance with a heart rate of 96 beats per minute and was hypotensive with a blood pressure of 75/50 mm Hg, tachypnoeic to 34 breaths per minute, and febrile to 102oF. The abdomen was soft, non-tender with evidence of mild hepatosplenomegaly along with hyperactive bowel sounds. Cardiac and pulmonary system examinations were normal. Neurologic examination showed a Glasgow coma scale score of 13 (Eye 4, Motor 5, Verbal 4) with down-going plantars bilaterally and no signs of meningeal irritation. Oral examination demonstrated dry and desiccated tongue and palate coated with mixed greyish-black crusted material. Blood work done on day one of presentation showed normocytic normochromic anaemia, leukopenia with an absolute neutrophil count of 1224 cells/µL and absolute lymphocyte count of 408 cells/µL, thrombocytopenia, and transaminitis with SGPT and SGOT levels of 381 and 403 U/L, respectively. The urinalysis and culture were unremarkable. Stool detailed report showed loose consistency stools with 4-6 pus cells/HPF.

The patient was hydrated and treated with Paracetamol 1 gram IV as required six-hourly, Ceftriaxone 2 grams IV once daily, and Levetiracetam 500 mg IV twice daily (Carbamazepine was stopped due to marrow suppressive effects and potential for hepatotoxicity). During the initial hospital stay of 4-5 days, the patient remained febrile with high-grade fever along with waxing and waning mental status. The delirious symptoms worsened and ranged from confusion and aggressiveness towards visual hallucination, restlessness, rigidity, tremulousness, irritability, screaming, and inability to speak and sleep, that needed pharmacologic intervention. The Departments of Psychiatry and Neurology were consulted to assess neurologic status and consideration for further investigations. One-hour EEG demonstrated sharp slow waves more prominent over the frontal and temporal regions showing generalised cortical hyper-excitability consistent with the diagnosis of diffuse encephalitis. CT scan of the head was also obtained given the worsening mental status, which demonstrated mild diffuse cerebral oedema with blunting of sulci and gyri, loss of grey-white matter differentiation, and slit-like lateral ventricles. CT scan image revealing cerebral oedema is shown in Figure 1. 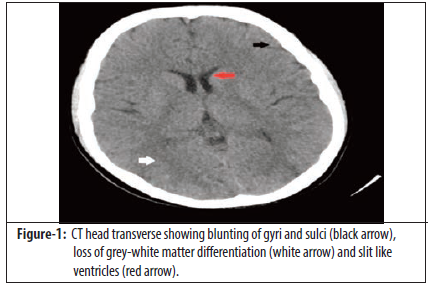 Lumbar puncture was not performed because of low platelet count (<40,000/µL) despite the suspicion of HSV encephalitis due to neurologic symptoms with the oral lesion. Blood culture grew multi-drug resistant Salmonella typhi sensitive to Azithromycin, Meropenem, Imipenem, and Fosfomycin; the antibiotic treatment was then switched from Ceftriaxone to Azithromycin (500 mg once daily) plus Meropenem (1gm 8 hourly) as per the culture sensitivity and given the high prevalence of resistant cases of typhoid in Pakistan. A day or two after the change of antibiotic therapy based on culture sensitivity, the patient’s mental status started to improve, fever and diarrhoea subsided, followed by improvement of vital signs and laboratory abnormalities, including the resolution of leukopenia, thrombocytopenia, transaminitis, and hyponatraemia.

The Department of Otorhinolaryngology was consulted for the oral crusting lesion (Figure 2). Scraping of oral crust followed by the application of Triamcinolone gel mixed with Miconazole gel twice daily was advised due to suspicion of fungal infection because of the immunocompromised state secondary to typhoid. Given the resource-poor setup, cytology and staining were not sent, and the patient was treated for presumptive fungal infection in the setting of an acquired immunocompromised state caused by typhoid infection. The oral lesions showed dramatic improvement with subsequent treatment, as shown in in Figure 2. The patient was eventually discharged, vitally stable and healthy, after an eight day-course of Azithromycin and a 10-day course of Meropenem. Treatment of the oral lesion was continued for 12 days till complete resolution. 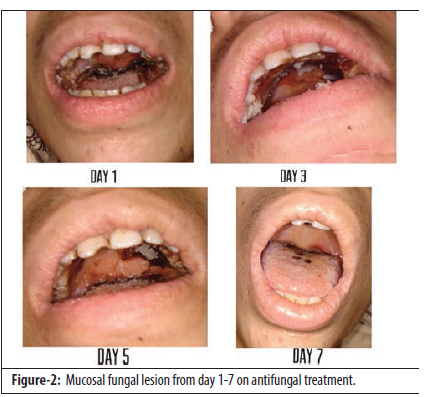 Salmonella typhi causes infection by the invasion of the gut epithelium. After the invasion, it multiplies within the lymphoid tissue of the gut and thereafter disseminates into the bloodstream, causing complications of the infection.2 This case represents yet another complicated presentation of typhoid fever. Typhoid encephalopathy is a relatively frequent complication of enteric fever (seen in about 17 percent cases) and that also with high mortality (around 55 percent according to a study).6 It can present with an extensive range of pathological states, including acute psychosis, acute confusional state, parkinsonism, rigidity, acute schizophrenia, and even bizarre neurological syndromes.7 Although the precise mechanism underlying typhoid encephalopathy remains uncertain, a diverse set of pathological lesions involving the central nervous system have been observed, including purulent exudates in brain parenchyma meninges, vascular thrombosis, intra-parenchymal haemorrhages, disseminated granulomas, and even intra-cerebral abscesses.7 While typhoid encephalopathy remains a commonly reported complication of enteric fever, typhoid encephalitis per se is a rare phenomenon.8,9 Mellon G et al, in their case report, identified typhoid encephalitis with neuropsychiatric manifestations of language dysfunction, agitation, confusion, and signs of pyramidal irritation (spasticity and hyperreflexia).10 They found antibiotic therapy to be a trigger for encephalitis due to possible endotoxaemia from bactericidal activity.10 The patient was treated successfully with a four- to five-day course of IV prednisone in addition to the ongoing antibiotic therapy.10 Another case report by Lal V. et al identified Amoxicillin therapy against enteric fever as a trigger for the development of post-infectious/parainfectious demyelinating encephalitis with diffuse cerebral oedema and white matter hypodensity on CT scan. Our patient, too, responded well to IV corticosteroid therapy.8 J van de Wetering et al, in their case report, presented a patient with severe complicated typhoid fever who developed diffuse life-threatening cerebral oedema with an unremarkable CSF examination a month into the disease. He was then treated successfully with Mannitol and Dexamethasone.9 A case report also observed an association of typhoid fever with anti-NMDA receptor encephalitis in a young child inflicting typhoid fever as a possible trigger for this disorder.9

Considering all these studies, the present case report shows a unique presentation of typhoid fever in several ways. Most case reports presented above have reported the development of encephalitis and cerebral oedema after initiation of antibiotic therapy, inflicting bactericidal endotoxaemia as the possible trigger for the development of encephalitis and cerebral oedema. One of these has stated post-infectious/parainfectious demyelination as the pathological process underlying the development of encephalitis and diffuse cerebral oedema. In contrast, the present case perhaps typhoid fever was itself the reason for the development of diffuse cerebral oedema and encephalitis since the neurological symptoms improved dramatically within a day or two after initiation of the appropriate culture sensitivity-based antibiotic therapy without the use of corticosteroids. Another unique aspect that distinguishes this case from other previously reported case reports was the inability to obtain a CSF sample for examination because of the concurrent severe thrombocytopenia (platelet count less than 40,000/µL), which served as a contraindication for lumbar puncture.11 Moreover, almost all cases discussed above were already severe cases of typhoid fever with multi-organ involvement that became even more complicated with CNS involvement, however, in contrast, this patient developed cerebral oedema and encephalitis with relatively unremarkable liver function and kidney function markers. Adding to the list, this case report also recorded fungal infection as a possible complication of typhoid that can sometimes confuse diagnoses, such as in our case, with concurrent oral lesion and encephalitis. The limitations of our study, which stemmed from a resource-poor setup were the inability to repeat costly investigations such as EEG and CT scan during and after the illness of the patient as well as the failure to obtain brain MRI scan and detailed report with cytology of the contents collected from the oral lesion (to be able to identify the specific fungal pathogen). Due to similar reasons, we could also not attach EEG patterns with the case report (and hence are limited to only report the findings). It is crucial to learn that typhoid fever constitutes a highly complicated and rapidly mortal infectious disease that can present with diverse symptoms.

Typhoid fever is one of the most highly prevalent infectious diseases in Pakistan. It remains a major cause of morbidity and mortality due to atypical presentations and frequent development of complications. Typhoid encephalopathy is a relatively common feature of enteric fever seen in up to 17% of patients; however, encephalitis per se with diffuse cerebral oedema on CT scan and typhoid associated fungal infections are rarely witnessed phenomena. These associated conditions, if present, may produce diagnostic uncertainties and therapeutic difficulties. This report represents a complicated case of typhoid that will help physicians consider a broader spectrum of typhoid symptoms that a patient may present with.

Consent: Informed consent was obtained from the parents of the patient for publication of this case report.

Malignant peripheral nerve sheath tumours in a patient with Neurofibromatosis-1

Community-acquired meningoencephalitis due to concomitant infection caused by Naegleria fowleri and Streptococcus pneumoniae from Karachi, Pakistan: A Case Report

The gastrointestinal basidiobolomycosis, a rare entity: Case report and review of literature