The objective of the endeavour was to study the clinical presentation, diagnosis, and management of paediatric patients suffering from congenital adrenal hyperplasia and understand the issue in the light of available published data on the disease in Pakistan through a systematic analysis of researches.

From an analysis of five-year retrospective data on congenital adrenal hyperplasia in patients of paediatric age group from a tertiary care centre in the capital of Pakistan and the available published Pakistani literature on CAH, it was concluded that the resultant deficiency of cortisol, aldosterone, and a rise in adrenal androgens is responsible for the symptomatology observed in the disease. Particularly, the presence of ambiguous genitalia makes the disease a difficult problem to tackle, especially in complex social conditions such as in Pakistan. The country not only lacks statistical data on the disease but also the diagnostic machinery making the problem two fold. It is only through maintaining an efficient disease registry and the introduction of neonatal screening programme that we might start grappling the crux of the issue.

Congenital adrenal hyperplasia is an autosomal recessive disease of cortisol biosynthetic pathway. There is a dearth of data on the epidemiology of CAH in South Asia including Pakistan1 and so are the research efforts done in this field. In Pakistan, just like its neighbours,2 the incidence of CAH is likely to be high owing to the cultural practice of consanguineous marriages. And then, there is the evil of lack of education, awareness, and relative poverty. Furthermore, Pakistan has not established an effective screening programme. This has made the illness a unique challenge for the country.

The present state of affairs has sparked our interest in CAH. We intend to provide a basic information structure on the topic which might serve as a foundation for further research in the country.

The data from Shifa International Hospital and Shifa Falahee Foundation Medical Records, Islamabad was retrospectively checked from October 15, 2019, to January 15, 2020, for patients who were either diagnosed at the hospital or those who were diagnosed cases and came to the hospital seeking inpatient care, during the span of five years—January 2, 2014 and  September 20, 2019. To search for these cases, terms such as congenital adrenal hyperplasia, adrenal abnormalities, and insufficiency were used. Adrenal insufficiency with problems other than CAH was excluded. The data was subjected to analysis of signs of CAH, biochemical results, imaging, and management. To have a broader territorial insight, a systematic search of published articles on CAH among Pakistani population was done. The unpublished data and ongoing research was not included. The data was thoroughly discerned and summarised to gain an understanding of the current disease burden, diagnostic modalities, and issues at hand.

Detailed clinical and biochemical analysis of 10 (44%) male and 13 (56%) female patients with CAH was done. Ambiguous genitalia were mentioned as the chief complaint in 12 patients who underwent genital reconstruction surgeries out of which 8 were females and 2 were males (Table 1). Two patients had adrenal crisis. Failure to thrive was observed in one patient. Family history of deaths of male members at an early age, i.e. around 3 months, was noted in three families. Out of 11 remaining cases, 6 patients who presented with complaints of vomiting, diarrhoea and dehydration recovered quickly with symptomatic treatment and intravenous steroids. Ten patients had been referred for genital reconstruction from different hospitals of Pakistan. The biochemical data available in medical records of these patients is shown in table 1. Quite interestingly, two cases demonstrated high levels of aldosterone which could be due to cross reactivity with adrenal steroid precursors. 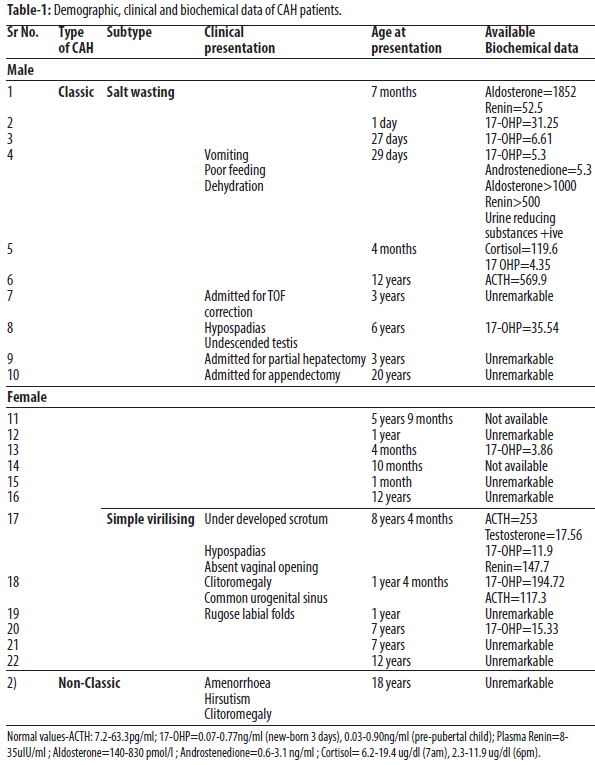 The available data of Pakistan on the subject was critically evaluated from a total of seven CAH studies (Table 2). Their main focus was clinical presentation, diagnosis, lab findings, management, and mainly the challenges encountered in these areas. Almost all of these cited significant diagnostic delay which was attributed to wrong gender assignment at birth, lack of awareness, poverty, ill formed social beliefs, religious dogmas, non-availability of new-born screening facilities and failure of recognition of CAH by the primary healthcare physician. One case series reported a case with presentation as late as 47 years of age. Furthermore, consanguinity, as a causal factor, was reported by more than half of these studies. Those who performed mutational analysis, reported I2 splice to be the most frequent mutation (27%) followed by Ile173Asn (26%). Once diagnosed, all of the patients benefited from hormone replacement therapy. A case series also mentioned improvement in fertility of female patients suffering from CAH. These studies strongly advocate effective preventive strategy in the form of new-born screening programmes to tackle the disease burden. 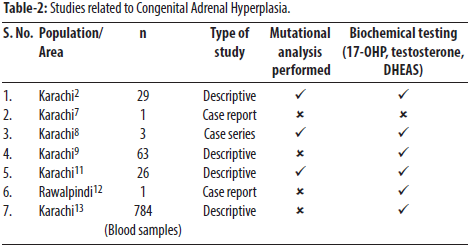 Congenital adrenal hyperplasia can affect girls and boys equally. CAH phenotypes usually vary with enzyme deficiency. In 21 hydroxylase deficiency, which is the most severe form, infants have poor feeding, weight loss, failure to thrive, vomiting, dehydration, hypotension, hyponatraemia, hyperkalaemia, and metabolic acidosis. Females with classical 21-OH hydroxylase and 11 beta hydroxylase deficiency usually have virilisation of genitalia, which includes clitoromegaly, fusion of labial folds, large phallus, and single perianal urogenital orifice. In our study, nine female patients had ambiguous genitalia. In milder forms, excessive exposure to androgens leads to early signs of puberty, premature pubic and axillary hair, rapid growth in childhood but having a short stature as an adult.3 While males have alopecia, females develop hirsutism and menstrual irregularities or polycystic ovarian syndrome.4 In our hospital, 17-hydroxyprogesterone was employed for establishing diagnosis, while aldosterone and renin was used for patients who had hypertension. All patients were given hydrocortisone and fludrocortisone, making glucocorticoids the main stay of the treatment.

Many case reports have been published on congenital adrenal hyperplasia with interesting clinical findings.5,6 One of our patients, had tetralogy of Fallot with CAH since birth. No such report has been previously mentioned in literature; however, there are studies in which CAH has been mentioned with cardiac symptoms such as arrhythmias resulting from electrolyte imbalance.5 Another intriguing finding was elevated aldosterone levels in two cases possibly due to cross-reactivity of adrenal androgens with aldosterone, making it difficult to distinguish it from Pseudohypoaldosteronism Type 1.6

The findings of the current study also commensurate with the existing Pakistani research literature (Table 2). According to these studies, there is a significant delay in the diagnosis of CAH in our population.1,7-9 One of the main impediments is the ignorance and irrational social approach to the problem. Having such a child is considered a stigma. In the collectivist culture of Pakistan, most of the matters concerning an individual’s personal life are decided collectively by the family.1 If the person in question is a female, even the distant members of the family consider themselves to be the stakeholders. Gender reconstruction surgery is seen as a taboo. Even if the surgical procedure is agreed upon, there always remains the problem of loss to follow-up and poor compliance.8 Secondly, failure of primary healthcare doctors and nurses to recognise highly masculinised external female genitalia is another issue9 which also leads to late diagnosis. In the background of an already existing societal bias, lack of new-born screening facilities proves to be the last nail in the coffin.7,8 Screening is only available mostly with private laboratories in Pakistan and abroad10 and that too at an exorbitantly high costs.

Efforts for genetic analysis of CAH were demonstrated by only three local studies.1,8,11 In a versatile ethnic landscape with staunch cultural practice of consanguineous marriages, the probability of high prevalence of CAH with novel mutations of CYP21 gene is expected to be high.9 Notwithstanding this fact, there are no genetic counselling facilities available in our country.

Taking into account the life-threatening complications of CAH and the long-term detrimental effects, it is imperative for health authorities of Pakistan to establish an expanded new-born screening programme with convenient access to biochemical and genetic testing. Healthcare system should also focus on training genetic counsellors to help consanguineous couples make wise decisions. This way, we might be able to ameliorate the plight of our CAH patients.

Considering the limited number of patients studied during a small time span, this account of CAH cannot elucidate the epidemiology of the disease in question. Furthermore, the clinical notes in medical record files were not comprehensive enough with regards to questions of consanguinity, family history, and biochemical work up done prior to visiting our hospital.

The deficiency of cortisol, aldosterone and a rise in adrenal androgens leads to the characteristic symptomatology observed in the disease. Particularly, the sign of ambiguous genitalia makes the disease a mix of medical and social conundrum hence making it difficult to tackle. Lack of awareness, poverty, ill formed social beliefs, religious dogmas, non-availability of Newborn screening facilities and failure of recognition of CAH by primary health care physician lead to diagnostic delay in our country.

Investing in mental health during the first 1,000 days of life: Now and future

A derivation of factors influencing homeopaths to promote quackery in Sindh