Blood to the arm is mainly supplied by the brachial artery, which arises at the termination point of the axillary artery at the level of inferior margin of the teres major muscle. The artery ends by dividing into two terminal branches: radial and ulnar. The bifurcation normally takes place at the cubital fossa or around a finger’s width below elbow at the level of the neck of the radius bone. For the current narrative review, literature published from 2016 to 2022 was searched on PubMed, Google and Google Scholar databases. Across the globe, variation in terminal branching pattern of the brachial artery was observed. In most cadavers, higher termination was observed in the right upper limb. The variability can have adverse effects on the diagnostic, therapeutic and interventional procedures. As such, awareness of the varying anatomical location of the branches is essential for medical practitioners to avoid procedural errors and misdiagnosis.

Blood to the arm is mainly supplied by the brachial artery,1 which arises at the termination point of the axillary artery at the level of inferior margin of teres major muscle. The brachial artery arises from the third segment of the axillary artery.2 The artery terminates by dividing into two terminal branches: radial and ulnar arteries. The bifurcation normally takes place at the cubital fossa or around a finger’s width below the elbow at the level of the neck of the radius bone.2,3 Brachial artery is in close relation to the median nerve, which, being initially on its lateral side and later crossing it, finally sets it on its medial side.4 The brachial artery gives off two terminal branches: medial and lateral. The medial branch crosses over the lateral branch and forms the radial artery, while the lateral branch goes on the medial side to become the ulnar artery.3

It is quite common to counter vascular abnormalities in the upper limb.5 Tsoucalas et al. documented that prevalence of vascular abnormalities in brachial artery was 20%.6 Auwal et al. highlighted the high termination and bifurcation of brachial artery as a common vascular abnormality in many regions of the world.2 A recent study in Nepal highlighted various patterns of brachial artery branching. In 5.17% limbs, the terminal branches were at a higher level than normal, 1.72% in the mid-third area of the arm, and 3.45% had in lower one-third region, while in 5.17% area of the arm, the branches were located at a lower position than normal in the region of the shaft of radius.1 Lalit et al, mentioned variability in 5.35% of the limbs in the form of superficial brachial artery, while in 1.78% of the studied limbs, the brachial artery showed trifurcation into radial, ulnar and common interosseous arteries.7 Literature pertaining to brachial vasculature has mentioned the variability to be 13.33% for the termination of brachial artery at tuberosity of radius and 3.33% for the artery having three terminal branches instead of two.8 A study showed that 7.14% of limbs had unilateral accessory brachial artery (four on the left side and one on the right side) and 4.29% had bilateral accessory brachial artery.9

Kirkov et al. stressed the importance of knowing the anatomical details and the associated variability in terms of brachial artery termination as the vessel is important for procedures ranging from as simple as blood pressure measurement to techniques like flap surgeries and compartment syndrome interventions.10 Since there are associations that exist between the developmental process of vessels with clinico-anatomical features of the brachial artery, one has to be careful before proceeding to any of the medical interventions involving the brachial artery.11

The variations related to the vessels could be due to the complex embryological developmental process. The brachial artery’s origin is linked to the axis artery.12 The superficial brachial artery is a vital foetal vessel on which morphogenesis of the upper limb vessels is dependent.6 During the embryological development, the 7th intersegmental artery gives origin to axis artery. Axial artery and brachial artery arise from the proximal region of the axis artery, while the distal part gives origin to the anterior interosseous artery and deep palmar arch. Radial artery in the initial phases branches out proximally than the ulnar artery and later establishes its connection with the brachial artery at the level of ulnar artery, and the proximal portion later disappears. In case of high bifurcation, the brachial artery is shorter than normal.13 Rohilla et al. documented that embryological errors in the developmental process brings variation in the course of vessels.14 Sieger et al. documented the role of angioblasts and haemodynamic factors playing an essential role in the variability of the arteries’ pattern.15 Research on embryogenesis explained that bilateral bifurcation of brachial artery could be due to the abnormal path, persistence or obliteration of the primitive vessels.16

Keeping in view the significance of anatomical knowledge, the current narrative review was planned to determine the anatomical variation in terms of branching pattern of the brachial artery.

For the narrative review, search was conducted on PubMed, Google and Google Scholar databases for studies related to anatomical variability in the terminal branching pattern of brachial artery. The studies included were those published from 2016 to 2022 in the English language and which had detailed methodology and results. Key words used for the search were ‘anatomical’, ‘variable’, ‘terminal’, ‘branching’, ‘pattern’, and ‘brachial artery’. Research published in any language other than English was excluded. Also, studies with missing or ambiguous methodology and results were excluded .

Diagnostic procedures: The discovery of variability of arteries and their organisation in the body has always been an area of interest for the anatomists.17 The importance of brachial artery must be known as one should know that while taking blood pressure a varied site of the artery could be a possibility.18-20 The vascular variations of the arm must be understood as the areas are routinely involved in several medical, radiological and surgical procedures.21-24 Brachial artery is a vital structure in various procedures, like interpretation of angiograms, arteriography, pulse doppler sonography, etc.18 Similarly, it is a vessel of choice for cardiac ventriculography when femoral artery is inaccessible.25 Inaccurate understanding due to lack of knowledge regarding brachial artery variability can lead to inaccurate reading of angiograms.16

Therapeutic procedures: Altered anatomical variation pertaining to the division of brachial artery and its termination has high clinical significance.26 Radiologists and the surgeons must keep in mind the possibility of anatomical variation while doing procedures and interpretation of angiograms.27,28 It is also a vessel that can be injured when fistula formation in chronic renal failure patients are planned between cephalic vein and radial artery.25 The variation in terms of bifurcation of brachial artery can create hurdles in procedures like percutaneous brachial catheterisation, repair operations of the brachial region and operations involving arm fractures. The course of the three important nerves -- median, ulnar and radial – can be severely affected. The hazard of haematoma formation is also one of the clinical considerations.16,29 Additionally, the knowledge can prevent any unforeseeable risk like vascular bleeding during the procedures.5 The knowledge is also vital for the surgeons who create arterio-venous (AV) fistulas for dialysis patients and to avoid being mistaken for a vein during venipuncture procedure and when drugs are given by intravenous (IV) routes.19,30,31 Injection of IV drugs into the ulnar artery in place of vein because of high termination of brachial artery is a hazard and can result into gangrene.23,32 Additionally, if such variations are not known, difficulties are faced by the surgeons doing procedures like vascular and flap surgeries.8 High bifurcation presents with great issues in interventional radiology.6 Also, in the accidental crush injuries involving the elbow joint, brachial artery is a vessel of concern for the orthopaedics.22 Physicians and surgeons planning flap harvesting, arteriography and reconstructive surgeries need to know the variability pattern of brachial artery.33 There is a dire need for the surgeons and physicians planning for interventions to go for magnetic resonance angiography (MRA) or non-invasive colour doppler scan to rule out any variation of anatomical pattern of brachial artery to avoid any mishap.25 Since there is variability associated with the anatomy of brachial artery, plastic surgeons, physicians and vascular surgeons must be careful to look for variability before they start any procedure.30,34 Additionally, in order to prevent iatrogenic injuries in the patients, it is advisable to go for preoperative vessel mapping.16,35

Arm: Different regions of the arm, like proximal, middle, upper half, hacve been documented to be the sites of termination of the brachial artery.8,14,18,21-24

Teres major: Some studies have mentioned teres major as a reference point.28 The distances ranging from 2.26cm to 7.5cm below the insertion of teres major have been mentioned to locate the end point of the brachial artery and the start of its division.2,12,26

Coracobrachialis: Some studies have documented Coracobrachialis for referencing. Variable sites ranging from above the muscle, at the level of insertion and also distal to its attachment, have been mentioned as reference points for the termination of the brachial artery.10,19,25,31,32

Humerus: Humerus shaft, intercondylar line and epicondylar region have also been used as points to show the termination of the brachial artery.17,20,29,31,32

Region proximal to elbow joint: Region from the brachial artery ending point to the elbow joint has been mentioned ranging from 7cm to 20cm.34,35

Trifurcation of brachial artery: The brachial artery in majority of the cadaveric limbs has been observed to have bifurcation at the level of its termination. A few of the limbs have demonstrated the presence of three vessels at the point where the vessel terminates.8,32

Gender and the side of the limb as determinant factors: In most studies, male cadavers were observed to have variability, while some of the studies showed anatomical variance in female cadavers. Likewise, preponderance of right-sided terminal branching pattern of the brachial artery was noticed, while some studies documented left-sided changes in the pattern, and only 2(7.4%) studies showed anatomical changes bilaterally (Table). 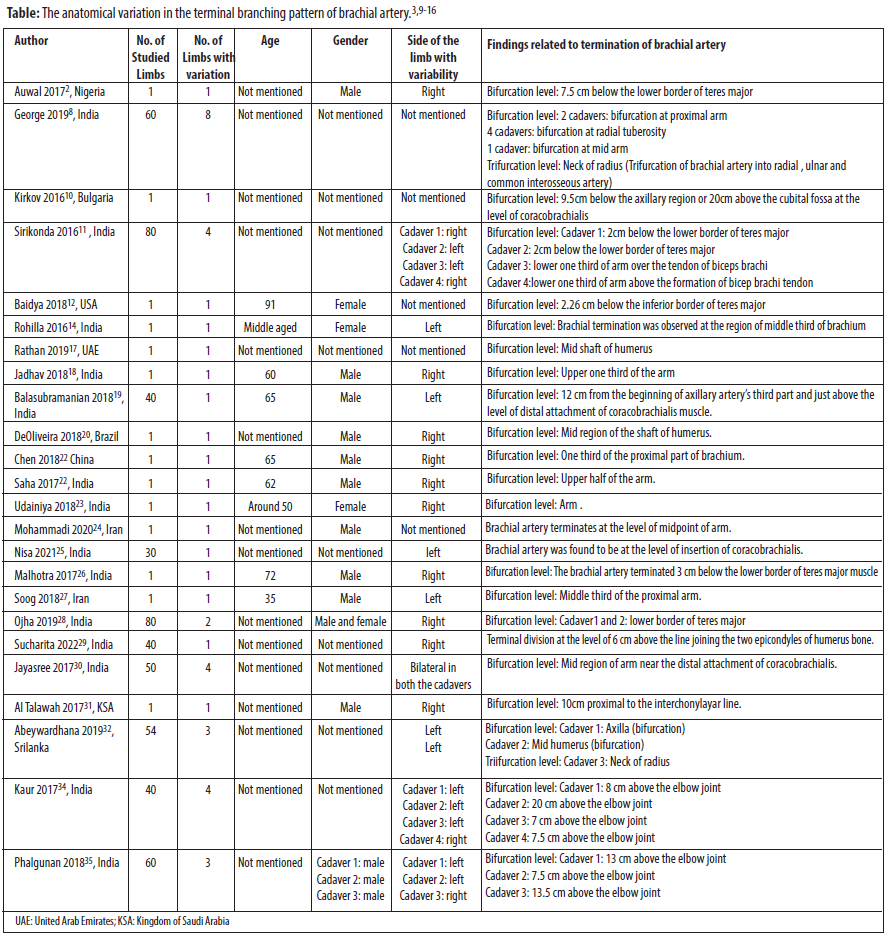 Radiologists, vascular surgeons, orthopaedics and cardiologists should be updated about the possible variances as it can affect diagnostics and therapeutic procedures. Additionally, the medical curriculum should focus on the addition of the topic of variance in anatomy, medicine, surgery and radiology books so that the newcomers should recognise the existence of variable arterial pattern pertaining to the brachial artery. Keeping in mind the clinical significance of the anatomical position of the brachial artery and its possible variations, the knowledge should be taught to the students of anatomy and medicine.

Variations in the terminal branching pattern of the brachial artery have been reported from across the globe. In most cadavers, higher termination was observed in the right upper limb. The variability can have adverse effects on the diagnostic, therapeutic and interventional procedures. As such, awareness of the varying anatomical location of the branches should be ensured among medical practitioners to avoid procedural errors and misdiagnosis.