Objective: To evaluate the impact of hepcidin and ferritin in pathogenesis and prognosis of type 2 diabetes mellitus subjects taking only metformin or combined anti-glycaemic agents.

Results: Of the 300 subjects, there were 50(16.66%) in each of the 6 groups. Overall, there were 144(48%) males and 155(51.66%) females. The mean age was significantly lower in the control group 34.72±7.87 compared to all the diabetic groups (p<0.05), and the same was the case with respect to all the parameters (p<0.05) except high-density lipoprotein (p>0.05). Besides, hepcidin level was significantly higher in the control group (p<0.05). Ferritin levels were significantly increased in newly-diagnosed T2DM subjects compared to the controls (p<0.05) while all other groups showed decreased ferritin levels (p<0.05). Hepcidin gave inverse correlation with glycated haemoglobin only in diabetics taking only metformin (r = -0.27, p=0.05).

Conclusion: Anti-diabetes drugs not only addressed type 2 diabetes mellitus, but also reduced levels of ferritin and hepcidin that are found to play a role in diabetes development

Type 2 diabetes mellitus (T2DM) is a metabolic disorder reaching epidemic proportion globally. As per the International Diabetes Federation (IDF) in 2019, there were 463 million diagnosed cases of diabetes worldwide, which was predicted to increase up to 578 million in 2030 and 700 million in 2045.1 In Pakistan, the prevalence of T2DM was estimated as 26.3 % by the second National Diabetes Survey of Pakistan (2016-17).2

Hepcidin hormone works for iron reabsorption across epithelial membrane of the gastrointestinal tract (GIT) and it also recycles the metal element in red blood cells (RBCs), placenta and macrophages.3 Hepcidin plays its role by binding with ferroportin (FPN) receptor, which is the only transporter of iron in the body, and then causes the internalisation, inactivation and degradation of the exporter.4 Hepcidin levels are declined when body needs more iron in circulation because diminished concentration of hepcidin results in the release of stored iron, and enhances iron absorption through gastric epithelium.5

Elevated concentration of hepcidin are found in some T2DM subjects that play important role in inflammation, overweight, obesity and chronic kidney impairment.6 However, low levels of hepcidin in T2DM is not yet fully understood, even though it might play a key role in insulin resistance (IR).7 It was documented that insulin may affect hepcidin synthesis directly by increasing expression of signal transducers and activators of transcription 3 (STAT3) protein and deoxyribonucleic acid (DNA) binding activity in hepatocytes which explains deficient  hepcidin concentration in T2DM.8 Inappropriate levels of hepcidin accompanied with IR might lead to T2DM because of greater degradation of beta cells of pancreas due to iron overload.9

Metformin is a synthetic oral anti-diabetic drug clinically used as a first line treatment for diabetes across all age groups.10,11 The association of metformin with hepcidin is still unclear as one study mentioned highly increased hepcidin levels with greater use of metformin,11 while another study observed decreased hepcidin concentration with the intervention of metformin for lesser duration.7 Though metformin is demonstrated to suppress the hepcidin production via the inhibition of STAT3 protein through adenosine monophosphate (AMP)-activated protein kinase (AMPK).12

To the best of our knowledge, no study in Pakistani population has explored the combined role of ferritin and hepcidin concentrations in T2DM with metformin and oral hypoglycaemic agents (OHAs). The current study was planned to fill the gap by analysing the effect of ferritin and hepcidin levels in T2DM subjects with exposure to metformin only, and/or in combination with other anti-glycaemic therapies in newly diagnosed and known diagnosed T2DM subjects.

The observational case-control study was conducted at the Department of Physiology, Baqai Medical University (BMU), Karachi, from August 2019 to October 2020. After approval from the institutional ethics review committee, the sample size was calculated using OpenEpi calculator13 with 80% power of test, 5% two-sided level of significance, and ratio of sample size 1. Mean hepcidin values for control and T2DM subjects were taken from an earlier study.9 The sample was raised using consecutive sampling technique from the BMU’s Baqai Institute of Diabetology and Endocrinology.

Correlation analysis of clinical parameters across all the 6 groups was tabulated (Table 2). 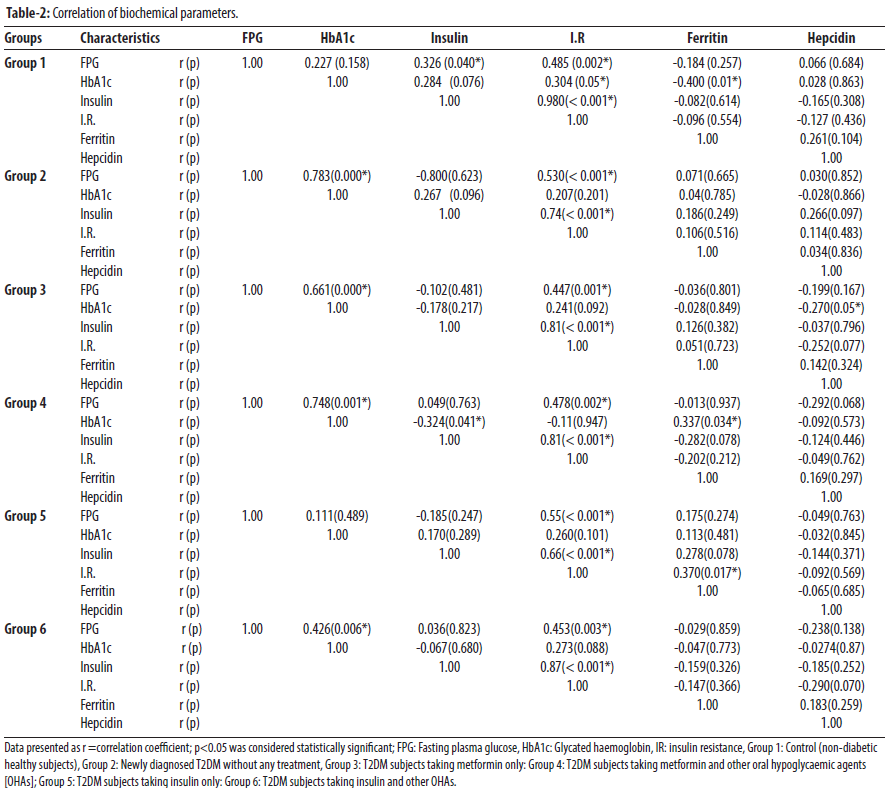 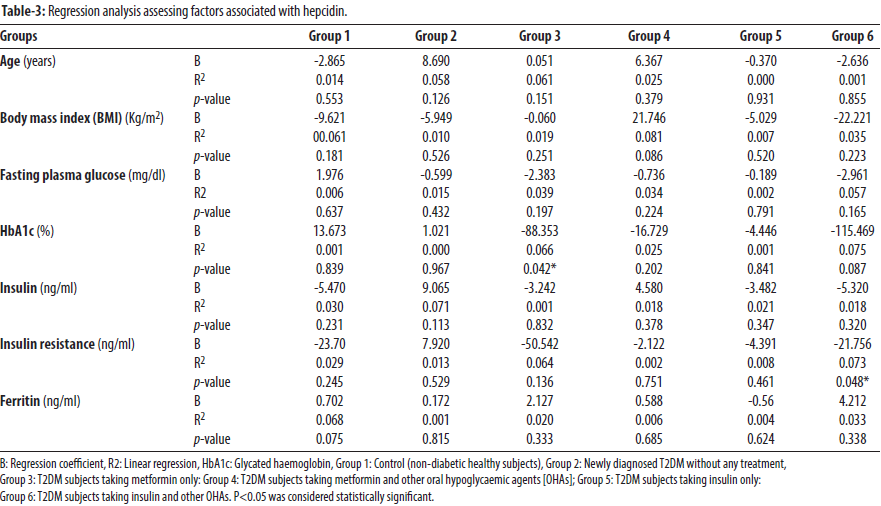 Effects of altered hepcidin (Table 4) and ferritin (Table 5) concentrations on HbA1c levels in all the groups were also studied. 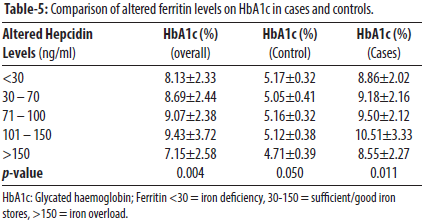 Unlike hepcidin, increased HbA1c was found with higher serum ferritin concentration, but beyond 150ng/ml of ferritin, HbA1c began to drop again.

Overall, the current study found low levels of hepcidin in all T2DM groups. In newly-diagnosed T2DM subjects without any anti-diabetes treatment relatively higher hepcidin levels were found, but the level decreased in groups taking metformin alone and combined therapy of metformin with OHAs. Again, hepcidin level increased in DM groups taking insulin alone and combined insulin with OHAs, indicating some contribution of hepcidin to T2DM pathogenesis or prognosis.11 This reflects the effects of hypoglycaemic drugs on hepcidin levels. It is observed that insulin administration potentiates the secretion of hepcidin via STAT3 protein which is a crucial modulator for hepcidin transcription.18,19 Another mechanism that links hepcidin secretion with insulin is the glucose stimulation. Hepcidin can also be produced extra-hepatically from beta cells of pancreas, therefore when glucose stimulates insulin secretion, it simultaneously secretes hepcidin from same granules that may act as paracrine fashion.20,21 Thus, the oral anti-diabetic agents that decrease the glucose levels in plasma might be responsible for concomitant decrease in hepcidin concentrations. Some studies explored the relationship between hepcidin levels and T2DM, but the findings are inconsistent and vague as no exact association was found.22 The current results are consistent with a study reporting significantly lower levels of hepcidin in T2DM subjects compared to the healthy control.7 Whereas in newly diagnosed diabetes subjects, no exogenous insulin and/or OHAs are liable for decreased hepcidin concentration instead the increased ferritin/iron levels are thought to be the reason behind T2DM development.

Ferritin is the complex protein that plays a role in the storage of excess iron in non-toxic and soluble form. Increased amount of ferritin in cells may lead to IR and, ultimately, destruction of beta cells. Hyperinsulinaemia prior to development of full-blown DM may be attributed to higher levels of ferritin.23 The current study observed similar findings in Group-2 in line with an earlier study.24 In other T2DM groups, a decline in ferritin concentration was witnessed with significant decrease in groups 5 and 6. The findings are consistent with literature.25 The exact molecular mechanism for this difference is not known yet.

Higher ferritin levels are observed in uncontrolled DM subjects despite the use of anti-diabetes agents when compared with controlled DM and healthy subjects.26 A recent study on rodent model observed that iron chelator desferroxamine (DFO) not only decreases iron levels but also improves insulin levels and sensitivity, increased expression of glucose transporter 1 (GLUT1) and GLUT4 in adipose tissues.27

When different groups of diabetes were compared, it was found that Group-3 had lesser mean values of HbA1c compared to other diabetes groups, which is consistent with an earlier study.29

It is worth noting that Group-3 in the current study had lowest IR among all the diabetes groups. Lin et al. reported decreased IR in DM patients receiving insulin alone and combined OHA-plus-insulin in two different groups when compared to newly diagnosed diabetes subjects, which is in contrast to the current findings.30

Cholesterol and LDL levels were found to be the lowest in Group-6 compared to control and other diabetes groups. This is consistent with a previous study.31

The present study did not find association between ferritin and hepcidin in any group on drug basis, nor altered hepcidin reflect any impact on the control of DM. It was observed that by increasing the ferritin levels, HbA1c also raised significantly, but no significant difference on glycated Hb was seen with different hepcidin values. This reflects the fact that though levels are found decreased in T2DM participants, hepcidin is not the culprit behind the change in glycated Hb values in DM subjects in present study. Significant inverse association of ferritin with hepcidin was seen only in iron-deficient group, while iron-sufficient and iron-overload groups showed no association with ferritin. Statistically significant difference for ferritin was seen on HbA1c levels, and weak association of ferritin with HbA1c was observed, suggesting that iron overload could be involve in development of DM, or DM can bidirectionally elevate ferritin levels due to low-grade inflammation associated with it. But these findings need further validation through a larger dataset as in present study, only a small number of diabetic subjects (6%) had iron overload, while 38% and 31.2 % control and diabetic subjects, respectively, were-iron deficient in the current study.

The present study has limitations, too, as the effects of OHAs other than metformin was not assessed individually. Follow-up based prospective cohort studies with larger sample sizes are recommended to validate the findings of the current study. Also, the dose of different anti-glycaemic agents with their effects on these clinical variables should be studied to observe the diabetic prognosis and complications.

Decreased hepcidin levels in all diabetic groups underlined its role in T2DM pathogenesis. Increased ferritin levels in specific groups signify the role of iron in the development of T2DM.

Disclaimer: The text is based on a Ph.D. thesis.

Effects of dietary counselling on lipid profile among liposuction patients