Objective:  To investigate the distribution of helicobacter pylori-related genotypes of oipA, babA2, and babB in patients with gastrointestinal diseases.

Method: The retrospective study was conducted at the Jiamusi College, Heilongjiang University of Traditional Chinese Medicine, Harbin, China, and comprised data from February 2017 to May 2020 of patients of either gender 20-80 years who underwent gastroscopy. An instrument based on polymerase chain reaction was used to amplify oipA, babA2 and babB genes, and their distribution in terms of gender, age and pathological types was analysed.

Helicobacter pylori (Hp) may be colonised on the epithelium of the gastric mucosa (Figure-1), and most patients with Hp infection show no symptoms.1 It has been shown in relevant studies that Hp infection is a vital pathogenic factor for gastrointestinal (GI)diseases, such as chronic superficial gastritis (CSG), chronic atrophic gastritis (CAG), duodenal ulcer (DU), gastric ulcer (GU) and gastric cancer (GC), while host susceptibility, environmental factors and differences in virulence gene expression can affect the clinical outcome after Hp infection.2 Differences in Hp virulence may be determined by Hp virulence gene polymorphism.3 To date, Hp gene polymorphism has been studied mainly on the two genes of cytotoxin-related protein cagA and vacuolar toxin vacA, and Hp is divided into type I strains (cagA-positive and vacA-positive) and type II strains (cagA-negative and vacA-negative).4 However, a few studies have been carried out on the expression of virulence genes, such as oipA, babA2 and babB, in various types of gastrointestinal disorders (GIDs). The current study was planned to investigate the distribution of oipA, babA2 and babB genotypes in various GIDs. 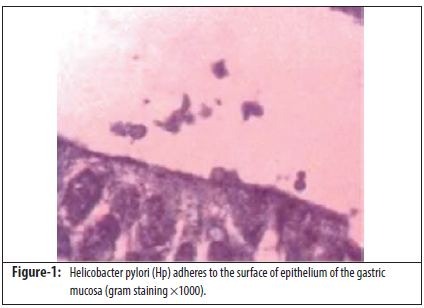 The retrospective study was conducted at the Jiamusi College, Heilongjiang University of Traditional Chinese Medicine, Harbin, China, and comprised data from February 2017 to May 2020 of patients who underwent gastroscopy. Data related to patients of either gender aged 20-80 years who met the diagnostic criteria of various GIDs and the diagnoses were confirmed through gastroscopic biopsy5-7 Patients gave voluntary consent for their data to be used for research purposes provided a study was approved by the institutional ethics review committee, which the current study obtained. Data was excluded for patients with missing information, those who had taken antibiotics, non-steroidal antacids, gastric mucosal protective agents, and anti-inflammatory drugs within 2 weeks prior to specimen collection, patients with immune system diseases, and those with gastroesophageal reflux.

For sample collection, the gastroscope was moved into the patient's digestive tract to search for the location of the lesion. The oesophagus, stomach and duodenum were explored. After finding the suspected lesion, gastric mucosa specimens were taken and stored at -80°C for testing and genotyping.

The preserved Hp strains were resuscitated and the bacteria were scraped after 48h of culture, and then washed with phosphate-buffered saline (PBS) 1-2 times. Hp nucleic acid DNA was extracted with the extraction kit and stored at -80°C for later use.

A PCR instrument was utilised to amplify oipA, babA2, and babB genes, and the primer sequences were noted

(Table-1). PCR was performed in 25µL of the reaction system, containing 1µL of Hp template (50 ng/µL), 2µL each of forward and reverse primers (10µM), 2µL of deoxynucleoside triphosphate [dNTP], 2.5µL of 10×Buffer, 1µL of Thermus aquaticus DNA [TaqDNA], plus double-distilled water [ddH2O] 25µL. Each sample was repeated 3 times. After amplification, agarose gel electrophoresis was performed. A gel imager was used for observation, and ddH2O was used as the negative control.

Data was analysed using SPSS 25. Data was expressed as mean±standard deviation and frequencies and percentages, as appropriate. To compare the differences, t test and chi-square test were used, as appropriate. P<0.05 was taken as statistically significant.

Among the 116 patients, no significant difference was observed related to age or gender among the five disease groups (Table-2). 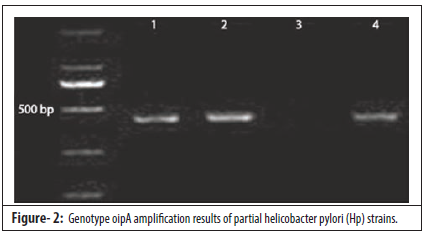 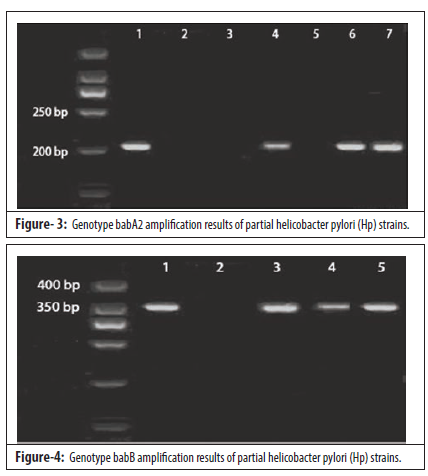 The distribution of oipA, babA2 and babB genotypes was noted in relation to age and gender (Table-3), and with respect to different pathologies (Table-4).

Gastric ailments and chronic infections of the duodenum are common diseases of the digestive tract. Gastric cancer is a common malignant tumour of the digestive tract, and is also among the top three tumours with a low 5-year survival rate.8 The aetiology of gastric cancer has remained unclear to date. However, in recent years, many studies have proposed the development model of “chronic gastritis-atrophic gastritis-intestinal metaplasia-gastric cancer”, and studies have shown that Hp infection affects gastric mucosal inflammation and immunity of patients, which will increase the incidence of gastric cancer.9,10 It is currently believed that the principal pathogenic factors of GIDs caused by Hp are adhesion, flagella, reactive oxygen species (ROS), heat shock protein, urease, cytotoxin, etc., all of which are involved in gastric mucosal damage.11

Epidemiological investigations have revealed that only a small proportion of Hp-infected people will develop GIDs, such as CSG and CAG, which may be mainly caused by differences in Hp strains. On the other hand, differences in Hp strains were in turn associated with virulence gene polymorphism.12 In recent years, babA has likewise gradually become a research hotspot among Hp virulence genes. Gene babA, as one of the outer membrane proteins of Hp, can mediate the adhesion of Hp and has two genotypes, babA1 and babA2. Both are sequentially homologous, but only babA2 is biologically active because it has a 10bp insertion sequence that produces a translation starting point.13 As shown in the current study, among 116 Hp-infected patients with GIDs, the positive rate of babA2 was 41.4%, which was higher than the detection rate of babA2 in an earlier study.14 The positive rate of babA2 gene in Brazil was 44%, which was related to peptic ulcer and gastric cancer.15 The positive rate of babA2 in Japan was 84.9%, but it had nothing to do with the clinical outcome.16

Moreover, in the current study, the infection rate of babA2 genotype was highest in patients aged 41-60 years, and lowest in patients aged 61-80 years; The detection rate of babA2 in patients with GU, DU and GC was higher than that in patients with CAG and CSG, though not statistically significant, which is basically consistent with earlier results,17 suggesting that babA2 genotype may be associated with various GIDs. Genotype oipA is a pro-inflammatory outer membrane protein, which has a close bearing on neutrophil infiltration, clinical symptoms of patients and bacterial colonisation density after Hp infection, contributing to the colonisation of Hp in gastric mucosa.18 A study confirmed that the opiA gene is closely related to inflammation.19 As shown in the current study, the positivity rate of oipA was 44.83%, and Hp in GC patients was dominated by oipA genotype, while patients with DU and GU had a lower infection rate of oipA genotype, which was basically consistent with earlier findings,20 suggesting that oipA infection may cause more severe gastric mucosal damage and is more likely to induce GC compared to babA2 and babB genotypes. Also babB itself acts as a lectin that binds to an unknown receptor on host epithelial cells or modulates the binding of other adhesins.18 As shown in the current study, the positivity rate of babB was 62.07%, which was consistent with earlier reports.21 Furthermore, the infection rate of babB genotype was the highest in patients aged 61-80 years, and the lowest in patients aged 20-40 years. Patients with CSG, DU, CAG, and GU are mainly infected with babB genotype Hp, while patients with GC have a low babB infection rate,21 suggesting that babB genotype may be highly correlated with elderly patients and patients with CSG, DU, CAG and GU, but may have relatively little relationship with GC.

The current study has certain limitations as patients from only one region were enrolled. The mechanism of oipA, babA2 and babB genotypes involved in GC needs to be further studied via cell model experiments or animal model experiments, and other studies need to be combined to further explore the polymorphism and diversity of Hp virulence genes.

Effects of dietary counselling on lipid profile among liposuction patients