Pott's disease may accompany psoas abscesses, but bilateral psoas abscess is rarely encountered. Computerised Tomography (CT) is the gold standard for the diagnosis of psoas abscesses. Treatment of psoas abscess usually involves drainage of abscess and antibiotic therapy. CT and USG-guided catheters are often utilised for abscess drainage. In cases where neurological symptoms are observed, open surgery may be required. Pott's disease accompanied by bilateral psoas abscess was detected in a 21-year-old male patient who was admitted to the clinic with complaints of low back pain and weakness in his left leg at the Selcuk University, Turkey, in 2018. The reason for the development of neurological deficit only on the left side was the compression of the nerve roots by the abscess tissue. The patient underwent debridement and anterior instrumentation with an anterior approach. In the postoperative follow-up it was observed that the patient's complaints were relieved. Pott's disease with bilateral psoas abscesses, in which debridement and instrumentation with an anterior approach is applied, has not been previously reported in the literature, and the current case is a first in this respect.

Psoas abscess is a rare condition in Pott's disease. As regards the site, it is seen in 57% cases on the right side, in 40% cases on the left side, and 3% bilaterally.1 Fever, abdominal pain and weight loss may accompany this condition. In the current case, anterior approach debridement and instrumentation for Pott's disease accompanied by bilateral psoas abscess is described.

A 21-year-old male patient was admitted to our clinic in Selcuk University, Turkey because of low back pain, weakness in his left leg, inguinal pain, scrotal oedema, with the complaints having increased for the last two days. It was disclosed that tuberculosis was considered due to a lesion seen on the X-ray taken six months previously. Treatment for tuberculosis had been administered for three months.

On examination, pain and numbness was spreading from the groin area to the left thigh and ankle. There was hypoaesthesia in the left L4-L5 dermatome, and left knee extension and ankle dorsiflexion strength were decreased as compared to the opposite side, muscle strength was evaluated as 4/5. Laseque test and straight leg lifting test were positive on the left side. On scrotum ultrasonography, a lesion compatible with inflammation could be seen on the left side, described as a hypo-hyperechogenic abscess with a diameter of 4cm. Thorax tomography showed a cavitatory lesion in the lung. Although CT is the gold standard for the diagnosis of psoas abscess, MRI can be used to evaluate the condition of the nerve roots and disc. Lumbar MRI was consistent with L4-L5 spondylodiscitis and psoas abscess. L5 root compression was seen. Psoas abscess was measured as 7cm in diameter on the left and 20cm in caudal length. On the right, the diameter was 5cm and caudal length was 15cm (Figure-1). 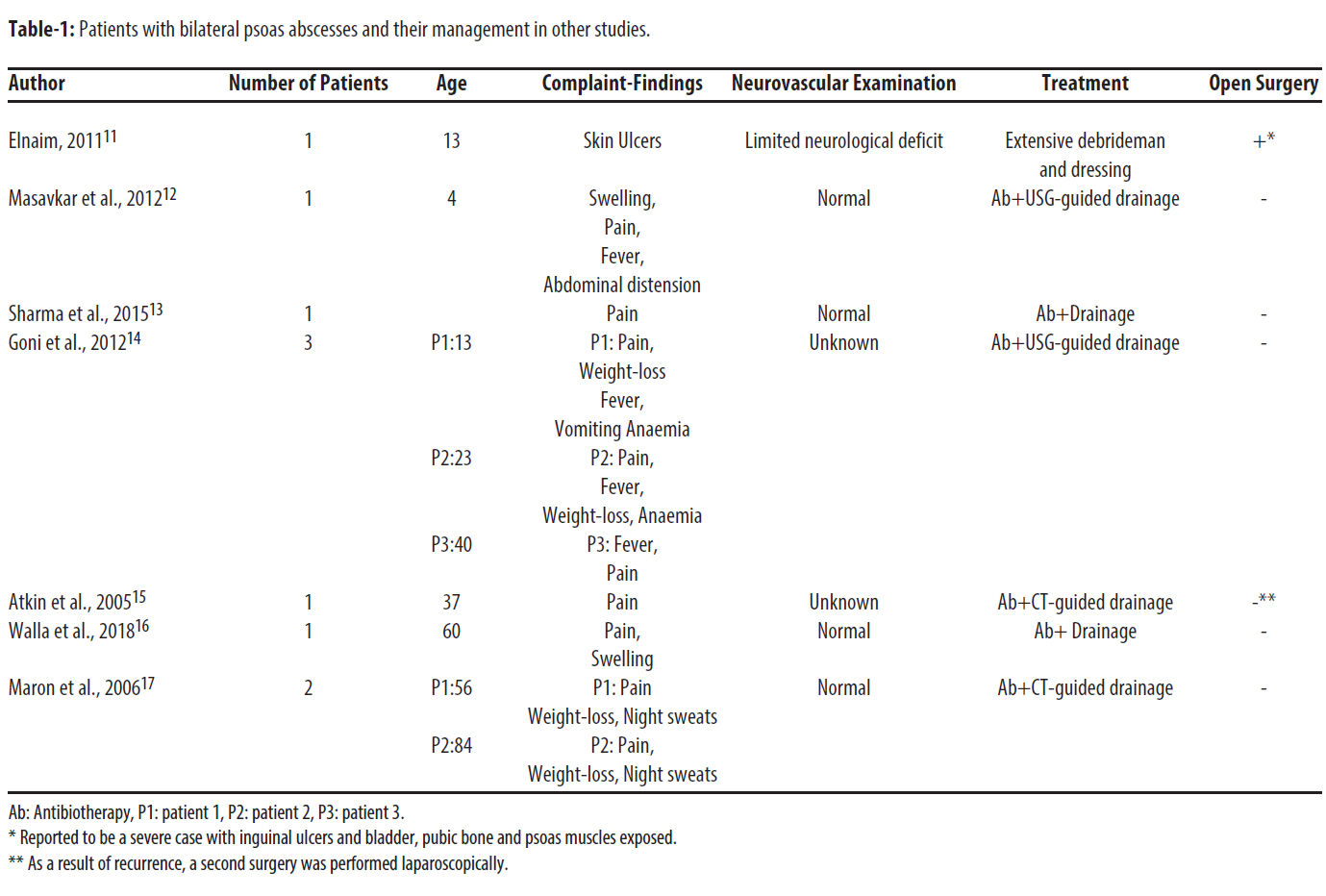 Initially, CT-guided percutaneous drainage, irrigation, and then catheterisation were performed and microbiological samples were collected. Single lumen catheter (12F-14F) was used for drainage and Seldinger technique. After the procedure, 250,000 U of Streptokinase in 100cc saline was administered through the catheter. After 24 hours, less than 50cc drained via the catheter. It was thought to be blocked, progressive neurological deficits were considered and surgery was planned. Anterior decompression and debridement were planned for the operation.

During the operation, the m. psoas was accessed from the retroperitoneal region using the anterior approach in the left lateral decubitus position accompanied by neuromonitoring. The oedematous and enlarged psoas muscle fascia was opened longitudinally, caseous necrosis was removed and necrotic tissues were debrided. The L4-L5 disc and corpus were curetted, the L5 root was decompressed, and pedicle screws were inserted into the L4-L5 anterior corpus. An anterior cage was placed on the L4-L5 disc and then the screws were stabilised with a rod (Figure-2). Intraoperatively, microbiological and pathological samples were taken. No irritation was observed on neuromonitoring. Intraoperative, 500cc bleeding occurred, haemoglobin decreased from 15 g/dl to 12 g/dl, and as a result erythrocyte suspension was not administered. 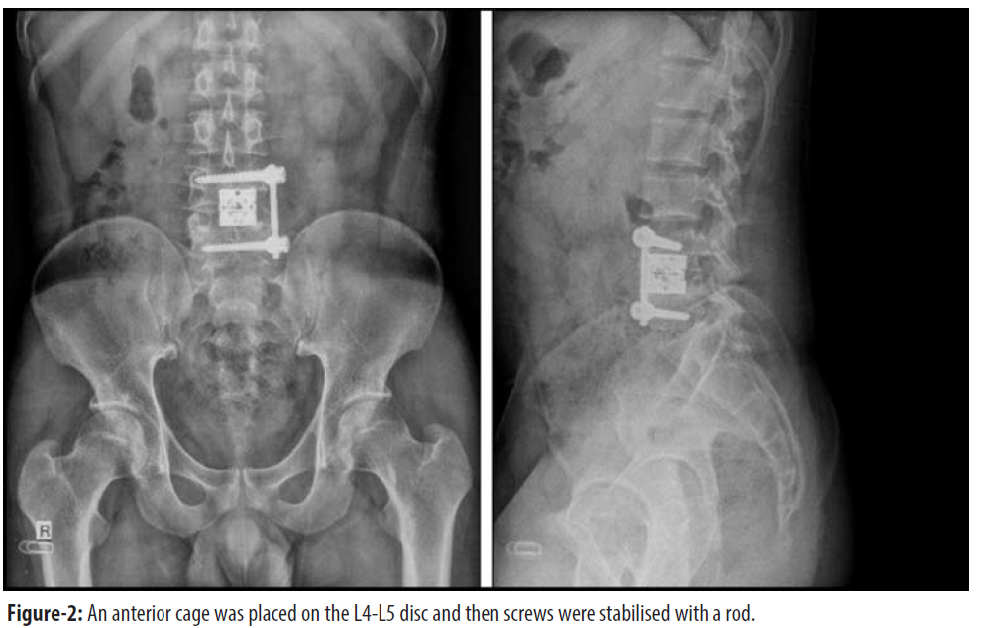 In the postoperative 24th hour, the haemovac drain was removed. Postoperative muscle strength began to improve. In the postoperative 48th hour, the patient was re-operated and right psoas debridement was performed using a mini anterior approach in the right lateral decubitus position. Urological surgeons participated in the operation and performed a left orchiectomy in the supine position at the second surgery. This surgery could have been performed with a direct anterior approach from a single incision. However, since there is a large artery and vein bifurcation in the anterior of the L4-5 disc anteriorly, disc excision and cage placement carry risks, two separate surgeries were performed from two separate incisions.

On postoperative microbiological examinations, gram staining was negative, EZN staining showed bacillus, and TBC-DNA was positive. From micro ELISA tests, galactomannan test was positive and interferon gamma release test was negative. Mycobacterium Tuberculosis Complex was produced in culture. Anti-tuberculosis treatment (INH, Rifampicin, Ethambutol, Pyrazinamide) was administered to the patient who had no antibiotic resistance and the patient was discharged.

In Pott's disease, the infected lesion may expand and penetrate the periosteum after cortical bone destruction. Thus, the infective material infiltrating the psoas muscle causes unilateral or bilateral psoas abscess.2 The rate of paraspinal abscess or psoas abscess accompanying spinal tuberculosis is 75-83%. In patients with psoas abscess, disruption and flexion deformity of the hip, fever, sweating, and weight loss can be seen. CT is the gold standard for diagnosis of psoas abscesses.3

In view of the corpus, the lumbar vertebrae are wider and the facet joints are more vertical, so kyphotic deformity in this region is not expected with spinal tuberculosis.4 Tuberculosis in the thoracic vertebrae is more likely to have neurological deficit and kyphosis than in the lumbar region.2 However, there is no rule that there will be absolutely no neurological deficit during lumbar vertebra involvement. In this region, the nerve roots originate from the vertebral canal and progress over the psoas. Therefore, compression neuropathy may be seen due to psoas abscess associated with enlarging lumbar spine tuberculosis.5 In this case, although the lesion was in the lumbar region, MRI showed that the infective lesion compressed the posterior roots. It is expected that the neurological deficit due to compressive causes in the vertebra will return completely or almost completely after decompression.6

In Pott's disease, good response is obtained after antibiotic therapy. However, surgical treatment should be considered in the presence of pain, deformity and neurological deficits that do not respond to conservative treatment. Surgical debridement should be performed in these patients with or without instrumentation.5,6 All caseous and infected tissues should be removed while preserving the healthy tissues during debridement.2 In Pott's disease accompanied by psoas abscesses, antibiotic therapy alone is insufficient and abscess drainage is required.7 Percutaneous catheter drainage is a commonly used method in these patients and is a less invasive option than open surgery.8 There are also studies emphasising preoperative catheter drainage.7 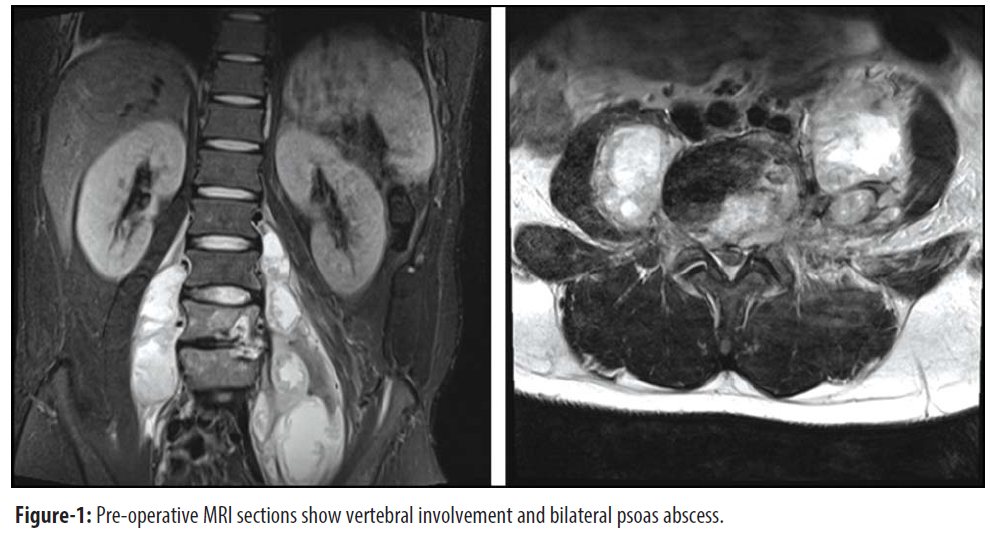 Due to the existence of neurological deficits in the present patient, drainage of psoas abscesses by CT-guided drainage alone was noted to be insufficient.9 The plan was to debride the lesion compressing the vertebra roots from the anterior and insert instrumentation against instability. However, since the psoas abscess was bilateral, the patient had to be positioned separately for each muscle, which would considerably increase the duration of the surgery. Therefore, it was deemed appropriate to drain psoas abscesses with CT-guided catheter9 before debridement of the infected tissue from the vertebral bodies. After the drainage was completed, excision of the lesion causing vertebral neurological defect was planned from the anterior approach. However, the inserted catheter failed and did not provide drainage. As reported in the literature, the percutaneous catheter can sometimes become clogged with calcified and caseous infected material and cannot provide drainage.7 This lead us to plan a two-stage surgery where the abscess would be completely drained from the anterior aspect.

Surgery using the anterior approach provides direct access to the infectious focus of the vertebra. Thus, infective and necrotic tissues can be debrided in a better way and the abscess in the psoas can be easily drained. In favour of this approach, possible deformity or instability of the vertebra can be corrected by instrumentation. In addition, complete drainage of the infectious agent is thought to have an effect on the speed of the clinical recovery of the patient.2 The posterior approach is not sufficient for debridement of the lesions in front of the vertebra. In addition, reconstruction of the anterior spinal column cannot be performed successfully. The anterior approach also has some disadvantages. These include prolonged surgical time, increased blood loss, prolonged hospitalisation, neurovascular complications due to proximity to nerves and vessels, and intestinal complications.10 Spinal instrumentation for vertebral tuberculosis has been frequently discussed in the literature.4 It is stated that it is safe to use implants even if there is an infection. It was reported that there was slow growth of microbial agents and insufficient production of proteins responsible for adhesion to produce biofilm. One of the conditions that should be considered for instrumentation is the status of the posterior column. It is asserted that anterior instrumentation can be inserted if the posterior colon is intact. Anterior instrumentation should not be applied in cases with involvement of the posterior column.

Bilateral psoas abscess is very rare in Pott's disease. The accustomed idea for treatment of these patients is to give antibiotherapy after CT/USG-guided catheter drainage of the abscess. In this case; by bilateral psoas abscess was detected in a 21-year-old male patient who was admitted to the clinic with complaints of low back pain and weakness. For the patient whose antibiotherapy after CT/USG-guided catheter drainage is not sufficient, debridement and anterior instrumentation is performed by an anterior approach. In the postoperative follow-up it was observed that the patient's complaints were relieved.

Conflicts of Interest: The authors declared no potential conflicts of interest with respect to the research, authorship, and/or publication of this article.

Funding Sources: The authors received no financial support for the research, authorship, and/or publication of this article.

Intentional re-implantation in a left mandibular second molar with broken file in apical third of mesiobuccal root: A case report