An unusual case of intestinal obstruction due to Meckel’s diverticulum with vitelline cyst: Case report

Meckel's diverticulum (MD)1, the most common congenital anomaly of the gastrointestinal tract, occurs in 2% of the population with males being more symptomatic than females.  In this case, a 32-year-old male presented with sudden onset colicky abdominal pain, bilious vomiting, and absolute constipation. Emergency laparotomy was done on his virgin abdomen, as a result MD and vitelline cyst along with a fibrous cord connecting the two were identified. Knotting of an ileal loop around this cord had resulted in intestinal obstruction. Meckel’s diverticulectomy, along with cord resection, was carried out. The patient made smooth recovery and was discharged on the fifth postoperative day with no complications. The importance of this study is to highlight the case of symptomatic MD in an adult male as it can be a cause of intestinal obstruction and should always be considered in a patient presenting with symptoms of intestinal obstruction.

Meckel’s diverticulum (MD), the most common congenital malformation of gastrointestinal tract, occurs due to persistence of congenital vitello-intestinal duct. It has a reported prevalence of 0.3% to 2.9% in general population.1 It arises from the anti-mesenteric border of the ileum and receives its blood supply from the remnants of the vitelline artery.2 Being a true diverticulum, anatomically, it contains all three layers of the small intestine. Most Meckel’s diverticula are asymptomatic and according to some reports, MD has a male predominance.1,3 Symptomatic MD, which is more common in children than in adults, presents as intestinal haemorrhage, inflammation, and obstruction.4 Intestinal haemorrhage is diagnosed if the patient has gross or microscopic rectal bleeding. Inflammation is manifested as local abdominal pain or signs of peritonitis and may progress to gangrene, and perforation. Intestinal obstruction presents as abdominal pain with bilious vomiting, and may be due to intussusception, adhesion, hernia formation, torsion, and twisting around the fibrous band.5

We report a case where the patient presented with signs and symptoms of intestinal obstruction. On emergency laparotomy, MD connected to vitelline duct by fibrous cord was incidentally detected.

A 32-year-old male patient presented in the emergency department of PNS Shifa Hospital, Karachi, on April 26, 2021, with the complaint of abdominal pain of one day duration. Pain was severe in intensity, non-colicky, continuous, and associated with bilious vomiting and absolute constipation. The patient had a past history of homogeneous complaints two years back which resolved with conservative management. The patient had no previous history of abdominal surgery. On examination, the patient was afebrile, fully conscious, and well-oriented. The patient’s pulse was 64 beats/min and irregular. The abdomen was tense, distended, tympanic, non-tender, and the bowel sounds were exaggerated. On DRE, anal tone was normal with an empty rectum. X-ray of the abdomen on erect and supine posture showed few air fluid levels and distended small bowel (figure 1), favouring small bowel obstruction. Ultrasound of the abdomen was normal. 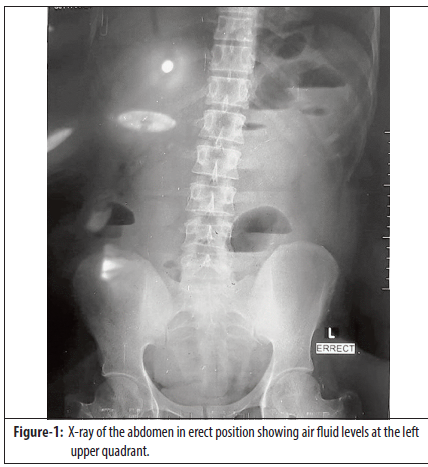 Emergency laparotomy was performed. Upon opening the abdomen layer wise, MD was identified (Figure 2). Just below the umbilicus, a vitelline cyst was also present which was connected to MD by a fibrous cord. The twisting of small bowel loop around this cord resulted in intestinal obstruction. Wedge resection of MD was done, and it was repaired by interrupted 3/0 Vicryl extra mucosal sutures to create a water-tight seal. Adhesiolysis of fibrous cord was performed by untwisting the intestinal loop twirling around it. Abdominal cavity was washed with 1-2 litres of normal saline. The abdomen was then closed as single layer en mass. 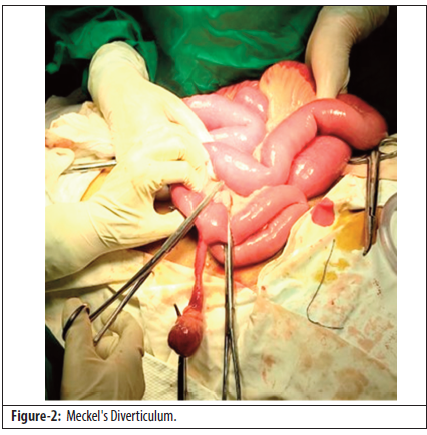 Post-operatively, the patient was kept NPO for three days and he passed flatus/stool on day four. The patient made a smooth recovery and was discharged home on the fifth post-operative day.

Meckel's diverticulum, a vestigial remnant of omphalomesenteric (also known as vitello-intestinal) duct is the most prevalent congenital anomaly of the gastrointestinal tract. It arises due to the failure of obliteration of vitello-intestinal duct when the placenta takes over the role of providing nutrition to the foetus in the fifth to sixth weeks of gestation. Despite its prevalence, the disease remains non-problematic as there is only a slight chance (4.2%) for asymptomatic Meckel’s diverticulum to become symptomatic in a lifetime, peculiarly in male infants.6 Age was significant in our case, as the patient presented in adult life with MD and its symptoms became troublesome for the second time in a short span of two years.

The rare symptoms which present in this age group are mostly related to the complications of MD. Topping the list is diverticulitis (35.1%) and obstruction (35.1%) followed by Gastrointestinal bleeding.7 MD also mimics acute appendicitis, that is why it is considered as ‘left sided appendicitis’.8

Preoperative diagnosis of MD is considered a diagnostic dilemma due to its vast spectrum of presenting complaints, especially if it’s not intestinal haemorrhage.  Considering the presenting complaint, MD is investigated initially via upper gastro endoscopy or colonoscopy along with usual biochemical and haematological investigations. Laparoscopy is the gold standard in doubtful cases but Technetium-99m pertechnetate scan is the most common non-invasive modality used, though it has a drawback of only 62.5% sensitivity in adults. In our case, Meckel’s scan or CECT3 abdomen could not be carried out as we had to resort to laparotomy to relieve the intestinal obstruction.

The treatment of incidental Meckel’s diverticulum is a debatable topic as not much is known about its peculiarities. However, complicated MD is currently being treated by diverticulectomy, wedge or surgical resection, laparoscopically or via laparotomy.6

The choice of type of surgery depends on integrity of diverticulum base and adjacent ileum and the presence and location of ectopic tissue. If MD is presented as incidental clinical finding and is asymptomatic, researchers have conflicts related to its removal before it causes any serious complications.

MD as a cause of intestinal obstruction is almost always an incidental finding. Diverticulectomy by wedge resection or linear stapling is considered as optimum management, either laparoscopically or by laparotomy.

Our case is unique because the literature is sparse in MD with a cyst underneath the umbilicus connected by a cord-like stalk.

Though MD is the most common congenital anomaly of gastrointestinal tract, it is rarely seen in clinical practice. This case report highlights the importance of considering MD as a cause of acute intestinal obstruction especially in young adults.

Triad of minimal antenatal care, pre-eclampsia and dementia in rural women: A deep insight and call for awareness

Myocarditis following administration of COVID-19 Vaccine: Should we be worried?