Management of an extensive frontal pyocoele using an external approach: A case report

Pyocoeles of the paranasal sinuses are pus-filled cavities seen in the sinuses and develop from the infection of the mucocoeles. Pyocoeles most commonly form in the frontal sinus. Endoscopic Sinus Surgery is currently the mainstay of the treatment.

We present the case of an 85-year-old female who presented to the ENT OPD of Jinnah Hospital/AIMC, Lahore, in October 2017 with complaints of progressive symptoms of intractable left frontal pain, double vision, and an associated swelling below the medial half of the left eyebrow. A CT scan was done and a diagnosis of extensive frontal pyocoele was made. She was treated successfully with an external approach and remained without any complications till 13-month follow-up after surgery; exceptional cosmetic results were achieved.

We wish to bring attention to the possibility of an external approach being used as a primary intervention, if deemed appropriate.

Frontal pyocoele is a pus-filled cystic lesion within the sinus wall. It usually develops from the infectious invasion of the existing mucocoele, which develops due to the obstruction in sinus drainage resulting from stenosis of the sinus ostium. Recently, frontal pyocoeles are frequently approached and treated through endoscopic sinus surgery.1 We present a case of extensive left frontal pyocoele with exposed dura and also erosion of the roof of the left orbit, which was treated with a more conventional external approach with minimal external scar.

An 85-year-old obese and hypertensive female, resident of Lahore, presented to the ENT OPD of Jinnah Hospital/AIMC, Lahore, in October 2017 with complaints of progressive symptoms of intractable left frontal pain, double vision and an associated swelling below the medial half of the left eyebrow (Figure 1a). The swelling had developed 10 months ago, and was initially asymptomatic until three weeks before presenting at Jinnah Hospital. During these three weeks, she had taken three courses of antibiotics without improvement. 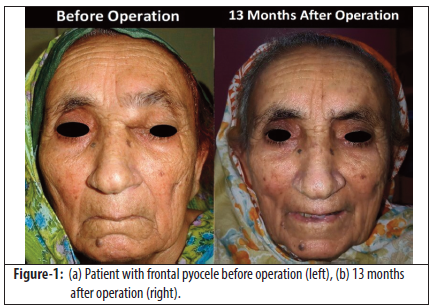 There was also no previous history of nasal disease or surgery.

On examination, there was marked local tenderness over the swelling of the left frontal sinus. The left eyeball was slightly proptosed with limited movement in all planes and diplopia on lateral gaze. There were no clinical features suggestive of intracranial involvement. Facial scars were seen close to the affected area from which we can justifiably assume that previous facial trauma may be the precipitating cause. Other ENT examination was unremarkable. On nasal endoscopy, nasal cavities were normal.

Contrast enhanced CT of paranasal sinuses and brain-axial and coronal views, showed an expanded, opacified left frontal sinus with erosion of its floor and posterior wall (Figure 2). The rest of the nose and paranasal sinuses were normal. 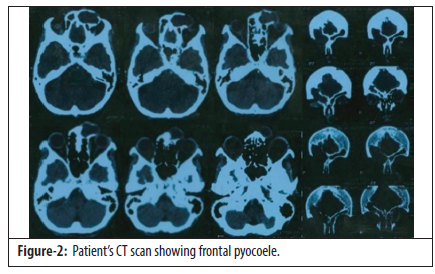 A provisional diagnosis of extensive left frontal pyocoele was made, based on the history, clinical features and supportive CT findings of obvious mass effects — expanded sinus with bony remodelling of the sinus wall and peripheral contrast enhancement.

She was commenced on triple regime—IV Cefuroxime, Metronidazole, and Co-amoxiclave—and was listed for exploration and drainage/clearance of the left frontal sinus pyocoele under general anaesthesia as an urgent case.

Routine pre-operative baseline investigations were carried out and the general health was optimised. A preoperative review was done by an ophthalmologist. There was no optic nerve compression or visual loss.

Under GA, after left temporary tarsoraphy, left frontal sinus was approached by left eye brow incision. A bony defect of 2cm x 3cm at the roof of the left orbital wall was noted and was used to approach the pyocoele. The pyocoele was decompressed by needle aspiration and pus was sent for Gram staining and culture sensitivity. After needle decompression, a small nick was given in the false capsule of the pyocoele sac and infected debris was cleared by gentle suction. Then the sac of the pyocoele was separated from the surrounding bone under direct vision and a bony defect of size 2cmx1.5cm was noted at the posterior sinus wall with exposed dura. The pyocoele sac was removed en bloc and sent for histopathology. The mucosa of the left frontal sinus was completely stripped off.

The exposed dura was covered with temporalis fascia, which was supported by surgicel and pieces of spongostan.

The post-operative period was uneventful.

Triple regime of IV Cefuroxime, Co-Amoxiclav, and Metronidazole was stopped on the fifth post-operative day and oral Co-Amoxiclav was started for a week. The patient was discharged home after one week post-operatively. At 13-month follow-up, there was no recurrence of any sinus disease and exceptional cosmetic results. (Figure 1b)

Informed written consent was obtained from the patient for reporting the case.

A frontal pyocoele, which is a cavity containing pus and lined with epithelium within the frontal sinus,2 forms when an existing mucocoele is infected. Mucocoeles form due to the occlusion of the drainage of the sinus ostia which may arise due to nasal pathologies such as infection, allergy, trauma, previous surgery, and neoplasm.3,4 About 70% to 80% of all mucoceles of the paranasal sinuses arise within the frontal sinus.5,6 However, in our case there was no obvious precipitating cause of mucocele. Scars in close proximity to the sinus indicate that previous facial trauma may be the precipitating cause of the pyocoele in this case.

Usual presentations of frontal pyocoeles are pain, swelling, proptosis, lateral displacement of the eyeball, diplopia, ptosis, and loss of vision.7

CT scans are considered the gold standard diagnostic modality of pyocoeles and mucocoele like lesions on CT scans, which show rim enhancement, are suggestive of pyocoeles, as seen in this case (Figure 2).8

Prompt action was required in the management of the pyocoele as a delay may have lead to complications such as orbital abscess, meningitis, subdural empyema, cavernous sinus thrombosis, loss of vision, and even death.

1.       To avoid iatrogenic trauma to the frontal sinus ostia and frontal recess via endoscopic approach, due to the absence of nasal pathology.

2.       A left eyebrow incision was suitable to access the disease in our case, instead of traditional osteoplastic flap approach. The incision also resulted in invisible post-operative skin scar.

3.       The bony defect at the roof of the left orbit provided an excellent approach to the pyocoele, instead of creating another hole in the anterior wall of the frontal sinus via frontal trephine.

5.       Open approach facilitated stripping off the mucosa of the frontal sinus under direct vision to clear the sinus from mucus secreting mucosa, to prevent recurrence of mucocele/pyocoele, which avoided the use of sialastic drain in the frontal ostia for six months.

6.       In our approach, the exposed dura of the left frontal sinus was covered by temporalis fascia which was supported by surgicel and large pieces of spongostan, during the healing process. Both surgicel and spongostan are completely resorbed in 4-6 weeks.  Traditional frontal sinus obliteration was not done to avoid the risk of concealed recurrent disease in close proximity of the exposed dura of the left frontal lobe.

Our case highlights the various benefits of using an external approach in this particular instance. Surgeons should always consider the risks and benefits of different surgical approaches and select the most appropriate one that is tailored to individual cases. Traditional approaches should not be completely abandoned.