Objective: To determine the aetiologies of pancytopenia based on bone trephine biopsy among paediatric and adult patients.

Conclusion: Bone marrow biopsy helped in diagnosing all but 2 pancytopenic patients. Aplastic anaemia was the commonest cause in both paediatric and adult patients.

Blood comprises three major formed cellular elements; red blood cells (RBCs), white blood cells (WBCs) and platelets (PLT). Simultaneous reduction in all the three elements below the normal level is called pancytopenia, which is not a pathology in itself, but is a tool of unearthing the underlying pathology. This leads to serious illness in the patients, depending upon the degree of anaemia, leucopenia and thrombocytopenia. 1 Pathophysiology includes reduction in haematopoietic cell production, marrow replacement by haematopoietic or non-haematopoietic neoplasm, ineffective haematopoiesis or trapping of normal cells in hyperactive reticuloendothelial system. 2 Underlying aetiologies include aplastic anaemia, acute leukaemia and megaloblastic anaemia in paediatric patients, while hypersplenism, megaloblastic anaemia, aplastic anaemia, drug-induced hypoplasia, leukaemias and non-haematopoietic tumour are observed in adults. 3 Apart from the severity of pancytopenia, the underlying disease responsible determines the management, prognosis and outcome of the patient. 4 Detailed history, clinical examination, peripheral smear examination, and bone marrow aspirate along with trephine biopsy are immensely helpful in pancytopenia assessment. 5 Pancytopenia is a common haematological issue, but an appropriate diagnostic approach still remains unclear. 6 In Pakistan, a study among adults7 reported megaloblastic anaemia (40.9%) as commonest aetiology of pancytopenia, while another study8 identified aplastic anaemia (36%). One study9 reported hyperslenism (69%) as the cause of pancytopenia. A study comprising paediatric population10 revealed aplastic anaemia (28.3%) as the predominant cause, while another study11 identified acute leukaemia (42.2%).

Pakistan is a developing country with a fragmented healthcare system. Due to illiteracy, society norms, financial issues and prevalent quackery, the underlying cause of a disease often remains undiagnosed. The current study was planned to determine the aetiologies of pancytopenia based on bone trephine biopsy among paediatric and adult patients.

The retrospective cross-sectional study was conducted at the Haematology Department of Aga Khan University Hospital (AKUH), Karachi, and comprised data from June 1, 2016, to October 31, 2019. The AKUH laboratory is accredited by the College of a Pathologist (CAP) and has 291 outreach collection centres along with 13 stat labs where bone marrow procedures are performed. As such, the main laboratory receives samples from inpatient and outpatient from all over Pakistan. 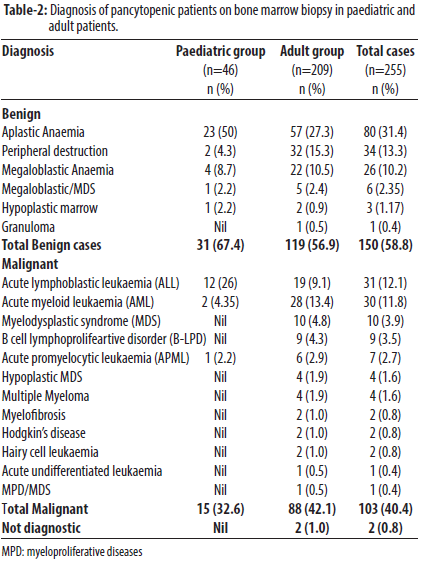 Overall, pallor was the most frequent sign 233(93.2%), followed by splenomegaly 33(13.2%), while examination was unremarkable in 13(5.1%) patients. The commonest aetiology was aplastic anaemia in both paediatric 23(49%) and adult 57(27.4%) groups, followed by acute lymphoblastic leukaemia (ALL) in 12(26%) paediatric patients, and normal marrow suggesting peripheral cause of pancytopenia in 32(15.3%) adults.

Pancytopenia is a serious haematological problem that leads to anaemia-related complications, infections and bleeding in the patient simultaneously. Bone marrow biopsy is a safe and simple procedure that can be performed as an outpatient case, but is an important diagnostic tool in evaluating these patients. Aetiology of pancytopenia varies according to age, geographical location, nutritional status, prevalence of infections and exposure to drugs or myelotoxins.1

The current study evaluated the largest series of cases including both paediatric and adult patients in contrast to previous studies from Pakistan that were limited either to the paediatric group10,11 or adult patients. 7-9,12-14

The male predominance in all age groups in the current study is in line with previous studies from Pakistan and India, but male-to-female ratio was reported equal in studies done in Nepal and Yemen. 15,16 This could be secondary to patriarchy in these countries that leads to increased presentation of males to hospitals compared to the females.

The majority in the current stydy was young (33%), which has been reported earlier as well. 17

The presenting symptoms in the study were similar to a study18 but contrasting findings have also been reported. 19,20 Pallor as the frequent presenting sign was also similar to previous studies. 7,11,13,18 Anisocytosis, poikilocytosis and macrocytosis were commonly seen in peripheral smears, but Gupta M, et al. 20 reported anisopoikilocytosis as the frequent feature.

Frequent aetiology of pancytopenia in the current study was aplastic anaemia in both paediatric and adult patients. Other studies reported aplastic anaemia varying from 28% to 36%.1,8,10,13,14 Aplastic anaemia is an immune-mediated destruction of haematopoietic stem cells. This immune response is triggered by exposure to myelotoxic drugs, infections, chemicals or radiation. Incidence is approximately two per million per year in the West, while it is estimated to be two to three times higher among the Asians. The incidence in Pakistan is heightened because of exposure to agricultural pesticides/chemicals, easy availability of over-the-counter (OTC) drugs without the prescription of registered medical practitioner and visiting quacks whose prescribed formulations can lead to aplastic marrow.

In the current paediatric group, 32.6% presented with haematological malignancies. Shinwari, N, et al. 18 and Jan, AZ, et al. 10 reported acute leukaemia as the second commonest cause, while Khan FS et al. 11 reported acute leukaemia as the most frequent cause among paediatric patients. In the current adults, peripheral destruction was the second commonest aetiology in 15.3% patients while it was only 4.3% in children. Bone marrow in these cases showed trilineage haematopoiesis, and pancytopenia may be secondary to underlying autoimmune diseases, drugs, infections or hypersplenism. Hypersplenism is characterised by cytopenias, splenomegaly with increase in marrow precursors along with correction of cytopenias after splenectomy. 21 Among 34 patients, 17(50%) had splenomegaly and 6(17.6%) had chronic liver disease. In contrast, Hamid et al. 22 and Ashraf S. et al.9 reported hypersplenism as the commonest cause of pancytopenia; 45.3% and 68.3% respectively.  However incidence of hypersplenism variedfrom15.3% to 22.5% in other studies. 13,14

In contrast to ALL in paediatric cases, AML (13.4%) was the frequent malignancy in the current adults. Makheja, KD, et al. 12 also reported AML in 27.4% adults. However, ALL (9.1%) was less common compared to the paediatric group. APML was also observed in 6(2.3%) adults, showing bone marrow infiltration with abnormal promyelocytes and highly granular blasts having faggot cells. Megaloblastic anaemia was observed in only 8.7% paediatric and 10.7% adult patients in the current study. Previous studies from the region reported megaloblastic anaemia incidence varying from 27% to 68%.5,7,12,17,18,20 The reason in developing countries might be poor intake due to poverty, pure vegetarian diet due to religious belief, poor cooking habits, parasitic infestation, malabsorption states and inflammatory diseases of gut. Presence of oval macrocytes and right-shifted neutrophils in peripheral smear along with reduced vitamin B12 and red cell folate levels are important for diagnosis. In the current study, 80.7% subjects presented with pallor, while oval macrocytes on smear and megaloblasts in bone marrow were seen in all cases, while right-shifted neutrophils was seen in 21 cases, and dysmyelopoietic features, including giant bands, were observed in 22 cases. Comparatively, decreased incidence in the present study might be due to fact that patients with megaloblastic anaemia are diagnosed and treated based on peripheral smear findings, low vitamin B12 and folate levels. Hence, bone marrow is avoided. Studies done in Yemen, Nepal and New York in the United States also showed less frequency of megaloblastic anaemia. 15,16,22 Features intermediate between megaloblastic and MDS were observed in 2.3% cases and were advised for haematinic trial followed by cytogenetics if cytopenias persists.

Hypoplastic MDS was seen in 4 patients. Hypoplastic MDS refers to a morphologic feature in which the marrow cellularity is low for age (<30% cellularity if age <60 years or <20% cellularity if age >60 years), can be misdiagnosed as aplastic anaemia. 23 Bone marrow of 4 patients showed diffused infiltration with plasma cells along with gross rouleaux formation on smear and diagnosed as multiple myeloma. Previously, incidence was reported to be 0.58% and 2.35%.1,13 Multiple myeloma is characterised by clonal proliferation of plasma cells in the bone marrow, which leads to suppression of normal haematopoiesis, bony lytic lesions, renal failure and recurrent infections. Multiple myeloma can present as pancytopenia, so patient should be investigated if there is high suspicion to avoid treatment delay. 24 Two patients were diagnosed as primary myelofibrosis with diffuse fibrosis observed on trephine biopsy. Previously, it was reported in new onset pancytopenia with incidence of 3.2%.25 Trephine biopsy of 2(1%) patients revealed large atypical Reed Sternberg cells and were diagnosed as Hodgkin’s lymphoma. Previously, Hodgkin’s disease was diagnosed in 2.1% patients with pancytopenia in Pakistan. 17 Splenomegaly and infiltration with lymphoid cells having hairy cytoplasmic projections with fried egg infiltration pattern on trephine biopsy was noted in 2 patients. Weinzierl et al. reported it to be 2.3%.25 Ashraf S. et al.9 found hypoplastic marrow in 6.6% cases. Tuberculous granuloma on trephine biopsy in 1 patient presented with fever, weakness and weight-loss in the current study. Granulomas have also been reported in pancytopenia patients in previous studies with incidence varying from 1% to 8%.1,11,17 However, higher incidence has been reported in a study done in Balochistan among pancytopenia patients; 21%.19 Tuberculosis is frequent in Pakistan and must be considered in differential diagnosis of patients with pancytopenia, weight-loss and fever.

Pancytopenia is the representation of a variety of malignant and non-malignant disorders. Aplastic anaemia is found to be the commonest cause of pancytopenia in both adult and paediatric patients, followed by ALL in children and peripheral destruction in adults. History, physical examination, peripheral smear examination and bone marrow biopsy are significant tools for appropriate diagnosis.