Epidemiology and complications of snakebite in rural area of Badin and Thar Sind, Pakistan

Objectives: To identify the population at risk of snakebite, the peak season and the site of bite.

Method: The retrospective study was conducted at the Indus Hospital, Badin, Pakistan, and comprised data of patients bitten by snake between January 2017 and December 2020 in the rural area of the Sindh province who presented to the emergency room and were treated according to the institutional protocol. Data was collected on a structured proforma. Data was analysed using SPSS 21.

Conclusion: Morbidity and mortality by snakebite was found to be prevalent in the study site, calling for preventing strategies.

Snakebite is a threat to public health in many parts of the world, especially in the rural tropics where snakes are most abundant. There are more than 3,000 species of snakes in the world, and, of them, some 600 are venomous and over 200 are considered medically important. It is estimated that nearly 5.4 million people are bitten each year with up to 2.7 million envenomation, causing mortality in 81,000 to 138,000 cases. Morbidity is also enormous and around 400,000 amputations and other permanent disabilities occur annually. The most fearful complications of venomous snakebites are muscle paralysis that may arrest breathing, bleeding disorders that can lead to life-threatening bleeding, irreversible kidney injury and tissue damage that can cause permanent disability and limb amputation.1

In Pakistan, snakebite cases are mostly reported from the Indus valley area of Punjab and the Indus delta in Sindh. These areas represent the hub of agricultural activity, accounting for 95% of national agrarian activity.4   District Badin is along the site of Indus delta, and comprises five tehsils, or talukas; Badin, Matli, Golarchi (Shaheed Fazil Rahu), Talhar and Tando Bago.5   The total area of the district is 6726 square miles, with a population of 11,36,044 persons, according to the 1998 census, divided into 52.60% males and 47.40% females. Overall, 16% population lives in urban and 84% in rural areas.6 The district has both private and public health facilities, but snakebite cases are solely managed by government hospitals. 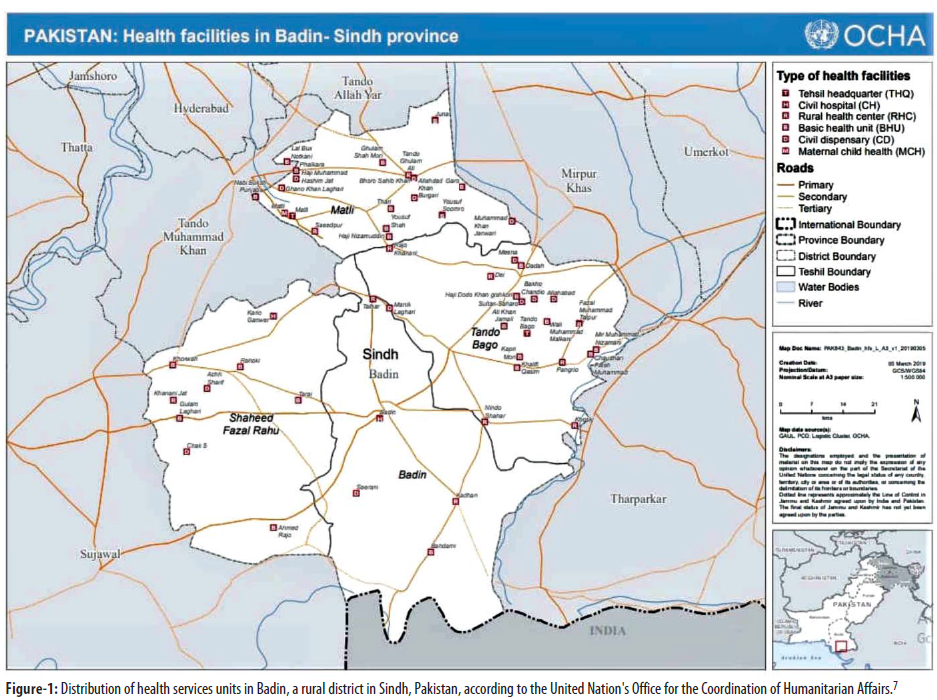 In assessing the relative risk of each species, the WHO has classified them into two major categories. Category 1 includes snakes of highest medical importance, defined as highly venomous snakes that are common or widespread and cause numerous snakebites, resulting in high levels of morbidity, disability or mortality. Category 2 includes snakes of secondary medical importance, defined as highly venomous snakes capable of causing morbidity, disability or death, for whom exact epidemiological or clinical data may be lacking; and/or are less frequently implicated due to their activity cycles, behaviour, habitat preferences or occurrence in areas remote to large human populations (Table-1). 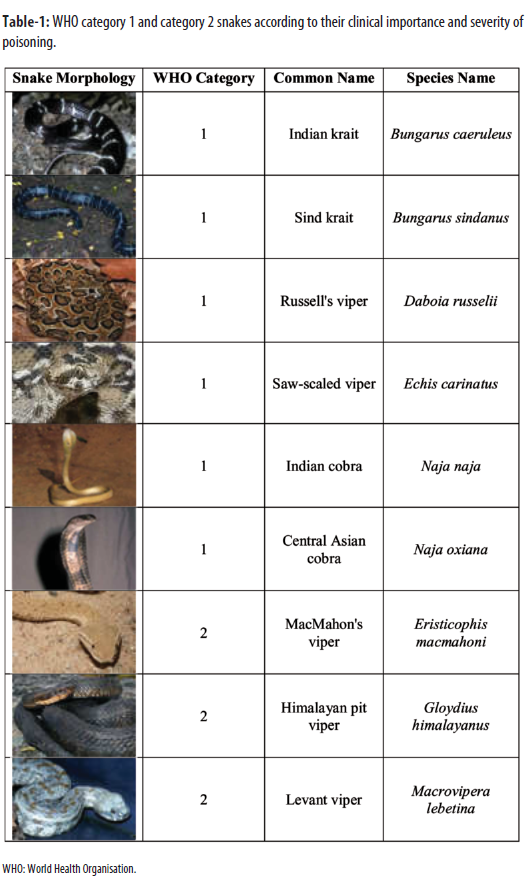 In the lower Indus valley, Bungarus Sindanus (Sindh Krait), Naja naja (Indian Cobra) and Daboia russelii (Russell's viper) are the main offenders, while Echis carinatus (Saw-scaled viper) is confined to more arid areas.4   Data from the developing countries, especially from Pakistan, is sparse, but it is reported that snake envenoming causes considerable morbidity and mortality in peripheral and distant areas.9,10  Despite its significant health hazard, it had remained neglected until 2007 when the WHO included snakebite in its list of "Neglected Tropical diseases".11   Massive efforts have been carried out by the WHO in this context, like the supply of anti-snake venom (ASV) and the declaration that snakebite management was a global public health emergency. ASV immunoglobulins (IGs) were included in the "WHO Model List for Essential Medicines", and the WHO has also encouraged countries to ensure their national ASV stocks.12  Unfortunately, in spite of all these efforts, snakebite has still not captured attention on international public health agendas.13

The current study was conducted to identify the population at risk of snakebite, the peak season, the site of bite, and treatment.

The retrospective study was conducted at the Indus Hospital, Badin, Pakistan, and comprised data of patients regardless of age or gender bitten by snake between January 2017 and December 2020 who presented to the emergency room (ER).

After approval from the institutional ethics review board, data was collected using a structured proforma related to history, clinical examination and laboratory investigations. All the patients had received standard treatment of snakebite in line with the institutional protocol.

Data was analysed using SPSS 21. Cleaning and coding of data was done prior to analysis. Frequencies and percentages were used to express categorical variables, while mean ± standard deviation (SD) were used for continuous variables. P<0.05 was considered statistically significant. 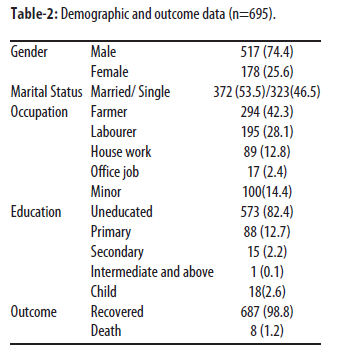 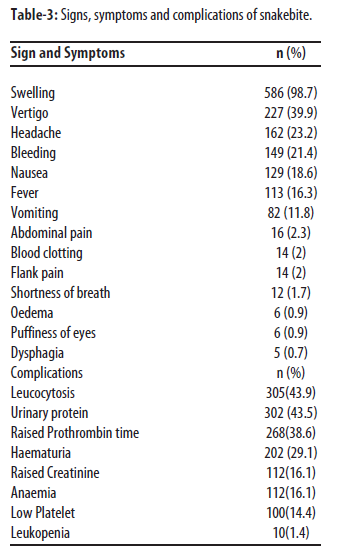 Most of the patients had been referred from different areas of Badin, followed by the adjacent district of Thar which mostly comprises desert area (Table-4). 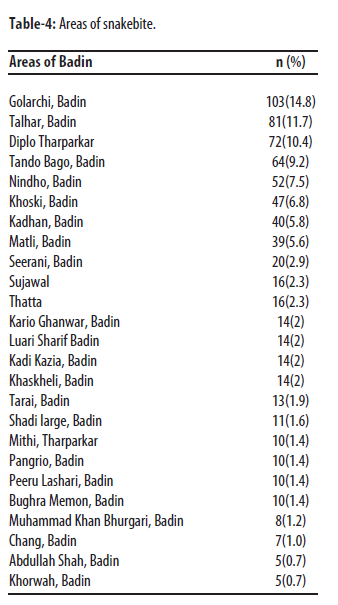 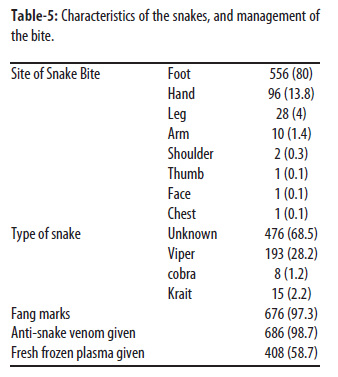 Maximum number of cases took place in the peak summer month of July 112(16.1%), followed by August 102(14.7%) and June 87(12.5%) (Figure-2). There was male predominance among the victims (Figure-3) across the year. In terms of age distribution in all incidents in months of the year, those aged 15-30 years suffered snakebite the most 309(44.5%), followed by the 31-50 years age group 209(30.1%). All these young individuals were bitten mostly in July, followed by June and August (Figure-4). Farmers were predominantly attacked by snakes regardless of the month, followed by labourers. In terms of age and gender, majority of the bites took place in July 47(42%) (Figure-5). 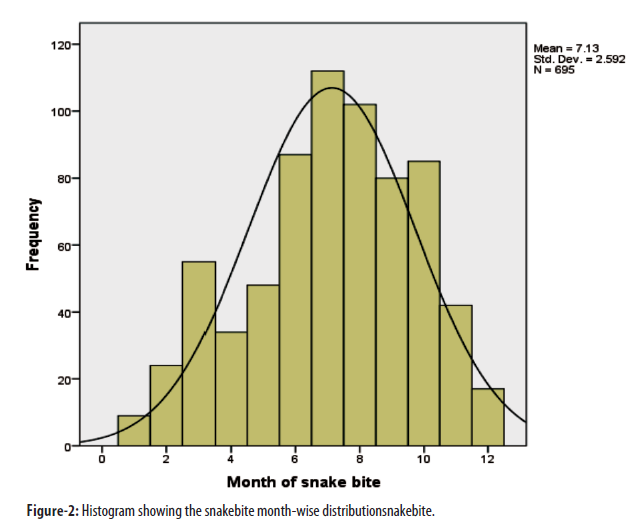 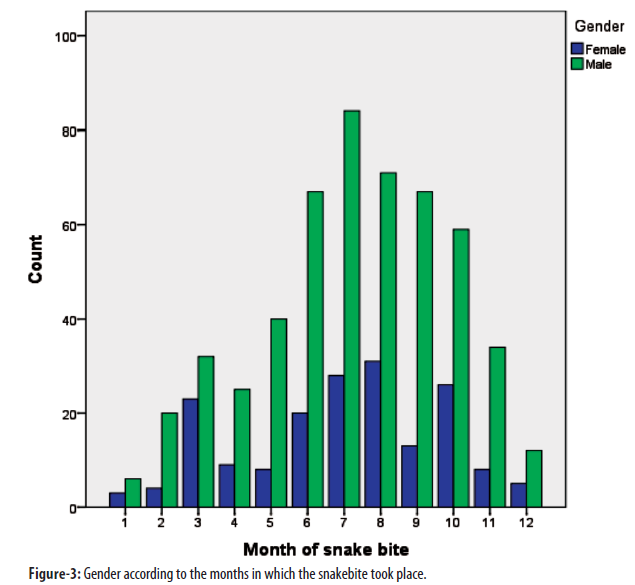 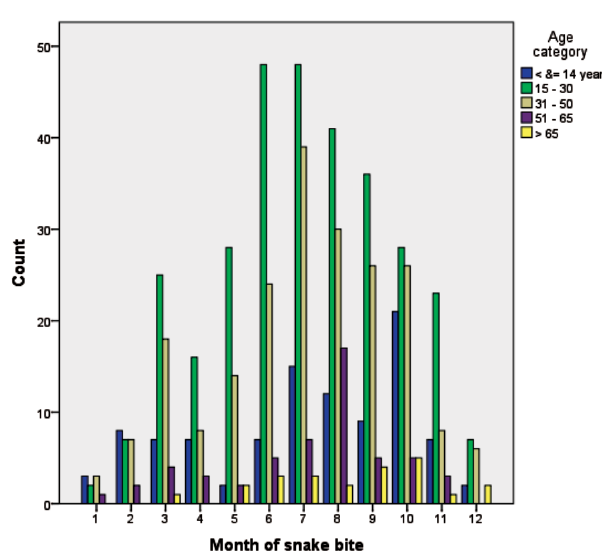 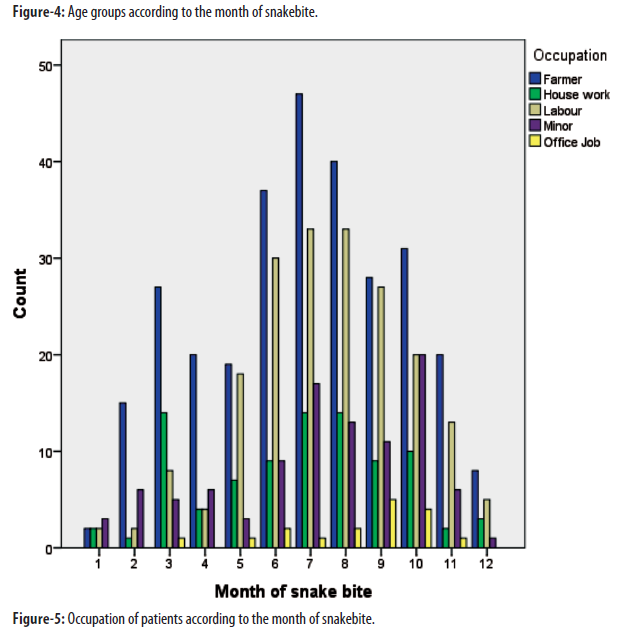 To our knowledge, the current study is the first done locally with aim of suggesting a strategy for prevention against snakebite. All the patients who had deranged coagulation received ASV. Eight of the patients died, and all of them after reaching the hospital before any intervention could take place. True incidence of mortality is therefore difficult to measure as a good number of patients died before reaching the hospital.

The study data indicated that majority of the patients were farmers and labourers work in farms, and majority were young aged 15-30 years. This is consistent with earlier studies done.14-16  In the current study, 16% patients developed acute kidney injury, and, although long-term follow-up was not part of the study, their outcome was poor. In an observational study in Sri Lanka comprising 54 patients with acute kidney injury following snake envenoming, 34(63%) regained normal kidney functions after one year and 20(37%) developed chronic kidney disease.17   In an observational study in India comprising 42 patients with acute kidney injury post-snakebite, there were 5 who underwent renal biopsy, and showed acute interstitial nephritis. Of the 42 patients, 4 developed chronic kidney disease stage 3-5D, 4-10 months after the bite.18

In Pakistan, Suleman et al. reported snakebite data of 771 cases collected from 7 health facilities between 1995 and 1996 from the Thar desert. Majority (70%) of the patients were male and their mean age was 27.8 years. Almost all of the patients had local tissue swelling and haemorrhage, most of them had fang marks, and one-third of the patients developed hypotension and shock. Three of the patients slipped into a comatose state and 4 deaths were reported with an overall mortality of 0.5%. The findings were similar to those of the current study, including the fact that the highest frequency (75%) of snakebite cases were reported between June and September. The site of the bite was on the lower extremities (87%) in the earlier study. Besides, 513(67%) cases were bitten by poisonous snakes, including Echis carinatus and cobras, which was different from the data.19   The difference could be explained by the difference between the geographical landscape of Thar and Badin, as cobras predominantly are found in arid areas, like Thar. The other striking aspect of both the datasets is the similarity of demography and frequency of incidence which unfortunately did not change over 25 years.

In the light of the findings, it is clear that there is a need of active participation of governmental and non-governmental organisations (NGOs) to prioritise preventive steps against snakebite.

Awareness campaigns are critical, especially across the four months from June to September.

The provision of long boots to the target population, along with counselling to use them while entering their fields shall also be initiated. The government should make it mandatory to wear long boots, as is the case with helmets to ensure protection against road traffic accidents and industrial accidents. This should be the case for at least the four critical months, and the lack of boots should be labelled as a work hazard. This will require the involvement of family members and landlords to improve adherence.

ASV in adequate quantity for 24 hours should be available, especially in the four critical months at all dispensaries and health units. Besides, responsible persons should be identified in distant areas where ASV availability is difficult, and training of injecting ASV must be provided so that a trained person can inject at least a few doses of ASV before patients reached the hospitals even with delay in arranging transportation.

Emergency ASV helpline must be put in place to contact medical teams.

Also useful would be the development of ASV distribution programme tailored to the need and epidemiological situation of the rural areas of Sindh.

Implementation of financial initiatives guaranteeing the acquisition of adequate ASV volumes at affordable prices in the affected areas, and implementation of social support programmes to identify and assists people whose snakebites resulted in chronic disabilities and loss of job.

There is a need of doing extensive community-based and multicentre hospital-based studies to get a clear picture of the incidence and outcome of the affected population.

Finally, there is also a need of a central snakebite registry either at provincial or central level which will help understand the actual scale of the problem and in the formulation of preventive strategies.

Snakebite is still a neglected disease in the country even though its burden is huge and persistent and is mostly confined to young males working as farmers or labourers in the agricultural fields during the summers. There is a need to put in place prevention as well as treatment strategies from both government and private agencies.