Objective: To identify the association of maternal nutritional status with neonatal anthropometry.

Method: The multi-centre, cross-sectional survey was conducted at two government and 5 private hospitals in Lahore, Pakistan, from July 2016 to August 2017, and comprised mothers and their neonates. A semi-structured self-administered questionnaire was used along with data from patient files. Maternal nutritional status was assessed through biochemical profile. Standard procedures and safety measures were employed during data collection of neonatal anthropometric measurements. Data was analysed using SPSS 22.

Results: Of the 800 subjects, 407(50.9%) were from government hospitals and 393(49.1%) from private hospitals. The mean maternal age was 27.72+14.42 years. Among the neonates, 365(45.6%) were girls and 435(54.4%) were boys. Significantly lower anthropometric measurements were noted in mothers with poor haemoglobin, haematocrit, red blood cell, fasting glucose levels as well as those with higher uric acid, and lower serum albumin, total protein, and in those with blood in urine (p<0.05).

Conclusion: Maternal biochemical markers were found to be critical in evaluating mothers at risk of delivering neonates with low anthropometric measurements.

Low birth weight (LBW) in neonates is of paramount significance for public health as they have lower chances of survival and lower potential for future growth and development. According to a United Nations Children's Fund report in 2019, across the globe the neonatal mortality rate was 37/1000 livebirths, whereas in South Asia it was 59/1000 livebirths. In Pakistan, the neonatal mortality rate was 42/1000 livebirths in 2018, and 251000 neonates died during the first 28 days of life.1   A high prevalence of LBW (35.1%) had been reported by the Pakistan Health and Demographic Survey (PHDS) 2012-13.2   More recent population-based data regarding LBW estimates was not available for Pakistan as 84% of the neonates were not routinely weighed at birth in Pakistan.1   The aetiology of LBW is multifaceted (Appendix).3 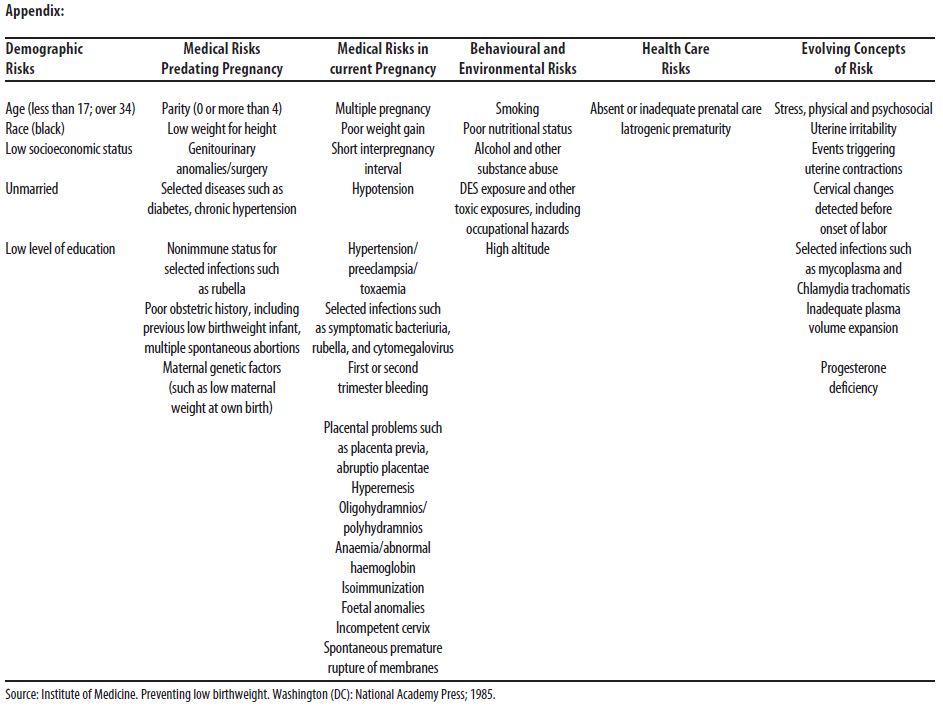 The maternal nutritional status is assessed through on anthropometric measurements, and assessment of biochemical profile, clinical signs and symptoms, and dietary history. Biochemical profile is an objective and precise measure of nutritional status. During pregnancy, reduced dietary intake leads to a lower intake of nutrients, especially the micronutrients necessary for optimal growth of the foetus. Among minerals, iron is the most prominent as it promotes the formation of new haemoglobin (Hb). Hb and haematocrit (HCT) measurements are routine procedures during antenatal care.4   A recent meta-analysis of 68 articles confirmed that maternal anaemia is a risk factor for LBW with an adjusted odds ratio (AOR) of 1.23 times.5 A prospective cohort6 found no association between birth weight and HCT, but another study reported that mothers of LBW neonates had lower mean HCT values.1 5

Neonatal anthropometry is a clinical tool for diagnosis of malnutrition in the foetal life and predictor of increased risk of metabolic diseases in adulthood.13   International and national statistics of LBW and neonatal mortality are alarming and warrant that modifiable risk factors be identified through contextualised systematic and thorough research.

The current study was planned to identify the association of maternal nutritional status with neonatal anthropometry.

The multi-centre, descriptive, observational, cross-sectional study was conducted at 2 government and 5 private hospitals in Lahore, Pakistan, from July 2016 to August 2017.

After approval from the ethics review board of Fatima Memorial Hospital Medical and Dental College (FMHMDC), Lahore, and permission from the provincial health Secretariat in Lahore, the sample size was calculated using an online calculator.14   According to the Central Intelligence Agency (CIA) World Fact Book, the population of Lahore in 2015 was 8.741 million, and the birth rate in 2017 was 21.9 births per 1000;15 or 191,428 neonates born every year. This number was used with 95% confidence level and 5% standard error for sample size calculation. A larger sample was selected, however, for more generalisability of the findings.

The sample was raised using two-stage sampling technique. In the first stage, convenience sampling was employed to pick up 5 government and 5 private, centrally located hospitals with large patient turnover. Medical superintendents of the selected hospitals were approached for permission which was granted by 2 government hospitals, Shaikh Zayed Hospital and the Services Hospital, and by all the 5 private hospitals; Fatima Memorial Hospital, Aadil Hospital, Prime Care Hospital, National Hospital and Naaz Hospital.

In the second stage, purposive sampling technique was employed to focus on postnatal women at the respective Gynaecology and Obstetrics wards who were consecutively enrolled. Women who were booked at the start of second trimester, had more than 4 antenatal checkups, and who had complete records were included. Neonates with congenital abnormalities, multiple births and still-births were excluded.

After taking informed consent from all the subjects, a predesigned semi-structured self-administered questionnaire was used to collect data on socio-demographic factors, maternal biochemical assessment and anthropometric measurements of the neonate. The questionnaire was filled by the researchers after retrieving data from patient files and assessing neonatal anthropometric measurements.

The socio-demographic variables were self-reported. Socioeconomic status was determined by inquiring about husband's monthly income and dependent family members. Per-person income/month was calculated by dividing the husband's income with the number of dependent family members and per-person income per day was calculated by further dividing by 30. Those earning less than $1.9/person/day were graded as living below the poverty line.16

Biochemical data was obtained from the patient's files. Data related to complete blood count (CBC) at the time of admission and pre-delivery was available for all patients. Fasting blood glucose (FBG), random blood glucose (RBG), serum creatinine, uric acid, albumin, and total protein levels had not been assessed across the board. CBC had been carried using a haematology analyser (SYSMAX K-21). FBG and RBG were assessed using the Hexokinase method,12   and serum uric acid by using the enzymatic colorimetric test.9   Serum albumin was assessed employing the Bromocresol Green Method,17   serum protein using the Biuret method,8 serum creatinine using the Jaffe-Slot modified alkaline picrate colorimetric method.18   The lowest cut-offs were used for CBC, FBG, serum creatinine, serum albumin, serum total protein, while the highest cut-off values were used for serum uric acid, considering the changed laboratory values in pregnancy.19   Blood in urine was recorded as 'yes' or 'no'.

The weight was taken by placing the neonate in an infant pan scale. The measurement was taken without clothing and diaper, and recorded in kilograms. The length of the neonate was measured on a measuring board. The headboard was fixed and the footboard was movable. The neonatal nurse held the head of the neonate, and the researchers straightened the legs and moved the footboard to the feet of the neonate and recorded the measurement.20   CC was measured at the nipple level at the end phase of expiration.21   HC was measured by a non-stretchable tape. It was placed around the head just above the eyebrows and around the occipital prominence at the back of the head. Length, head and CC were recorded in centimeters.20

To ascertain accuracy and quality of data, standard procedures and safety measures were employed during data collection and all other laboratory procedures. The collected data was checked daily for completeness and consistency. All measurements were taken within 24 hours of birth.

Data was anaylsed using SPSS 22. The data was not normally distributed, therefore, Mann-Whitney U and Kruskill Wallis tests were applied to compare ranks. P<0.05 was taken as statistically significant. 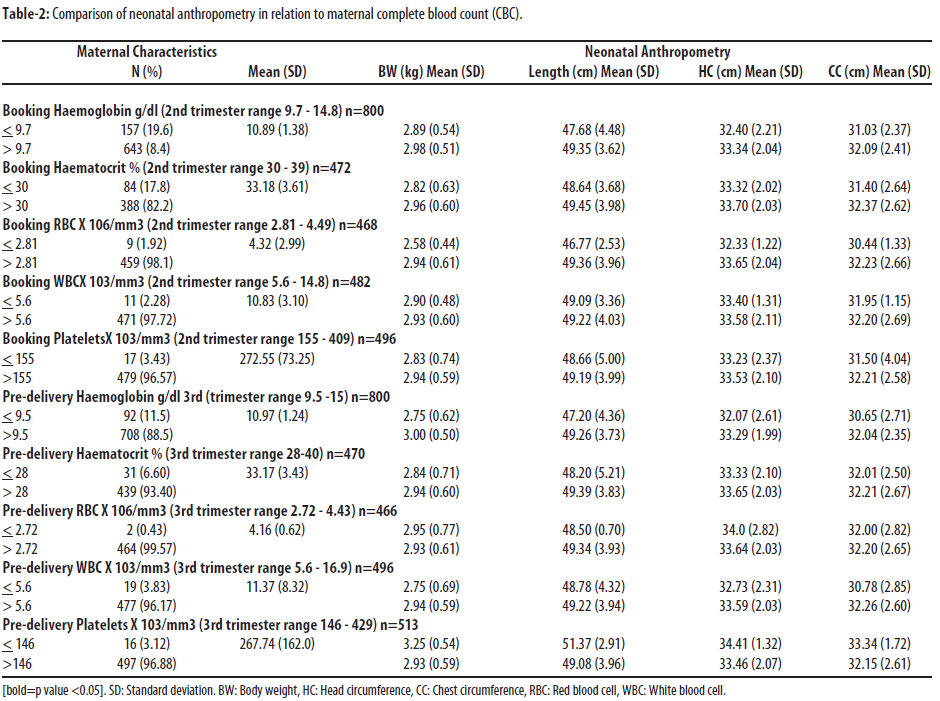 Significantly lower mean anthropometric measurements were observed among neonates born to mothers with lower FBG, serum albumin, total protein, and higher uric acid and who had blood in urine samples (Table-3). No participant had serum creatinine <0.4mg/dL, therefore its impact could not be calculated.

Intrauterine growth restriction and macrosomia had numerous short-term and long-term consequences. Mean anthropometric measurements in the current study were almost similar to the results obtained in low-income areas of Karachi earlier.22

The World Health Organisation (WHO) classifies anaemia as Hb <11g/dl, but pregnancy specific cut-offs19 were used to classify all biochemical assessment of the mothers in the current study. Hb <9.7 g/dl assessed at the first antenatal visit was associated with slightly lower anthropometric measurements of the neonate whereas pre-delivery Hb <9.5g/dl was associated with considerably lower anthropometric measurements of the neonate. Comparable results have been obtained nationally and internationally.5

The data highlighted that booking Hct, but not pre-delivery Hct was associated with lower anthropometric measurements. A lower cut-off for pre-delivery Hct <28%19 than booking Hct 30% could be the reason for no association. However, the results are in line with earlier findings.5

Booking RBC was associated with lower anthropometric measurements. On the other hand, lower booking WBC and platelets, and pre-delivery RBC, WBC were not associated with birth weight, length, HC and CC. Studies analysing the association between CBC and birth size could not be found. Systematic reviews and meta-analysis also have investigated only Hb level for analysing the effects of anaemia on neonatal birth weight.5,23

The present research demonstrated that mothers who had higher uric acid levels >4.9mg/dl had extremely lower neonatal anthropometric measurements. The findings are aligned with previous studies.9

Mothers who had fasting glucose >75mg/dl had higher birth weight, length and CC, and those having <75mg/dl had anthropometric measurements almost near the mean. The results are in concordance with earlier studies.11,12

A large, diverse and multi-ethnic sample, though the majority was Lahore-based (88.3%), was a strength of the current study as it included both urban and rural subjects as well as Muslims and minorities. Almost all previous studies were conducted at government hospitals, while the current data was collected from both public and private hospitals, reflecting varied socio-economic groups. Besides, the study collected data on four neonatal anthropometric measurements whereas majority of earlier national and international studies focussed on birth weight only. Also, the major confounder of antenatal care (ANC) was controlled as all women were receiving high-quality antenatal care.

The main limitation of the current study was that the sample was drawn from women visiting hospitals of Lahore, thus women who gave birth at private maternity homes or mother and child health (MCH) centres, or at homes with the help of midwives or traditional birth attendants (TBAs), were not included. United Nations Children's Fund in 20191 reported that in Pakistan, 66% of deliveries take place in a health facility, 86% of pregnant women had one ANC visit, 51% had minimum four ANC visits. Therefore, the current results are only generalisable to the 51% mothers and their neonates. Mothers who do not get an opportunity for ANC visits might differ on basic socio-demographic and nutritional characteristics.

Disclaimer: The text is based on a PhD thesis.

6.      KhoiganiMG, GoliS, HasanZadeh A. The relationship of hemoglobin and hematocrit in the first and second half of pregnancy with pregnancy outcome. Iran J Nurs Midwifery Res. 2012; 17:S165-70.