Prevalence of vocal tract discomfort in patients with voice disorders

Objective: To analyse the prevalence of vocal tract discomfort in patients with voice disorders.

Conclusion: Dryness, irritation and a lump in the throat were the most common symptoms of vocal tract discomfort.

Voice is sound, resonance and articulation, and is the most fundamental characteristic in human speech, being a tool necessary for communication in daily life. It gives sound to one's thinking, opinions, emotions and views, thus helping in conveying and sharing information.1   The vibratory movements of vocal cords modulate airflow coming through the lungs and are responsible for the production of voiced in contrast to unvoiced consonants like fricatives, plosives and whispers. Thus, the vocal tract provides special features to voice quality, including frequency, prosody as well as loudness.1   The quality of voice i.e., resonance is affected by the sound produced as a result of near field flow changes which contribute to inharmonic broadband of the sound spectrum. Thus, the whole vocal tract is involved in voice production and its quality, with amplitudes of sound pressure during flow, and at the inner airway surfaces showing the biggest output of sound generation taking place at 1-3 kHz.2   The human voice has some distinct features, like tone and phonetic quality, which relate to the hearing of the listener, and model which is related to the speaker. The phonetic quality has units of linguistics i.e., consonants, vowels and allophones; and supra-linguistic units i.e., rhythm, intonation and stress. The tone in voice refers to a person's emotional state i.e., how a person is saying something. The model is associated with an informative part of the voice, making sense to others.3   Voice quality is individualised, giving uniqueness to the voice. Hence, voice is a multimodal interactive process involving the fluid structure of glottis and acoustics. This integrative approach involves geometric as well as material properties of the airway including the larynx, vocal tract as well as lungs, with air pressure flowing from the lungs and out into the upper airway, providing functional air supply to the vocal system, where the vocal cord vibration manipulate the airflow and produce the output sound.1   This is a delicate process being performed by the vocal folds which are 3 layered structures around the glottis with its phonatory (anterior 2/3rd) and respiratory (posterior 1/3rd) areas.1

A voice disorder or dysphonia is said to occur when the pitch, quality, and/or loudness of the voice is not appropriate for age, gender, cultural origin, and location of an individual.4   Voice disorder is common in speech-language pathology practice. It has a high prevalence, ranging from 4.8% to 29.1% and a much higher prevalence in professional voice users with the prevalence of 55.15% for teachers, 40.53% for classical and 46.96% for non-classical teachers.5,6  It is estimated to be present in 3-9% of the American population with a point prevalence of 0.98%,4   with a higher prevalence in adult female population compared to the adult male population.4

Voice disorders can result from organic lesions resulting in structural abnormalities, like infectious or inflammatory lesions, benign and malignant pathology, traumatic and congenital anomalies. They also result from neurogenic causes, including damage to any central nervous system (CNS) or the sensory or motor pathways of the nervous system or muscular supply of phonatory system due to lesions of nerves or CNS. Functional issues include hyper- or hypo-functional dysphonia,7  while psychogenic causes, also known as phono-neurosis, result from anxiety, depression, neurosis, social, occupational as well as family conflicts.8

Patients with voice disorders can present with hoarseness, altered quality, reduced time or duration of phonation, effortful or fatigued voice, altered pitch or tone, reduced vocal range, pain during phonation, muscular stiffness, cramps,9   and lingual paresthesia.10  The initial warning signs that might indicate these disorders could be a feeling of a lump in the throat, dryness, irritation, tickling sensation, odynophagia, muscle tension and vocal tract discomfort (VTD). Neglecting the condition over a long period can deteriorate the social and occupational functioning and can affect mental health with exaggerated or amplified mood alterations, anxiety, tension and depression.11

Several factors can affect the voice quality, including professional voice usage, alcohol, patient's habits, gastroesophageal reflux disease (GERD), upper respiratory tract infection (URTI), age, gender as well as smoking which can even bring mucosal changes as well as other symptoms affecting voice.12   A high (72%) local prevalence of GERD13   and its risk factors, including late meals, reduced sleep, smoking and lying after dinner,14   are frequently noticed in the fasting month of Ramazan. A voice disorder can ultimately affect the quality of life of an individual. One aspect in the evaluation of the quality of life is discomfort or pain, and a link exists between voice production and vocal discomfort.15

The current study was planned to analyse the prevalence of VTD in patients with voice disorders.

The analytical cross-sectional study was conducted at Riphah International University, Lahore, Pakistan, from September 2020 to January 2021, while the patients were enrolled from Mayo Hospital, Sheikh Zayed Hospital and Jinnah Hospital, Lahore.

After approval from the institutional ethics review committee, the sample size was calculated using OpenEpi-Version 316 calculator while using population size 1 million (for finite population correction factor), confidence level 80%, anticipated frequency taken as 50% since it is unknown and design effect 1. The sample was raised using convenience sampling technique after taking permission from the administrations of the three hospitals from the outpatient departments (OPDs) of Ear-Nose-Throat (ENT) and Rehabilitation departments. Those included were voice disorder patients of either gender aged 18-65 years. Patients complaining of voice difficulties, but not diagnosed with voice disorders, like stammering, hormonal and psychotic disorders, were excluded, and so were those with incomplete data.

After obtaining informed consent from the patients individually, each patient was evaluated by relevant consultant, including ENT specialist, physician, neurologist and psychiatrist, for obtaining a medical diagnosis. This was followed by the collection of demographic data. A basic demographic sheet and the standardised Vocal Tract Discomfort Scale (VTDS)17 were used. VTDS is a standard tool to quantify VTD by rating symptoms on the basis of frequency and severity on 8 parameters; burning, irritable, dry, sore, tight, tickling, aching, and a lump in the throat. It is scored 0-6 on a 7-point Likert scale. Frequency is rated as 0 = never to 6 = always, while severity is rated as 0 - none to 6 = extreme.

The VTDS was applied individually on each patient and the results were recorded according to the frequency and severity level by a speech and language pathologist (SLP).

Data was analysed using SPSS 21. Descriptive statistics were utilised with frequencies and percentages calculated for sociodemographic and clinical variables, and mean and standard deviation for VTDS scores. Independent sample t-test and one-way analysis of variance (ANOVA) were used to evaluate associations. P<0.05 was considered statistically significant. 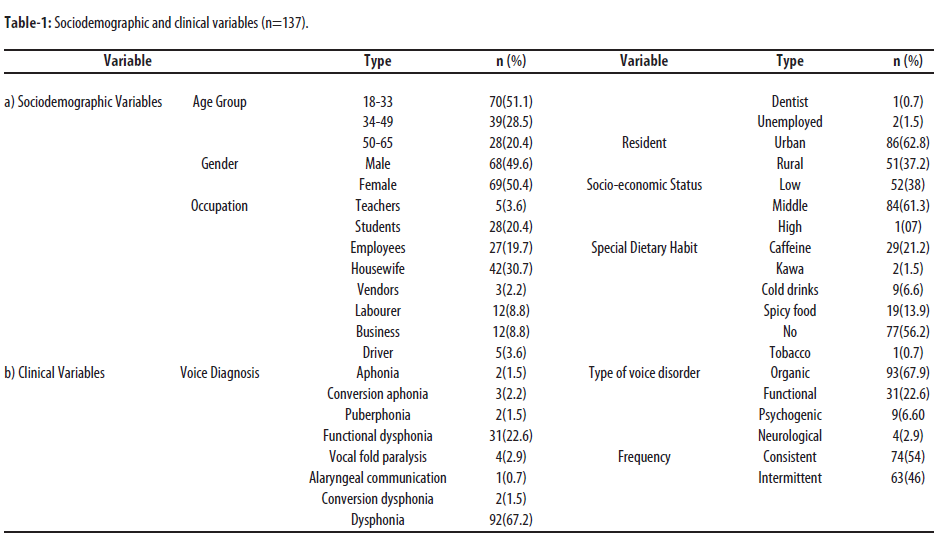 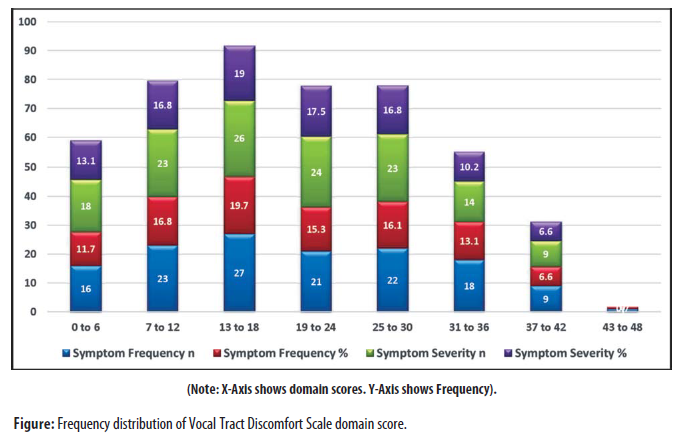 Darawsheh WB et al. utilised the VTDS for student singers and reported equal gender prevalence.15   Similarly, in the current study, the gender prevalence of VTD was nearly the same for both genders, with a majority of cases with VTD being females (50.4%). However, significantly higher scores for frequency (p=0.006) and severity (p=0.002) of VTD were noted for females. In contrast, other studies have reported a higher male-to-female prevalence of 2:118 and 4:1.19 However, keeping in view the fact that more females face stressful situations as housewives and teachers, etc., the higher prevalence of VTD scores in females is quite understandable.

In a study, a higher prevalence was reported in non-professionals, especially labourers.19   Similarly, the current study also found that most patients were non-professionals; (30.7% housewives and 20.4% students). This might be due to the fact that professional voice users are trained to use their voice safely, and they take more preventive measures.

The current study found that VTDs were most prevalent (61%) among the middle class and were least common (0.7%) for the higher social class. An Indian study suggested a higher prevalence of VTDs in the middle-class.19

The most prevalent disorder noted in the current study was organic lesions (67.9%), followed by functional disorders (22.6%), while psychogenic and neurological disorders were the least common. Similar results have been reported earlier,20   while contrasting numbers have also been reported.21   Lopes LW et al. reported organic lesions to be the most common, with 26.06% having laryngeal lesions, 45.15% benign vocal cord lesions, 10.61% neurological lesions and 10% reflux cases.22   Baitha S. et al. reported acute laryngitis to be the most common cause of hoarseness.18   Another study stated that most lesions were malignant, including glottis carcinoma, while among the benign lesions polyps were common.19

In the current study, only 3.6% participants reported to have gone through voice therapeutic training, while the remaining had not even consulted any voice therapist. Similarly, in a population-based study, only 3% cases had received training earlier in life.17

A study concluded that there was an association of type of voice disorder with frequency and severity of VTD.22   The current study found the highest mean symptom scores for organic lesion, followed by neurological disorders, functional lesions and psychogenic causes. Another study reported that different voice disorders present with different frequency and severity of VTD symptoms.24

In terms of limitation, the current study, owing to coronavirus disease-2019 (COVID-19) restrictions, faced many difficulties during data-collection, and complete data could be obtained from 137(84%) of the 163 subjects approached, indicating a low response rate. The findings cannot be generalised also because the study was carried out using non-probability sampling technique.

Disclaimer: The text is based on an MS, Speech Language Pathology, thesis.