Development of Banff Classification from 1991 to 2019 for identifying renal allograft rejection: A narrative review for nephrologists

Renal pathologists, nephrologists and transplant surgeons held a meeting in 1991 at Banff, Canada, and developed a classification scheme that standardised the international classification of renal allograft biopsies and called it the Banff Classification. Following the first meeting, 15 meetings were held, usually every two years, that revised the classification in the light of new evidence and techniques. The latest printed consensus was after the 2019 meeting in Pittsburgh in the United States of America. Several articles have been published in the last 30 years that have created ambiguities for nephrologists and have made things challenging for the expert pathologists. The current perspective review was planned to make it easy and clear for beginners and for practitioners how the Banff Classification has evolved since its inception.

Although a few classifications for rejections were present but were hardly in general use.2   Because of reporting variability in the description of renal graft biopsies, a new standardised classification was needed.

Renal pathologists, nephrologists, and transplant surgeons held a meeting at Banff and developed a standardised international classification of renal allograft biopsies which was published in March 1993.3   It not only had international consensus, but provided help in making a clinical diagnosis, and also permitted a judgment between research studies and clinical trials that investigated either the diagnosis, treatment or outcome in renal transplantation.4   Thereafter, the Banff group has been meeting biannually, last meeting being the 15th Banff Conference for Allograft Pathology held September 23-27, 2019, in Pittsburgh, the United States of America.5   Because new knowledge and techniques have been many and frequent, there have been many revisions of the classification. This has resulted in the Banff Classification of Allograft Pathology becoming the main classification system accepted all over the world6  . Following the first meeting in 1991, 15 meetings were held, usually every two years, which produced 13 articles till the last published consensus after the 2019 meeting in Pittsburgh.3,5,7-17

The 13 articles published may have created some confusion in nephrologists and pathologists, and a clear understanding of renal allograft rejection is of great significance not only for research but also in clinical practice. The current perspective review was planned to make it easy and clear to both the beginners and the practising nephrologists how the classification evolved since its inception.

First Banff 1993: The first Banff Classification was published in 1993,3 and defined that more than seven glomeruli with at least one artery and having seven slides: 3 Haematoxylin and Eosin (H&E), 3 Periodic acid-Schiff (PAS), and 1 Manson's trichrome. This was defined as adequate. 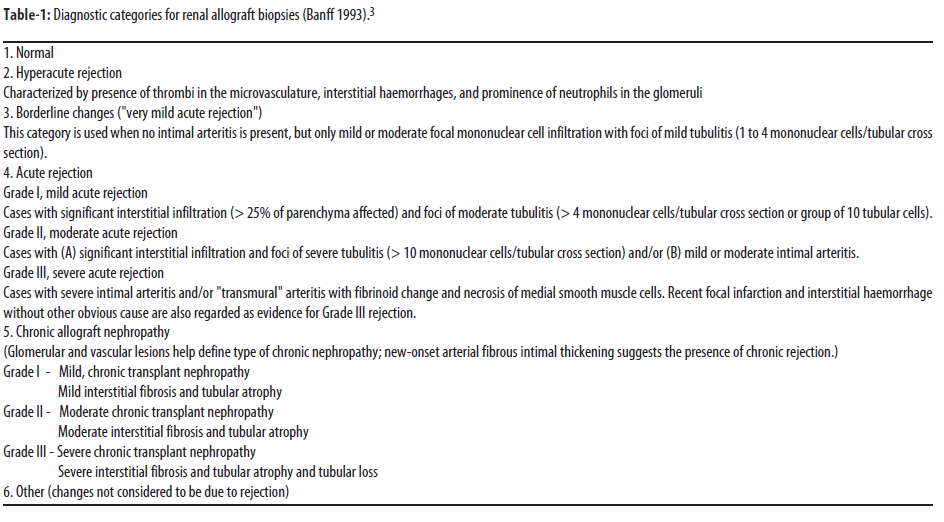 Also introduced was a numerical grading system for each of the renal compartments comprising interstitium (i), tubules (t), vessels (v) and glomeruli (g) as: 0=absent, 1=mild, 2=moderate and 3=severe (Table-2). 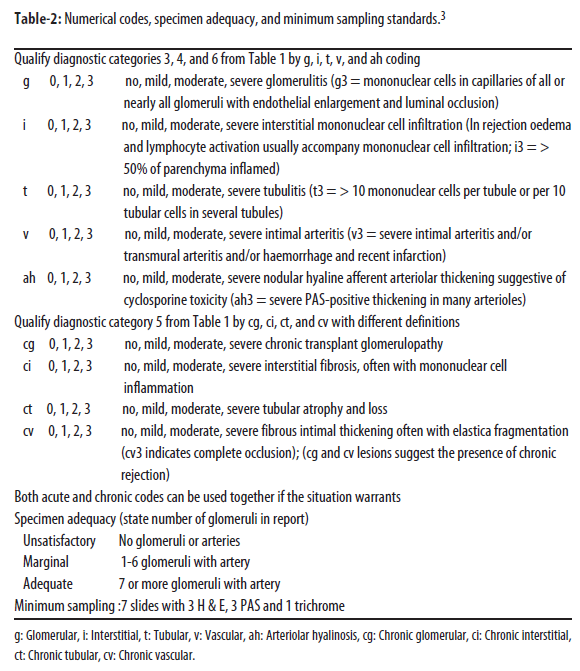 Banff 1997: In Banff '978 the significant change was that for the specimen to be adequate, it needed two cortical cores, sections thickness of 3-4µm, which had 10 or more glomeruli with at least two arteries bigger than arterioles.

Banff 2001: In 2003, the report of the Banff 2001 was published,9 in which the peritubular capillaries (ptc) staining with split C4 complement component (C4d) was accepted as the marker AMR and classification of AMR was established thus: Type (Grade) I: C4d+, Acute tubular necrosis (ATN) like with minimal inflammation; Type

Banff 2005: The report of the 8th Banff Conference, which took place in July 2005, was published in 2007.11   The major amendments were switch of classification as per its pathophysiological basis, namely antibody-mediated rejection (ABMR) and T-cell-mediated rejection (TCMR), either of which could be acute or chronic; instead of acute on chronic. This classification deleted CAN, and re-classified the following categories:

Acute ABMR occurs due to anti-donor antibodies and can occur on the operating table, or may take weeks to months. The microscopic features include ATN, presence of neutrophils in the ptc, thrombi and fibrinoid necrosis, along with C4d deposition.18

This is suggested if there is interstitial fibrosis and tubular atrophy associated with glomerular, capillary and arteriolar pathology with deposition of C4d in ptc and/or glomeruli, associated with the presence of donor-specific antibodies.19

(i) Acute TCMR: It occurs after 5-6 days, characterised by interstitial infiltrate of mononuclear cells with interstitial oedema, tubulitis, endarteritis, and rarely transplant glomerulitis.

(ii) Chronic active TCMR: It is characterised by arterial intimal fibrosis with mononuclear cell infiltration, and formation of neo-intima.

Category 5: CAN was replaced by the term Interstitial fibrosis and tubular atrophy.

In Banff '09, the only change from Banff '07 classification was that the presence of ATN which was described as indeterminate for 'C4d deposition without morphologic evidence of active rejection'.13   Banff 2011 added C4d-negative ABMR.14

Banff 2013 and 2015: The 12th Banff Conference took place in Comandatuba, Brazil, from August 19 to 23, 2013. The key result of the conference was describing the criteria for the diagnosis of C4d-negative ABMR and the modification of classification accordingly.15

Revised (Banff 2013) classification of ABMR in renal allografts were:

Acute/active ABMR: The three features that must be present for diagnosis are:

1. Histologic evidence of acute tissue injury, including one or more of the following:

- Acute thrombotic microangiopathy in the absence of any other cause.

- Acute tubular injury in the absence of any other apparent cause.

2. Evidence of current/recent antibody interaction with vascular endothelium, including at least one of the following:

- Linear C4d staining in ptc (C4d2 or C4d3 by interstitial fibrosis [IF] on frozen sections, or C4d>0 by immunohistochemistry [IHC] on paraffin sections).

- Increased expression of gene transcripts in the biopsy tissue indicative of endothelial injury if thoroughly validated.

Chronic, active ABMR: The three features that must be present for diagnosis are:

1. Morphological evidence of chronic tissue injury, including one or more of the following:

2. Evidence of current/recent antibody interaction with vascular endothelium, including at least one of the following:

- Increased expression of gene transcripts in the biopsy tissue indicative of endothelial injury if thoroughly validated.

3. Serological evidence of DSAs (HLA or other antigens).

C4d staining without evidence of rejection: The three features that all must be present for diagnosis are:

2. g = 0, ptc = 0, cg = 0 by light microscopy and by EM if available, v = 0; no thrombotic microangiopathy (TMA), no ptc basement membrane multi-layering, no acute tubular injury in the absence of any other apparent cause for this.

3. No acute cell-mediated rejection (Banff 97 type 1A or greater) or borderline changes.

Vancouver, Canada, hosted the 13th Banff meeting in 2015, which reviewed the clinical impact of updates of C4d-negative ABMR, thereby increasing the diagnostic accuracy of acute/active and chronic active ABMR in renal transplant biopsies.16

Banff 2017: The 2017 conference mainly concentrated on the clinical outcomes of inflammation in areas of interstitial fibrosis and tubular atrophy (i-IFTA) and its association with TCMR. It also focussed on the diagnosis of ABMR and the evolution of molecular diagnostics.17

Banff 2015 had for the first time described that the tubulointerstitial as well as the vascular compartment can show chronic active TCMR. It did not give any specific criteria that these tubulointerstitial changes would help in diagnosing chronic active TCMR. Inflammation involving more than a quarter of areas of cortex with IFTA, corresponding to Banff 2015 i-IFTA scores 2 and 3, were associated with high risk of graft loss.20-23 Therefore, in 2017, the conference revised the classification and added moderate i-IFTA plus moderate or severe tubulitis as diagnostic of chronic active TCMR, and it included the part played by augmented expression of gene transcripts/classifiers in the diagnosis of active ABMR.17

Banff 2019: The 15th conference was held from September 23 to 27, 2019, in the US, and refined the criteria for chronic active (CA) TCMR, borderline, and ABMR. Agreement of the diagnosis of borderline (suspicious) for acute TCMR was also achieved.5

Banff '19 for clarity recommends that tubulitis can be independently scored, excluding severely atrophic tubules, both in areas of preserved cortex (Banff t score) and within (Banff t-IFTA score) areas of cortical IFTA (Table-3). 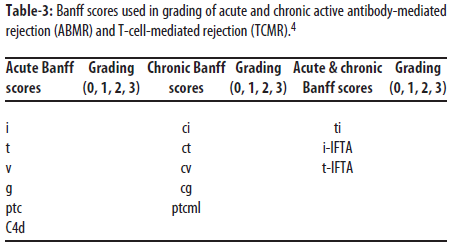 Longitudinal studies24 showed no effect of isolated t lesions on graft outcomes, consensus was also achieved for the diagnosis of borderline acute TCMR which read as follows: "interstitial inflammation involving 10%-25% of non-sclerotic cortex (Banff i1) with at least mild tubulitis (t>0)." The minimum lesion for a borderline diagnosis is thus i1t1.

The main drawback of this classification is that it sub-classifies ABMR into only active or CA and chronic inactive subtypes, but it did not demonstrate "the different morphological and molecular lesions at different post-transplant time points in antibody-mediated tissue injury".25,26

The majority favoured (chronic) active ABMR with (mild, moderate, severe) activity and (mild, moderate, severe) chronicity and included the Banff lesion scores in the text of the diagnostic line for the biopsy report or in a table. It was the choice of the pathologists whether they adopt these wordings, or they just write the Banff lesion score as specific (Table-4). Descriptions and ideal starting point for mild, moderate, and severe activity and chronicity still needed to be confirmed by more studies. 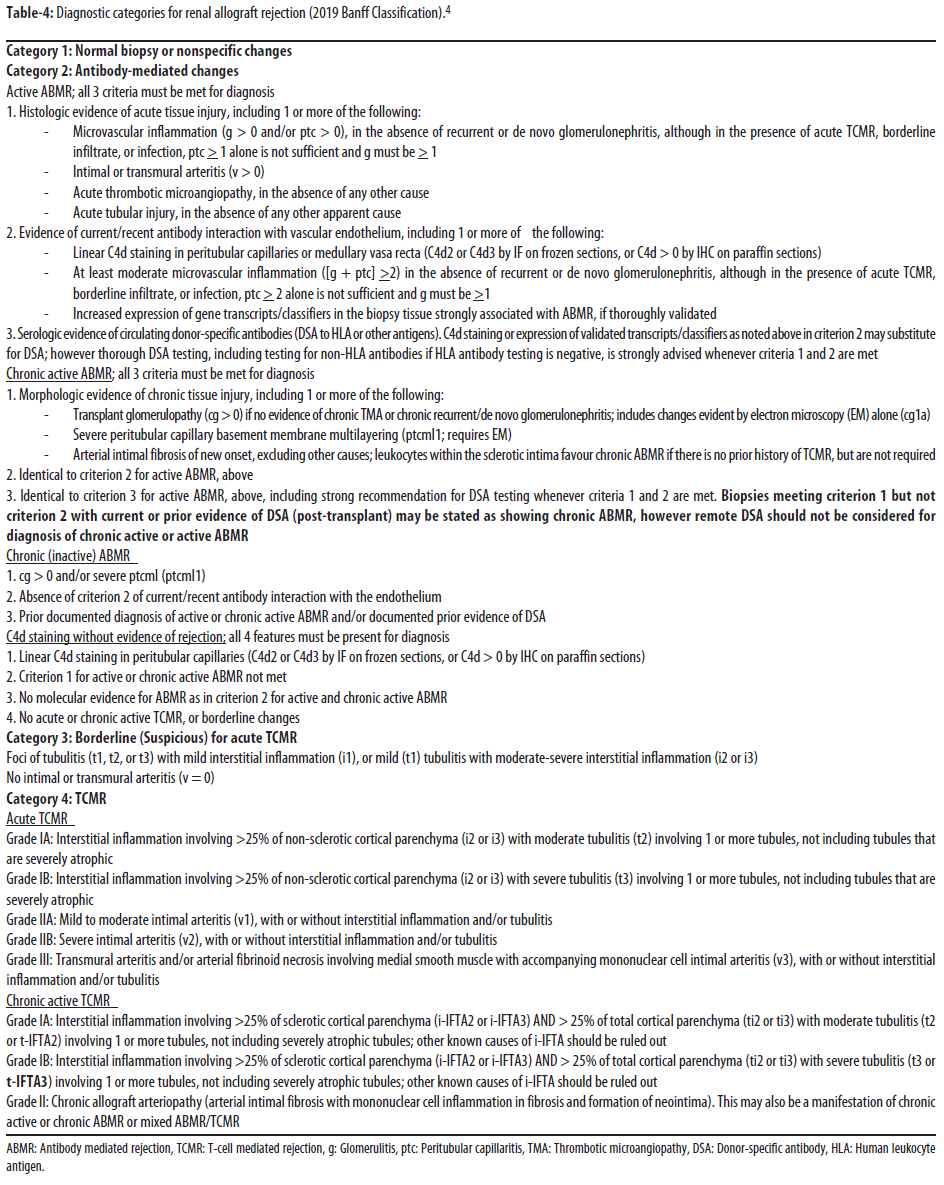 Future prospects: Although much has been done to improve the histological diagnose and to correlate it with clinical presentation,27  there are still limitations and may issues still remain to be studied, and there is a need to develop additional diagnostic tools, including molecular diagnostics.28,29  During the 2019 meeting, the discussion revolved not only around the future role of artificial intelligence (AI), machine learning (ML),30   as well as deep learning (DL)31-33 but it also included application in diagnosis and personalised medication in cases of organ transplantation. As these fields are very recent, they are not well understood by many clinicians and pathologists.

The 16th Banff meeting and the 30-year anniversary of the Banff Classification will be held where it all started' in Banff, Canada. It is now scheduled for September 19-23, 2022, and is likely to address these new themes using the ongoing Banff process of international consensus-building framework.

This perspective review concentrates on the work done in the last three decades on the standardized classification for renal allograft biopsy which began in Banff, Canada in 1991, with some hints to future prospects The Banff classification has undergone many reviews in light of new evidence and techniques and the next meeting will be held where it all started in Banff Canada in September 2022.

26. Haas M. The relationship between pathologic lesions of active and chronic antibody-mediated rejection in renal allografts. Am J Transplant. 2018; 18:2849-56.