Objective: To find out the common causes of hearing loss among young children, and to compare the causes along gender lines.

Method: The cross-sectional study was conducted from September 2020 to March 2021 at two government hospitals and one private clinic in Bahawalpur, Pakistan, and comprised children of either gender aged <8 years with complaint of decreased hearing. They were examined and tested for hearing impairment. Data was analysed using SPSS 22.

Conclusion: Otitis media with effusion was the commonest cause of hearing impairment, followed by consanguinity. Gender had no significant role to play in this regard.

Hearing impairment and hearing problems can impact an individual's everyday life. Due to hearing loss (HL), a person faces problems in speech perception and in hearing other environmental sounds. Hearing impairment can be conductive, sensorineural or mixed.1

HL is the fourth leading source of disability, and, according to the World Health Organisation (WHO), around 630 million people will be living with impaired hearing by 2030 if no action is taken, with that figure likely to rise to >900 million by 2050. South Asia, the Pacific region and sub-Saharan Africa are the world's leading debilitating HL areas.2

Perinatal HL occurs during birth and early life of neonate, and risk factors include lack of oxygen, birth before time, low birth weight (LBW), injuries during the birth process, jaundice, meningitis and sepsis. An acquired cause of sensorineural HL develops later in life and may be genetic or non-genetic. The acquired causes of sensory neural hearing loss (SNHL) are presbycusis, labyrinthine infections, trauma to inner ear or labyrinth, HL due to noise exposure, Meniere's disease, ototoxicity, sudden HL, acoustic neuroma, and some systematic disorders, like diabetes, hypothyroidism, kidney disease.3

Acquired reasons of conductive or temporary HL can be in the outer or middle ear. External ear causes can be any obstacle in external auditory canal, like boils, acute inflammatory swelling, benign or malignant tumour, ear canal atresia, wax and foreign body. A perforation of an infectious or traumatic tympanic membrane, a fluid in the middle ear that may be acute type of otitis media (OM), otitis media with effusion (OME) or severe OM are the reasons of HL in the middle ear. Mass in the middle ear is also a cause of HL. Mass can be malignant or benign tumour, causing disruption of ossicles, which may be ossicular chain trauma, cholesteatoma or chronic supportive otitis media (CSOM). The fixation of ossicles is also an acquired cause of conductive HL, like otosclerosis, tympanosclerosis or adhesive OM (AOM). Pharyngotympanic tube obstruction can also cause some conductive HL.4

Among the common HL causes in paediatric population, middle ear disorders which are inflammatory in nature, AOM and OME are more prevalent. In AOM, onset of signs and symptoms is rapid with active middle ear infection whereas in OME there is fluid in middle ear with no sign and symptom of acute middle ear infection. OME is more common in infants and younger children. According to a Dutch study, 80% children during their childhood undergo at least one occurrence of OME till the age of 4 when diagnosed in repeated tympanometric screenings.5

Cousin marriages are very common, especially in some regions of the world. When a disease, like HL, runs in a family, there is a great possibility that the next generation may get affected through hereditary transmission when parents happen to be cousins. Higher syndromic causes can be expected secondary to different consanguinity rates which is around 20% population of the world, particularly in the Middle East, northern Africa and western Asia.6

The current study was planned to find out the common HL causes among young children, and to compare the causes along gender lines.

The cross-sectional study was conducted from September 2020 to March 2021 at two government hospitals and one private clinic in Bahawalpur, Pakistan. After approval from the ethics review committee of the Department of Health Professional Technologies, Faculty of Allied Health Sciences, The University of Lahore, Lahore, Pakistan, the sample size was calculated using the formula.7

The sample was raised using non-probability convenience sampling technique was used from the Audiology Centre, Bahawalpur, the Bahawal Victoria Hospital (BVH), Bahawalpur, and the Civil Hospital Bahawalpur (CHB). Those included were male and female children aged up to 8 years having complaint of hearing problems either because of congenital or acquired causes. Those having functional HL were excluded.

Data was collected after permission from the respective administration of the three health facilities, and written informed consent from the parents of all the subjects. Demographic data was taken down on a predesigned proforma.

After clinical examination with otoscope, hearing evaluation tests were used for the assessment of middle ear status with tympanometry and hearing assessment with pure tone audiometry. 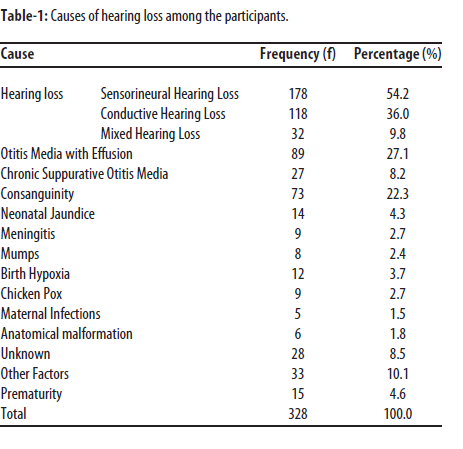 There was no significant difference between the male and female children in terms of HL causes (p>0.05) (Table-2).

Among the variety of middle ear disorders which are inflammatory in nature, OME 89(27.1%) was more prevalent in children in the current study and the finding is close to a range of 20-34% reported earlier.9

The second most common cause was consanguinity 73(22.3%) compared to 76.9% reported for patients having prelingual HL.10

Neonatal jaundice accounted for 4.3% in the current study compared to 6% and 4% reported earlier.12

The difference in terms of HL causes was not significant along gender lines, which was a finding in agreement with literature.17

In the light of the findings, frequent visits of children diagnosed with OM or CSOM to a consultant is recommended. Besides the level of awareness regarding HL prevalence due to consanguinity needs to be raised. Further studies are also needed to explore the unknown causes of HL.

The most common HL cause was found to be OME, followed by consanguinity and CSOM. The least common causes were maternal infections and anatomical abnormalities. The most prevalent HL type was sensorineural. There was no significant difference between the genders.

Disclaimer: The text is based on a Master's thesis.

7.      Statistics How To. [Online] [Cited 2020 July 2]. Available from: URL: https://www.statisticshowto.com/probability-and-statistics/find-critical-values/z-alpha2-za2/.