Frequency of median nerve tightness and its association with upper limb functions among smartphone users of a public sector university, Karachi

Method: The cross-sectional, observational study was conducted at the Institute of Physical Medicine and Rehabilitation, Dow University of Health Sciences, Karachi, from March 2020 to January 2021, and comprised subjects of either gender aged 20-40 years who had been using smartphone for >1 year. Body mass index was calculated. The participants were evaluated using upper extremity functional index-15. A hand-held dynamometer was used to assess handgrip strength, and a pinch meter assessed the pinch strength. Manual upper limb tension test 1 was used for median nerve tightness. Frequencies and percentages were drawn for all categorical variables. Data was analysed using SPSS 22.

Conclusion: Prolonged overuse of smartphone may lead to symptoms of median nerve tightness, but it was not found to have an effect on upper limb function, handgrip and pinch strength.

The excessive use of hand-held devices is one of the emerging causes of non-traumatic musculoskeletal pain.1   The prevalence rate of musculoskeletal disorder of the neck, upper extremity (UE) and the wrist has exceeded up to 76% due to excessive use of hand-held devices.2   In the modern world, smartphone is one of the hand-held devices, and has become the most essential component of one's daily life.3   Technology in the smartphone is getting advanced gradually. A vast range of its applications makes it common among teenage and middle-aged people.4   There are around >6 billion smartphone users all over the world.2   However, there are around 155 million cellular subscribers in operation and phone density is around 74.48% of the population in Pakistan with penetration rate of 30.21% of mobile phones.5   The frequent and prolonged use of the smartphones in an inappropriate posture is the main cause of UE musculoskeletal disorders (UEMDs).6   It can also lead to minor stress injuries, like enlargement of the median nerve and thickening of flexor pollicis longus tendon.7   Smartphone addiction positively correlates with repetitive joint overuse, leading to inflammatory changes in healthy joints.8   The symptoms include median nerve tightness / entrapment, numbness, and tingling sensation leading to carpal tunnel syndrome (CTS). It also causes hand and thumb pain with reduced handgrip strength, and upper limb functions at the workplace.9   The incidence of these symptoms is 3.8%, while the prevalence rate in females is 9.2% and in males it is 6%.10   A number of studies showed that handgrip strength was inversely related to functional impairments, all-cause mortality, physical disabilities, frailty status, nutritional status and cognitive impairments. Grip strength is directly associated with several factors, such as age, gender, body weight, height, bone mineral density (BMD), hand dominance, upper arm circumference, occupation, social lifestyle, physical and psychological status.11,12  A systemic review revealed that thumb performance had reduced in smartphone users when compared with low smartphone users.7

The cross-sectional, observational study was conducted at the Institute of Physical Medicine and Rehabilitation, Dow University of Health Sciences, Karachi, from March 2020 to January 2021. After approval from the institutional ethics review board, the sample size was estimated using OpenEpi version 613 on the basis of median nerve tightness prevalence 23.6%, confidence interval (CI) 95%, margin of error 5%, and power 80%.14   The sample was raised using non-probability purposive sampling technique from among physiotherapists, office workers, occupational therapists, speech therapists, orthotists, physiotherapy house officers as well as undergraduate and postgraduate students. Those included were subjects of either gender aged 20-40 years who had been using smartphone for >1 year and were willing to participate. Those having diagnosed UEMDs, any upper quadrant congenital deformity, like Erb's palsy, wry neck etc., any diagnosed neurological disorder, recent upper limb trauma, diagnosed cervical spondylosis/ cervical radiculopathy, history of inflammatory joint disease of UE, UE contracture / movement restriction, disability of upper limb, like wrist drop / post-polio syndrome etc., and those involved in handling vibratory mechanical devices in daily use were excluded.6

A Jamar hand dynamometer and pinch meter (Sammons Preston Rolyon, Bolingbrook, US) was used to assess the handgrip and pinch grip strength. The participant was in the sitting position with the shoulder adducted and neutrally rotated. The elbow was flexed at 90°, forearm and wrist were in neutral positioning, as recommended by the American Society of Hand Therapists.16   The participant squeezed the handle of the dynamometer as hard as possible and was asked to hold with maximum contraction, and then relax for 30 seconds, to control the fatigue effect.6   Pinch grip strength measurement involved palmar grip, lateral grip, pulp-to-pulp grip and three-pinch grip. The same position was followed three times on each dominant and non-dominant hand. Three readings were recorded and the mean reading was calculated to achieve the reliability of the test results.6   The average time taken in this assessment was 20 minutes per subject.

The ULTT1 was used to assess median nerve tightness. The participants were asked to lie supine and were given the instructions to report about the point at which they feel pain or discomfort during the assessment. The investigator depressed the shoulder of the participant with one hand to prevent accessory movement of scapula, then added 90° shoulder abduction, 90° shoulder external rotation, 90° elbow flexion, forearm supination, maximum extension of the wrist, fingers and abduction of the thumb.17   The test was recorded as 'positive' by using the criteria which consisted of three main points; reproduction of the individual's symptoms, a limited range of motion 10° or more in elbow extension, and contralateral neck-side bending aggravated the symptoms and ipsilateral neck-side bending decreased the symptoms. This assessment took approximately 1 minute per participant.16

Data was analysed using SPSS 22. All descriptive variables were presented as frequencies and percentages for categorical variables, and as mean and standard deviation for continuous variables. Pearson chi-square test was used to determine the association between categorical variables. Independent t-test and one-way analysis of variance (ANOVA) were used for comparing the mean values. P<0.05 was taken as significant. 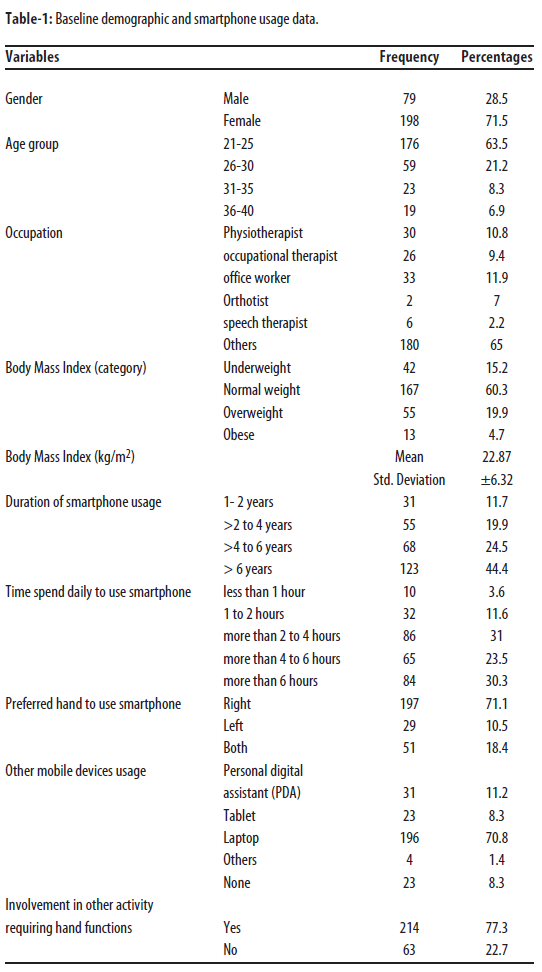 The current study showed higher frequency of median nerve compression symptoms among physiotherapists and the majority were females. A previous study also reported higher prevalence of CTS symptoms among working populations, and it affected females more than males.18

The present study reported that majority of the participants spent >6 hours daily to use a smartphone and had median nerve tightness. A previous study revealed that intensive use of smartphone seemed to have stiffer median nerves than non-intensive smartphone users, and that it would appear reasonable to conclude that their nerves had begun to undergo minor physiological changes, such as ischaemia and fibrosis, that would inhibit shape change15 Al Hazmi et al. found a significant association between hours of smartphone usage and smartphone addiction status. When the median nerve is exposed to repetitive overload, CTS may develop, and the median nerve enlarges.19   The present study showed that the positive cases of median nerve had highest score on UEFI-15, suggesting effects on UE hand functions. A previous study also reported that smartphone overuse was high-risk for developing CTS and affected UE hand functions.20

The present study found no significant difference between the means of smartphone usage dominant hand of both positive and negative median nerve tightness cases. In contrast, a study reported repetitive usage of smartphone decreased grip strength and hand function. It was revealed that hand dominance had no effect on any measured variable by itself. The study suggested that hand dominance affected both hand grip and hand-pinch strengths depending on the level of smartphone use.21   The current study suggested a significant relationship between median nerve tightness with those involved in other activities than using a smartphone, such as gardening, typing, writing, cooking and leisure activities. Woo et al. reported that repetitive wrist-flexion and extension and radial-ulnar deviation movements may have led to the enlarged and flattened median nerves among high-frequency smartphone users.22   It was supported by a study which stated that the when the activity of specific motor units continued during low-level muscle contraction, it resulted in a metabolic overload of motor units. The study also concluded that heavy usage of smartphone can affect hand functions.23

Present study suggested a relationship between median nerve tightness in the right hand with smartphone usage hand dominance among positive cases that showed more than half the subjects preferred the right hand for using a cell phone. Comparative analysis reported larger cross-sectional area of median nerve leading to CTS in the dominant hand among intensive smartphone users, which is consistent with previous studies.4,24

Also, the current study noted that most people used laptop other than using a smartphone and had been diagnosed with median nerve tightness. This observation followed studies showing that the frequency, duration, and years of experience using electronic devices cause the enlargement of the median nerve and other soft tissues, such as tendons, within the carpal tunnel.25   However, no study specified the frequency, duration and number of years of smartphone usage which affected the median nerve tightness, and UE function.

The current study has several limitations. First, it had no comparison group of intense and non-intense smartphone users, which has limited the generalisability of the results. The measurements of median nerve tightness, handgrips and pinch strength measurements may vary after a follow-up period and, thus, the result may differ accordingly.

Prolonged overuse of smartphone can lead to symptoms of median nerve tightness. However, it does not affect upper limb function, handgrip and pinch strength.