Necrotizing soft tissue infection is lethal and can lead to sepsis, multi-organ failure, and death. Here we describe a case, which reported to us within 24 hours of Caesarean section, with acute abdominal pain, tachycardia, and tachypnoea. Local examination revealed a large area of necrotic subcutaneous tissue involving a Caesarean section scar. Immediate debridement was carried out and repeated twice after the initial procedure but she could not survive.

Necrotizing soft tissue infections (NSTI) involving skin, superficial and subcutaneous tissue are lethal with high morbidity and mortality. They may affect the deeper layers of adipose tissue and muscle and result in systemic toxicity and death. Toxins producing bacteria are responsible for NSTI because of their rapid spread to underlying structures. The management consists of a multidisciplinary approach, early identification, fluid balance, broad-spectrum antibiotics, and wound debridement. The presence of risk factors like diabetes affects the prognosis of disease. The mortality rates are high even with optimal management.1

A 25-year-old primigravida was referred to Dr. Ruth K.M Pfau Civil Hospital Karachi on 23rd October 2020, 24 hours after Caesarean section at a private clinic, with complaints of abdominal pain, fever, and vomiting along with discolouration of skin above the Caesarean section incision. She was booked at a private hospital and had an uneventful antenatal period. At the onset of labour pains, she went to a local birth attendant, who gave her a trial of labour for 24 hours. The birth attendant then referred her to a private clinic, where she underwent a Caesarean section and delivered a stillbirth baby. The patient developed fever, abdominal pain, vomiting, and discolouration of the skin, above incision site, 24 hours after the procedure. She was referred by a private hospital to our hospital. At the time of admission, her vitals were 130/90 mm Hg, pulse 110 beats per minute, was afebrile and had a respiratory rate of 25 breaths per minute. Local examination revealed a necrotic area of around 20cm above the incision line extending up to the umbilicus, and a 10cm area of skin desquamation as shown in Figure-1. 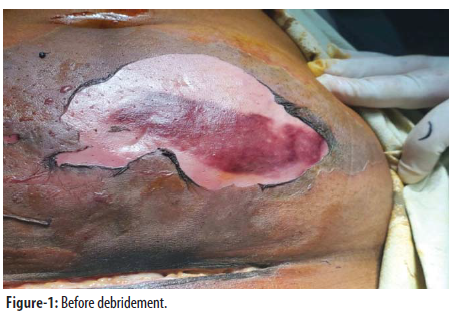 Palpation revealed crepitus underneath the subcutaneous tissue. Pelvic examination revealed foul-smelling lochia. Her laboratory investigations showed a total leukocyte count of 57,000, C reactive protein of 505, creatinine of 1.2mg/dl, HbA1c of 14. Her blood culture, urine culture, and high vaginal swab were also taken. Her q-SOFA (Quick sequential organ failure assessment) was two at the time of admission. She was given Tazobactam and Flagyl infusion.

A multidisciplinary approach was immediately introduced. She received fluid at the rate of 20ml/kg body weight. A provisional diagnosis of necrotizing fasciitis was made. The general surgeons were taken on board. On opening the abdominal cavity, there was collection of a mild amount of pus, which was taken for culture and sensitivity. Her Caesarean section scar was open. She underwent peritoneal lavage and debridement of the wound as shown in Figure-2 and was shifted to intensive care unit for further management. Her blood culture reports showed the presence of MRSA (methicillin-resistant staphylococcus aureus), whereas her peritoneal fluid showed the presence of Enterobacter species. According to culture and sensitivity reports, she was started on antibiotics and was changed over to Imipenem and clindamycin. Repeated wound debridement was undertaken and eventually re-laparotomy was done. The uterus scar was opened and was reclosed by interrupted sutures. She stayed in the intensive care for six days but expired due to septicaemia on the tenth postoperative day. Informed consent was taken from her husband and family members for publication in a medical Journal. 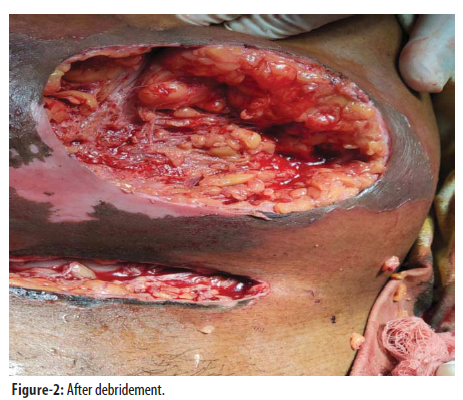 Necrotizing soft tissue infection was first described during the times of Hippocrates.2   It was later defined by British physicians and American surgeons, using different names for it.3  French surgeon Jean-Alfred Fournier in 1883 identified the infection in the perennial and scrotal region and gave it the name of Fournier's gangrene, a term still used commonly in surgical practice.

NSTI can affect any part of body, but are commonly observed in the perineum, genitalia and in extremities. It has also been reported after head and neck surgeries. Any breach in the skin and mucosal surface can result in infection of the subcutaneous tissue. In above patient, there was history of trial of labour at home by a birth attendant. Moreover, her diabetes mellitus was diagnosed only after investigations at our hospital.

NSTI is classified in several ways. It has been classified based on the tissues involved, microorganisms, clinical signs and symptoms, and on laboratory data as well. Several microorganisms have been identified in the etiology of NSTI. Usually, it is polymicrobial. The common organisms identified in the literature are Group A streptococci, Clostridium Perferingens, Enterobacter, aerobes, anaerobes, and Staph aureus. NSTI is also identified with community-acquired-methicillin-resistant staphylococcus aureus.5   A large series of 74 patients found MRSA in 39% of cases.6   The tissue material, sent for biopsy at the time of debridement, was positive for MRSA in our patient, whereas the peritoneal fluid showed the presence of E.coli.

The clinical features include redness, pain, erythema, gas under the subcutaneous tissue, along with systemic features of hypotension, increased respiratory rate, and shock. These features may not be present in all patients. The diagnosis of NSTI requires a high index of suspicion. Most surgeons see only a few cases in their lifetime and such cases are sparse in gynaecological practice. A literature search in Pubmed, identified only 16 cases of NSTI after Caesarean section. NSTI has been reported after an episiotomy wound too.7

The helpful diagnostic tools include laboratory variables, like total leukocyte count (TLC), C reactive protein (CRP), both of which were raised in our patient. The laboratory variables of haemoglobin, TLC, CRP, glucose, serum sodium, and creatinine are used to differentiate necrotizing from non-necrotizing tissue fasciitis.8   Plain radiography, which can show the presence of gas in subcutaneous tissue, ultrasound, computed tomography, and magnetic resonance imaging, all have been used to identify the extent of tissue involvement and presence or absence of abscess. The facilities of CT scan and MRI were not available in the emergency unit. Hence, based on clinical findings and laboratory reports, the diagnosis was ascertained.

A multidisciplinary approach is a requirement for the effective treatment of NSTI. Fluid balance and broad-spectrum antibiotics need to be started early in the management. Wound debridement is the cornerstone of treatment once the diagnosis is made. Antimicrobial therapy, including broad-spectrum antibiotics to combat group A Streptococcus, clostridium, should be started. In our patient, tazobactam, along with Flagyl was immediately introduced. Vancomycin is the recommended antibiotic for treating MRSA until proven otherwise. Repeated wound debridement under general anaesthesiais required to improve vascular supply to the affected area. It is recommended that initial debridement should include the indurated margins of the wound. A patient with NSTI undergoes wound debridement at least 3-4 times. Our patient was subjected to a second procedure within 48 hours, but she could not survive due to systemic infection and septicaemia. Her blood glucose levels were controlled with Insulin during her stay. Diabetes, anaemia, immunosuppression are recognized risk factors for NSTI. There is a role of hyperbaric oxygen (HBO) in wound care among diabetes mellitus patients with NSTI.9   Other options also include immunoglobulins. Wound care, skin grafting, and rehabilitation come later, once the patient survives the initial insult.

In the above case, maternal death can be attributed to diabetes mellitus. After the initial surgical procedure, the poor glycaemic control was identified and she was shifted to intensive care.

Necrotizing soft tissue infections are lethal. They require a high index of suspicion, immediate multidisciplinary approach with fluid support, wound debridement, and broad-spectrum antibiotics. Gynaecologists may not see it in their routine practice; hence knowledge about the infection is necessary. Also, women complaining about pain in the perineum after episiotomy wounds or unusual pain at abdominal wounds after Caesarean section should be carefully observed.

Conflict of Interest: There is no conflict of interest.

Funding Sources: None to declare.