Transposition of basilic vein for vascular access for haemodialysis: An experience of a tertiary care hospital

Basilic vein transposition (BVT) is the preferred permanent haemodialysis access due to better patency and lower infection rates compared to synthetic grafts. The outcomes of BVT cases, performed at Shifa International Hospital, Islamabad, from March 2006 to June 2018, were ambispectively investigated. The primary patency of the fistula was assessed immediately after surgery, at 24 hours, at 7-14 days, at 6-8 weeks and then at 3-6 months. A total of 160 patients were included in the study, out of which 83 (51.87%) were males while 77 (48.12%) were females. Of the total 160 patients, 119 (74.4%) underwent one stage BVT, while 41 (25.6%) underwent two stage BVT. One hundred and thirty-five (84.4%) procedures were successful and survived while in 25 (15.6%) cases it failed. Mean basilic vein diameter was 2.712±0.772 mm. Overall, 10(6.3%) patients had bleeding, 15(9.4%) fistulae thrombosed, 6(3.8%) had steal syndrome and only 1 (0.6%) patient developed pseudo aneurysm. We conclude that BVT is a feasible technique with very good patency rate especially for those patients who have multiple forearm AVF surgeries.

The number of patients requiring haemodialysis due to ESRD is steadily increasing globally. The definitive step in the management of patients on haemodialysis is the surgical creation of arterio-venous fistula (AVF).1  Over the years the Kidney Disease Outcome Quality Initiative (KDOQI) by the National Kidney Foundation has shown a significant impact on dialysis-related practice worldwide.2  KDOQI guidelines specifically recommend BVT.2  Despite this, BVT tends to be underused.3  The possible reasons for this could be that the procedure is technically more demanding than arteriovenous graft (AVG) as it requires complete vein dissection, making a proper subcutaneous tunnel with a very appropriate depth and finally placing the vein in the tunnel in a way that it does not get kinked at any point, particularly at the entry and exit points.4,5 Keeping in mind all these factors, the primary patency of BVT fistulae and frequency of different complications associated with the procedure were investigated in our study.

All patients presenting for permanent access for haemodialysis were first examined clinically for a suitable cephalic vein in both the arms, followed by vein mapping. The patients with an unsatisfactory cephalic vein, <2mm in diameter or thrombosed, were considered for BVT. The choice between one stage BVT (OSBVT) and two stage (TSBVT) was based on the surgeon's on-table assessment of vein diameter and wall thickness. Poorer veins were reserved for the TSBVT procedure, whereas better veins were used for OSBVT. The OSBVT means to create a fistula between the basilic vein and the brachial artery in upper arm in one procedure. It requires a long incision to mobilise basilic vein making sure the anastomosis is not placed under tension. The main advantage of the OSBVT technique is the shorter waiting time to cannulate the fistula along with surgery in one go and cost effectiveness in terms of single hospitalization. The main disadvantages of this technique is the longer incision requiring a longer duration to heal and an increased risk for wound-related complications. Moreover, it is more technically demanding. Whereas, TSBVT technique requires hospitalization twice, it allows the basilic vein to become arterialised in first step and there is minimal chance of twisting of vein. In the second stage vein is easier to mobilise as it gets transformed into a bigger and stronger structure, with the aim of better patency rates.[6 Institutional Review Board (IRB) approval was obtained before the commencement of the study with IRB no.195-044-2012. From March 2006 to June 2018, all patients undergoing BVT were ambispectively reviewed and included in the study conducted at the Shifa International Hospital, Islamabad. Written informed consent was obtained with particular mention of possible poor outcome in case of small calibre veins. The non-dominant hand was the preferred side, whenever possible. All the patients received preoperative prophylactic antibiotics (Cefazolin/Cephradine/Co-Amoxiclavulinic) with variations based on allergy profile and past antibiotic exposure. All the patients were started on aspirin 75mg daily for life from the operation day and all procedures were performed under general anaesthesia. For all fistulae, primary and functional patency were assessed on the first post-operative day, during follow-up at the surgery clinic, followed by review at the dialysis clinic and then followed-up via telephone calls for those receiving haemodialysis from other centres. Primary patency was defined as a palpable thrill and audible bruit on first post-op day and then on follow-up in the OPD at 1-2 weeks and 6-8 weeks. Functional cumulative patency was recorded as duration of time from mature fistula to AV access abandonment. Mean follow up was six months. The primary outcome measure was primary patency rates. Secondary outcome measures included association of patency with basilic vein diameter, age, gender, and complications (bleeding from fistula, infection, steal syndrome, thrombosis, pseudoaneurysm and oedema were noted). A total of 1,000 patients underwent AVF formation by the primary author of this study from March 2006 to June 2018. Of these, 160 (16%) patients underwent BVT. Majority i.e. 119 (74.4%) had OSBVT, while the remaining 41 (25. 6%) underwent TSBVT. The patients were between the age 14 and 90, with the mean age being 57.46 (± 14.389) years. Eighty-three (51.9%) patients were males, while 77 (48.1%) were females. One hundred and thirty-eight (86.3%) procedures were carried out on the left arm, while 22 (13.8%) were done on the right arm. Mean basilic vein diameter was 2.712±0.772 mm. Mean vein diameters for OSBVT was 2.746±0.781 and for TSBVT was 2.582±0.732. Majority of the patients i.e. 155 (96.875%) had ESRD secondary to diabetes and hypertension, while 5 (3.125%) had primary renal pathology. The overall primary patency success rate was 84.4% (n=135) while the remaining 25(15.6 %) were failures. Primary patency rate was in 100(74%) for OSBVT and 35(25.9 %) for TSBVT. Surgical complications noted in the BVT patients are shown in Table-1. The functional patency of the fistulae can be seen in Figure. This survival curve shows maximum survival of fistulae at six months and then suddenly there is a constant drop in the curve as many of the patients were lost to follow-up. No patient was censored as no death occurred because of the procedure itself (0 %). The association of BVT cases maturity with vein diameters was insignificant (p=0.630). The maturity of BVT fistulae in relation to the patient's age, gender, side of fistula, type of fistula and diameter of basilica veins are summarised in Table-2. The functional cumulative patency of all the fistulae could not be calculated as many patients were attending other centres for haemodialysis. Furthermore, telephonic records were missing because of change of numbers. 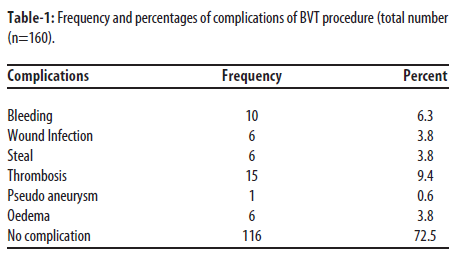 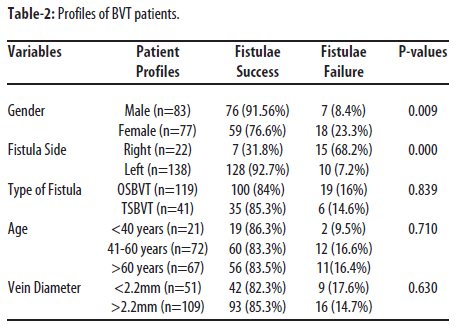 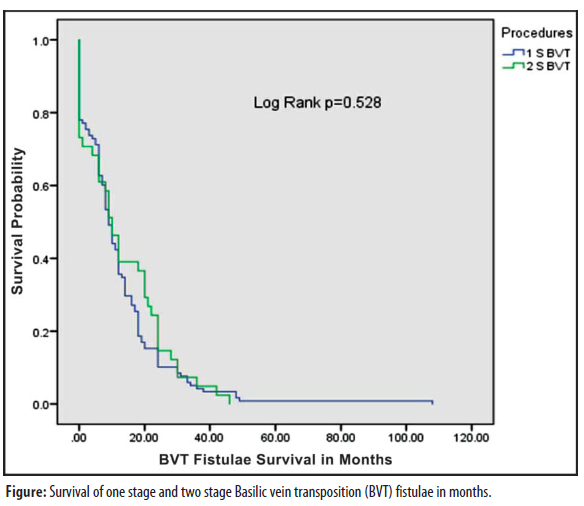 In patients undergoing vascular access for haemodialysis, the challenge comes when a suitable vein is not available. While KDOQI recognises BVT as the next best option after primary vascular access,2 following the publication of KDOQI guidelines, there has been an increase interest in exhausting all autologous vein options before resorting to AVG.7 AVG comes with greater infection risk, thrombosis, more cost, need for creation of two anastomoses graft-artery and graft-vein and require greater skill for puncturing the synthetic graft.4 All these factors reinforce the importance of BVT procedure. In the current study, Basilic vein diameter cut off for TSBVT was lower than most centres (2.7mm vs. 3.6mm) with acceptable success rates of 84%.5,8 The majority of our patients are underprivileged and paying out of their pockets. Moreover, in many cases, the patients could not afford the price of a synthetic graft due to which the smallest possible Basilic vein size suitable for BVT had to be explored. This was the main reason for attempting BVT in relatively thin calibre vessels as compared to others. We report acceptable, comparable success rates even with smaller calibre veins (84%) with those reported in the literature at six months.5,9 One reason for the satisfactory outcomes could be the consistent use of low dose aspirin and preoperative prophylactic antibiotic coverage. Furthermore, given that this data represents all patients who ever received a BVT at the Shifa International Hospital, Islamabad, suggests that south Asian patients with an unsuitable cephalic vein for primary AVF also have smaller Basilic veins than other ethnicities (2.7mm vs. 3.6mm).8,9 Another reason for this could be that patients generally come late for the formation of AVF with deteriorated vein because of repeated punctures. Skip incisions were used which led to fewer wound related complications — 3.8% in the current study as compared to 4.91%, 12% and 14 % in others.7,10,11

The functional cumulative patency could not be measured as majority of the patients (80%) had come from different cities only for the procedure because of the non-availability of vascular access surgeons in their areas. So, after the initial follow up, they were consulting other centres for haemodialysis and fistulae closure later on. That is why, Figure-1 shows maximum patency at six months and then the curve gradually falls because of lack of follow-up of the patients. The second limitation of this study is that we could not analyse all the factors of fistulae maturation. It is recommended that further studies be conducted that include all the factors responsible for fistula maturation and with longer follow-up time.

It is concluded that basilic vein transposition is a very good technique with extremely good short-term patency rates even with smaller calibre veins and the patients should be offered autogenous veins over grafts.

Conflict of Interest: Authors claim no conflict of interest.

Funding Source: This research received no specific grant from any funding agency in the public, commercial, or not-for-profit sectors.

Comparison of effectiveness between Haloperidol and Quetiapine in acute manic episode