Objectives: To identify the local patterns of manifestations, organ involvement other than lungs, diagnostic tools and treatment regimens related to patients of sarcoidosis.

Method: The retrospective study was conducted from November 1, 2019, to February 28, 2020, at the Aga Khan University Hospital, Karachi, and comprised data of sarcoidosis patients who needed hospitalisation between 2009 and 2019. The entire clinical spectrum was noted based on organ involvement. Data was analysed using SPSS 21.

Results: Of the 80 patients, 53(66.3%) were women. The overall mean age at diagnosis was 52.0±13.5 years. Pulmonary sarcoidosis was found in 60(75%) patients, while 13(16.3%) had extrapulmonary manifestations, and 6(8.8%) had both pulmonary and extrapulmonary involvement. None of the patients had hypercalcaemia, while antinuclear antibodies were positive in 2 (18.2%) patients. In terms of treatment, 75(93.8%) patients received corticosteroids. Acute exacerbation of interstitial lung disease was the most common reason of hospitalisation 16(20%). Mortality was the outcome in 11(14.7%) cases.

Conclusion: Sarcoidosis was found to be more prevalent in women aged 50 years and above. A quarter of patients had extrapulmonary manifestation, while interstitial lung disease was the most common complication.

Sarcoidosis is a multisystem granulomatous disease of variable clinical course, and there is no universally accepted treatment algorithm.1  The diagnosis of sarcoidosis is not standardised, and is currently based on three major criteria: a compatible clinical presentation, finding non-necrotising granulomatous inflammation in one or more tissue samples, and the exclusion of alternative causes of granulomatous disease.2  The clinical presentation and severity of the disease differ among ethnic and racial groups. Extrathoracic manifestations are more common in some groups, and clusters of the disease have been reported leading to speculation about person-to-person transmission or a shared exposure to an environmental agent. There have been case reports of familial clustering of sarcoidosis as well as husband-wife transmission.3  The annual incidence of sarcoidosis among adults varies considerably across ethnic groups. The highest incidence is observed among African-Americans at 17.8 per 100,000 population, followed by whites 8.1 per 100,000 population, while the lowest annual incidence is reported among Asians and Hispanics at 3.2 and 4.3 per 100,000 population, respectively.4

A case series from Pakistan reported a prevalence of 43% amongst a population with isolated mediastinal lymphadenopathy.5  Cutaneous sarcoidosis, usually presenting as sarcoid plaques, is variable and is often confused with manifestations associated with tuberculosis (TB).6  There have been rare cases where presumed TB patients were later identified as suffering from sarcoidosis and had improvement in symptoms with steroid therapy.7  Furthermore, a study in Pakistan portrayed cough and shortness of breath as the main symptoms of sarcoidosis, which overlap with the symptoms of TB.7  Making a diagnosis of sarcoidosis is a  challenge for physicians in countries where TB is endemic. However, it is pertinent to keep it in the list of differentials. The current study was planned to analyse the presentation, characteristics, and outcome of patients admitted with sarcoidosis.

The retrospective study was conducted from November 1, 2019, to February 28, 2020, at the Aga Khan University Hospital (AKUH), Karachi, and comprised data of sarcoidosis patients who needed hospitalisation between 2009 and 2019. After approval from the institutional ethics review committee, data of inpatients was reviewed using code International Classification of Diseases-9-Clinical Modification 135 (ICD-9-CM 135) to identify patients who were labelled as having sarcoidosis. Demographics, age at disease onset, clinical features, blood and imaging results, histopathological findings of any biopsies and cultures, if done to rule out alternative TB diagnosis or fungal infections, were collected by reviewing clinical charts.

Moreover, co-morbid conditions, time of follow-up, use of corticosteroid and/or immunosuppression treatment, and the outcomes of specific organ disease were also recorded. Patients were divided into two groups; those with pulmonary disease features, and those with extrapulmonary manifestations only. The latter was further divided into two subgroups; patients having single-organ disease and those with multi-organ involvement. Limits for laboratory values at the time of diagnosis were defined. Liver function tests (LFTs) were considered elevated if they were 1.5 times above the upper limit of normal. The normal range of serum calcium was defined as 8.6-10.5mg/dl and hypercalcaemia was defined as corrected calcium >10.5mg/dl. The normal range of serum angiotensin converting enzyme (ACE) was 8-52 nmol/ml/min, parathyroid hormone (PTH) 10-55pg/ml, creatinine 0.65+-1.1, and serum albumin 32-50g/L. Besides, antinuclear antibodies (ANAs) were also recorded. Radiological findings of chest X-ray (CXR) were defined using the Siltzbach classification system.8 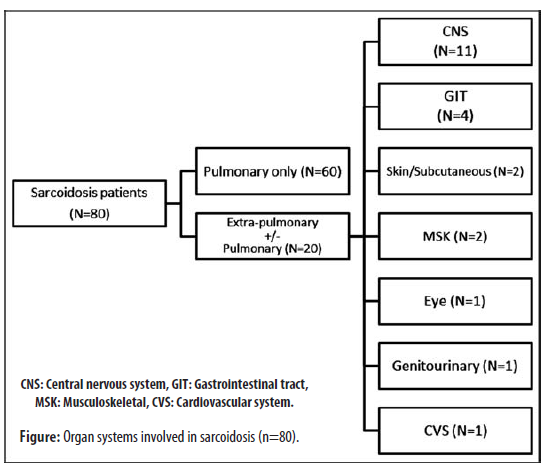 The most common co-morbid condition was hypertension (HTN) 51(63.8%) patients, followed by diabetes 37(46.3%). Bilateral hilar lymphadenopathy was seen in 29.3% patients on CXR. Interstitial lung disease (ILD) was the most common manifestation of pulmonary involvement 16(20.0%) patients, followed by pneumonia 8(10%). Besides, 5(7.5%) patients presented with acute respiratory distress syndrome (ARDS) and 6(7.5%) with transient ischaemic attack (TIA)/stroke (Table-2).

In terms of treatment, 75(93.8%) patients received corticosteroids, and treatment compliance was high 68(95.6%) patients. Treatment-related side effects were also noted (Table-4).

Sarcoidosis is a multisystem disease that often presents insidiously, with no single laboratory test to establish the diagnosis. According to the ACCESS study,9  the presentation of sarcoidosis may be affected by gender, race and age. In the current study, the mean age at diagnosis was 52.0±13.5 years which was slightly higher than that reported in Caucasian and Chinese populations.10  The female preponderance noted in the current study was in line with an earlier study done in Pakistan.5  However, compared to the earlier study,5 the current study had a larger sample size and the analysis of extrapulmonary manifestations was much more in depth.

The main laboratory and radiological findings in literature11,13 were hypercalcaemia, raised liver function test (LFT) values and serum ACE levels with bilateral hilar lymphadenopathy on CXR. A study noted a similar pattern with certain exceptions. LFT values, such as aspartate transaminase (AST), alanine transaminase (ALT) and gamma-glutamyl transferase (GGT), where 24% of sarcoidosis patients had deranged LFTs, with 57% having elevated 1-2 LFT values.14  However, previous data showed variation within LFTs and the current data is consistent with existing literature, like, for example, a study showed that serum ALT was elevated in 3/61 cases, while AST was only elevated in 1/267 cases15  and this was similar to the current AST and ALT results. While the above study14 had at least two components of LFTs elevated, the current analysis found an isolated increase in GGT levels only, which was consistent with some earlier findings.16  Because high levels do not correlate with the severity of the disease, serum GGT is not regarded as a specific marker for diagnosis of sarcoidosis. Furthermore, it was concluded in another research that elevated bilirubin levels are not a common laboratory finding in sarcoidosis,13  which was similar to the current findings.

Hypercalcaemia was present in 8-10% patients17  where increased calcium excretion in the urine was the most common manifestation of altered calcium homeostasis (40-62%).18 The overall mean serum calcium level in the current study was not elevated. On the other hand, those with both pulmonary and extrapulmonary organ involvement had a comparatively higher mean calcium levels.

The mean serum albumin level in a prior study was 40.16±4.02g/L for the group with pulmonary sarcoidosis and 40.81±3.86g/L for those with extrapulmonary and pulmonary disease.19  Higher albumin levels were observed in the latter group in the current study as well. Granulomas have a high prevalence in sarcoidosis and are an important diagnostic marker. It was observed in 69.6% of patients in the current study. Sarcoid granulomas were seen in lymph nodes, especially intrathoracic, lungs, liver, spleen and skin.5

Kidney involvement in pulmonary sarcoidosis has been reported to range 3-48%.21 A study defined elevated creatinine levels as >1.4mg/dl, where 8% patients had serum creatinine higher than the cut-off.21  In the current study, mean creatinine level was 1.33±1.3 mg/dl (normal range: 0.65-1.1mg/dl) and acute kidney injury was noted in 5% patients.

Serum ANA levels were detected in 28.5% patients with sarcoidosis in one study, while 29.4% in the other.22  This test was positive in 18.2% cases in the current study.

Increased morbidity and mortality is encountered in advanced lung disease as approximately 20% develop progression and may die from sarcoidosis-associated pulmonary hypertension (SAPH).23  In contrast, the current study had 3(3.8%) patients who developed pulmonary hypertension. Pulmonary sarcoidosis often has severe complications, such as rare sequelae of pneumothorax (2.5%).22  None of the cases in the current study had pneumothorax. Besides, haemoptysis developed in a few patients due to bronchiectasis and its associated changes in the pulmonary system. Bronchiectasis as a consequence was observed in 24.5% cases in another study also.24  In the current study, only 2(2.5%) patients developed bronchiectasis.

Based on the standard of care, manifestations of the disease, extrapulmonary involvement, gender and ethnicity, the mortality rate of sarcoidosis approximated to 9.26  per 1000 person-years according to a study done in South Korea.25  The age- and gender-adjusted mortality per 100,000 in the United States, the United Kingdom/France and Japan populations have been reported to be 4.32, 3.6-4.2 and 0.1-0.2, respectively.23  The mortality in the current study was 14.7%, with a higher percentage among those with pulmonary sarcoidosis. The differences between these different populations is due to genetic and racial determinants.

The treatment regimen involving steroids has its own adverse effects. The current study also looked into the cumulative side effects of all the medications used for sarcoidosis, and 12(21.4%) patients reported having experienced side effects due to medications. A study reported that 24% patients experienced an increase in their weight, 8% developed diabetes, 1% developed cataracts, 1% had worsening of pre-existing psychotic symptoms, 2% had aseptic necrosis of the femoral head, and 2% had gastrointestinal haemorrhage.27  The current study had 3.8% patients with respiratory complaints, 2.5% with eye complications, 2.5% endocrine dysfunction, 5% gastrointestinal sequelae, 1.3% central neurological complaints, and 1.3% had peripheral neurological complaints.

The current study has several limitations. It was entirely descriptive and retrospective, and focussed only on ICD-9-CM 135-labelled cases of sarcoidosis, and histopathology was not available for all the cases. Patients who were highly likely to have sarcoidosis, and no other justifiable aetiology for the presentation, were included. Although the accuracy of the diagnosis is one of the issues of concern, all the patients with sarcoidosis had been diagnosed by specialists in their respective fields, including rheumatologists, pulmonologists, dermatologists, and ophthalmologists. Lastly, the sample size was small. Together, the limitations mean the findings are not generalisable.

A large number of sarcoidosis patients continue to be managed as those of TB and vice versa without any benefit, and continue to suffer before the initiation of specific treatment for their disease. This is more common in developing and high TB-prevalent countries. Recognition of local patterns of sarcoidosis is of paramount importance to effectively treat a patient with either TB or sarcoidosis without the fear of complications.

16.    Poole A, Myllyla R, Davies BH. Activities of enzymes of collagen biosynthesis and levels of type III procollagen peptide in the serum of patients with sarcoidosis. Life Sci. 1989; 45:319-26.