Schwannoma, also called neurilemomma is a benign neoplasm. It originates from Schwann cells which are involved in myelination of peripheral nerves and commonly occur in the soft tissues of the head and neck. Intraosseous schwannoma is rare and accounts for only 0.2% of overall primary bone tumours. Merely 200 cases have been reported in the literature. Intraosseous schwannoma of long bones is even rarer, amounting for only 20 cases reported. We present a case of intraosseous Schwannoma in the distal shaft of the fibula, in an 18-year-old female patient who presented with pain in the right leg for 2 years. MRI showed a lytic lesion, with a differential diagnosis of aneurysmal bone cyst. The tumour was excised and on histopathological examination, a diagnosis of intraosseous schwannoma was made.

Schwannoma also called neurilemomma is a benign neoplasm. It arises from Schwann cells of nerves. They comprise 1-10 % of all soft tissue tumours1 and usually arise from peripheral nerves of the head and neck.2 Intraosseous schwannoma is rare and causes only 0.2% of overall primary bone tumours. In literature, less than 200 cases have been reported.3 The most common sites are mandible, vertebrae, sacrum, and maxilla but the involvement of long bones is rare. Only 20 cases have been reported in long bones such as humerus, tibia, fibula, ulna, and radius.4

An 18-year-old female patient presented with a history of pain in the right leg for 2 years. On physical examination, localized tenderness was present at the lateral aspect of the right distal leg. Past medical and surgical history was insignificant. On examination, there was no limitation in range of motion or neurovascular deficit. Baseline blood workup including complete blood count, urea, creatinine, and electrolytes were within normal limits. X-ray leg anteroposterior and lateral view (Figure-1a & b) showed an intramedullary osteolytic lesion with multiple septae involving the distal shaft of fibula. 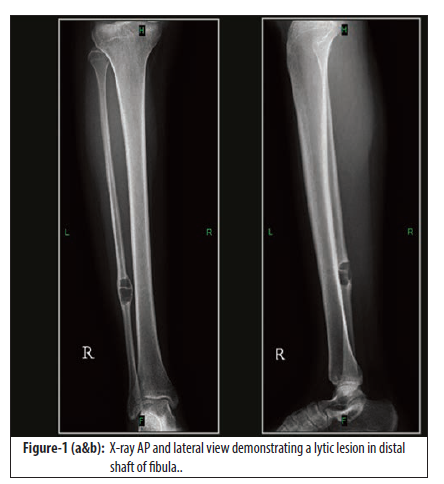 A needle biopsy was initially done which showed a spindle cell lesion. Immunohistochemistry was performed which showed S-100 positivity in spindle cells favouring neural differentiation. The tumour was then excised with wide margins. The specimen was received in the Histopathology Department at The Indus Hospital, Karachi on January 27, 2020. The excised segment of bone measured 5.0 x 1.5x1.0 cm. Focally attached soft tissue component measured 1.5x1.0x0.7 cm. The outer surface of the bone was smooth. On sectioning, a tan white firm lesion was identified in the bone measuring 1.5x1.4 x1.0 cm. No cystic or haemorrhagic areas were identified. The surrounding soft tissue also showed focal grey-white areas. On gross inspection, the lesion did not involve the resection margins. Microscopic examination (Figure-2 a & b) showed cross-section of bone exhibiting bone trabeculae at the periphery with the central area showing cellular neoplastic lesion exhibiting hyper and hypocellular areas. This cellular area showed spindle-shaped cells exhibiting palisading arrangement of the nuclei forming verocay bodies. The nuclei were elongated and showed inconspicuous nucleoli. Other areas showed scattered thickened blood vessels with few cystic spaces. Cellular nodules in the peripheral soft tissue were seen which were extending into the central area of bone. At the periphery, skeletal muscle fibers were also noted. No evidence of nuclear pleomorphism, increased mitosis, or necrosis was seen. Both resection margins showed mature bony trabeculae with intertrabecular fatty marrow. Immunohistochemical stain S-100 was positive in neoplastic cells (Figure-3). ASMA, Desmin, and CD34 were negative in neoplastic cells. Based on morphological and immunohistochemical features, a diagnosis of intraosseous schwannoma was made. Postoperatively, patient remained stable and was discharged on second postoperative day. On follow-up after 2 weeks, wound was healthy and patient was symptom free. No follow-up was available thereafter. A written consent was obtained for reporting this case. 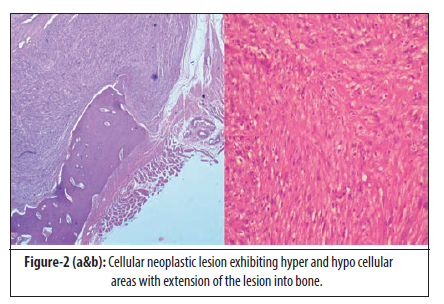 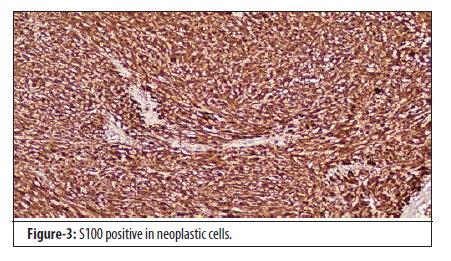 Schwannomas are slow-growing lesions that arise from myelinating Schwann cells. Its incidence is about 1 in 40,000 individuals and usually presents between 10 to 50 years of age.5 Females are slightly more affected than males.6 Most cases are sporadic but a small number of cases can be associated with Neurofibromatosis type 2. Schwannoma arising from bone is uncommon and accounts for only 0.2 percent of overall primary bone tumours.6 Only about 200 cases of intraosseous schwannoma have been reported previously and mostly involve mandible, maxilla, sacrum, and vertebrae. Schwanomma of the long bones is particularly rare and only 20 cases have been reported in long bones such as humerus, tibia, fibula, ulna, and radius.4 We found only 3 case reports in literature on schwanomma occurring in fibula.2,5,7Its rarity in bone is attributed to deficiency of sensory nerve fibres in bone. The most common sites for schwannoma of long bones include junction of diaphysis and metaphysis and intramedullary or nutrient canal.2

The possible mechanisms by which neurilemmomas can involve bone include the following: the lesion can arise from the nerve passing through a canal in a bone leading to bone erosion; lesion can arise from outside the bone and can erode bone, or it may arise directly within the bone (intramedullary).3 In our case, the lesion involved diaphysis of the bone. The tumour nodules were seen in the peripheral soft tissue with extension into bone thus raising the possibility that tumour probably originated in soft tissue with extension into the bone.

Most intraosseous schwannomas are often asymptomatic but may present with periodic swelling and slow onset pain.6 The radiographic appearance of schwannoma is that of a benign cyst-like defect that is present centrally within the long bone surrounded by a thin rim of sclerosis. The differentials include aneurysmal bone cyst, simple bone cyst, enchondroma, benign fibrous histiocytoma, non-ossifying fibroma, desmoplastic fibroma, chondromyxoid fibroma, and fibrous dysplasia.5

Since intraosseous schwannoma is rare and has nonspecific findings on radiology, it is usually not included in the initial differential diagnosis. The histopathological examination of lesion is the key to the diagnosis of schwannoma.

The current case shows that the initial impression on radiology was an aneurysmal bone cyst; however initial biopsy showed a spindle cell neoplasm.  Intraosseous schwannoma of fibula is rare with only 3 cases previously reported in literature. This case highlights the fact that although intraosseous schwannoma is rare, it should be considered as a differential in patients presenting with painful lesion arising in the long bones that appear benign on the radiology.

Consent: Consent for publication of the case, was obtained from the patient.

The journey from drug addiction to drug recovery; a case report of an inpatient rehabilitation

Drug-induced duodenal perforation in the paediatric patient with thalassemia major, an unreported side effect of iron- chelating agent: A case report

A rare double-delta sign in a bucket handle tear of lateral meniscus: A case report