Objective: To determine the effects of cognition improvement strategies on academic performance, stress and sleep quality of medical students.

Method: The cross-sectional study was conducted at the Dow University of Health Sciences, Karachi, from March 2019 to March 2020, and comprised medical students regardless of gender and academic year. Academic performance was assessed through grade point average, while stress and sleep were assessed using the Perceived Stress Scale and Pittsburgh Sleep Quality Index. Data was analysed using SPSS 25.

Conclusion: Majority of the students were found to be consuming cognitive enhancers, but no significant association of the stimulants was found with either academic performance or stress.

As per the Diagnostic and Statistical Manual of Mental Disorders-5 (DSM-5),2  caffeine, one of the commonly used cognitive stimulants, can cause physical, mental and psychomotor impairments upon its withdrawal. The use of certain smart drugs commonly prescribed, like methylphenidate and modafinil,3  narcotics, like cocaine and amphetamine, and soft enhancers, like phyto drugs, soft drinks, vitamins, tonics,4  tobacco,1  coffee and caffeine pills, is practiced for cognitive enhancement. According to a research conducted in Pakistan, about one-fifth of students admitted to the use of psychoactive substances.5  Caffeine and nicotine, two major substances, are the most common psychostimulant drugs used worldwide.6  A recent study in a public-sector medical university found that caffeine was consumed by 95% students.7  Some studies demonstrated that smoking was the preferred method of nicotine use for (78.9%)8 and (26.3%)9  students. The effects of caffeine are largely dose-related. A study revealed that at low doses, caffeine promotes wakefulness, confidence and vigour, while at high doses an individual portrays the characteristics of an addict, like having increased sense of power, which may lead to a euphoretic state.10

Studies showed that the common reasons behind cognitive stimulant consumption were to feel more alert, to wake up in the morning, to combat headaches, to ameliorate the mood, to concentrate while studying, and to deal with stress and depression.11,12 Evidence suggests that the use of stimulants and high-caffeinated products increases with class seniority and male gender.13  Also, perceived stress was found to be higher in medical students of higher age group.14

As can be imagined, the constituents of cognitive stimulants have a negative effect on sleep in one way or the other. This was supported by a study showing poor sleep had significant relation with smoking and caffeine consumption.15

It has been seen that the cognitive enhancers were being used more by those students who were going through stressful periods or were under any sort of academic pressure or those with psychiatric disorders.4 Another study found that the quality of sleep was inversely related to, while caffeine consumption was directly related to, stressful periods. Nicotine consumption, however, did not vary with any of these factors.16

The high academic load of medical students makes them stressed. A study showed daily caffeine intake had a significant relationship with academic-related stressors.17  The increase in consumption of cognitive enhancers was also noted in the pre-exam period.18  To overcome these high stress levels, students make high use of cognitive enhancers. A study showed that academic stress in university students correlated inversely with the number of days left in the exams, compelling them to consume alcohol, caffeine and nicotine which ultimately compromised their sleep quality.16

As determined by the DSM-5, the potential of caffeine to cause addiction has proved that seemingly harmless caffeinated substances, like tea, coffee and energy drinks, can also be a cause of addiction and, ultimately, lead to withdrawal symptoms.2  Influenced by peers, it has become a trend among the students to consume enhancers for improving their academic skills.

The current study was planned to determine the effects of cognition improvement strategies on academic performance, stress and sleep quality of medical students.

The cross-sectional study was conducted from March 2019 to March 2020 at the Dow University of Health Sciences (DUHS), Karachi, which is a large-scale public-sector university. After approval from the institutional ethics review board, the sample size was calculated using OpenEpi calculator www.openepi.com19  while keeping the lowest frequency of substance use at 2%, confidence limits as 1% at 95% confidence interval (CI). The sample was raised using consecutive sampling technique. Those included were medical students regardless of gender and academic year who volunteered to participate. Students who were on anti-depressant therapy or withdrawal rehabilitation therapy at the time of the study were excluded.

The participants were enrolled after they filled out a survey form through online Google Forms and printed questionnaires. The language of the survey form was English over which the subjects had a good command. Both the online and printed questionnaires were identical to standardise the data-collection process and to maintain the authenticity for eradication of potential sources of bias. All data was voluntary and was based on participant’s own perception and assessment of substance usage. The participants were complimentarily given relevant information in the form of a brochure related to substance abuse.

The survey instrument comprised multiple questions regarding the participant’s sociodemographic data, including age, gender, year of study, institute, job/volunteerism. The data was collected anonymously. The participants were asked about their source of cognitive enhancer, frequency and timing of intake, and average daily intake.

To appraise the sleep quality, the Pittsburgh Sleep Quality Index (PSQI) was used.20  The total score ranging from 0 to 21 was calculated by the sum of seven sub-scores ranging 0-3. A sum of 5 or more indicated poor sleep quality, while a total score of 4 or less meant good sleep quality.

The subjects were asked if they tried to quit any specific substance that they were consuming. They were questioned about the reasons for taking these substances and the adverse effects they encountered upon consumption, which were further categorised into neurological, cardiac and digestive complaints. Lastly, their awareness regarding the constituents of cognition-enhancing items and their potential adverse effects was assessed. A pilot study was conducted for pretesting the questionnaires, and necessary changes were made.

The whole process was carried out in accordance with the STrengthening the Reporting of OBservational studies in Epidemiology (STROBE) guidelines (Annexure).22 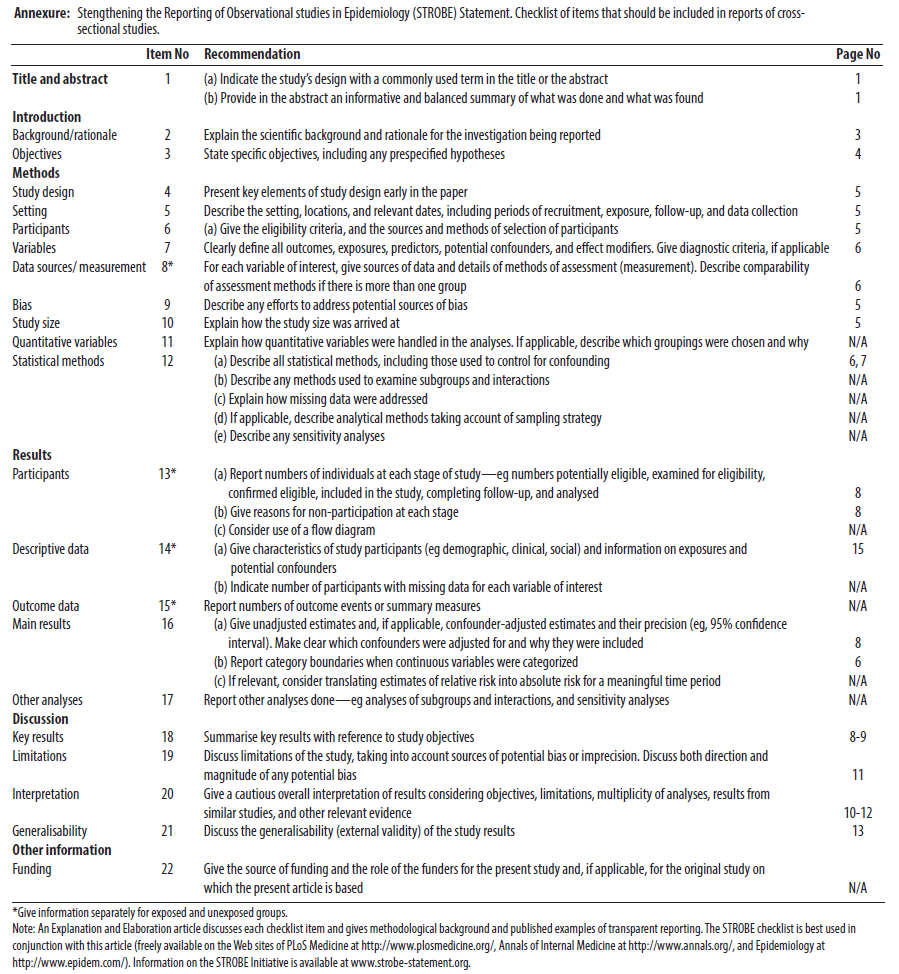 Data was analysed using SPSS 25. Categorical variables were expressed as frequencies and percentages, while quantitative variables were reported as mean±standard deviation. Descriptive analysis was carried out for the assessment of qualitative variables. The methods of cognitive enhancers consumption was compared with GPA ranges by using the chi-square test. For the evaluation of stress and sleep, total PSS and PSQI scores were compared to methods of consumption with the help of one-way analysis of variance (ANOVA) test. Data was found to be normally distributed as assessed by Kolmogorov-Smirnov test and Shapiro-Wilk test. Univariate analysis was conducted to explore the relationship involving the consumptions of cognitive enhancers, GPA, stress and sleep. P<0.05 was considered statistically significant. 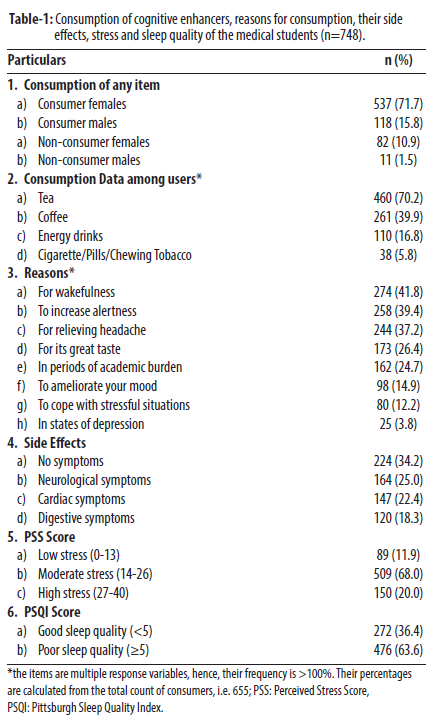 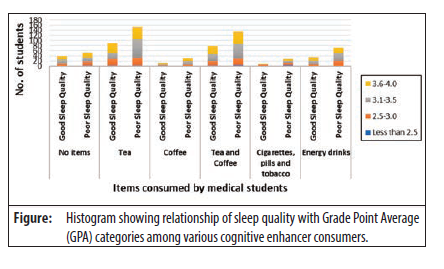 Cigarette, chewing tobacco/naswar and pills for cognitive enhancement were interpreted as control items. Of the total, 206(27.5%) subjects were able to remain symptom-free without the consumption of their substance of interest for approximately 21-24 hours. Among the 655(87.6%) consumers, 165(25.2%) reported an attempt to quit. Overall, 596(80%) subjects were aware that cognitive enhancers can cause addiction, while 417(55.7%) participants were not aware that taurine is a vital ingredient of energy drinks.

Tea is the most widely consumed cognitive enhancer in the Indo-Pak region. Consequently, tea was found to be the most popular stimulant both in male and female students in the current study. Though the majority of students enrolled in the university and in the current study were females, tea was an equally popular stimulant in both the genders. A recent study conducted on the same population reported similar results.7

It is presumed that increased consumption of cognitive enhancers would have beneficial effects on academic performance. However, in the current study, no significant relation was found between the two, as was reported by studies conducted in Europe23   and the United States.24

Majority of the students were found to be in moderate stress, but no significant relationship was found between the consumption of cognitive enhancers and stress levels of medical students, which was in line with an earlier study.23

The main reasons for consumption of items in the current study were to remain wakeful, to increase alertness, to relieve headache, and to be able to cope with academic stress. An American study showed that almost half of the participants used cognitive enhancers mainly to stay awake.26

Any substance which messes with the brain chemistry has adverse effects if misused. A study showed physical and psychiatric side effects of nootropics on consumers.27   Students may benefit from these substances in the short term, but in the long run they can lead to adverse consequences. The current study demonstrated that the most common side effects due to excessive consumption of cognitive enhancers were neurological, followed by cardiac and digestive symptoms. Having knowledge of the adverse effects of cognitive enhancers on the body is essential for medical students since it is an important domain of neurosciences and psychiatry. The study found that almost 80% medical students were aware of the terrible consequence of cognitive stimulants i.e., addiction. The results are supported by a study done in Egypt.28

In the current study, only about one-fourth of the consumers of cognitive enhancers tried to quit. The prevalence of substance abuse, like alcohol, cannabis and other allopathic drugs, is not high among medical students at DUHS. Also, the likelihood of nootropics, like tea or coffee, causing intolerable addiction is highly unlikely. Therefore, there is not enough data to demonstrate that medical students tried to abandon the substances they were consuming.

The primary limitation of the current study was that the number of female participants greatly exceeded the number of male counterparts. Also, the dose-response relationship could not be evaluated. The length of the questionnaire caused exhaustion among the respondents and could have led to memory bias. Most of the data was self-reported, lacking the authenticity of the facts and figures deduced. Many participants might not have reported the use of certain illicit drugs, probably owing to the stigma these substances hold in society.

In terms of strengths, a pilot study was done for pretesting the questionnaires. Consequently, changes were made on the basis of the feedback. Also, the study population was diverse, involving students from multiple departments of the same university. Besides, standardized scales were used to assess the stress and sleep quality of the participants.

The current study has highlighted the need for devising policies along with the promotion of educational campaigns, stress management seminars and expanded nutritional programmes. Proper measures should be enforced in educational institutions to limit the use of these substances on campuses. Also, there is a need for data to be gathered and disseminated among students and public health centres.

Majority of the students were found to be consuming cognitive enhancers, but no significant association of the stimulants was found with either academic performance or stress. The association with sleep quality, however, was significant.

Acknowledgement: We are grateful to all the study participants.

4.      Maier LJ, Liechti ME, Herzig F, Schaub MP. To dope or not to dope: neuroenhancement with prescription drugs and drugs of abuse among Swiss university students. PloS one 2013; 8: e77967.

23.    Lengvenyte A, Strumila R, Grikiniene J. Use of cognitive enhancers among medical students in Lithuania. Nordic Studies on Alcohol and Drugs 2016; 33:173-88.