Objective: To assess the relationship of tumour necrosis factor-alpha with obstructive sleep apnoea and its severity in Pakistani population.

Conclusion: Higher levels of tumour necrosis factor-alpha were found to be associated with obstructive sleep apnoea, and can be considered a potential biomarker for early diagnosis.

subjects.3-5The severity of OSA is measured by the frequency of apnoea and hypopnoea per hour of sleep, called the apnoea hypopnoea index (AHI), recorded using polysomnography (PSG) which is the gold standard diagnostic test for OSA that works to record electrophysiological signals during sleep.6 EDS, which is a cardinal feature of OSA, can be determined by Epworth sleepiness scale (ESS), which is a validated brief questionnaire. It determines the likelihood of falling asleep during different daily life situations.  Score >9 indicate EDS and, as such, the chance of having OSA.7 OSA is the cause of a considerable burden on individual and public health and is evaluated to affect 34% of males and 17% of females.8

Tumour necrosis factor-alpha (TNF-α) is an important multifunctional proinflammatory cytokine mostly secreted by mononuclear macrophages, Natural Killer (NK) cells and other immune cells.9  Its role in a variety of physiological function and various disease aetiologies has been studied and is well-documented. TNF-α influences whole organism functions, such as body temperature, inflammation, appetite, neurogenesis, cognition, memory, depression, micro-circulation, fatigue/performance.10  It plays a crucial role in host defence and its inappropriate production is the origin to several diseases, such as cancer, infectious disease and cardiovascular diseases (CVDs) like atherosclerosis.9  One important implication of its role is in sleep regulation. Substantial evidence indicates that acute enhancement of TNF-α promote sleep while its inhibition inhibits sleep. It has been shown to promote non-rapid eye movement sleep (NREMS) duration in every species tested.3,10 Studies have demonstrated the up-regulation of TNF-α expression in animal models of sleep disturbance along with cognitive and mood disturbances, while reversal of these disturbances were seen after treatment with TNF-α neutralising antibody.3

A number of studies have been conducted in Pakistan to examine TNF-α association with some diseases, like diabetes,11  congenital heart diseases,12  osteoporosis,13  metabolic syndrome14  and in relation to X-ray exposure.15  No study has evaluated the role of TNF-α in OSA, which is a neglected but potentially harmful condition. The current study was planned to fill the gap by assessing the relationship of TNF-α with OSA and its severity.

The cross-sectional study was conducted at the Sleep Laboratory of Dow University Hospital, Karachi, from December, 2018, to March, 2020. After approval from the ethics review committee of the Dow University of Health Sciences (DUHS), Karachi, the sample size was calculated using OpenEpi online calculator,16  using mean difference from an earlier research.2  The sample was raised using consecutive sampling technique. An informed consent in English/Urdu was explained and got signed from all individual(s) before participation. Those included were patients of either gender having symptoms of snoring, witnessed apnoea or daytime sleepiness, having indication for polysomnography with ESS score >9. The cases were selected after confirmation of OSA through overnight polysomnography (Alice 6 LDX, Philips Respironics) under continuous monitoring. Those with current surgery, pregnancy or individuals with current serious illness were excluded.

The subjects were divided into four groups on the basis of their OSA status; those without OSA Group A, mild OSA Group B, moderate OSA Group C, and severe OSA Group D. Polysomnographic assessment demonstrated characteristics of sleep phases as well as AHI. OSA subjects were categorised as mild (AHI: 5-15), moderate (AHI: 15-30) and severe (AHI>30) based on the Chicago Criteria by the American Academy of Sleep Medicine.17  History and demographic information were compiled using a predesigned proforma. Vacutainer tubes containing ethylenediaminetetraacetic acid (EDTA) was used to collect 5ml venous blood sample, after PSG recording between 6am and 8 am. Samples were processed on centrifuge machine for 20min with 2000rpm and the separated plasma was stored at -80°C until further investigations.

Data was analysed using SPSS 20. Quantitative variables were expressed as mean+standard deviation, while qualitative variables were described as frequencies and percentages. Mean TNF-α values were compared among the four OSA-based groups using analysis of variance (ANOVA). Analysis of covariance (ANCOVA) was used to assess mean TNF-α value in relation to OSA severity after controlling the potential effect of age and body mass index (BMI). P<0.05 was considered statistically significant. 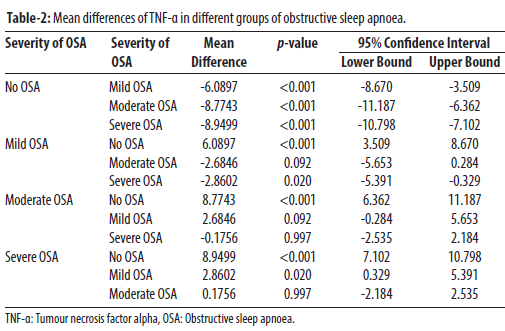 Mean TNF-α levels showed significant association with OSA severity as explained by partial eta squared value of the total variance remaining after accounting for variance explained by other variables, like age and BMI in the model (Table 3, Figure). 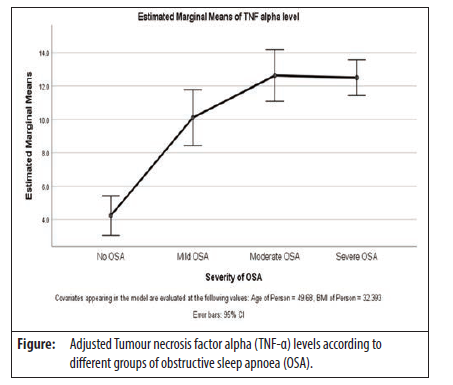 The findings suggest that TNF-α could be considered a biomarker for OSA patients with different levels of severity. Previous studies from different countries have reported conflicting data. Some have observed  significantly higher levels of circulating TNF-α in OSA, while others did not.18  More interestingly, there is a wide difference in plasma levels in different populations, like a Chinese study showed higher levels of TNF-α plasma levels in both OSA and controls,19  while lower levels in both OSA and controls were reported in American population.20  Both studies, however, showed significantly higher levels in OSA compared to controls. A Japanese study reported 1.11 pg/ml and 0.60pg/ml levels in severe OSA and controls respectively20 and another study reported 28.60 pg/ml 25.00 pg/ml levels in severe OSA and controls.18  In the current study it ranged from 12.83 to 3.88 pg/ml in severe OSA to no OSA group. This wide differences in TNF-α levels indicate that it is not only due to ethnicity, but also the study population and difference in methodology. Yoshikawa et al. examined 22 OSA patients and found a positive correlation of TNF-α with AHI.21   Ming et al. examined 684 OSA subjects and 192 healthy controls, and found significantly higher TNF-α levels in cases (31.2±5.3 vs 12.1±1.1).2 The current study found a positive association of TNF levels with AHI, and the finding was in line with earlier studies,17-20 which demonstrated the association of TNF-α with sleep-related breathing disorders and suggested that TNF suppression could decrease OSA progression. Studies have suggested that airway inflammation might have a role in the pathogenesis and natural history of OSA.1

On the other hand, some studies have reported contradictory results. Behboudi et al. examined Swedish OSA population and didn’t get positive results for this association.5  Dogan et al. evaluated a sample of Turkish population, with 33 OSA and 24 control subjects, and didn’t find significant difference between them (p=0.722).4  Two main differences between the earlier studies (4,5) and the current study were in terms of sample size and ESS scores. With a larger sample size, the current study is more convinced for its findings. Secondly, the presence of EDS, indicated by high ESS score, even in their control groups could be a factor to get similar results in both groups. They explained that higher ESS scores in the controls could be due to age, circadian factors and medical problems, while the current study selected its controls after evaluating their ESS scores.

These diverse findings reflect the fact that TNF-α levels can be influenced by a number of factors, such as CVDs, HTN, diabetes, asthma, smoking, certain medications as well as the heterogeneity of the selected population.14

Multiple mechanisms can be considered to understand this relationship. Freitas et al. explained its role to promote NREMS and the targeted disruption or inhibition of its receptors for the suppression of NREMS.22  Kheirandish at el. demonstrated that TNF-α leads to the stimulation of nuclear factor kappa B (NF-κB) pathways which leads to the activation of nitric oxide synthase, cyclooxygenase 2 and adenosine A1 receptors, and all of them are associated with sleep regulation. In an animal sleep fragmentation model similar to OSA, a study revealed nervous and other body tissues with considerable up-regulation of TNF-α expression, as well as cognitive and mood problems, comparable  to those appearing in OSA.23  Furthermore, marked reduction of all symptoms were noticed after treatment with TNF-α neutralising antibody, including sleep and behavioural disturbances.2,23

Although many OSA patients develop end-organ morbidities, but not all, which reflects the variability of clinical phenotype requiring proper investigation, particularly in relation to the inflammation. Continuous positive airway pressure (CPAP) therapy is a prime treatment option for OSA patients18 but it is not well-tolerated by many patients. Better understanding of pathophysiology is crucial to find more treatment options, especially for those who are not able to tolerate CPAP therapy.

It is believe that TNF-α could be a reason to promote upper airway dysfunction and other mechanism that lead to onset of OSA, but one should not neglect the possibility of reciprocal relationships, that OSA encourages a pro-inflammatory state and leads to higher TNF-α levels.3  Some studies described sleep deprivation and hypoxaemia as the causative factors for higher TNF-α levels in OSA.4  Halloran et al. described that intermittent hypoxaemia (IH), which is an essential feature of OSA, can encourage carotid body inflammation and leads to altered immune regulation and disruption in control of breathing that may predispose respiratory instability during sleep.24

Cardiovascular complications that frequently accompany OSA are thought to develop as a result of inflammatory stress associated with cytokines, such as TNF- α. Previous studies have been described TNF- α  as a predictor of future cardiovascular incidents and mortality.4 Many intermediate mechanisms have been proposed for the relationship of TNF-α, OSA and cardio-metabolic complications. Higher TNF-α may causes procoagulant activity and the deposition of fibrin, resulting in higher production of peroxide and cardiovascular damages. TNF-α may also cause neovascularisation and formation of atherosclerosis in OSA patients. Furthermore, TNF-α causes increased expression of adhesion molecules, causes lymphocytes activation and severe inflammatory reactions in lesion area.2  It is, therefore, suggested that higher TNF-α levels could be the potential link between OSA and its cardio-metabolic co-morbidities.

Biomarkers can provide insight into the pathological mechanisms of the disease and propose new therapeutic strategies. Based on the findings, the current study suggests that TNF-α has an important role in OSA pathophysiology, and could be a link between OSA and its co-morbidities via inflammatory pathways. However, exploration of systemic inflammatory pathways is not conclusive in finding a particular biomarker as a prognostic factor for OSA or causative agent for related co-morbidities. Furthermore, given the frequency of co-morbidities in OSA, which, by themselves, increase the cardiovascular risk, all confounders are considerable factors. Future large-scale studies are suggested with interventional models comprising pre- and post-treatment assessment, and careful scrutiny of multiple potential confounders that are possibly related to OSA.3

Since data was collected from a single centre, the findings of the current study need to be generalised carefully.

A significant association was found between OSA and TNF-α, which may be involved in the occurrence and progression of OSA and might be a promising biomarker for OSA diagnosis. It can also be used to assess OSA severity and may facilitate the implementation of better treatment strategies for OSA patients in Pakistan. This relationship might also explain the higher incidence of CVDs and metabolic disorders in these patients.