Method: The cross-sectional, analytical study was conducted from January to October 2019 in Aydın province, Turkey, after approval from the ethics review committee of the Aydın Adnan Menderes University, Aydin. The study sample comprised agricultural workers of either gender. Data was collected using the Sun Protection Behaviour Scale. Data was analysed using SPSS 21.

Results: Of the 254 subjects, 127(50%) each were males and females. Mean overall Sun Protection Behaviour Scale score was 20.29±5.61 and there was no significant differences in terms of gender, marital status and socioeconomic stratification (p>0.05). Sun Avoidance and Sunscreen Use subscale scores were high for female workers, while Hat Use behaviour score was high for the males (p<0.05).

Conclusion: The sun-protection level of agricultural workers was not found to be sufficient, with males, those with sunburn, and those having no knowledge about skin cancer showing more risky behaviours.

The agricultural sector has its hazards, but a large number of people are generally associated with it in every country owing it its unavoidable nature.  People active in agriculture face many risks of work accidents and occupational diseases. Due to the inherent risks, agriculture workers face health problems, such as respiratory system diseases, cancers, injuries and accidents.1,2 Agricultural workers are especially at risk for sun-related diseases because of working in the fields for long hours. The most important of these are sunspots, allergies, urticaria, acne rosase, fungal skin diseases and cancers.3  Skin cancer is known to be a condition characterised by wounds caused by uncontrolled growth of some cells that make up the skin. This often occurs in sun-exposed people. Ultraviolet (UV) radiation is an important and preventable risk factor for skin cancers. It is thought that if proper protective measures are taken with respect to UV radiation,4 out of 5 skin cancer cases can be prevented.3-5

In recent times, agricultural workers have been exposed to UV rays more intensively as a result of the increasing thinning of the ozone layer, which is an important risk factor for skin cancer.6 UV rays directly cause deoxyribonucleic acid (DNA) damage and leads to the development of skin cancer.4,5UV radiation from the sun is held responsible for 86% of melanomas and 90% of non-melanoma skin cancers.1,5Since UV rays play an important role in skin cancer epidemiology, protection from the sun is important.7-9Turkey is a country with high solar radiation due to its geographical location, and the agricultural workers active in the open fields are at particular risk of skin cancer. Knowing the behaviours of agricultural workers towards sun protection is the first step towards determining the measures to be taken for them.1,2,4

As skin cancer is both an economic burden and a serious health problem, and it is important to increase the awareness status of society and of individuals.1,10In order to protect against skin cancer, regardless of the skin type, the farmers should wear wide-brimmed hats and sunglasses, preferably sun shades, to be protected from direct sunlight, and when the sun is intense, one should wear protective sunscreen.1,5,10-13 Applications that prevent skin cancer should never be neglected and regular trainings on skin cancer prevention should be organised and attention should be paid to get the learning implemented.1,10,11 Risky groups in terms of skin cancer should be identified and screening programmes ought to be initiated.1

Any individual has a risk of developing skin cancer, but people with fair skin, lots of moles and blemishes, long-term sun exposure, and a history of sunburn during childhood are more likely to get skin cancer.3,5,6

The current study was planned to determine the sun-protection behaviour pattern and level of agricultural workers in the western region of Turkey.

The cross-sectional, analytical study was conducted from January to October 2019 in a village in the Aydın province of Turkey having Mediterranean climate, with summers being hot and dry, and winters being warm and rainy. The study universe was 1184 agricultural workers living in a rural village in western Turkey in 2019. After approval from the ethics review committee of the Aydın Adnan Menderes University, Aydin, the sample size was calculated using G-Power calculator with 0.05 significance level and 80% power.11,12,14 The sample was raised using systematic sampling technique. A list of all the 324 houses in the village was generated, and every third household was visited. Data was collected during the home visits.

Those included were individuals aged 18 years or above, engaged in agricultural work and literate. Those with hearing, speaking, seeing and understanding problems were excluded. Informed consent was obtained from all the subjects.

Data was analysed using SPSS 21. Descriptive statistics included mean, standard deviation, frequencies and percentages. Student's t-test and one-way analysis of variance (ANOVA) were used for comparing normally-distributed fata, while Mann Whitney U and Kruskal Wallis H tests were used for non-normally distributed data. Within the scope of normal distribution analysis, Gauss curve was evaluated and mean score with range were used, while Kolmogorov-Simirnov test was used for evaluating the significance level. P<0.05 was considered statistically significant. 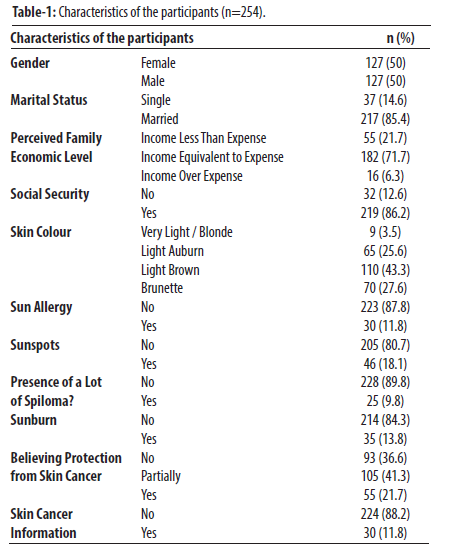 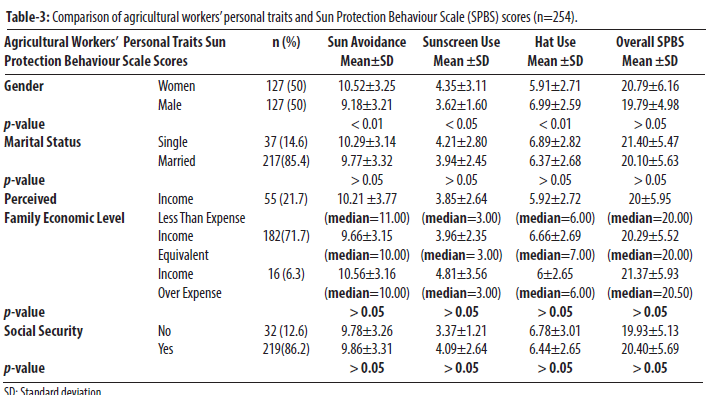 There was no significant differences in overall SPBS scores in terms of gender, marital status and socioeconomic stratification (p>0.05).

There was no significant difference between skin colour, sun allergy, sunspots, presence of a lot of spiloma, and the overall SPBS scores and subscales of the subjects (Table 4). 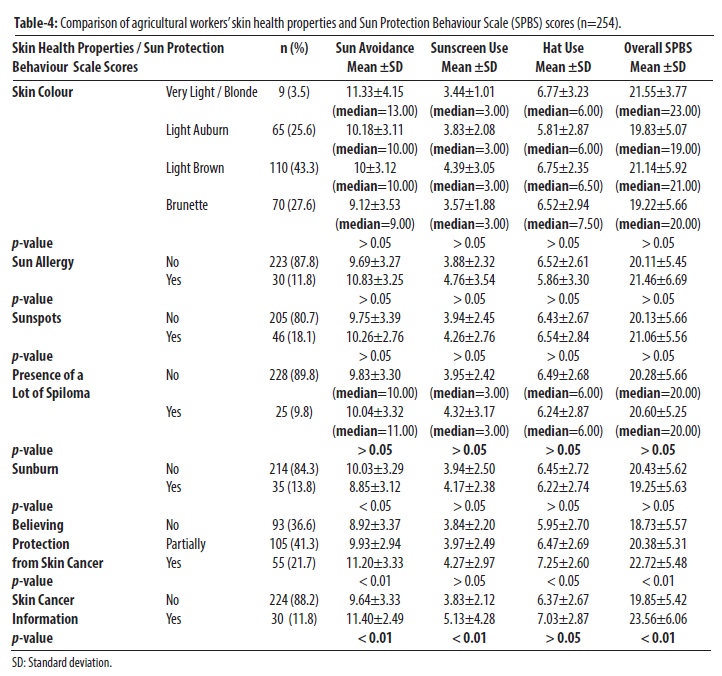 One of the main causes of skin cancer is reported to be exposure to sun rays. Turkey is a country with high solar radiation due to its geographical location, and agricultural workers working in the open area are especially at risk for skin cancer. Knowing the behaviours of agricultural workers towards sun protection is the first step in determining the measures to be taken for them.1

Studies among university students  and nursing students reported that sun protection usage behaviour was low.15,16One study found that only half of the students used hats when at the beach, and the use of sunscreen was very low.17 Another study reported that the students had low attitude and behaviour scores towards melanoma risk.18 In the current study, SA and HU scores of the agricultural workers were at the medium level, while SUI score was worryingly low. The reason could be lack of knowledge regarding sunscreens among the workers.

The SA and SU levels of female workers in the current study were higher compared to the male workers, while it was the reverse was HU.

International studies reported that women have better knowledge than men about using sun protection methods, sun exposure and tanning.19-21A study found that female students had higher scores on SA and SU behaviour, and that women had better knowledge about SA and skin cancer.22 One study reported that the use of sunscreen cream was high in women.23 Culturally and religiously, it is common for women in the Turkish society to cover their heads. This behaviour is more common, especially in the rural areas. For this reason, lesser women were found to be wearing hats than men, and they protected themselves using sunscreens.

No significant difference was found between sun protection levels and worker's marital status, economic status of the family and social security status (Table 3).

In the current study, the sun protection levels were significantly higher in workers who had sunburn at any time in their lives (Table 4).

According to the current findings, the condition of not having sunburn, believing in the need to protect against skin cancer, and having knowledge about skin cancer were directly related to sun protection behaviour. A study found a negative relationship between sunburn and wearing a hat among students.25 Studies have predicted that the risk of melanoma will be twice as high in individuals having experienced five or more severe sunburns, especially in the early stages of life.7

Kahraman et al. found no significant difference between using sunscreen and self-assessment of skin cancer risk.26It can be suggested that having knowledge about skin cancer positively affects the protective behaviour.

One study concluded that light-skinned students had better sun protection behaviour,16 while another one found no significant difference between the skin colour, the presence of an asymmetrical, irregularly structured nevus >5mm in the body, and the use of sunscreen.26 No study comparing sun allergy, sunspots and sun protection levels was found in literature.

The current study has limitations as it comprised agricultural workers living in a single rural region, and the data was self-reported.

In the light of the findings, it is recommended that studies should be carried out on larger samples, comparing sun-protection behaviours of agricultural workers in different regions. Besides, awareness on the matter must be raised among agriculture workers.

SA and HU scores of the agricultural workers were found to be at the medium level, while the level of SU was low. The behaviour of female workers about SA and SU was better than the males and the opposite was true for HU.

26.     Kahraman AT, Aksakal FNB, Dikmen AU, Büyükdemirci E, Güven  AE.Over the age of 15 applying to some family health centers in Ankara the level of knowledge of people about sun rays and skincancer and sun protection conditions. CBU-SBED 2018; 5: 138- 44.