Objective: To determine the association of sleep wake pattern with cognitive performance and academic achievement in young adults.

from the Institutional Review Board & Ethics Committee of the study

Islamabad. Exclusion criteria included all those students who were

married, diagnosed with psychological disorder and were taking any

addition to inquiry regarding GPA of latest exam.

There is a significant association between cognitive performance and academic achievement with high achievers being definite morning types.

The human brain undergoes significant changes both in its structural and

techniques have allowed us to observe these changes safely in the

human in vivo. Studies have been conducted on the neurobiology of

observed in brain physiology and anatomy across childhood and

adolescence. It shows that cortical function becomes fine-tuned with

development. Brain areas associated with more basic functions such as

of cognitive decline before the age of 60. This, however, is not universally

accepted. Some studies showed a profound relation between

neuropathology and the severity of cognitive decline. It showed how the

lifestyle. Emerging consensus have shown that adults aged under 60 are

fitness. Cognitive health is an important part in ensuring the quality of

life and independence of people. Cognitive health is important in

many aspects such as being socially active, being independent, ability to

recover from illness or injury and functionally lost abilities.4

A person’s quality of life can be disturbed due to many different reasons.

A major reason is sleep loss. Working hours are increasing along with an

It is the demand of many professions such as health care, security and

transportation to work at night.<5

altering the cognitive performance of an individual. Quality of sleep is

compromised in those who are involved in extended working hours.

and efficiency in their workplace which puts their health at risk.6

Many college students are at risk for sleep disorders, and  have an equal

chance of academic failure. Full-time students experience stress due to

a high bulk of studying material resulting in sleep  disorders.7

Alternatively, not obtaining sufficient sleep may also affect the cognitive  level and academic performance in young adults.8Therefore, it is  preferable that along with education, recreational counseling and sports  programmes should be promoted in order to enhance the students’  mental health and hence their educational performance.9 The extent of sleep problems is more prominent in young population  especially undergraduate medical students. According to a Chinese  study, 90% of sleep deprivation in young adults is more common in  males. The average time period of sleep is 6.6 hours.10 Cognitive  impairment has association with irregular sleep patterns.11 However,

influence on academic performance amongst young adults in Pakistan.

This research can benefit young adults by creating awareness amongst

and overall academic success. The study aims to determine the

association of sleep-wake pattern and quality of sleep with cognitive

performance and academic achievement in young adults alongside

determining the difference in sleep quality, pattern and cognitive

function between high and low achievers.

This is a cross sectional survey to determine the association of sleep-wake cycle with the cognitive function and how these factors affect the academic performances in young adults. The study was conducted in March 2019 in Dar-ul- Shifa campus, Shifa Tameer-e-Millat University, Islamabad, after issuance of approval from the Institutional Review Board & Ethics Committee of the study setting on February 28, 2019. Using the Rao soft online software with a confidence interval of 95% and margin of error as 5% for the total population of 370 DPT students, a sample of 189 was obtained but due to the availability of students in the same setting, we were able to collect data from 236 students.12 The participants of age 18 to 24 years, healthy adults and both genders from Doctor of Physical Therapy department were included in the study. Students who were married, taking any sedatives and with diagnosed psychological disorders were excluded.

For data collection, GPA of each student was inquired and those scoring higher and equal than 2.5 were considered as high achievers. In addition, three questionnaires were used including Pittsburgh Sleep Quality Index (PSQI) which is a highly reliable and valid standard tool used to assess sleep quality. The PSQI questionnaire consist of 9 items with further 10 subunits in item 5, scoring from 0 (good quality) to 21 (poor quality).13 Morningness-Eveningness Questionnaire consists of 19 questions used to assess the sleep-wake behaviours and schedules. Scores on the MEQ range from 16 to 86, with low scores (16–41) indicating eveningness, and high score (59–86) indicating morningness. It has five subtypes; deﬁnitely evening (DE) type, moderately evening (ME) type, normal (N) type, moderately morning (MM) type, and deﬁnitely morning (DM) type.14 Montreal Cognitive assessment (MOCA) was performed practically with scores greater than 26 considered normal, having the components which are visuospatial/executive, naming, memory, attention, language, abstraction, delayed recall and orientation.15 On the first day after filling the consent forms, the participants filled the questionnaires themselves and then MOCA was performed by asking questions about naming words, checking the attention and recall, language, orientation and clock drawing test as well. Independent t test was applied to analyze the difference of sleep-wake cycle and cognition between high and low achievers while spearman correlation was applied to analyze correlation of sleep quality and pattern with cognition and academic achievement with significant value considered less than 0.05. All the data was statistically analyzed on SPSS version 21. Written consent was taken from the participants. They were assured that their confidentiality would be preserved.

The research questionnaire was distributed to 255 people and in return 236 responses were received therefore 92.5% was the response rate. The mean of sleep duration of students was 6.63±0.74 hours. 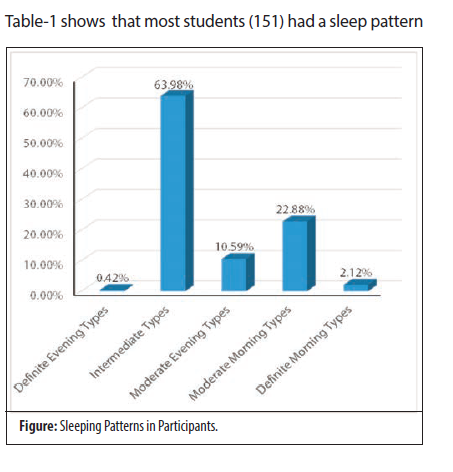 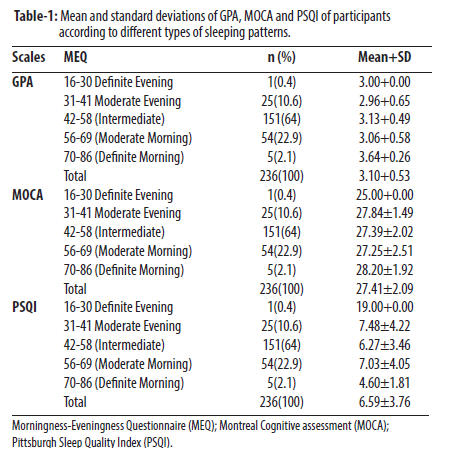 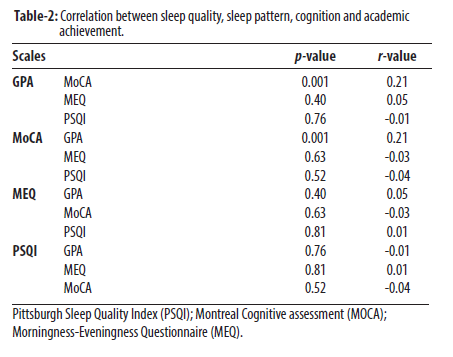 The current study was conducted to determine the association of sleep wake pattern and quality with cognitive performance and academic achievement in young adults. The results showed that there was no significant relationship of sleep quality and sleep pattern with cognitive abilities. However, a positive correlation was found between academic achievements and cognition. The results also showed that students who are high achievers, were definite morning types.

In this study, there is a close association between cognition and academic achievements. A p-value of <0.05 shows a significant relation between cognitive abilities and GPA. Similarly, a study conducted by Laura B. Zahodne et al. suggested that more years of education was associated with higher cognitive level and slower cognitive decline. It supported the fact that cognitive functioning was better in those having higher education.16

The current study showed no significant association between sleep and academic achievements. In contrast, a cross-sectional study conducted in Ethiopia by Seblewengel Lemma et al among undergraduate students in two public universities showed that students who had poor sleep hygiene showed poor performance during the day that affected the academics as compared to the students who had better sleep hygiene and having higher CGPAs every year.17 Majority of our participants live with their families and a very limited number of students lived in hostels so they have less exposure to environmental factors such as noise.

This study showed that those who had normal MoCA scoring with good cognitive skills had attained a good GPA in their recent exams. In contrary to this, a meta-analysis done by Ana Costa et al concluded that there was a low association between intelligence and students' academic achievements.18 This might be due to the cultural differences of the students who were included in the meta-analysis.

The current study showed a positive significant correlation that students with good grades were definite morning types. A similar study was carried out by Yuliya Modna et al. to determine the factors of morningness and eveningness and their effect on academics, the results of which showed that students with higher GPA were those with morning chronotypes i.e. students with morning chronotypes tend to cope up with difficult subjects better than evening chronotypes.19 Only one study setting was used to collect data. There is a possibility of recall bias due to use of self-reported questionnaires. A comparative study between students of different disciplines and multiple universities should be conducted. Also, study should be conducted regarding the gender-based differences in sleep-wake cycle, cognitive function and academic achievement.

This concludes that there is a positive weak correlation among cognitive performance and academic achievement i.e. GPA. Students who are high achievers, have good cognition and vice versa. Another aspect concluded from this study regarding the association of sleep pattern and grades is that students who have good GPA are definite morning types. However, no significant correlation could be found between sleep pattern, sleep quality and cognition.

The manuscript has been taken from Thesis Project of Doctor of Physical Therapy (DPT) degree.