Objective:  To determine the frequency of use of various psychoactive drugs among medical students in an urban setting, and to assess the risk category and intervention needs.

Methods: The descriptive cross-sectional study was conducted from January to June 2018 at four medical education institutions of Karachi; 2 each randomly selected from registered public and private sectors. From the clinical classes of each institution, fourth year was randomly chosen by lottery method. Data was collected using the Alcohol, Smoking and Substance Involvement Screening Test version 3.0. Data was analysed using SPSS 20.

Conclusion: Tobacco was the most commonly used psychoactive drug among medical students though the use of cocaine, cannabis, alcohol, amphetamine, inhalants and sedatives was also significant. Psychoactive drug use was more common in males compared to females.

The non-medical use of dependence-producing drugs is not a new phenomenon1 and it is associated with a significant public health burden. Tobacco, alcohol and illicit drugs are among the top 20 risk factors for ill-health identified by the World Health Organisation (WHO).2

According to a WHO drug report, about 275 million people worldwide, almost 5.6% of the global population aged 15-64 years, used drugs at least once during 2016. Some 31 million people who use drugs suffer from drug use disorders. Initial estimations suggest that, globally, 13.8 million young people used cannabis in the preceding year, equivalent to a rate of 5.6%.3 Illicit drug dependence directly accounted for 20million disability-adjusted life years (DALYs).4

Worldwide, the age-standardised prevalence of daily smoking is 25% for men and 5·4% for women.5 Tobacco alone is responsible for 8.8% of all deaths and for 4.1% of the global burden of all diseases. Excessive alcohol use and other substance abuse are also risk factors for a wide variety of social, financial, legal and relationship problems for individuals and their families. Globally, there is an increasing trend of people using multiple substances, either together or at different times, which is likely to further increase the risks.5

Worldwide, the problem has been recognised and freedom from drug dependence has been identified as the one of the essential elements to ensure wellbeing. Sustainable Development Goals (SDGs), officially known as Transforming our world: the 2030 Agenda for Sustainable Development, is a set of 17 "Global Goals" with 169 targets. Spearheaded by the United Nations through a deliberative process involving its 193 member states, as well as global civil society, the goals address key factors necessary to provide a safe future.6 SDG3 is: ‘Ensure healthy lives and promote wellbeing for all at allages. SDG3.5 states: “Strengthen the prevention and treatment of substance abuse, including narcotic drug abuse and harmful use of alcohol”.7 This highlights the fact that controlling drug dependence is essential for healthy lives and wellbeing.

Evidence from different regions in India8-10have estimated a prevalence rate of substance abuse to be around 20-40% among students, including those in the medical field. According to the 2013 national survey report issued by the United Nations Office on Drugs and Crime, 4.25 million people in Pakistan were considered dependent on substances and require structured treatment for their drug use disorder, cannabis being the most commonly used drug, with around 4 million users nationwide.7 Medical students enter their profession after hard competition and they are generally referred to as the ‘cream of the nation’, they have ability to influence their peers. These students are future healthcare providers (HCPs), so, irresponsible behaviour of the students can have wider implications on society. The current study was planned to assess the magnitude of psychoactive drug abuse in medical students at an urban centre by using the WHO’s Alcohol, Smoking and Substance Involvement Screening Test (ASSIST), which was developed by an international group of substance abuse researchers to detect psychoactive substance use and related problems in primary care patients, especially developed to screen substance abuse in primary healthcare setting.11

The descriptive cross-sectional study was conducted in Karachi from January to June 2018. After approval from the institutional ethics review board of Armed Forces Postgraduate Medical Institute, Rawalpindi (No.0157-AAA-ERC-AFPGMI). The sample size was calculated using WHO sample size calculator12 with prevalence of smoking 19.1%,13 alpha 0.05 and required precision 4%. It was further adjustedby20% for non-response and missing data. There are 18 registered medical education institutions in Karachi;5 in the public sector and 13 in the private sector. Stratification was done as public and private medical colleges. Four medical colleges were chosen through random sampling by lottery method from the sampling frame; i.e. two from the public sector and two from private sector. Preclinical classes were excluded, Final year was not present at the time of data collection, so fourth year was selected by draw among two classes. All students present in the class on the day of data-collection were approached and those who gave informed consent were included. To maintain confidentiality, the name of the institution or the respondent was not required on the questionnaire.

Risk and intervention need was assessed for all drugs except alcohol as follows: score 0-3=low risk/no intervention; 4-26 = moderate risk/brief intervention; and 27 and above = high risk/intensive treatment.

Data was analysed using SPSS 20. Mean and standard deviation were used to express continuous variables, while frequencies and percentages were used to describe qualitative variables. Chi-square test of significance was applied to determine if there was significant difference between the genders in using psychoactive drugs. Score of each student for each psychoactive drug was calculated by adding the weight of responses (Table1) and risk category and intervention need was identified. P<0.05 was considered statistically significant. 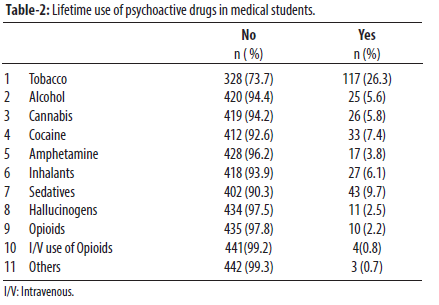 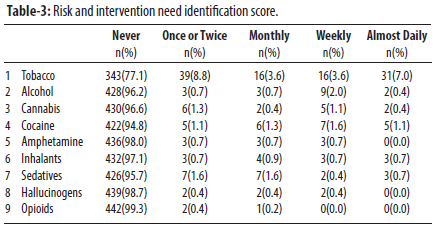 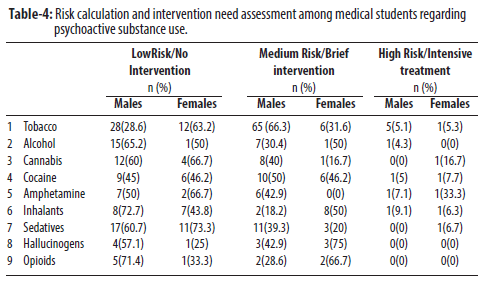 Substance abuse is becoming one of the major health-related issues for young adults in different streams of life. In the current study, 38.7% students had used some psychoactive substance in their lifetime, In a study conducted in Abbottabad, Pakistan, 21.49%  medical students had used illicit drugs.14 The reason for this observation of  drug use may be prevalence of stress among medical students, as stress has been linked to the use of psychoactive drugs.15-17

Prevalence of tobacco use was found to be 26.3%, with 18% of the students being in moderate and high-risk categories. It seems to be higher than a study in India which stated that 20.43% medical students were using tobacco.18 Tobacco use in students was higher than the use in adolescents in general which is 12.4%, according to the global adult tobacco survey in Pakistan.13 Sedatives and cocaine use was reported by 9.7% and 7.4% students respectively. Alcohol use was much lower (9.7%) compared to the prevalence in Indian adolescents (21.4%).19 The same survey reported cannabis (0.3%) and opiod (0.7%) use which was much lower compared to the present study in which it was 5.8% and 2.2% respectively. Moreover, the use of cannabis and opioid was also higher compared to the young Pakistani population in which it is 4% and 0.5% respectively.20

Nonmedical use of prescription psychostimulants, such as amphetamine, for the purpose of cognitive enhancement is a growing trend in educational environments. In our study,3.8% (17/445) students reported having ever used amphetamine for nonmedical purposes, and 2% of them were in moderate to high-risk category. It was much lower than 18% reported by a survey in Chicago.21

Psychoactive drug use was significantly higher among male students (p<0.05). The findings are similar to other studies.22-24

One limitation of the current study was the male preponderance which might have resulted in response bias. Secondly, self-reporting data on drug abuse runs the risk of misclassification/reporting biases. Moreover, The inclusion of students in the early years might have resulted in different estimates of prevalence. Finally, the study was a descriptive cross-sectional study conducted in only one city, and, as such, the results are only generalisable to urban areas and not on rural ones.

Most medical students were found to be using tobacco, with lifetime prevalence of 26.3%. though the use of cocaine, cannabis, alcohol, amphetamine, inhalants and sedatives was also significant. Psychoactive drug use was more common in males compared to females.

16.    Mphele SBM. Stress and alcohol use among college students: a case of Molepolole College students. IOSR Journal of Humanities and Social Science 2013; 8: 1–6.