Objective: To investigate whether albumin-bilirubin score can be used as a prognostic marker in pancreatic cancer patients post-surgery.

Method: The retrospective study was conducted at the Medical Oncology Clinic, Karadeniz Technical University, Trabzon, Turkey, and comprised data from 2010 to 2018 of pancreatic cancer patients who had undergone distal pancreatectomy or pancreaticoduodenectomy and were followed up for 3 years. Preoperative and postoperative serum albumin, carcinoembryonic antigen, carbohydrate antigen 19-9, bilirubin, neutrophil:lymphocyte ratio and platelet:lymphocyte ratio were compared as inflammation markers, while albumin-bilirubin scores were calculated using the equation linear predictor. Data was analysed using SPSS 17.

Conclusion: The albumin-bilirubin score affected survival in patients with pancreatic cancer, and can be employed as a prognostic factor in this patient group.

Pancreatic cancer is a disease with high mortality, and is the fourth most important cause of all cancer-related deaths.1 Curative treatment is surgery, but since the disease generally exhibits symptoms late, most patients cannot be operated upon. Five-year survival among patients not receiving adjuvant therapy ranges 8-13%.2 Albumin-bilirubin (ALBI) grading is a scoring system developed to estimate the degree of liver function in patients with hepatocellular carcinoma (HCC)3. It entered into clinical use as an alternative to the Child-Pugh score used in patients with cirrhosis, and studies have also been performed with HCC patients.4 It is important to identify a prognostic marker in pancreatic cancer patients post-surgery because this patient group generally presents with recurrence and metastasis, especially if the patients were not suitable for neoadjuvant or adjuvant treatment and could not take additional treatment except surgery. To date, there is no standard prognostic marker other than carbohydrate antigen 19-9 (CA19-9), which is used in the follow-up of pancreatic cancer patients. The use of a clinically non-invasive marker provides convenience in follow-up. In some studies, it was determined that the study of CA19-9 may be insufficient to predict the prognosis of the disease.5This raises the question of whether a more sensitive marker can be used. Yagyu et al. found that when ALBI score and

The retrospective study was conducted at the Medical Oncology Clinic, Karadeniz Technical University, Trabzon, Turkey, and comprised data from 2010 to 2018 of pancreatic cancer patients post-surgery. After approval from the institutional ethics review committee, data was retrieved related to patients with pathologically confirmed pancreatic adenocarcinoma who had undergone distal pancreatectomy or pancreaticoduodenectomy and had been followed up for at least 3 years. Those with metastatic pancreatic cancer, any concurrent cancer at other sites, with infection findings, using steroids and anti-inflamatory drugs and renal impairment were excluded, and so were those with missing data.

Data was analysed using SPSS 17. Normality of distribution of continuous variables was assessed using Shapiro-Wilk test. Descriptive statistics for continuous variables were expressed as mean±standard deviation or median along interquartile range (IQR), as appropriate. Frequencies and percentages were used for categorical data. Differences between pre-op and post-op measurements were compared using Wilcoxon Signed-Rank test. Kaplan-Meier survival curves were plotted. Time-dependent survival rates and mean life expectancy along with 95% confidence interval (CI) were also calculated for clinical outcomes, like disease-free survival (DFS) and overall survival (OS). Whether each examined variable exhibited a statistically significant effect on clinical outcome or not was evaluated by means of univariate Cox’s proportional hazard regression analysis. Hazard ratios (HR) and 95% CIs for each independent variable were calculated. Multivariate Cox’s proportional hazard regression analyses were applied to determine the best independent predictors of both DFS and OS after adjustment for clinically important factors. Any variable with a univariable test p<0.10 was adopted as a candidate for the multivariable model. P<0.05 was considered statistically significant. 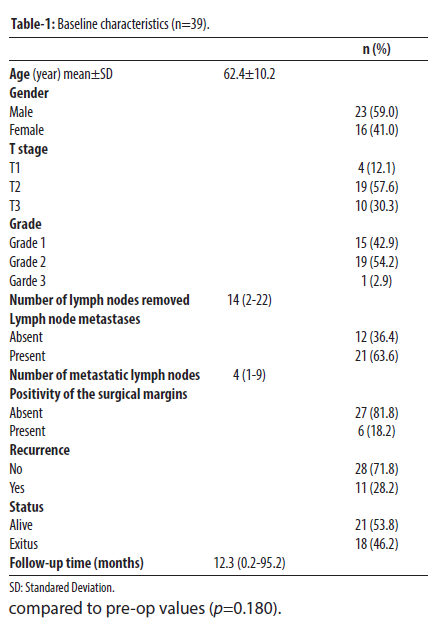 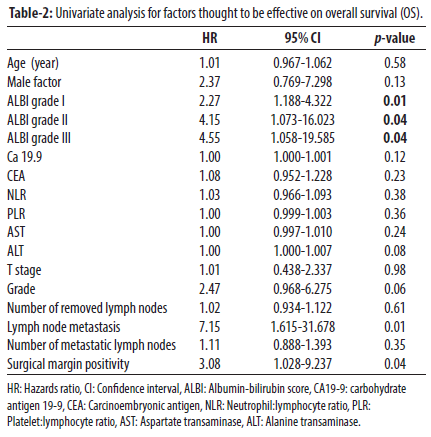 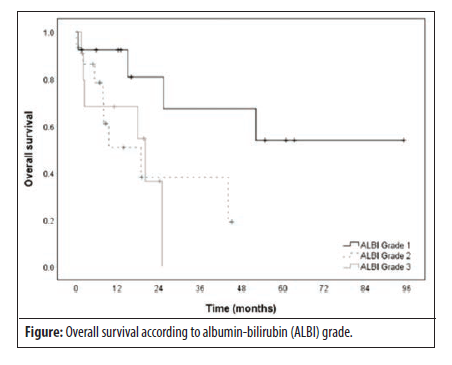 The current study was planned to determine whether any parameter can affect prognosis in pancreatic cancer patients post-surgery. The standard treatment in patients with pancreatic cancer is surgery and adjuvant chemotherapy. After curative resection, it was detected that adjuvant treatment improved both DFS and OS.9 But there may be some complications due to surgery and patients may not be suitable for adjuvant treatment. Neoadjuvant treatment may decrease the surgical complications and is well-tolerated by the patients. If a patient cannot take neoadjuvant or adjuvant treatment, recurrence may occur and close monitoring is needed. Some serum biomarkers are used to monitor the patients, like CA19-9. But this marker may be normal and is sometimes not correlated with disease progression. So, a new parameter is needed and the current study examined the effect of ALBI in this regard.

Mortality rate rose as pre-op ALBI scores increased. However, this was not statistically significant which can be attributed to the small number of cases in the current study. OS analysis showed that the mortality rate increased significantly in line with pre-op ALBI scores. This means that easily obtainable ALBI score may be a potential parameter for predicting pre-op OS. In a study on gastric cancer patients, it was thought that low albumin level was related with impaired nutritional status.7 Similarly, after pancreoticoduedonectomy, patients suffer from impaired nutritional status. As such, albumin levels decrease and affect the ALBI grade. In addition, the systemic inflammatory response that occurs during the course of cancer may affect serum albumin synthesis. Decreased albumin synthesis due to inflammation also affects the ALBI score and may worsen the prognosis of patients. Patients with liver dysfunction naturally have a worse prognosis. The increase in bilirubin may be due to obstruction in the biliary tract, and the increase in bilirubin increases the ALBI score. A higher ALBI score is also associated with a worse prognosis. So, bilirubin levels in the current study were measured post-surgery in patients requiring biliary drainage. Nonetheless, there were patients with very high bilirubin levels. This may also have affected ALBI values, and it may be more appropriate for measurements to be performed after drainage in cases in which biliary drainage can be established.

Studies have investigated NLR and PLR values in patients with pancreatic cancer. These haematological parameters are associated with chronic inflammation which has been shown to affect prognosis in some forms of cancer.10-12Similarly, there are studies anticipating that these may also be associated with prognosis in pancreatic cancer patients.13 A study in China evaluated 381 patients and found that preoperative NLR was an independent prognostic factor in patients undergoing curative surgery.14 Studies have shown that a high NLR is associated with poor prognosis.15,16Pre-op PLR has also been identified as an independent prognostic marker in pancreatic cancer patients post-surgery.17 In a meta-analysis of 17 studies, OS and progression-free survival (PFS) were found to be worse in pancreatic cancer patients with high PLR, and it was thought that it could be used as a prognostic marker.18 In the present study, NLR and PLR were examined as inflammatory markers, but were found to have no effect on either DFS or OS. One study linked C-reactive protein (CRP) and NLR to decreased OS.19 The current study did not examine CRP, and no difference was observed between pre-op and post-op NLR values, and no effect on survival was detected.

Tumour markers can be detected when they rise above normal in blood, urine and other body fluids, and are used to evaluate the diagnosis and treatment response of some tumours.20 The most common tumour markers used in patients with pancreatic cancer are CA19-9 and CEA.

CA19-9 is released from pancretaic ducts, gastrointestinal epithelial cells and biliary system. It is particularly recommended for assessing response to therapy in patients with pancreatic cancer.20 CA19-9 is associated with malignant tumour potential, and pre-op CA19-9 may be linked to tumour biological aggressivity.21 CA19-9 levels were examined in the present study and change in its levels did not affect survival. CEA levels may increase in patients with pancreatic cancer, and its clinical effect has also been investigated in some studies, but its sensitivity is lower than that of CA19-9.22,23In our study, recurrence rates increased in line with CEA levels, suggesting the possibility that CEA may also be a prognostic marker. It may be a particularly useful guide in patients without high CA19-9.

The principal limitation of the current study is the small sample size. The sample is also unbalanced. Data-loss concerning CA19-9 and CEA values in about 10 patients may have affected the statistical outcomes for CA19-9, in particular. The finding, as such, needs to be validated with larger samples. The fact that no cut-off point was determined for CA19-9 and CEA may also have affected the results. Another significant limitation is that ALBI grading was calculated with the method used in HCC, and five patients were identified as grade III. Further randomised controlled trials (RCTs) with larger samples are recommended.

ALBI affected survival in patients with pancreatic cancer post-surgery and can be employed as a prognostic factor in this patient group. Due to its non-invasive nature and the fact that it is calculated from serum bilirubin and albumin levels, the use of ALBI scores are likely to become more widespread in the future.

associated with poor long-term prognosis in patients with

al. Serum CA19-9 is a significant predictor among preoperative

parameters for early recurrence after resection of pancreatic