Objective:  To investigate the common risk factors involved in the pathogenesis of renal stones and diabetes mellitus in adults.

Method: The case-control study was carried out at the urology outpatient department and diabetic clinic of the Liaquat University of Medical and Health Sciences, Hyderabad, Pakistan, from January 2019 to January 2020, and comprised renal stone patients in group A, diabetes mellitus patients in group B and healthy controls in group C. Height and weight were determined for all subjects, followed by calculation of body mass index. Serum samples were analysed for creatinine, uric acid, total antioxidants, iron, malondialdehyde, superoxide dismutase, catalase, glutathione peroxidase, lactate dehydrogenase, xanthine oxidase, C-reactive protein, and nuclear factor kappa-light-chain-enhancer of activated B cells. Intra-group comparisons were done. Data was analysed using SPSS 22.

Renal stones (RS) and diabetes mellitus (DM) are the two main health concerns in many countries of the world. Both diseases are chronic health problems, causing suffering and financial burden for patients, families and nations. The global RS frequency in males aged 70 years ranges from approximately 4% in Britain to 1-5% in Asia, to 13% in North America and to 20% in Saudi Arabia.1-3 The peak age for RS presentation in Pakistan is 20-29 years.4 With an increase in the level of affluence, the overall RS prevalence has increased in both developed and developing countries. According to data available for the United States, 37% increase in RS cases in both genders was noted between 1976-80 and 1988-94.5  Moreover, nephrolithiasis is a recurrent disease with 14%, 35% and 52% chance of recurrence after 1, 5 and 10 years of the first episode, respectively.6  As such, RS is a serious health concern.7

Diabetes mellitus (DM) is a global chronic health issue caused when the pancreas fails to form sufficient insulin or when the insulin formed by the pancreas cannot be efficiently used to keep the normal blood glucose level.8  This ultimately leads to hyperglycaemia, which is an important DM feature.8

Chronic uncontrolled DM over time can lead to various complications, such as retinopathy, peripheral vascular disease, neuropathy and nephropathy.9

As per the International Diabetic Federation (IDF) report of 2017, 451 million people were suffering from DM worldwide, and by year 2045, this figure is estimated to touch 693 million.10  Until recently, DM was seen only in young and elderly people, but it is now frequently reported in children as well.11

In recent years, it has been noted that the prevalence of both RS and DM has increased in many countries. The cases of RS, obesity and DM have nearly doubled during the last 18 years.1,12 The reason for this simultaneous upsurge in the incidence of RS and DM remains obscure.

Oxidative stress (OS), caused when reactive oxygen species are produced in amounts greater than the antioxidant capacity to maintain the balance, has been suggested by many investigators as a cause for the formation of kidney stones13  and the development of DM.14

Since the association between RS and DM is not completely known, there are reports that suggest that these associations between the two do exist and might be bidirectional.15

Elucidation of the underlying links between RS and DM is essential for the development of new therapeutic options.16

The current study was planned to investigate causal link between the genesis of RS and the pathogenesis of DM.

The case-control study was carried out at the urology outpatient department and diabetic clinic of the Liaquat University of Medical and Health Sciences (LUMHS), Hyderabad, Pakistan, from January 2019 to January 2020. After approval from the Bioethical Committee of the University of Sindh, Jamshoro, Pakistan, the sample size calculated by using the formula n=Z2Pq/e2 was raised using random sampling technique, and, after taking informed consent, the subjects were divided into RS patients in group A, DM patients in group B and healthy controls in group C.

Patients included regardless of gender in groups A and B had serum creatinine <1.2mg/dl with either RS or DM. RS patients were enrolled from the urology outpatient department (OPD) prior to any intervention procedure, while DM patients were enrolled from the LUMHS diabetic clinic. Group C had healthy controls matched for age, gender and socioeconomic status having no personal or family history of RS or DM, and normal random blood sugar (RBS) level which was checked with a glucometer. Those excluded from all the groups were individuals on any dietary supplements, smokers and alcoholics as well as those with related disorders, such as hypercalcaemia, hyperoxaluria, gout, urinary tract infections and inflammatory diseases.

Body mass index (BMI) was calculated for every subject by dividing their weight in kg with square of height in cm. 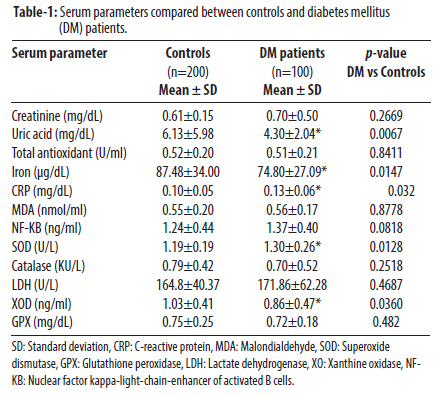 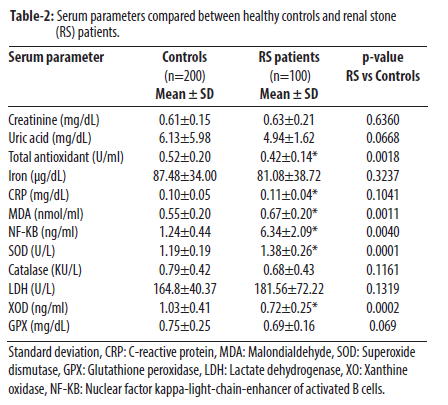 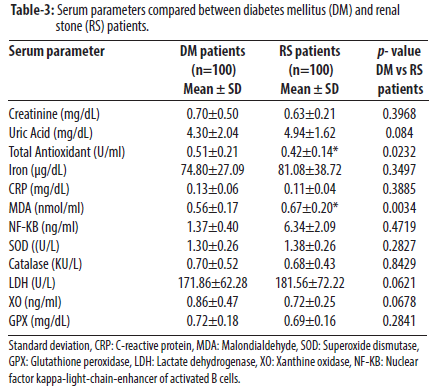 Likewise, comparison of serum parameters between DM and RS patients revealed that total antioxidants were significantly lower and MDA levels were higher in RS patients than in DM patients. This indicates that RS patients, as against DM patients, are at increased risk of mounting OS.

The results suggest that OS in the presence of low-grade inflammation may cause DM, while excessive OS, manifested by high levels of superoxide anion radical and low levels of total antioxidants, may lead to RS genesis. Since OS is commonly involved in the causation of both DM and RS disease, stress developed by one disease may promote the other.18  This might explain why RS patients are more prone to develop DM, while DM patients, as against the non-diabetics, are at an increased risk of developing RS.18,19

Literature review shows an association of obesity and DM with RS disease. Diet and lifestyle factors may be the common contributing factors for obesity, DM and RS disease.20

Lieske et al.12  in a population-based case-control study found that DM, obesity and hypertension (HTN) were associated with nephrolithiasis.

Literature suggests19  RS can cause HTN, myocardial infarction (MI), chronic renal disease and DM. Similarly, DM and HTN can lead to RS genesis. OS owing to any reason could be the main culprit involved in the pathogenesis of many renal and cardiovascular diseases.19

It is now well established that DM not only causes renal injury and inflammation, but also brings about variations in the urinary milieu which promotes precipitation of various stone-forming salts.10  In this connection, a link between DM and uric acid/calcium oxalate stone formation is strong since DM patients mostly develop dehydration, the main reason of renal stone formation, and have significantly higher excretion of oxalate,9  defective renal ammonia production, low urinary output of hydrogen (pH) and citrate.21-23 This might be the reason for higher rate of recurrence of renal stones in DM patients than in non- diabetics.

OS coupled with low-grade inflammation may cause DM, while excessive OS, manifested by increased amount of superoxide and decreased total antioxidants, may lead to RS development in adults. Since OS is commonly involved in the causation of both RS and DM in adults, OS developed by one disease may promote the other in certain circumstances.

Acknowledgment: We are grateful to the Higher Education Commission (HEC) of Pakistan for financial support.

Conflict of interest: One of the authors was member of the committee which signed the ethics review statement.

Source of Funding: The Higher Education Commission (HEC) of Pakistan.