Objective: To compare the level of burnout and emotional intelligence among junior and senior medical officers.

Conclusion: Junior medical officers were found to have significantly higher level of burnout and emotional intelligence compared to the seniors.

Emotional intelligence (EI) refers to the ability to identify and manage one’s own emotions, as well as those of the others.1 An assessment of EI in emergency medicine residents suggested that EI was higher in females (107) than the males (101).2  Comparative study on EI and quality of care practices by nurses and doctors towards their patients concluded that patients perceived their medical officers (MOs) as having more EI than the nurses.3  EI is a solid forecaster of a medical residents’ wellbeing. Computing EI can likely recognise individuals expected to flourish in the medical profession.4

Burnout is a state of mental exhaustion caused by the physician’s professional life, categorised by emotional exhaustion, depersonalisation and a reduced sense of achievement.5  Many MOs experience variable episodes of burnout throughout their careers, but few can cope without consequences. Prevalence of burnout among MOs ranges from nil to 80.5%.6  Burnout is generally high among clinicians worldwide, while the particular rates fluctuate by nation, medical field, practice background, gender and vocation phase. Burnout can have devastating consequences for the affected doctors, their colleagues, patients and the healthcare system.7

In Pakistan, a study favoured treating the cause, not the symptoms, of burnout.8  The levels of burnout were rather high among MOs in Taiwan. Age, gender, field, work hours, and work-loads were prominent features allied with burnout.9  Burnout and personality among primary care MOs showed that about 40% reported low levels of success, 35% described high levels of emotional exhaustion, and 20% conveyed high levels of depersonalisation connecting to high stages of burnout.10

The current study was planned to compare the level of burnout and EI among junior and senior MOs.

The cross-sectional observational study was conducted at the Department of Applied Psychology, Government College Women University, Faisalabad, Pakistan, from February to December 2017. After approval from the institutional ethics review committee, the sample size was calculated using G-Power 3.1.9.4 software11  with alpha value 0.05, effect size 0.8 on the basis of two-tail calculations with the desired statistical power of 0.99.

The sample was raised using stratified random sampling technique from different government and private hospitals of Faisalabad and Lahore after taking permission from respective hospital administrations. Those included were MOs of either gender aged 25-45 years with professional experience 1-10 years. Those outside the age and experience range were excluded. Those with work experience 1-2 years were defined as junior MOs (JMOs), and those with 3-10 as senior MOs (SMOs).

After taking informed consent from the participants, data was collected usingh a demographic sheet. EI was measured using the Schutte Self-report Emotional Intelligence Test (SSEIT) (Appendix-A),12  which has perception of emotion (POE), utilisation of emotions (UOE), managing others’ emotions (MOTE), and managing own emotions (MOE) subscales. It has 33 self-report items scored on a Likert scale ranging from 1 = strongly disagree to 5 = strongly agree. The total of the subscales generate the scale score, ranging 33-165, with higher scores indicating better EI). 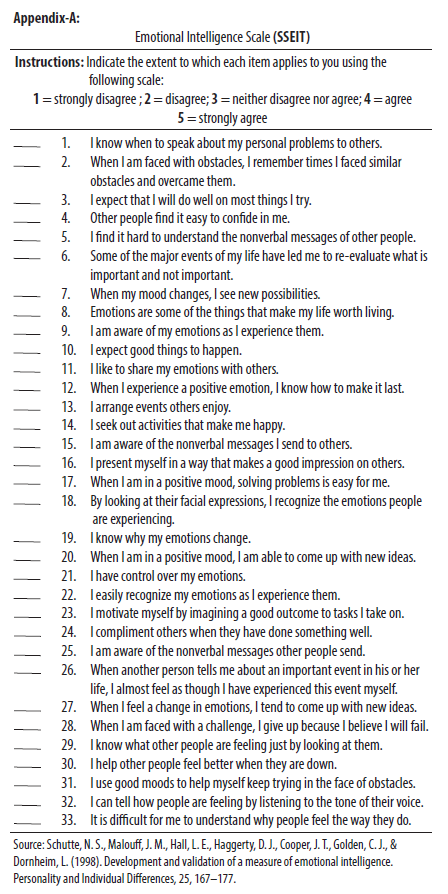 Burnout was measured using the Professional Quality of Life Scale (ProQOL)(Appendix-B),13  which has 10 items scored on 5-point Likert scale. Items 1, 2, 5, 6 and 10 are reverse-scored. A high score on the scale indicates higher level of burnout. 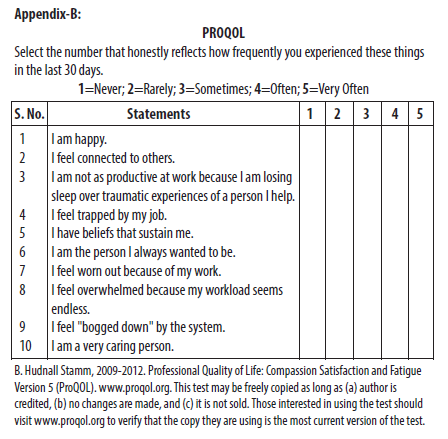 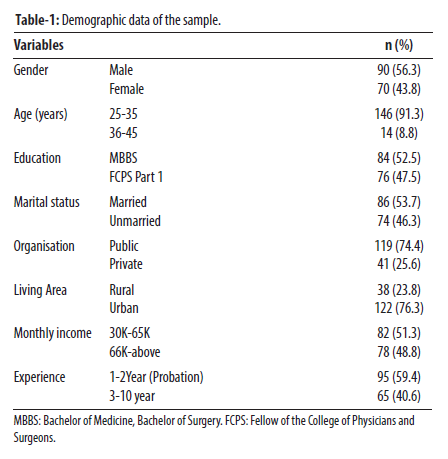 Chronbach’s alpha value for reliability and internal consistency of both the scales and the all the subscales as well as respective cut-off scores were calculated (Table 2). 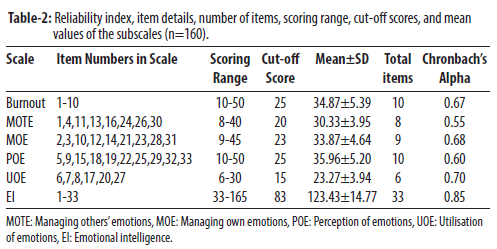 JMOs showed significantly higher levels of burnout and ERI compared to the SMOs (p<0.05), but the result was not significantly different in terms of subscales except MOE and UOE (Table 3). 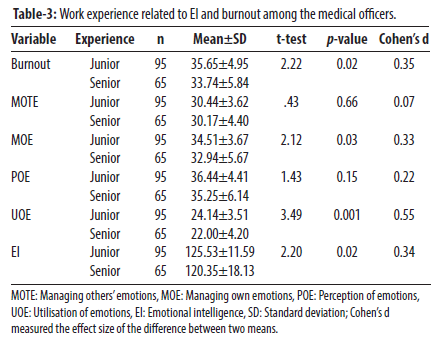 The current study found that JMOs experienced significantly higher level of burnout compared to the SMOs. In Egypt, most MOs had a moderate level of burnout and one-fourth had high-level burnout, and the multiple factors were identified, like age, gender, regularity of experience to work-related rigour, years of practice, work-load, command and management tasks, etc.14  In Pakistan, JMOs have multiple responsibilities compared to SMOs in some institutions. There are times when they have to perform additional or compensatory duties in place of their seniors, and such factors may cause high level of burnout. Similar findings were reported earlier.15  A study claimed that burnout was prevalent among postgraduate year 1 doctors.16  Another study on Irish and American JMOs declared that Irish doctors had higher burnout compared to the American practitioners (p=0.03), and argued that such levels were unjustifiable both for the JMOs and their patients.17  A study said the best forecaster for emotional exhaustion was neuroticism, while for individual achievement the forecasters were consciousness and EI.17

The other significant finding of the current study was that the JMOs had significantly higher level of EI, and a better ability with respect to MOE and UOE. Similar findings were reported in an earlier study.19  Another study concluded that the senior faculty had a higher total EI score compared to the junior residents and interns.20 The difference could be due to cultural and geographical factors. Furthermore, higher EI is a decent predictor of lesser stress, anxiety, and depression in resident MOs.21  Besides, EI can indirectly lessen tiredness somewhat through adjusting surface acting and natural acting approaches.22

JMOs experienced significantly higher level of burnout and EI compared to SMOs. Also, the JMOs had better ability to manage their own emotions, and to better utilise their emotions compared to the SMOs.

Acknowledgement: We are grateful to all the study participants.

Disclaimer: The text is based on an M.Phil thesis (studying multiple variables) conducted after approval from the Institutional ethics review committee. The current study analysed only two of those variables; emotional intelligence and burnout.

15.     Imo UO. Burnout and psychiatric morbidity among doctors in the UK: a systematic literature review of prevalence and associated factors. BJPsych Bull 2017; 41: 197-204.