Emergency management of avulsion injuries: from home to clinic: A multicentre cross-sectional survey among medical doctors and general public

The objective of this multi-centre study was to analyse the knowledge of parents as compared to medical-doctors regarding avulsion-injuries. A validated and piloted questionnaire was circulated among two equal groups (130 participants each) of medical-doctors and the general public. Data was analysed using SPSS version 19. A total of 131 (89%) participants had a university degree and 185 (71%) had a full time employment. One hundred and eighty-seven (72%) participants reported having no previous information regarding avulsion injuries, 195 (75%) considered their level of knowledge inadequate, and 63 (24%) had a previous history of dental trauma. A statistically significant number had information regarding avulsed permanent-teeth replantation (p=0.02) but not deciduous-teeth (p=0.26), whereas only 39 (15%) were aware of the right medium for tooth storage. Having seen or sustained an avulsion-injury and a higher qualification were statistically related to correct responses for some questions. A total of 106 (41%) of the participants wanted to be educated through written-material. In conclusion, the first-aid knowledge regarding tooth avulsion injuries in our population, irrespective of their level of academic education, is poor and needs supervised training.

Children between the ages of 8 and 12 years receive the most dento-alveolar injuries with an increased occurrence in boys.1 This remains one of the most distressing and painful events in a child’s life causing physical and psychological effects.2,3Various studies have reported the occurrence of dental injuries among different populations to be between 4.9% and 37%.3 Dental trauma may vary from minor chipping of enamel to dento-alveolar fractures.1 The permanent anterior teeth are mostly the victim of avulsion. They are not only important for aesthetic reasons but also aid in vocal and masticatory function along with the psychological health of an individual.4 An acceptable treatment of choice for the management of avulsion of permanent teeth involves prompt replantation followed by splinting with adjacent teeth and endodontic management, if required.5

Root resorption remains the most significant complication of avulsed teeth which is highly influenced by the prompt emergency care of the tooth and the actions taken on the site of injury.6 The reason for delayed replantation of the avulsed tooth is mostly the lack of knowledge among the general public.7 Dental injuries may occur at home, schools or parks. Subsequently, the survival of an avulsed tooth eventually depends on the parents’ emergency knowledge of the procedure.8 Accurate and fast emergency intervention provided by the lay people present at the site of the incident increases the chances of tooth survival.2 Lack of knowledge for instant emergency management at the site of mishap has been reported by many international studies.2,5,8

This descriptive cross-sectional, multi-centre survey was carried out from September 1, 2020, to December 31, 2020, after taking ethical approval from the concerned departments. Patients presenting to the dental out-patient departments of the Armed Forces Institute of Dentistry, Pakistan Institute of Medical Sciences, Shaheed Zulfiqar Ali Bhutto Medical University, and Military Hospital Rawalpindi for varied dental treatments were selected according to convenience sampling and divided into two equal groups—medical doctors and general public.

The questionnaire was prepared after thorough literature review1,2and was reviewed by two medical education experts for content validity. It was translated to Urdu and back to English by a translator completely blind to the study. This translation was validated by two sources and was piloted among 10 subjects before putting to test.9

The sample size was calculated by OpenEpi sample size calculator10 with a 6% margin of error, 95% confidence interval and a 50% frequency of outcome factor. Categorical data was expressed as frequency and percentages and comparisons were carried out using chi square statistics (correct vs incorrect responses) and multivariate regression analysis (relation between demographics and correct responses). All data was analysed using SPSS version 19 with p-value <0.05 being significant.

A total of 260 participants (130 in each group) were enrolled. Of these 185 (71%) participants were employed, with 231 (88.8%) qualified from universities. One hundred and eighty-seven (72%) participants reported no previous information regarding avulsion injuries of the oral cavity, while 195 (75%) from the total cohort of 260 considered their level of knowledge inadequate (Table-1). A statistically significant number of participants (0.02) knew that an avulsed permanent tooth can be replanted. Knowledge regarding seeking prompt consultation (≤0.001) and cleaning the tooth before storing (≤0.001) was also statistically significant (Table-2). However, only 39 (15%) of the participants were aware of the right medium in which to store and carry the tooth (Table-2). Having seen or sustained an avulsion injury and a higher qualification were the only variables that were statistically related to the frequency of correct responses for some of the questions asked (Table-3) which shows the importance of education and counselling in emergency room setting and dental clinics. 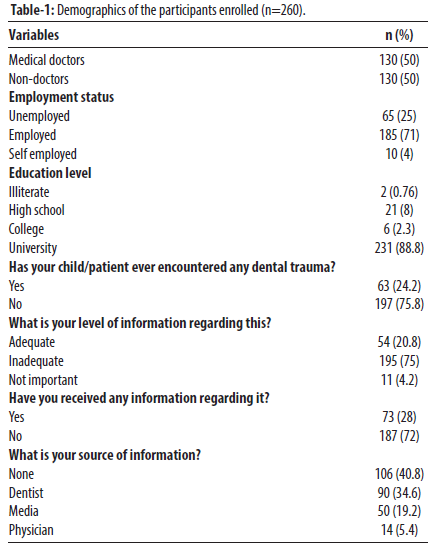 Factors determining the stabilisation of periodontal ligaments are extra oral dry time, storage medium and handling of the root. Other factors associated with good prognosis for the management of avulsed tooth are the apical maturity, immobilisation, endodontic treatment, and patient compliance.7

A study from India, taking in consideration 1,500 parents, revealed that only 31.8 % parents thought that an avulsed tooth can be reimplanted.2 A similar study conducted in Turkey noted that 91% of the parents interviewed had no knowledge regarding replantation of the avulsed teeth.3 Whereas our study revealed that 42.7% of the participants responded correctly to this question. Another study with similar objective reported that out of 36% subjects with previous dental trauma, only 6.5% patients could demonstrate adequate knowledge.2 Studies conducted in Egypt, Turkey, and Kuwait revealed that less than 25% of the study population had previous knowledge about avulsion.1,3,11Not surprisingly, 75% of our sample population reported inadequate awareness with 72% having never received any such information at dental clinics.

Sixty-four percent of our study population knew the importance of urgency to reach a dental clinic which was in accordance with a similar study,2 whereas the knowledge regarding handling an avulsed tooth while cleaning it was superior for our population as compared to other studies.3,12

During transportation, the storage medium must be of a suitable osmolality and pH. Milk and the patient’s saliva can also be used for this purpose.6,7Covering  the tooth in a plastic air tight wrapping can delay water evaporation for almost one hour.8 In a study involving Indian parents, 24.3%, 33% and 37.7% chose milk, plastic wrap, and tissue paper, respectively.2 Another research revealed inadequate knowledge of parents about the storage media.1 A study conducted on 289 Turkish parents showed similar results with 67% parents opting for tissue paper as a transport-modality.3 Our results weren’t contradictory.

Milk teeth once avulsed cannot be replanted due to their propensity of damaging the underlying growing permanent teeth. The response regarding this question was also disappointing just like the other results quoted in the literature.12 Our study revealed no effect of the level of education on the knowledge about first aid of dental avulsion injuries except a few questions. A similar study revealed comparable results having no difference of knowledge in parents with education,13 showing the lack of interest and neglect on the part of the public, dentists, and media. The only improvement in knowledge was seen with previous trauma or having received prior information revealing the importance of proper details of the first aid in such situations.

A thorough literature review revealed that only 46% of the medical doctors thought that an avulsed tooth can be reimplanted.13 Studies conducted in Sydney, India, and Wales on non-dentist doctors showed inadequate knowledge with 96.6% not getting any dental trauma education.14,15More than half of the patients with avulsion injuries are seen by medical doctors and trauma team in the ER with no dental surgeon on site. Their lack of knowledge leads to the delay in adequate treatment and loss of precious teeth causing social, emotional, and financial problems for the families. This study proves that the knowledge of a medical doctor is no better than a layman in this regard and there is a need to incorporate this facet in trauma response training.

The first aid knowledge regarding tooth avulsion injuries among our population irrespective of their level of academic education is poor. The action of parents or school teachers present at the site of such accidents and medical doctors attending them in the ER is fundamental in providing appropriate care to the injured child. This knowledge can be provided by educational programmes and trauma training for medical doctors, and posters and leaflets at public places along with media campaigns to educate the general public for managing avulsed permanent teeth.