Method: The randomised clinical trial was conducted at the Rehab Cure physiotherapy centre, Lahore, Pakistan, from January to September 2020, and comprised children of either gender aged 4-14 years, diagnosed with cerebral palsy, gross motor functional classification system level II or III, and no mental retardation. The subjects were randomised into conventional therapy group A and functional training group B. Intensity of exercises was gradually increased each week, starting from 10 reps to 20 reps. The subjects received treatment 3 times a week for 8 weeks, and each session lasted 45-60 min. Paediatric Balance Scale, Trunk Control Measurement Scale, Five Times Sit to Stand Test and Timed-Up-and-Go test were used at baseline and post-intervention. Data was analysed using SPSS 21.

Cerebral palsy (CP) is a non-progressive neurological condition, which occurs due to disturbance in brain development in the foetus or the infant. It results in abnormal motor skills, muscle tones, movements and postures. Along with activity limitation, it can also affect perception, communication, sensation, cognition and behaviour. Types of CP include ataxic, spastic, athetoid and mixed. Another classification is done according to degree of disability, like quadriplegic, triplegic, hemiplegic, diplegic, monoplegic or paraplegic.1

There can be several causes of CP, from idiopathic to some known reasons.6 CP risk factors include anaemia in mother, birth asphyxia and seizure.7

According to studies, functional-gait-training and intensive intervention for lower extremity had positive effects on gait improvement and balance control in CP children.9,10

The sample was raised using non-probability convenience sampling technique13 from among spastic hemiplegic CP children. Those included were children diagnosed with CP, aged 4-14 years, having Gross Motor Functional Classification System (GMFCS)14 level II or lll, having no mental retardation and with Modified-Ashworth-Scale (MAS)15 spasticity level grade 1-III. Those excluded were children who had had orthopaedic surgery or had used botulinum toxin, had severe visual defect, auditory problems and vestibular issues. Informed consent was taken from all the participants and those who refused to volunteer were excluded.

First of all, the subjects were randomied using the lottery method20 into conventional therapy group A and functional training group B.

Intragroup analysis of group A (Table-2) and group B 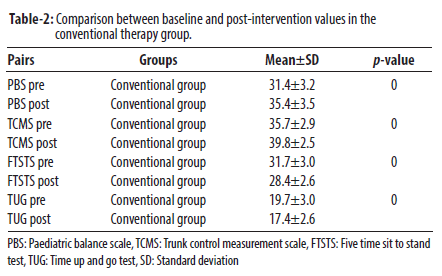 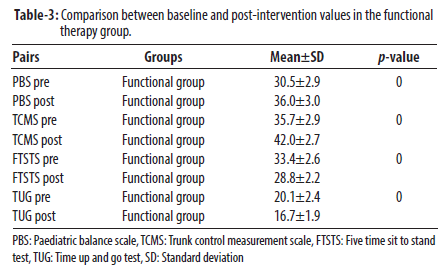 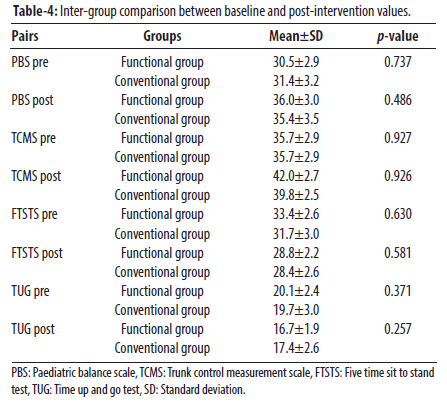 The findings of the current study were in line with literature,21 showing significant improvement in postural stability and functional mobility in CP children. The current study showed there was noteworthy difference between baseline and post-treatment values in both the groups (p=0.001).

Improvement in functional mobility noted in the current study is also in line with systematic-review and meta-analysis9 conducted to find out the effectiveness of functional-gait-training on mobility of adults and children with CP.

In terms of limitations, the current study was done at a single centre and comprised subjects having just one CP type. Multi-centre studies comprising subjects of multiple CP types are recommended.

Both functional training and conventional therapy significantly improved postural control and functional mobility in spastic CP children, but intergroup differences were not significant.

19.     Christopher A, Kraft E, Olenick H, Kiesling R, Doty A. The reliability and validity of the timed Up and Go as a clinical tool in individuals with and without disabilities across a lifespan: a systematic review: Disabil Rehabil 2021; 43: 1799-813.

Effects of glucosamine and chondroitin sulfate supplementation in addition to resistance exercise training and manual therapy in patients with knee osteoarthritis: A randomized controlled trial