Coronary heart disease (CHD) leads to stenosis of vascular cavity, decreased blood flow, and myocardial blood supply disorder.1,2 Inflammatory response can induce coronary atherosclerosis.3  Blood routine examination is an inexpensive, simple and routine test which can be carried out in primary medical institutions. Platelet-to-lymphocyte ratio (PLR) can be calculated according to the platelet count and lymphocytes count. PLR is an inflammatory marker to determine cardiovascular disease. Platelets have the functions of thrombosis and haemostasis. Heredity or acquired defects in quantity and/or function of platelets may be associated with haemorrhagic diseases, and increased platelet count is a key factor in thrombus disease. As natural and adaptive immune cells, lymphocytes are considered to be the main participant in atherosclerosis. Increased platelets level and decreased lymphocytes level are related to adverse cardiovascular events. Some studies have shown that elevated platelet count is an independent factor affecting the poor prognosis of myocardial infarction.4   Decrease of lymphocytes is related to the mortality of patients with coronary artery lesion (CAL).5   Previous studies mainly focused on the relationship between PLR and the type and prognosis of CHD.6  Gensini score was based on coronary angiography (CA) images and was scored according to the number, location, and degree of stenosis of the coronary artery lesions. Higher Gensini score indicates more serious CAL.Gensini score can be used to objectively evaluate CAL.7   It is worth mentioning that the Gensini score can only be achieved with invasive CA. So, finding a rapid, simple, efficient and non-invasive method to judge CAL in non-DM subjects with CHD is vital.

One study reported positive correlation between PLR and Gensini score in CHD cases.8

A few studies have observed the relationship between PLR and severity of CAL in CHD in non-diabetic (non-DM) subjects. Whether PLR can be used for non-invasive assessment of CHD and CAL in non-DM subjects is still unclear.

The aim of this study was to investigate the relationship between PLR and CAL in non-DM subjects with CHD.

This observational research was conducted at the Changyi people's Hospital, China, from January 2017 to August 2020. After approval of the Ethics Committee, a total of 237 non-DM patients with suspected CHD were selected as research subjects. The inclusion criteria were patients≥18 years old, those who were willing to undergo CA, those who gave informed consent to join the research, those with complete clinical data, and those who did not have diabetes. The exclusion criteria were patients with diabetes, primary renal disease, acute and chronic infection, tumour, hepatorenal insufficiency, acute myocardial infarction, cerebrovascular accident, severe valvular heart disease, haematological diseases, previous coronary intervention or coronary bypass grafting history, alcohol abuse, and those without CA.

The result of CA was checked in all the subjects. CHD was diagnosed based on CA results and WHO diagnostic criteria. CA was performed by Judkins selective CA.9

Patients with negative CA were non-CHD patients, and served as control group. Patients with CA showed that the degree of coronary artery stenosis ≥50% could be diagnosed with CHD, and they were included in the CHD group.

The data was entered in SPSS 25 for analysis. The normality of measurement data was tested by Kolmogorov-Smirnov test. Measurement data of normal distribution were expressed by mean±SD, and comparison between the two groups was performed by independent sample t-test. Counting data were expressed as n (%). Gensini score of non-normal distribution was expressed by median and quartile, Mann-Whitney U Test was used for Gensini scores difference. Risk factors of CHD were analysed by logistic multivariate model. Spearman rank correlation analysis was used for correlation test. The p<0.05 was significant. 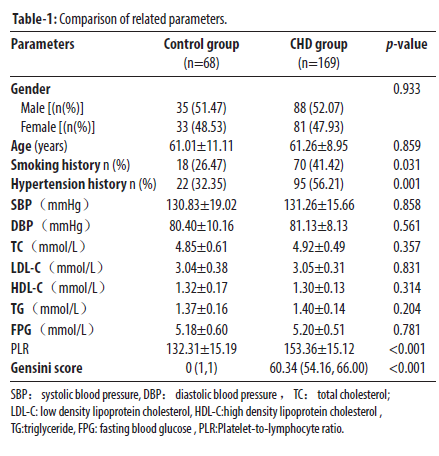 A significant positive correlation between PLR and Gensini score in CHD sufferers (r=0.510, p< 0.001) was noted on Spearman analysis.

PLR can be acquired simply and quickly from blood routine examination, and its level is related to CAL. PLR may provide certain reference values in judging CAL in non-DM sufferers with CHD. However, since the sample size of this study was small, prospective and multi-centre studies with large sample sizes are needed to further verify the conclusions of this study.

6.       Farouji I, Chan KH, Silm J. The utilisation of neutrophil-lymphocyte ratio and platelets-lymphocyte ratio as prognostic markers for coronary artery disease in person living with human immunodeficiency virus. Circulation 2020; 142: A16120.

Emergency management of avulsion injuries: from home to clinic: A multicentre cross-sectional survey among medical doctors and general public