Methods: The single-cohort, ambi-directional, observational study was conducted at the Tabba Heart Institute, Karachi, from January 2013 to July 2018, and comprised patients admitted consecutively for percutaneous atrial septal defect closure. Pre-closure trans-oesophageal echocardiogram was performed in all cases to ensure adequacy of defect margins necessary for device stability. Immediate procedure success and complications were determined by trans-oesophageal echocardiogram, while transthoracic echo was done on follow-up. Data was analysed using SPSS 21.

Atrial septal defect (ASD) is one of the most common congenital intra-cardiac shunts constituting 25-30% of all congenital cardiac defects in adults.1 Secundum ASD is the most prevalent form of ASD in adults as well as children, and is seen in about 10.3 of every 10,000 births.2 Although most ASDs are asymptomatic until adulthood, they can be diagnosed using transthoracic echocardiography (TTE).3

Closure is indicated in cases when patient is symptomatic or the defect is >05mm with right-sided chamber enlargement regardless of the presence or absence of symptoms.4 Delay in closure of the defect can result in right ventricular (RV) failure, pulmonary  arterial hypertension (PAH), thromboembolism and atrial arrhythmias.5,6 If the anatomy of ASD is appropriate for device closure, use of percutaneous catheter techniques using septal occluder devices is the preferred management strategy due to success rates of surgical closure with shorter hospital stay and better cosmetic results.7,8 Right heart catheterisation (RHC) to calculate Qp:Qs ratio and pulmonary vascular resistance (PVR) can be employed before attempting percutaneous closure to select appropriate patients, especially if there is concomitant severe PAH and possibility of shunt reversal on non-invasive testing.9

There are small-scale studies from low- and middle-income countries (LMICs) and local studies from Pakistan assessing safety of percutaneous device closure, but they mostly focussed on paediatric population, while adults may present differently where prolonged undetected left-to-right shunting of blood has already led to haemodynamic consequences of RV enlargement and PAH.10 Also, the studies lack data on follow-up assessing late complications and whether the RV size and PAH regressed or not.11-14

The current study was planned to assess the immediate outcome and complications of the Amplatzer septal occluder (ASO) device in adults, and to assess regression in RV size and PAH as well as the incidence of device embolization at follow-up.

The ambi-directional, observational study was conducted at Tabba Heart Institute (THI), Karachi, from January 2013 to July 2018, and comprised a single cohort of patients admitted consecutively for percutaneous ASD closure. THI is a 120-bed cardiac-only tertiary-care facility for adults with provisions of primary angioplasty and 24-hour cardiac surgery back-up. After approval from the institutional ethics review board, the sample was raised using non-probability sampling technique after reviewing medical records. These patients were followed-up prospectively to evaluate their outcomes. Eligibility criteria for percutaneous ASD closure was single secundum type ASD with four out of five adequate rims of at least 6mm in size; excluding retro-aortic rim which is commonly deficient and not a contraindication of percutaneous closure. Patients with defect size >40mm or presence of multiple congenital anomalies or significant cardiac valve abnormalities necessitating surgical intervention were excluded. Baseline demographics and presenting symptoms were recorded. Pre-procedure workup included TTE-based RV and right atrial (RA) measurement, degree of tricuspid regurgitation (TR), pulmonary artery systolic pressure (PASP) to asses PAH derived from TR jet, and inferior vena cava collapsibility-based RA pressure. Pre-ASD closure trans-oesophageal echocardiogram (TEE) was performed in all cases to ensure adequacy of margins of the defect necessary for device stability. Size of the defect measured on TEE was taken as final.

The occlusion device used was ASO (AGA Medical, Golden Valley, MN) as it is the only United States Food and Drug Administration (FDA) approved available device in our setting. ASO is a self-expanding double-disk made from nitinol wire mesh. The disks are joined together by a connecting mesh tube, which acts to stent the defect. This waist portion of the device also serves to self-centre the device during deployment. Polyester patches are sewn within the disks and central stent, which serve to occlude blood flow through the device. The device is screwed onto a delivery cable and is delivered through a preformed sheath sized between 6 and 12 French size, depending on the size of the device. ASD closures were performed under sedation, and general anaesthesia was used where necessary. The standard procedure described by the vendor was followed.15 The right femoral vein was accessed using a 7-8 French short sheath. Heparin was administered to achieve an activated clotting time >200 seconds at the time of device deployment. RHC was performed in selected cases to ensure the absence of high PVR. Device size was based on TEE reported defect size. A device about 4-6 mm larger than the TEE-based size was used. Device was deployed using guidewire over the left upper pulmonary vein. Position of the device was confirmed on fluoroscopy and TEE. Once the position of the device was confirmed, it was released. Fluoro-time and procedure duration were recorded.

The device was again checked 24 hours later using TTE for device-related complications. Electrocardiogram (ECG) was performed to exclude arrhythmia and discharge status was recorded. The status of use of aspirin was also documented.

Patients' medical records were reviewed for the presence of complications and assessment of symptoms on clinical follow-up after one year and data and findings on the last TTE were retrieved. The patients who had not been seen in the clinic were contacted through telephone and free review TTE was offered to assess late complications.

Data was analysed using SPSS 21. Mean and standard deviation and medians with interquartile range (IQR) were used according to the distribution of continuous variables. Frequencies and percentages were used for categorical variables. For comparison of means, paired sample t-teat was used. P<0.05 was considered statistically significant.

Sample size estimation was not performed due to scarcity of data available. 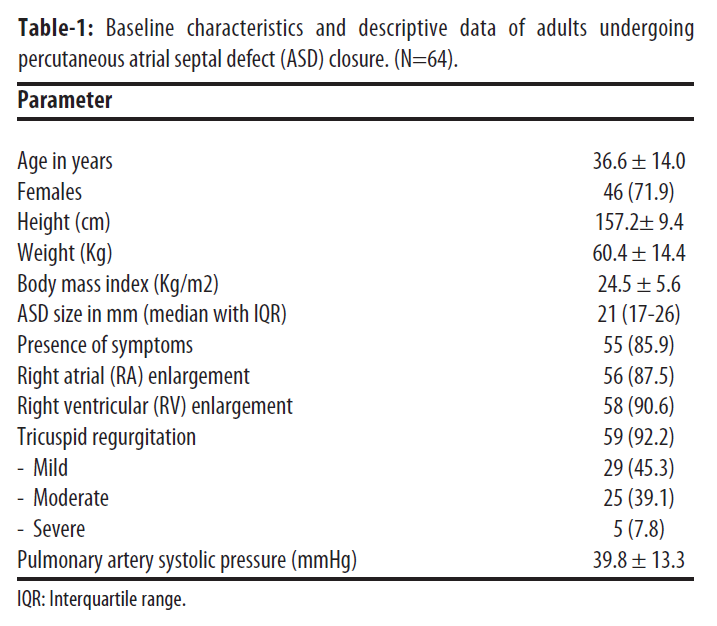 General anaesthesia was required in 4(6.2%) patients and the rest were managed under sedation. RHC with Qp:Qs calculation using Fick's Method was performed before closure in 29(45.3%) cases. Mean Qp:Qs ratio was 2.3± 0.7. Median device size was 26mm (IQR: 22-31). In 2(3.1%) patients, ASD device was deployed with balloon-assisted technique from contra-lateral femoral vein. The immediate success of the procedure was observed in 59(92.2%) patients and there were 5(7.8%) device embolization events in which devices were retrieved via percutaneous route and the patients were referred for surgical ASD repair after 3 attempts of device deployment. Mean procedure duration was 76.3±39.7 minutes, but after excluding the complicated cases, the mean duration was 72.1±34.8 minutes.

On pre-discharge TTE, 24 hours after device deployment, 4(6.2%) patients had small residual ASD; 1(1.56%) additional patient had device embolization with failed percutaneous device retrieval after which the patient was sent for surgical device retrieval and ASD repair. No bleeding complications or arrhythmia were noted in any subject. There were no deaths during hospitalisation among device closure or surgical repair patients. All of these patients were prescribed aspirin on discharge (Table-2). 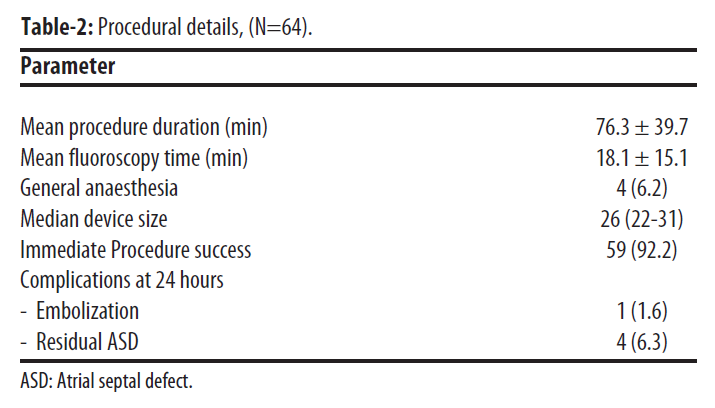 The current study is the first in adult patients with ASD in the country. It demonstrated that secundum ASD was more common in young to middle-aged females. ASD closure could be successfully performed in majority of patients without significant morbidity. On intermediate-term follow-up, all patients reported symptomatic improvement and around 90% of the patients showed regression in size of RV and significant improvement in PAH. There were no late erosion or device displacements seen.

Percutaneous ASD closure has become standard procedure for more than a decade.7 Compared to surgery, a non-randomised trial showed that percutaneous device closure had similar one-year outcomes in terms of no need for re-intervention and absence of complications, but significantly reduced hospital stay.16 Similar findings were reported in a local study on paediatric population.17 Also, long-term favourable follow-up has been reported by multiple studies in terms of absence of significant complications and symptomatic improvement.18

We used ASO, which is an FDA-approved and most utilised device.19 Immediate procedure success was somewhat comparable to reported studies.20,21 The most common immediate complication reported in the current study was device embolization in 6(9.4%) patients. This incidence is very high compared to reported rate of 0.5% in a registry of 3824 ASO implantations,22 while in NCDR IMACT (The National Cardiovascular Data Registry (NCDR), Improving Paediatric and Adult Congenital Treatment) registry, 1.5% devices embolized.19 In an Indian study, device embolization rate was around 4%.23 Importantly, in the current study, 4 out of 6 embolizations occurred in large ASDs (>30mm) and, except for one, all of the devices could be retrieved via percutaneous route. All devices were 4mm larger than the reported size of ASD on pre-procedure TEE. This advocates that device sizing and assessment of adequate rims based on TEE measurements may underestimate defect size, especially if the defect is large or non-circular in shape. Balloon sizing or three-dimensional (3D) echocardiography are valid alternative for accurate sizing of ASD, especially useful for larger or non-circular ASDs.24 Five out of six embolizations occurred during the initial study period, from 2013 to 2015, which suggests that operators' experience and learning curve have an important role in successful device deployment.22

Most patients in the current study had moderate to large defects. All patients had some degree of PAH present at the time of ASD diagnosis and >90% had RV enlargement which denoted haemodynamic significance of the shunt. If left untreated, survival rates are reduced in patients with haemodynamically significant ASD compared to normal individuals. Successful closure of ASD results in positive RV remodelling and reduction in pulmonary pressures within the first 12 months post-closure.25-27 The current study also demonstrated significant improvement in PASP and RV size at 20 months post-procedure.

The major limitations of the current study include its single-centre registry of a small sample size and the retrospectively collected data on procedures. Patients' follow-up was limited and post-procedure TTE follow-up was not available in more than one-third of the cases.

Percutaneous device closure of ASD can be performed successfully with fewer complications in adults in experienced hands. Timely closure results in better RV remodelling and improvements in pulmonary hypertension at intermediate-term follow-up.

Social media and body dysmorphic disorder : Is there any link?

Impact of paternal alcohol consumption on foetus and adolescence