Clinical parameters and treatment outcome in patients of acromegaly: A retrospective analysis of 51 patients

The aim of the study was to analyze the pattern of clinical presentation and management outcome in patients of acromegaly. It is a cross-sectional study based on the clinical records of 51 patients of Acromegaly. All the recorded clinical data was analyzed to see the pattern of clinical presentation and management outcome. IBM SPSS statistics version 22 was used for statistical analysis. The median age was 32 years. Twenty-seven patients underwent surgery and 6 (22.2%) achieved remission. With pharmacological management, 35.8% patients achieved control of the disease with Octreotide LAR and 7.1% with cabergoline. Eighteen patients were treated with External Beam Radiation (EBR) and Stereotactic Radiosurgery (SRS). Remission rate has been 88.9% with SRS and 33.3% with EBR. The study shows higher prevalence of Growth Hormone (GH) secreting tumour in younger people and men. Remission rate was highest in patients treated with radiotherapy after partial response to TSS.

Acromegaly is caused by the excess GH production by a pituitary tumour. Main manifestations are musculoskeletal features, cardiovascular disorder, hyperglycaemia, sleep apnoea, entrapment neuropathies, osteoarthritic changes etc. When this excessive GH production occurs before the closure of epiphysis, there is abnormal linear growth and gigantism results.1

Acromegaly is a rare disorder with an incidence of about 3 cases per million per year and the prevalence is about 60 per million. It is a slowly progressing disorder and the clinical features may go unnoticed for many years, often resulting in a delay of 7-10 years after the onset of symptoms.2 The morbidity and mortality associated with acromegaly is directly related to the degree of hypersecretion of GH by the tumour. Morbidity and mortality can be greatly reduced with early diagnosis and successful management.3 Treatment options for acromegaly include surgery, medical therapy, and radiotherapy, with an aim to reduce or normalize GH burden, improve clinical features and reduce or remove the tumour mass.

We are presenting an analysis of clinical data of 51 patients of Acromegaly and gigantism, with a discussion on management decisions in a resource limited environment and clinical outcome.

This is a cross-sectional study based on the clinical records of 51 patients of Acromegaly and Gigantism who presented in the Endocrine Clinics of Military hospital Rawalpindi from Jan 2015 to Dec 2017 and Hearts International Hospital Rawalpindi from Jan 2018 to Jan 2020.  All the recorded clinical data was collected in June/July 2020 and analyzed to see the pattern of clinical presentation and management outcome. Obstructive sleep apnoea was diagnosed on the basis of clinical history suggesting excessive snoring and daytime lethargy and sleepiness. Biochemical diagnosis was made on the basis of raised basal serum GH levels, serum IGF-1 level and failure of GH to suppress below 1.0 mU/l with 75 g oral glucose load. Trans-sphenoidal surgery was the first line of treatment. Patients showing partial response to the surgery and those in which surgery was not done due to personal preference or some other reason, radiotherapy or medical treatment was offered. Radiotherapy was done either by fractionated External Beam Radiation (EBR) or Stereotactic Radiosurgery (SRS) by gamma knife or cyber knife. Medical treatments employed were Octreotide LAR, Cabergoline and bromocriptine. The patient was considered to achieve remission when serum IGF-1 was within normal range and serum GH level was below 1.0 µg/l (2.5 mU/l)3,8 and partially cured when the levels of GH and IGF-1 had decreased but still above the normal range. Disease was considered controlled, when serum IGF-1 was within normal range with regular pharmacological management. Statistical analysis had been done using IBM SPSS statistics software version 22. The descriptive analysis of various variables had been presented for continuous variables as Mean (standard deviation) or median (inter-quartile range) and for categorical variables as numbers (percentages). The statistical tests used were independent sample T test and Chi square.

Out of 51, thirty-one were male and twenty were female patients. The median age was 32 years and average duration of symptoms was 3.5 ± 2.6 years. Descriptive analysis of important clinical variables and their differences in both genders is shown in Table-1. 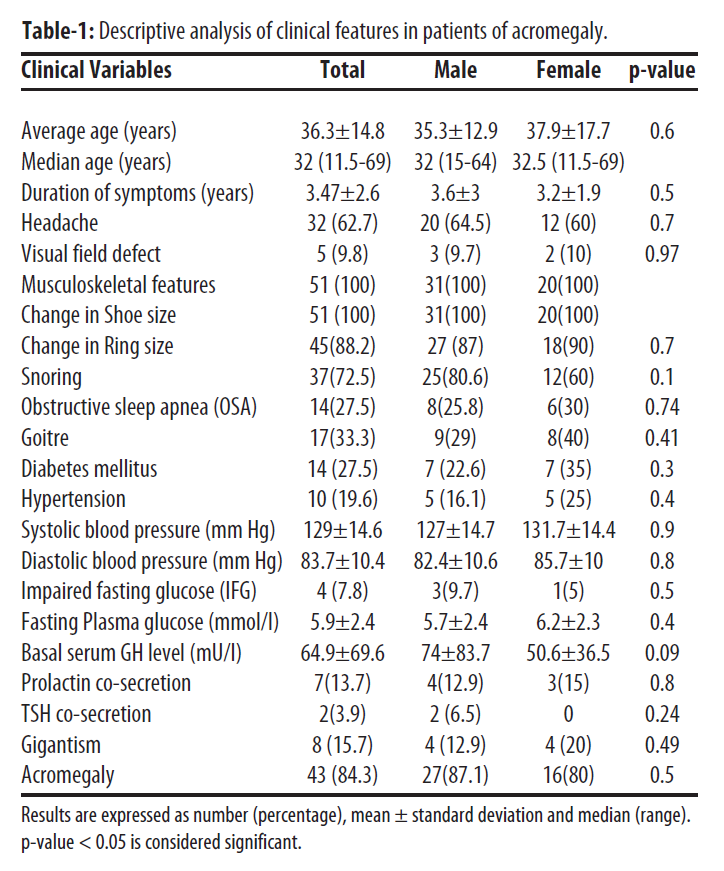 Generally, Acromegaly affects both genders equally and the average age at diagnosis ranges from 40 to 50 years. Gigantism accounts for upto 5% of cases.4 Our cohort has male preponderance. Average age at presentation was 36.3 ± 14.8 years and average duration of symptoms was 3.47 ± 2.6 years, with no significant difference between two sexes. Liege Acromegaly Survey (LAS) database suggested the median age of diagnosis was 45.2 years and the median delay in diagnosis, in this database was 10 years for females and 8 years for males.5 More recent data suggests that this delay of acromegaly diagnosis can be now reduced to 3-6 years6 as we have seen in our study.

OSA in 27.5 % cases, was more common with advanced age and longer duration of symptoms. LAS database5 found sleep apnoea syndrome in 25.5% patients which they considered an underestimate. With strict polysomnography, Attal and Chanson found the rate of OSA to be 70%.7 Hypertension and plasma glucose abnormality were also positively correlated with age and duration of symptoms.

Remission rate after surgery was not very good in our patients because most of the patients who opted for surgery had macroadenomas with suprasellar extension. TSS has better results in patients of acromegaly, with microadenoma or intrasellar macroadenoma.9 With pharmacological management, 45.4% patients on Octreotide LAR and 5.8% on cabergoline achieved normalization of serum IGF-1 levels. Poor compliance was a major problem, due to very high cost of octreotide LAR and availability issues with cabergoline. So, for achieving remission, after partial response to surgery, we relied on radiotherapy. With SRS, 8 out of 9 patients had achieved remission with a median follow up of about 2.5 years. In a recent analysis of 352 patients from the German Acromegaly Registry, who received Fractionated Radiotherapy (FRT) or Stereotactic Radiosurgery (SRS), 75% of patients are in remission or controlled after 10 years.10

In our cohort, the age at presentation was younger and duration of symptoms was short as compared to previous studies. After partial response to trans-sphenoidal surgery, we found radiotherapy especially SRS to be more effective in achieving normalization of GH/IGF-1 than pharmacotherapy, mainly because of inadequate use of somatostatin analogues due to their high cost, highlighting the importance of radiotherapy in achieving cure in acromegaly patients, in a resource limited environment.

Funding Sources: None to declare.