Methods: Data of patients who underwent PCNL from June 2004 to August 2014 at the Kidney Centre Karachi, Pakistan were reviewed. Patients above 14 years of age with Supracostal Access were included in study. PCNL was performed in prone position with 'Bull's Eye Technique'. Nephrostomy was placed after completion of the procedure in most cases.

The overall complication rate was 4.7% with 3 (4.3%) patients requiring Tube Thoracostomy and 1 (1.4%) each for angioembolisation, pulmonary oedema/ Ventilation and ICU admission due to urosepsis and renal dysfunction.

Conclusion: Supracostal PCNL is a safe and effective approach for multiple stones in pelvicalyceal system. Due anatomic consideration can decrease the complication rate. In complex stones with huge burden, an elaborate and thorough counseling regarding delayed clearance and need for auxiliary procedures including secondary PCNL is mandatory.

Urinary stone disease represents an important and common problem in every day urologic practice. Urolithiasis also constitutes 40-50% of urological workload in Asian population with prevalence of 12% in Pakistan.1,2 First reported Percutaneous nephrolithotomy (PCNL) by Johansson and Fernstrom in 1976 has revolutionized the renal stone management.3 Now PCNL is an established 'standard of care' for larger (>20 mm) renal stones.4 Standard PCNL comprises of subcostal access with the patient in prone position. PCNL over a period of around half a century of evolution has met many deviations.5 This is from a decade later of first reported PCNL, when Wikham et. al. reportedly proved one-stage PCNL as equally safe, effective and economic as against traditional 'Two Stage'.6 Later, patients' various skeletal deformities and medical conditions caused deviations from standard 'Prone' to 'Supine' and 'Lateral' positions.5 Further with technological advancement in optics, resolution with HD Camera and Miniaturisation of scope, better stone clearance has been achieved with even lesser complication rates.7-9 Supracostal approach is one such deviation from standard 'Subcostal' one, now widely accepted and universally practiced.10-12 We share our experience and learning through audit of cases of Supracostal PCNL and literature review with emphasis on safety principles through anatomic approach.

We reviewed our data of patients who underwent PCNL from June 2004 to August 2014 at The Kidney Centre Karachi, Pakistan. All patients above 14 years of age both males and females were included. Patients with Supracostal Approach were identified and included in the study (Table-1).

All patients underwent retrograde urography in dorsal lithotomy position and PCNL in Prone position with 'Bull's Eye Technique' for puncture. Before paint, site of interest was marked to identify XIIth Rib, Lateral border of Erector Spinae Muscles and Iliac Crest (Figure-3). And the site was punctured lateral to the lateral border Erector Spinae Muscles for supracostal access, reducing the risk for pleural injury. For puncturing, the area close to upper border of lower rib was selected. Likewise forniceal rather than Infundibular region was targeted under Flouroscopy. For high located kidneys, Renal Descensus technique was adapted by hyperinflating lungs and holding breath for a short instance (Figure-1). 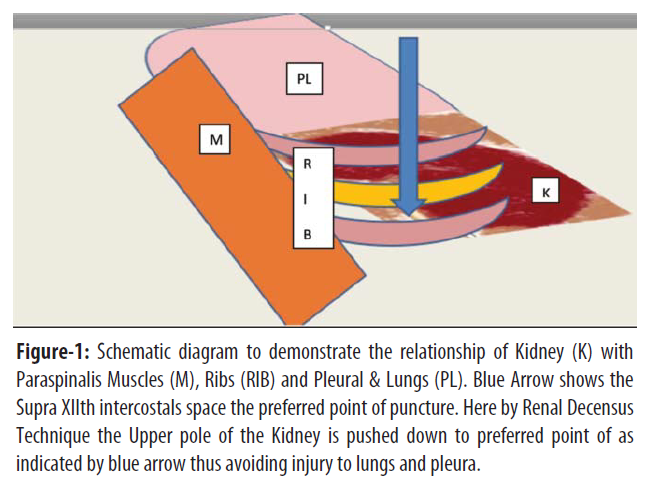 To protect from barotrauma with long and sustained pressure, the lungs were inflated at submaximal level and Puncture needle was positioned at the proposed puncture point to acquire bull's eye on fluoroscopy before Hyperinflating at final puncture under flouroscopy. We used a Spinal Needle instead of long purpose made Puncture Needles for Upper Pole Punctures in general and Supracostal in particular which made the shortest possible route for access from skin to the Pelvicalyceal system (Figure-2). 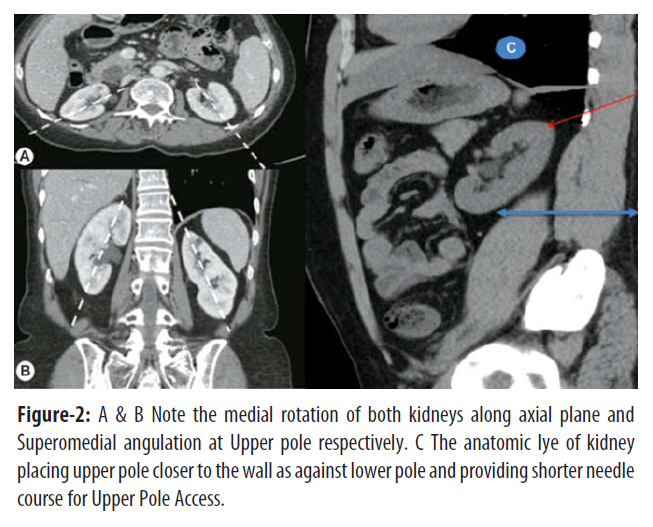 This helps to prevents perforation injuries by the shorter spinal needle which can occur by past pointing. Nephrostomy tube was placed in most cases at the end of procedure.

X-ray KUB / Ultrasound KUB was done on 2nd Postoperative day to confirm clearance and/or for residual stones. Preoperative Stone Burden was measured along the longest Dimension and sum for multiple stones. Complete stone Clearance post operatively was defined as no stone or less than 4 mm size. Complications were reported as per Modified Clavien Grading (Table-2).13

The overall complication rate was 4.7% (Table-3). Two (2.7%) patients needed additional antibiotics and blood transfusion for bleeding and postoperative infections. Three (4.3%) patients underwent Tube Thoracostomy and 02 (2.7) % patients had Persisting Leakage from PCNL puncture site that settled with DJ Stent insertion. One (1.4%) patient had stone migration to ureter and was managed by ureterorenoscopy. One (1.4%) patient each required Angioembolisation for secondary haemorrhage (Pseudoaneurysm), intubation/ventilation for pulmonary oedema and ICU admission for urosepsis and renal dysfunction (Table-2).

The primary goal in the management of stone disease is to achieve complete stone clearance with minimum or no morbidity to the patient. Open surgery for renal stones is now almost nonexistent. The introduction of Extracorporeal Shock Wave Lithotripsy (ESWL) and advances in endourology has allowed most patients with renal stones to be treated with minimal or no invasion at all4,14,15 With the increasing skills, training opportunities and trainers for PCNL, it has become one of the commonly performed procedures in everyday urological practice. Many citations have shown the efficacy of PCNL over ESWL and found PCNL as safe and successful modality for renal stones of 2 cm and above, patients with multiple or larger stones, stone in calyceal diverticulae or larger stones in lower pole and morbidly obese patients.4,16

Supracostal puncture promises as an ideal puncture to access the whole calyceal system of kidney and upper ureteric stone via upper pole.20 Due to the proximity of pleura, there is a higher chance of thoracic complications with Supracostal access and many surgeons are therefore reluctant. However with increasing expertise, understanding and knowledge of regional anatomy, thoracic complications are reduced from 12% down to 1.4%.11,21 In this context, El Karamany T et al has described their technique for Supracostal puncture with surface marking to identify Mid Scapular Line, XIth & XIIth ribs and Paraspinal line (Figure-3).22 The authors emphasized targeting puncture close to midscapular line that overlies lateral half of XIIth rib and reduces pleural injury. In our series, we marked site of interest identifying XIIth rib, Lateral border of Erector Spinae Muscles and Iliac Crest (Figure-3A and B). This not only reduces the risk of Pleural injury but also give a wider window for puncture as the point where the lateral border of Erector Spinae Muscles overlies XIIth rib. This point marks the junction of medial and lateral segment of the rib and is further medial to mid scapular line. Here the pleura is reflected away from this point to upper ribs.23,24

Similarly, the extensive work on Endovascular renal anatomy by Sampio.25 has shown that forniceal punctures may lead to only venous injury with no risk of major postoperative bleeding. In contrary, infundibular punctures are attended with major vascular (Segmental arteries) injuries irrespective of upper, middle or lower systems.25 Likewise injury to subcostal vessels and nerves can be avoided by punctures along upper border of lower ribs than lower border of upper ribs.26 Such injuries may lead to significant bleeding from puncture wounds and even haemothorax requiring Tube Thoracostomy.10

Munver et al reported similar number (72) of patients as our series undergoing PCNL through supra 12th access with 6.24 cm as mean size of stone .Eighty eight percent (88%) in their series had more than one stone and achieved stone clearance in 64.5 % and with a complication rate of 16.3% which included 1.4% of intrathoracic complications.11 We have comparable data in terms of sample size, multiplicity and almost similar results for Primary PCNL, achieving improved clearance of 91.4% with auxiliary procedures (ESWL/Secondary PCNL) and an acceptable complication rate of 4.7% as observed in other citations (Tables-2 and 3).10-12

Henceforth, due respect to anatomic landmarks and imaginative orientation to regional anatomy including endovascular anatomy helps decreasing the complication rate and maximising primary goals of stone clearance even with larger stone burdens.11,18,21,24 However we concede to the statement by Desai et al "Achieving a complete stone clearance continued to be a challenging task despite multiple punctures and multiple tracts".27

l Supracostal PCNL is a safe and effective approach for pelvicalyceal system having multiple stones.

l Due anatomic consideration can decrease the complication rate.

l Overall stone free rate can be improved with Flexible Nephroscopy and ESWL.

l In complex stones, counseling regarding delayed clearance and need for auxiliary procedures is mandatory

Conflict of Interest: None

10.     Gupta R, Kumar A, Kapoor R, Srivastava A, Mandhani A .Prospective Evaluation of safety and efficacy of the Supracostal approach for Percutaneous Nephrolithotomy. BJU Int 2001; 90: 809-13.

Surgical fixation of metastatic spine fractures: 6-months experience at a cancer hospital from a developing country — an audit