Objective: To determine the frequency of breakthrough seizures among paediatric patients suffering from epilepsy, and factors related to the precipitation of these seizures.

Method: The cross-sectional study was conducted from July 1, 2018, to July 1, 2020, at the Combined Military Hospital Lahore and the Military Hospital, Rawalpindi, Pakistan, and comprised children of either gender aged 2-12 years diagnosed with any type of epilepsy presenting at the children outpatient department. Diagnosis of epilepsy was established by either a consultant adult neurophysician or a consultant paediatrician. The presence of breakthrough seizures was assessed by obtaining detailed history from the patient and the primary caregiver. Socio-demographic profile, duration of epilepsy and poly-pharmacy were noted. Data was analysed using SPSS 23.

Conclusion: The incidence of breakthrough seizures in epileptic children was high despite the anticonvulsant agents that were previously effective in controlling seizures.

Epilepsy is one of the commonly diagnosed and unaddressed disorders in neurology practice.1 It affects all age groups in one form or another.2 Various sociocultural myths also affect treatment-seeking behaviours of patients. It has been added in the recent mental health gap action programme (mhGap) for developing countries where there is a large gap between demand and supply of neuropsychiatric disorders.3,4 A huge proportion of patients suffering from this stigmatised disorder is constituted by children whose care demands further specialised understanding of this illness and its treatment options.5 Paediatric neurology is an underdeveloped specialty in Pakistan, with less than half-a-dozen qualified people in the whole country. Most of the times, paediatric patients with epilepsy report to general paediatricians or adult neurologists who have limited expertise in this patient subset. A recent epidemiological study revealed that around 20% of patients with epilepsy are aged <12 years in the country which is a huge number.6

The current study was planned to determine the frequency of breakthrough seizures among the paediatric patients suffering from epilepsy, and factors related to the precipitation of these seizures.

The cross-sectional study was conducted from July 1, 2018, to July 1, 2020, at the Combined Military Hospital (CMH), Lahore, and the Military Hospital (MH), Rawalpindi, Pakistan. After approval from the institutional ethics review committee of MH, the sample size was estimated using the standard formula for population proportion (n = (z)2 p (1 - p) / d2) with 5% margin of error, 95% confidence level, 20-70% prevalence of breakthrough seizures.7-9 The sample was raised using non-probability consecutive sampling technique from among children of either gender aged 2-12 years diagnosed with any type of epilepsy presenting at the children outpatient department (OPD) whose parents furnished written informed consent. Screening was performed on all the diagnosed cases of any type of epilepsy, diagnosed by a consultant paediatrician or adult neurologist based on the International League Against Epilepsy diagnostic criteria of 2010.15,16 Patients whose parents did not give consent were excluded, and so were those with other chronic physical or psychiatric illnesses, children with cerebral hypoxia or learning disability, children who themselves or their parents were unable to give an accurate history of the events in the recent past, and patients with suspicion of pseudo-seizures.

Data was collected using a predesigned structured proforma. Detailed history-taking was done to pick confounding factors, like the presence of some chronic physical illness or learning disability or non-epileptic fits. Detailed account from children, if they were able to do so, as well as primary caregivers were taken by the consultant paediatrician or consultant adult neurologist in order to confirm the presence of a true breakthrough seizure in the patient in the preceding 6 months. Breakthrough seizure was defined as seizures that occur in a person who had previously good consistent control of epilepsy documented in the medical records and then got another seizure.8 Socio-demographic profile of the patients included age, gender, education of caregiver and family income, while disease characteristics, like duration of epilepsy and poly-pharmacy, were also noted. Education of the caregiver was classified as matriculate and above, or below matriculate. Ploy-pharmacy was defined as use of more than one drug for epilepsy. Duration of epilepsy was classified under the categories of <2 years or >2 years. Family income was classified as earning or income more than the monthly expenditure, and earning or income less than the monthly expenditure.

Data was analysed using SPSS 23. Frequencies and percentages for gender and patients with and without the presence of breakthrough seizures were calculated. Chi-square test and binary logistic regression analysis were used to examine the association of age, gender, duration of epilepsy, poly-pharmacy, education of caregiver and family income with the presence of breakthrough seizures. P<0.05 was considered statistically significant.

Children with young age, with low family income, and those in need of poly-pharmacy showed significantly higher odds for breakthrough seizures (p<0.05) (Table-2). 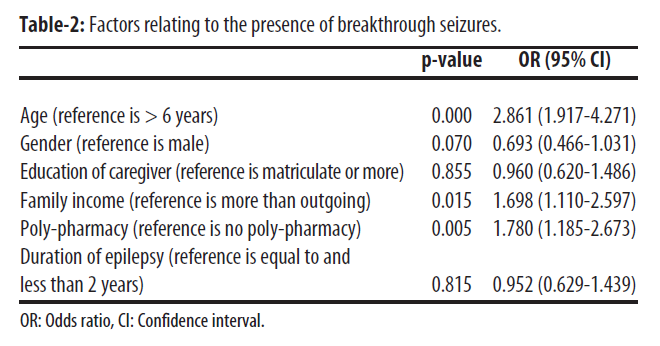 Epilepsy in children can present in number of ways, including behavioural, memory-related or other neuropsychiatric manifestations.17,18 Once a child has been diagnosed with epilepsy and put on AEDs, parents also need to be informed about various lifestyle modifications and need for strict compliance with medications. Sometimes drug levels in the serum are also done in order to achieve the goal.19 Breakthrough seizures may have many short-term and long-term adversities for the child as well as the family.20 Even sudden unexplained death in epileptic patients has been associated with poorly treated or undertreated epileptics.21 Therefore, adequate knowledge regarding the nature and risk factors associated with the precipitation of breakthrough seizures is necessary in a country like Pakistan where a huge gap already exists between the number of patients who are ill and the number of patients who seek treatment from medical experts. Despite being engaged with a tertiary care facility, around half of the epileptic children in the current study showed the precipitation of breakthrough seizures in the preceding six months. This is a real huge number compared to the studies done in other parts of the world.8,10 This may reflect the presence of overburdened physicians giving incomplete information regarding the nature and treatment of illness and focussing less on the matter of compliance, especially at first presentation. Qualitative studies in this regard among both parents and the treating physicians may show interesting results and exact causes of this phenomenon in the population.

Children aged <6 years had more chances of having breakthrough seizures than the grown up children in the current analysis. Similar results have been produced in the past.22 Younger children may be more prone to infections and other changes in the environment compared to the children. Correct dosage and way of giving the drug by the caregiver may pose additional issues among the younger children. More research is required in this regard.

More breakthrough seizures were observed among the children who belonged to the families with income less than the expenditure. This finding has also been observed in other studies.23 Income of the family can have a direct as well as indirect impact on the control of illness. Though first-generation AEDs are not very expensive and most of the public-sector hospitals provide them free of cost, regular follow-ups and coming to the hospital from far flung villages are considered a burden on the pocket, and usually visit to a health facility is after some major event, like precipitation of a seizure.

Poly-pharmacy also had a strong impact on the precipitation of seizures. Results in literature are in accordance with these results.24 Use of multiple drugs for the control of seizures should be associated with better results, but the opposite findings show that either the disease is really resistant, or compliance has been compromised. Pharmacokinetics and drug interactions may also be the culprit for this association among the epileptic children.

The current study has its limitations. Diagnosis of the presence of breakthrough seizures was entirely clinical and based upon the recall of the patients and the caregivers. Electroencephalography was not done at the time of breakthrough seizure or soon after that as per protocol. Compliance and levels of drugs used for the control of epilepsy were not checked in the patients due to high cost, so it cannot be hypothesised that the breakthrough seizures occurred despite adequate intake of the prescribed AED. Children from only two hospitals were included and comprised from both neurology and paediatric departments. As such, the findings are not generalisable. Further studies with large sample size and sampling from various hospitals are recommended.

Control of epilepsy was found to be poor as large percentage of the epileptic children reported the presence of breakthrough seizures. Special attention should be paid to patients of younger age, with low family income and those requiring more than one medication to control the seizures.

16.     Proposal for revised classification of epilepsies and epileptic syndromes. Commission on Classification and Terminology of the International League Against Epilepsy. Epilepsia 1989; 30: 389-99.