Objective: To identify the effect of cognitive behaviour hypnotherapy on nonsuicidal self-injury condition.

Methods: The quasi-experimental study was conducted from May 2019 to April 2020 in Islamabad and Rawalpindi, Pakistan, and comprised students aged 18-25 years at various universities and colleges in the twin cities. The participants were screened using deliberate self-harm inventory for >2 events without suicidal intention in line with the Diagnostic and Statistical Manual of Mental Disorders 5th edition. They were then divided into two intervention and control groups. Over the following three months, the intervention group received cognitive behaviour hypnotherapy, while the control group did not receive any treatment. The groups were assessed post-intervention. The final phase comprised follow-up assessment of the condition. Data was analysed using SPSS 25.

Conclusion: Cognitive behaviour hypnotherapy was found to be effective in treating the nonsuicidal self-injury condition.

Nonsuicidal self-injury (NSSI) has been extensively studied and researched. The American Psychiatric Association proposed the Diagnostic and Statistical Manual of Mental Disorders fifth edition (DSM-5)1 as a condition that needs further study. NSSI had several different definitions; in DSM-5, NSSI is defined as harming one's self physically, without suicidal intention.2

Moreover, the risk involved in NSSI is the increased likelihood of suicidal attempts, and, in most cases, the cycle becomes repetitive.6 The emotional and psychological aspects associated with the condition sometimes result in intentional or unintentional suicide.7 A study conducted in an armed forces hospital in Pakistan proved that around 80% of participants had minimum or no intention to commit suicide. However, the number of self-injury cases in emergency departments (EDs) demands in-depth research and study.8

Furthermore, it has been established that improvements in the prevention and intervention of NSSI are required as a separate measure.9,6

There have been two intervention studies done so far specifically for NSSI. The first one10 evaluated emotion regulation group therapy (ERGT) for women with borderline personality disorder (BPD). Another intervention study11 could not report the effectiveness of the treatment and the chances of relapse.

It is widely believed by both clinicians and researchers that NSSI is challenging to treat.12,13 The severe and resistant nature of the condition asks for effective intervention to be introduced to deal with the damaging results of NSSI. There is need to study intervention in NSSI diagnosed as a separate disorder in DSM-5 excluding associated differential diagnoses, including BPD.14

CBT has been an effective treatment for certain psychological conditions, including deliberate self-harm behaviour.16 Additionally, Hypnosis has been used for several psychological disorders, like stress, anxiety and depression, with proven effective results.17 Based on the evidence available for CBT and Hypnosis regarding their efficacy and suitability for integration, CBH is used.18 The CBH is utilised following the Manual for Intervention.19

The quasi-experimental study was conducted from May 2019 to April 2020 in educational institutions (government colleges, semi-government and privates sector Universities) of Islamabad and Rawalpindi, Pakistan. These included Government Asgher Mall College for Boys, Rawalpindi, Capital University of Science and Technology (CUST) Islamabad, Bahria University, Islamabad, Air University, Islamabad. After approval from the institutional ethics review committee of Bahria University, Islamabad the sample size was determined using G-power calculator ver. 3.120 based on the results of a pilot study that was conducted due to lack of prior literature. The pilot study was conducted on a sample of 12 participants, with 10 completing the process, indicated the significant positive impact of CBH on NSSI symptoms.

The effect size 0.90 of the pilot study was used to determine the sample size of the main study for analysis of variance (ANOVA) and mean difference between two independent groups. The sample was raised using convenience sampling techniques from among students of either gender aged 18-25 years studying at various universities and colleges in the twin cities. A list of universities and colleges in the two cities was prepared, subject to permission from the institution and keeping in view the institution's proximity to the intervention location, one government college and three public and private-sector universities were selected. The inclusion criteria required at least three incidents of NSSI in the preceding three months and for the participants to be literate in English. Those having any differential diagnosis of NSSI, psychosis or drug use were excluded.

After taking informed consent from the participants, they were screened using Mclean screening instrument to screen BPD. The MSI-BPD instrument showed good sensitivity and specificity of 0.90 and 0.93, with a test-retest reliability being good at 0.72.21

During the selection and screening procedure, the demographics were obtained and the participants filled out the Deliberate Self-Harm Inventory (DSHI), which is part of Clinician-Administered NSSI Disorder Index (CANDI) that has shown good reliability, validity and feasibility, with interrater reliability 0.83, overall diagnostic agreement on all criteria 0.85, and internal consistency 0.71.22 Also used was the Symptom Checklist-90 (SCL-90).23 That can measure nine psychiatric symptoms and psychological distress. Its reliability, as assessed in Pakistan, ranges between 0.71 and 0.87. Scores on DSHI determined the number of days and incidents of self-harm required to meet the inclusion criteria. SCL-90 assisted in identifying differential diagnoses.

The initial assessment comprised suitability assessment for CBT, and Hypnosis was planned. The subjects were divided into intervention and control groups. They were not randomised in order to avoid bias. They groups were matched based on the frequency of days the participants had indulged in NSSI. CBH was presented as treatment in the intervention group, while the control group received no treatment. The rationale of the intervention was not blinded for the therapist or the participants.

There were 12-13 weekly CBH sessions of 50-60 minutes each. The sessions included thought record forms and homework tasks to monitor and practice the skills learned in the sessions. A single therapist conducted all sessions. 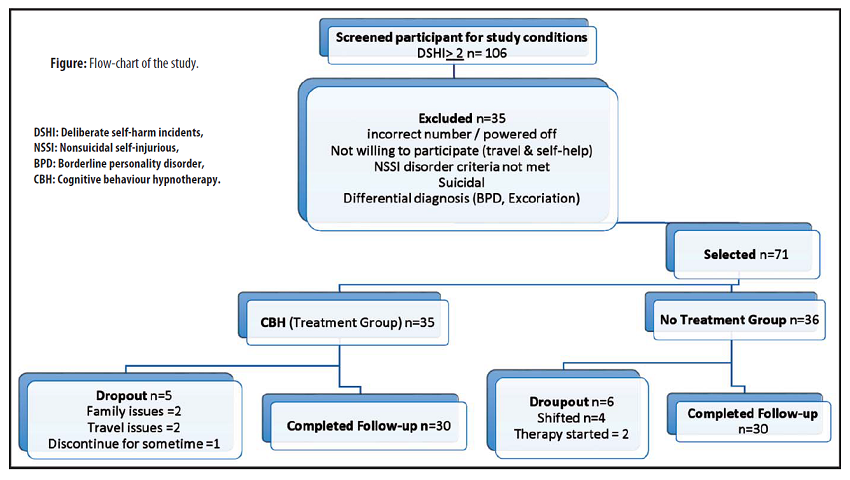 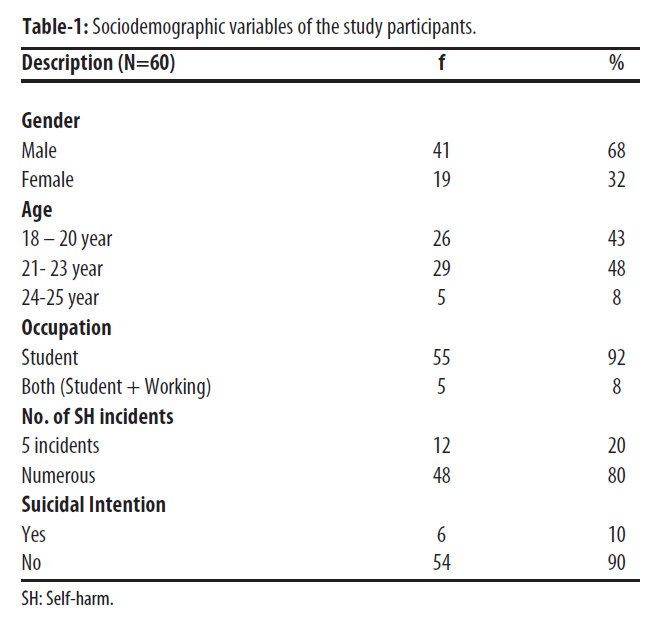 In the current study, the first, third and fourth hypotheses were accepted, while the second hypothesis was rejected as there was no significant difference between post-intervention and follow-up assessments. Consistent with the past researches, CBT showed its effectiveness in managing self-harm behaviour,25 and previous literature agrees that dysfunctional thoughts, suicidal cognitions, emotional problems, behavioural problems, and interpersonal issues can be dealt with using CBT. The detailed cognitive conceptualisation of irrational negative beliefs along with coping statements can help deal with self-harm behaviour. It also shows promising long-lasting results of improvement in the follow-up.26 CBT is beneficial for self-harm behaviour and is also considered a highly effective therapy for other psychological disorders.27

In addition to CBT, the effectiveness of Hypnosis can also be determined in adolescents and adults with psychological disturbance. Clinical Hypnosis is now considered a teachable, safe, effective, and vital self-regulation skill.28 Hypnosis has shown effectiveness for several problems, such as anxiety, pain, adjustment, stress and depression. Its efficacy is also highlighted when used as adjunctive therapy29 As discussed, the effectiveness of CBH is confirmed in the present study by providing support to existing literature regarding the valuable addition of Hypnosis in treatment to increase the efficacy.

Along with intervention strategies, identifying the most frequent deliberate self-harm strategy can help in planning the intervention as well as understanding the damage associated with self-destructive behaviour. The most frequent mode of self-harm was scratching to bleed, followed by punching oneself, banging head against something hard, and cutting the wrist or arm. These identifications can help the clinicians in measuring the impact of each of these types of self-harm and to plan prevention strategies. However, the least frequent mode of self-harm was burning with a cigarette or lighter, whereas dripping acid or rubbing the skin with sandpaper was never used by any participant in the current study. These frequencies point towards the latent understanding regarding the functioning of self-harm. The most frequent self-harm strategies were those that are more impulsive and instantly available without the use of any material or requirement, whereas the least used modes could be because of the non-availability of required materials or resources. Using this information, future research could target and figure out the specific demographics and treatment strategy correlates to control these harmful and impulsive urges.

Furthermore, the frequency of demographic characteristics reveals that self-harm has been seen frequently whenever the rules at home or in the family environment on daily activities are lenient. One explanation could be that they will be more prone to impulsive behaviour whenever there is less control over the adolescent or early adult activities. Also, adverse childhood experiences in the family can indicate that even when parents are not the source of negative experiences, other relatives and extended family can influence the individual's psychological well-being.

As per the findings discussed, the family environment and parental monitoring can be one factor to anticipate the onset of NSSI in adolescents. On the other hand, low parental monitoring could be a factor in developing NSSI.30 Adverse childhood experiences and social support have been associated with an increased risk of NSSI.31

Future research can extend and identify familial factors specifically involved in NSSI. It can figure out the other demographic characteristics and their impact on treatment effectiveness and the functioning of the NSSI condition. Future research can also be conducted for longer than one year to figure out the effect of the intervention on the DSM-5 criteria of NSSI disorder.

NSSI behaviour does exist in the community and is more frequent in early adulthood. In addition, CBH is an effective treatment strategy for NSSI and has long-lasting positive effects on the symptoms, as shown in the follow-up. However, there are no significant demographic characteristics linked with the efficacy of the treatment.

Disclaimer: The text is based on a Ph.D. thesis.

9.       Kukielka E. An Analysis of Nonsuicidal Self-Injury Among Children and Adolescents in Inpatient Psychiatric Hospitals and Units in Pennsylvania. Patient Safety 2020; 2: 30-41.