Objective: To compare the frequency of seroma formation in laparoscopic para-umbilical hernia repair with and without primary closure of defect.

Method: The randomised parallel group study was conducted at the Department of Surgery, Bahawal Victoria Hospital, Bahawalpur, Pakistan, from October 1, 2019, to May 31, 2020, and comprised patients of both genders age 25-65 years diagnosed as a case of para-umbilical hernia. The patients were randomised into group A which subsequently had laparoscopic primary repair of defect with non-absorbable suture prior to mesh placement, and group B which had laparoscopic repair without primary closure of the defect. Case sheets of patients were prepared for age, gender, duration of disease, operating time, body mass index and the presence or absence of seroma formation. Data was analysed using SPSS 20.

Hernia is a word derived from a Greek word 'heron', meaning a branch or protrusion. A hernia is the protrusion of the part of the normal contents of the abdominal cavity via a weakness in the abdominal wall.1 The commonly prevalent hernias are inguinal, femoral and ventral hernias. The ventral hernias are defined by defect in the anterior abdominal wall. Para-umbilical hernia is an acquired defect in over 90% of adults and it is a frequently encountered clinical problem that is infrequently discussed critically in medical literature.2 One of the most weak areas of the abdomen is the umbilicus which is one of the most common sites of herniation. Para-umbilical hernia is defined as midline hernia protruding through linea alba adjacent to umbilicus superiorly or inferiorly. These hernias constitute one of the common hernias of adulthood, and have the risk of converting from simple swelling to obstruction-strangulation. If the strangulation continues, the tissue can become gangrenous due to deficiency of blood supply. This can result in severe pain and vomiting which can result in a life-threatening condition requiring immediate surgery. It is important to define and synchronise patient and surgeon goals preoperatively for all hernia repairs. Diagnosis of a ventral hernia is usually based on the history and physical examination of the patient.

The actual incidence rate of primary ventral hernias is uncharted due to a variety of factors, like the definition of a hernia and the capability to trace data for diagnosis and procedures in both inpatient and outpatient settings.3 A healthcare analytics firm compiled data of the United States for the year 2010 and revealed that out of 988,483 hernia repairs, 504,845 comprised ventral hernias of all types.4 According to other reports, ventral hernias constituted 32% of all hernia repairs in the US in 2011 and 20125.There is not much data depicting epidemiology of ventral hernia in Pakistan.5,6 Sangwan et al.5 demonstrated that in Pakistan, the prevalence of inguinal hernia, para-umbilical hernia, umbilical hernia and incisional hernia was 76.35%, 12.38%, 3.95% and 2.7% respectively. Another study found that incidence of para-umbilical hernia was 14.54%.7

More than 350,000 ventral hernias are repaired in the US every year, and 75% of them comprise primary ventral hernias.8 Clinical signs and symptoms vary in small incidentally found defects, parastomal hernias and complicated hernias. Ventral hernia repairs are one of the most frequent elective procedures (90%), but the techniques of repair are diverse.9

Open ventral hernia repair leads to high incidence of recurrence (38-59%) plus postoperative wound complications due to long abdominal incision and wide tissue dissection.9 Laparoscopic ventral hernia mesh repair (LVHMR) was primarily reported by Le Blanc and Booth10 in 1993 and ever since the procedure has attained immense popularity. The reported benefits are that it can reduce the hospital stay, quicken the pace of patient recovery with minor complications and decreased recurrence rates.

Primarily, Liang et al.11 described the possibility of trans-cutaneous closure of fascial defects in laparoscopic ventral hernia repair. Approximating the fascial defect by trans-cutaneous closure may decrease seroma, eventration and recurrence following the procedure.12,13 Reduced postoperative bulging and low frequency of seroma formation after laparoscopic ventral hernia repair (LVHR) has been reported with this technique of closing the defect primarily. Normal anatomy is restored by re-approximating the abdominal wall under physiological tension by primary fascial closure, hence, restoring its function. The conventional technique of laparoscopic repair of para-umbilical hernia without defect closure results in higher incidence of seroma formation compared to when the defect is closed primarily.14 The current study was planned to compare the frequency of seroma formation in laparoscopic para-umbilical hernia repair with and without primary closure of defect.

The randomised parallel group study was conducted at the Department of Surgery, Bahawal Victoria Hospital, Bahawalpur, Pakistan, from October 1, 2019, to May 31, 2020. After approval from the institutional ethics review committee, the sample size was calculated using Open-Epi15 version 2.3.1 with 80% power of test and 5% level of significance. The sample was raised using consecutive sampling technique and all participants who met the eligibility criteria were included. Those included were patients of either gender aged 25-65 years diagnosed with para-umbilical hernia as per-operational definition, having American Society of Anaesthesiology (ASA) score 1 or 2, with duration of hernia >3 months. Those who were excluded were patients with recurrent hernia, as assessed on the basis of history, complicated hernia, such as irreducible hernia, strangulated hernia and obstructed hernia, as assessed clinically, those with chronic liver disease having ascites, as assessed on the basis of history and clinical evidence, and patients with radiation to abdominal tumours, as assessed on the basis of history.

After taking informed written consent from the subjects, they were randomised using lottery method into group A which subsequently had laparoscopic primary repair of defect with non-absorbable suture prior to mesh placement, and group B which had laparoscopic repair without primary closure of the defect. In both the groups, the procedures were performed by a senior professor of surgery. After trocars insertion and assessment of parietal defect(s), the hernial defect was closed primarily in group A or left in group B and mesh of suitable size with 4 cardinal sutures placed 1cm from the edges was inserted inside the abdominal cavity and placed in the proper position to overlap 5cm in all directions of the parietal defect using cardinal sutures. All the patients were assessed by the principal investigator for seroma formation 24 hours to 2 weeks post-operatively, as seroma formation after laparoscopic para-umbilical hernia repair can exhibit its peak at 7 days post-operatively. Blinding of the radiologist was not required as seroma formation is a hard outcome and non-absorbable sutures are visible on ultrasonography (USG).

Case sheets of patients were prepared for age, gender, duration of disease, operating time, body mass index (BMI) and the presence or absence of seroma formation. Data was analysed using SPSS 20. Mean and standard deviation values were calculated from quantitative variables of age, duration of disease, BMI, operative time, while frequencies and percentages were used for qualitative variables, such as gender. Pearson chi-square test was used to compare post-operative seroma formation in both the groups. Effect modifiers age, gender, duration of disease, place of living (rural/urban), operative time and BMI were stratified, and post-stratification chi-square test was applied. P<0.05 was taken as significant. 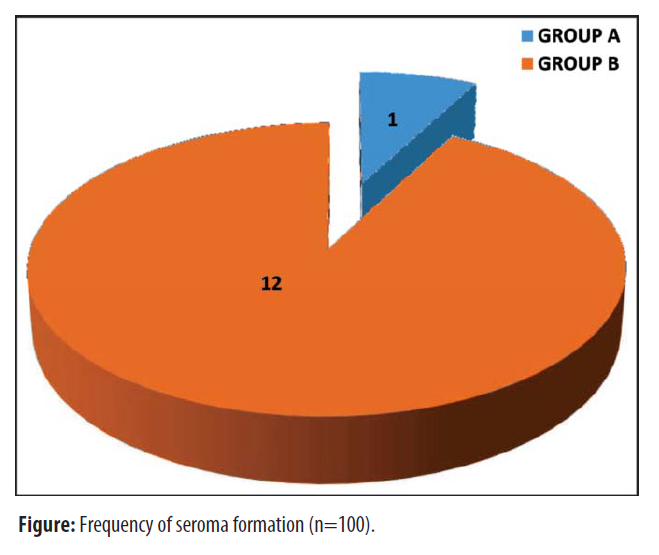 Stratification of seroma formation with respect to age, gender, place of living and BMI showed no significant differences (p>0.05) (Table-1).

Also, stratification of seroma formation with respect to duration of disease was not significant (p>0.05), but operative time showed significant differences (Table-2).

The current study compared the efficacy of laparoscopic repair of para-umbilical hernia with and without defect closure. An increasing interest and experience in minimal invasive surgery and the availability of new materials have encouraged the shifting trend from open technique to laparoscopic techniques in ventral hernia repair. It is now being used commonly, even for managing complex incisional hernias. The outcomes of this shift are minimal post-operative morbidity, a shorter convalescence period, and an acceptable recurrence rate.16 It is now believed that the primary advantage of the laparoscopic approach is that the frequency of wound infections is less compared to the open approach.17

Laparoscopic mesh repair is now a primary method for repairing ventral hernias since the last decade.18 The procedure aims at re-establishing the function of the abdominal wall and balances the intra-abdominal pressure and tension.19 The primary closure of the hernial defect results in better strength of the wall, reduces the dead space and the possibility of seroma formation.19 Bittner et al. found that LVHR was economical than open technique cost-wise, especially owing to decreased re-admission rate and early return to daily activities/work.20

In the current study, the mean age of the subjects was 43.92±10.77 years which is very much comparable with earlier studies.21-23

The current study showed that para-umbilical hernia was more common in females (65%) compared to males (35%), which is also in line with previous studies.21,23 Most of the patients having post-operative seroma formation were females (15.3%) compared to males (8.5%), which is contrary to a study24 which reported post-operative seroma formation in 57% males and 43% females.

The overall frequency of seroma formation was 13% in the current study which was higher than some earlier results23 and lower than some others.25 In the current study, postoperative seroma was present in 1(2%) patient in whom the defect was closed and in 12(24%) patients in whom the defect was not closed. The finding is comparable with earlier studies.23,25,26 In the current study, seroma was formed within 2 weeks, especially in the non-defect closure group where it was formed within 1 week of surgery, and literature27-31 also supports the finding. The current study only took account of the formation of seroma and not its mode of resolution or its complications. The relation of seroma formation with respect to overall age of patients, gender groups, duration of para-umbilical hernia, place of living and BMI was not significant (p>0.05) which is in line with previous studies.22,24 Only the operating time had a significant relationship with seroma formation (p<0.05).

The current study's findings should be viewed within the context of its limitations, including a small sample size and its single-centre orientation. Besides, only single blinding of the patients was done. Also patients with recurrent para-umbilical hernia, complicated hernia and those with co-morbidities, like ascites and cirrhosis, were not included which could have affected the outcomes. Future studies without these limitations are needed for findings that are generalisable.

Acknowledgement: We are grateful to Dr Asifa Kamal for her review and valuable suggestions which improved the text.