Objective: To evaluate the amputees' satisfaction with their prostheses and with the clinical services.

Method: The cross-sectional study was conducted at the Medical Rehabilitation Hospital, Madinah, Saudi Arabia, from August 2018 to November 2019, and comprised unilateral, traumatic lower limb amputees. Data was collected using the client satisfaction with the device, and the client satisfaction with service modules of the Orthotics and Prosthetics User's Survey instrument. Data was analysed using SPSS 23.

Following lower limb amputation and a subsequent fitting of the prosthesis, the amputee gait remains metabolically inefficient due to the deviations from the normal gait.1 Factors such as the design of prosthetic components and their fitting plays an important role in reducing the amputee gait deviations.2 However, traditionally used prosthetic feet do not necessarily improve the metabolic performance of the amputees,3 leading to dissatisfaction with the device and, hence, rejection of the prosthesis.4 Thus, the evaluation of amputee satisfaction plays a very important role in improving the design and fit of the prosthetic components as well as in improving the quality of clinical services.5-7 These components serve as powerful tools in the process of decision-making in the field of healthcare.8,9

The term 'satisfaction' can be defined in a number of ways, for instance, "an emotional or affective evaluation of the service based on cognitive processes which were shaped by expectations"; "a congruence of expectations and actual experiences of a health service"; and "an overall evaluation of different aspects of a health service".10 In essence, patient satisfaction requires adapting the patient's outcomes to the patient's expectations.6 But, despite being a useful parameter, evaluating amputees' satisfaction can be a daunting task as it relies heavily not only on the quality of the prosthetic and/or orthotic components, but also on the quality of the services provided to them.11

Many studies have evaluated users' satisfaction with assistive devices and services using a variety of questionnaires/instruments. Some of the validated instruments include the Orthotics and Prosthetics Users' Survey (OPUS),5 the Quebec User Evaluation of Satisfaction with Assistive Technology (QUEST),12 the Orthotics and Prosthetics National Office Outcomes Tool (OPOT),13 and the modified SERVQUAL questionnaire.11,14 However, the participants in these studies are users of various orthotic devices and the percentage of lower limb amputee participants is very low in these studies. A large number of lower limb amputations are carried out each year in Saudi Arabia,15 and evidence regarding amputee patients' satisfaction with their prosthetic devices and with the clinical services is needed to improve the healthcare policies, services and training of the prosthetists. This will help in meeting the needs of patients and improve the effectiveness of healthcare system. The current study was planned to evaluate the satisfaction of lower limb amputees with their prosthetic devices and with the services of the rehabilitation centre where they were fitted with their prosthetic devices.

The cross-sectional study was conducted from August 2018 to November 2019 at the Medical Rehabilitation Hospital, Madinah, Saudi Arabia, which is a secondary-care hospital with a capacity of 100 beds. After approval from the ethics review committee of the Taibah University, Madinah, the sample size was calculated with a population size of 1,000,000, with an anticipated frequency of 35% and confidence limit of 5% using OpenEpi calculator.16 The sample was raised using convenience sampling technique. Those included were native Arabic speakers aged >18 years having had either transfemoral, transtibial or partial-foot amputations and who received their prosthetic devices from the Medical Rehabilitation Hospital and had used their prostheses for at least three months. Patients with any neurological disability were excluded. Data was collected after obtaining informed consent from each participant. A researcher personally interviewed the participants either over the phone or during the follow-up visits to the hospital. In both instances, the survey form of each participant was completed in one sitting.

The interviewer collected demographic information of the participants which included age and gender. The ages of participants were recorded in four age groups; 0-20, 21-40, 41-60, and 61-80 years.  The clinical information included transfemoral, transtibial or partial-foot amputation, and patients' responses to the 11-item client satisfaction with the device (CSD), and the 10-item client satisfaction with service (CSS) modules of the 5-module OPUS instrument.5,17

The CSD module evaluates satisfaction with the fitting, weight, durability, maintenance, ease of donning, cosmesis, comfort, wear-and-tear of clothes, pain, skin irritation and users' affordability in terms of repair or replacement of the devices. The CSS module evaluates staffs' courtesy and patient responses related to opportunity to express concerns, training on device usage, waiting times, participation in decision-making, discussion of issues, reasonable time window for appointment, device selection, coordination between prosthetic and/or orthotic (P&O) facility and staff and the user's therapist and doctors.

The Rasch measure scale model was used to analyse the data as it is useful to convert raw sum scores to equal-interval measures,18 with 0 being the lowest and 100 being the highest score. The conversion allowed for the data to be stratified according to the amputation level, gender and age groups. Statistical analyses were done using SPSS 23. 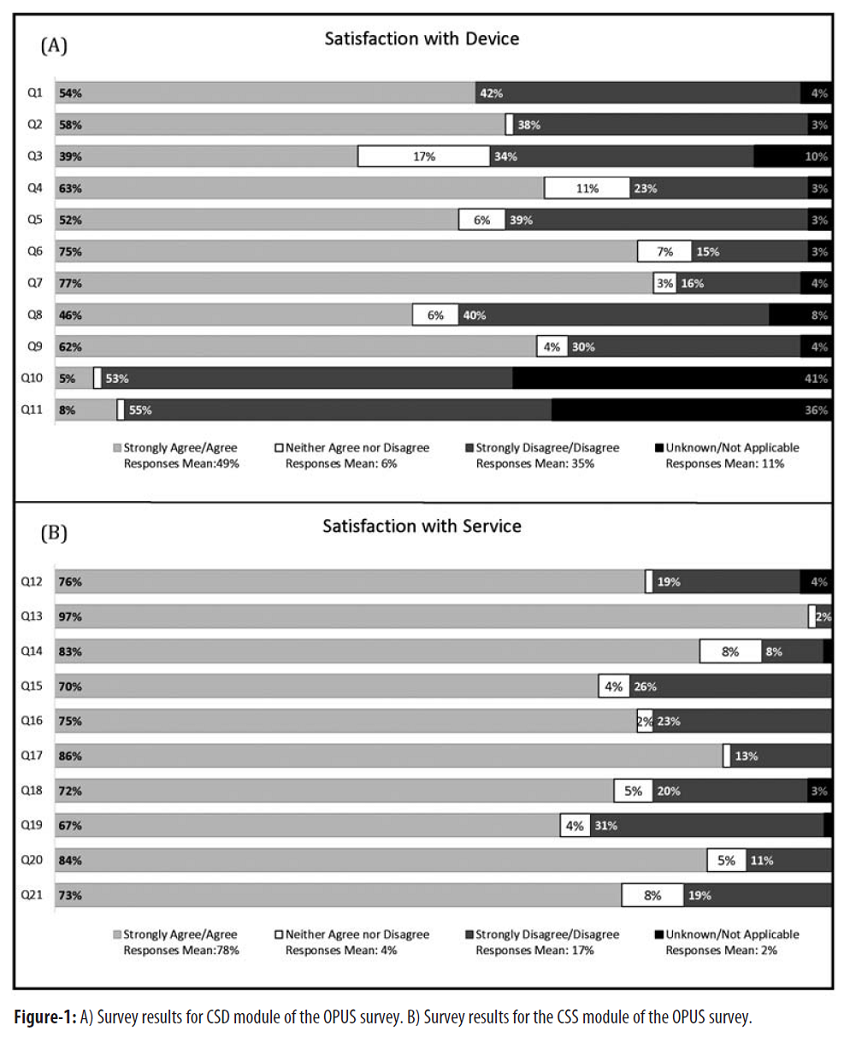 Due to the importance of evaluating user satisfaction in prosthetics and orthotics,11 there are a number of studies that evaluated user satisfaction from both the device and services perspectives using the globally acclaimed OUS instrument1419-25 The subject population in most of the existing studies, if not all, were users of various orthotic and prosthetic devices, but the percentage of lower-limb amputee participants was very low in such studies.19-25 There are more cases of lower-limb amputation than upper-limb amputation

Findings indicated that 212(96%) subjects had mean CSD and CSS scores below 60. This is not in agreement with the studies showing 17% and 78% participants being satisfied with their devices.11,19 Individual responses to the CSD module highlighted that affordability to purchase, maintain, repair or replace the prosthesis is a major issue. However, it is surprising as the healthcare is provided free of cost to all patients mostly by the government or by their health insurance providers. Perhaps the bias stems from the participants' fear of losing free provision of prosthetic devices if they provide honest feedback on their ability to purchase or maintain their prosthetic devices. In addition, on average 30% of the participants expressed their dissatisfaction with all the other areas of the CSD module, mainly, the fitting, cosmesis, comfort, pain, ease of donning and wear-and-tear of clothes with the devices. All these complaints are related to the fact that although high-quality imported prosthetic componentry is used, the fabrication is hand-made with limited equipment at the hospital.

In the CSS module, the participants overall had higher satisfaction level than the CSD module. The areas of minor dissatisfaction in CSS were related to inadequate discussion with the prosthetist about possible problems with the prosthesis, expressing concerns over the devices, or not being informed of equipment choices. These complaints pertain to limited fabrication facilities and P&O professionals, due to which the participants could not be given a range of prosthetic componentry and equipment to choose from.

Since this study specifically involved measuring the satisfaction of lower limb amputees using OPUS survey, comparison of the results of other studies9,14,28,29 will remain meaningful only if the participants' type as well as the survey type remain consistent with this study. For instance, three studies from Vietnam reported that only 10% or fewer amputees were dissatisfied with their prostheses,30-32 but the survey used in these studies contained only one general item regarding satisfaction with the device. Similarly, two studies from the Netherlands11,33 reported that 75% and 85% participants were satisfied with their devices and services respectively, but due to the difference between both the type of devices and survey items, the results cannot be compared. However, an Iranian study19 was found comparable as it used the same survey and modules, but it had only 11.6% lower limb prosthetic devices in the overall sample. Reported mean scores for the CSD and CSS modules for lower limb prostheses were 46.0 and 61.5 respectively,19 compared to 40.4 and 74.1 in the current study.

The strength of the current study is its large sample size, but the study has its limitations as well. The first limitation is the convenience sampling which limits the generalisability of the results. Besides, the interviews were conducted by patients' physical therapist. It might have been preferable if the interviews had been conducted by someone else. The described strategy was used because the physical therapist was a native speaker of Arabic and English and could explain the survey questions to the participants who were native Arabic speakers. The third limitation can be attributed to the participants' varying activity levels and wearing times of their prostheses. Higher levels of activity and longer wearing times of the prostheses may have a direct impact on satisfaction with the prostheses. Other limitations include the skill and experience level of the prosthetists which affect the fitting and comfort of the prostheses. Moreover, whilst there is a reasonable expectation from the prosthetic device, each participant has their own life challenges and expectations, which might be reflected in their responses. Therefore, the findings of the study should be generalised with due care and caution. Moreover, after adopting corrective measures, continuous monitoring of the satisfaction level is required to further improve it.