Objective: To compare the efficacy of oral non-steroidal anti-inflammatory drugs with locally injectable steroids in the treatment of plantar fasciitis.

Method: This comparative study was conducted from 10 May 2013 to 10 December 2013 at the Department of Orthopaedic Surgery, Punjab Medical College/Allied Hospital, Faisalabad, Pakistan, and comprised patients of either gender aged 26-60 years having unilateral plantar fasciitis who were not on any prior treatment and had moderate to severe pain intensity. The patients who received diclofenac sodium 50mg and acetaminophen 500mg twice a day for 4 weeks were assigned as Group-A, and those who received a single of 40mg (1ml) of methylprednisolone combined with 2ml of 0.5% bupivacaine into the tender most point of the inflamed plantar fascia were assigned as group - B. Pain was assessed using visual analogue scale at baseline and after 2 months of regular follow-up. Data was analysed using SPSS 10.

Conclusion: Locally injectable steroid was found to be a better modality for the management of plantar fasciitis in reducing mean pain score and sustained pain relief compared to non-steroidal anti-inflammatory drugs.

Plantar fasciitis is one of the most common causes of heel pain and has been estimated to affect about two million people in the United States, resulting in more than one million visits to primary care physicians and foot specialists.1,2 Its prevalence in the general population is estimated to range from 3.6% to 7%.3 Many patients seek help from their family physicians and foot specialists when pain becomes severe enough to cause significant distress and disruption in their daily activities.4 Plantar fascia is a dense fibrous structure that originates from calcaneus deep to heel fat pad, and runs distally to the ball of the foot and the toes.5 Histologically, plantar fasciitis presents with degenerative changes in the plantar fascia with or without fibroelastic proliferation and chronic inflammation.6 The diagnosis of planter fasciitis is primarily based on history and physical examination.7 The patients present with severe heel pain that occurs upon weight-bearing activity after a period of rest, most commonly in the morning. The pain normally resolves within an hour, but reappears in the evening after prolonged standing.8 Non-surgical treatment includes orthosis, stretching, splinting, taping, topical medications, oral non-steroidal anti-inflammatory drugs (NSAIDs), extracorporeal shock waves, laser, and percutaneous injection with steroids or botulinum toxin type A, autologous blood and platelet-rich plasma. Surgical options include release of plantar fascia, ultrasound-guided fasciotomy and co-ablation surgery.9 Several studies compared various treatment modalities with various degrees of success rate, but there is no clear-cut treatment protocol.8 Corticosteroid injection is usually one of the first-line treatments for plantar fasciitis.10 Steroid injection  has shown a clear-cut benefit.11 A small percentage of patients ultimately had open release of plantar fascia, but results were not always predictable or satisfactory.12 Biswas et al, showed clinical symptomatic improvement in patients taking injectable steroid treatment who had visual analogue scale (VAS) score of 7.05±1.02 at initiation of the treatment, 2.01±1.12 at 1 week and 1.92±1.22 at the end of 2 months, while in patients taking oral NSAIDs, initial VAS score was 7.15±1.08, at 1 week 5.14±1.86, and at the end of study at 2 months 5.76±1.62.9

The incidence of plantar fasciitis is likely to increase these days due to greater tendency towards physical fitness and running in the population.8 The current study was planned to compare the efficacy of oral NSAIDs with locally injectable steroids in the treatment of plantar fasciitis.

This comparative study was conducted from 10 May 2013 to 10 December 2013 at the Department of Orthopaedic Surgery, Punjab Medical College/Allied Hospital, Faisalabad, Pakistan. After approval from institutional ethics review board, the sample size was calculated using the World Health Organisation (WHO) calculator with 80% power.13

The sample was rasied using non-probability consecutive sampling technique from among patients visiting the outpatient department (OPD). Those included were patients of either gender aged 26-60 years having unilateral plantar fasciitis who were not on any prior treatment and had moderate to severe pain intensity (VAS score >7). Patients having any significant systemic disorder, like ischaemic heart disease, diabetes etc., or unilateral plantar fasciitis for >3 months were excluded.

After taking informed consent from the participants, they were assigned to group A, which received diclofenac sodium 50mg and acetaminophen 500mg twice a day for 4 weeks,and group B, which received a single injection of 40mg (1ml) of methylprednisolone combined with 2ml of 0.5% bupivacaine into the tender most point of the inflamed plantar fascia. The steroid was injected by the same team of orthopaedic surgeons in OPD by placing patients in the lateral recombinant position with the affected side down. The medial aspect of the foot was identified and the soft tissue just distal to calcaneus was palpated to locate the point of maximum tenderness or swelling where a 25-guage 1.5-inch needle was inserted perpendicular to the skin. Methylprednisolone (depomedrol) was injected slowly and evenly through the middle one-third of the width of the foot. Injection to the fat pad was avoided through the base of foot. These patients were advised to apply ice locally and avoid strenuous activity for at least 48 hours. Stretching exercises were started after 1 week of the initiation of treatment in both the groups. All the subjects were encouraged to use soft-heeled footwear, and to avoid standing for long periods of time.

Pain was assessed using visual analogue scale (VAS) at baseline and after 2 months of regular follow-up.

Data was analysed using SPSS 10. Mean and standard deviation (SD) were calculated for quantitative variables, like age and pain score, while frequencies and percentages were calculated for qualitative variables. Two independent sample t-tests were used to compare pain scores at baseline and at 2 months between the two groups. Independent sample t-test was used to compare mean VAS scores between the groups at baseline and post-intervention, while intra-group comparisons were done using paired t-test. P<0.05 was taken as significant. 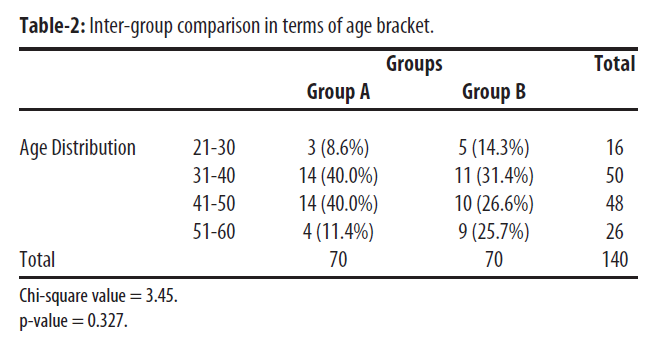 Plantar fasciitis is the most common cause of heel pain in adults.14 The prevalence of heel pain in the general population is estimated to range from 3.6% to 7%.3 Patients with plantar fasciitis respond well to non-surgical treatments. Surgical treatment is considered only after 12 months of aggressive conservative treatment failing to relieve patient's symptoms. There is inadequate data available about the indications of different treatment options available for the treatment of plantar fasciitis Injectable steroids provide sustained pain relief while other treatment modalities of conservative management provide temporary pain relief and have different limitations. The steroid injection therapy is cost-effective compared to NSAIDs because injection is cheap and is used only once, while NSAID therapy has to be used over two months, bringing more cost and also less compliance. The orthotics are even costlier. In a survey of 411 patients with plantar fasciitis, heel cups was ranked as the least effective of 11 different treatments.15 Disadvantages of night splints include mild discomfort, which may interfere with the patient's or a bed partner's ability to sleep. Long-term use of oral NSAIDs can cause serious systemic side effects, such as gastritis, peptic ulcer, oesophagitis, gastrointestinal (GI) bleeding, interstitial nephritis, sodium and water retention, thrombocytopenia, bleeding, pruritus, central nervous system (CNS and hepatic complications.8 Iontophoresis is the use of electric impulses from a low-voltage galvanic current stimulation unit to drive topical corticosteroids into soft tissue structures. It is best reserved for the treatment of elite athletes and labourers with acute plantar fasciitis whose symptoms are preventing them from working.

In the current study, a significant change in VAS score was seen in the steroid group compared to the NSAID group. These findings are supported by various clinical studies.9,2123-25

The current study preferred non-ultrasound-guided steroid injection because of cost-effectiveness, availability of radiologist, and time duration of the procedure. One study3 concluded that single ultrasound-guided injection was safe and effective in short-term pain relief, but its benefit did not last more than 4 weeks compared to the current study in which non-ultrasound-guided injection provided pain relief which was sustained even after 2 months. Ultrasound expertise is also not frequently available in every health centre. A recent clinical evidence report on various treatment modalities of plantar fasciitis concluded that there was insufficient evidence to support the use of steroid injection and advised that they could be harmful in the medium- to long-term use.26

Patients with known acute symptomatic plantar fasciitis can be treated with a variety of non-surgical modalities that improve symptoms in the short term.27 Locally injectable steroid has shown clear short- and long-term benefits, especially if it is combined with supporting measures, like stretching exercises, orthotics, splinting and taping etc. However, one should also have surgical options in mind both for non-responding patients and patients having complications as a result of the injection. Surgery for plantar fasciitis remains an appropriate treatment option for a patient who does not respond to conservative therapeutic options.28

9.       Biswas C, Pal A, Acharya A. A comparative study of efficacy of oral nonsteroidal antiinflammatory agents and locally injectable steroid for the treatment of plantar fasciitis. Anesth Essays Res 2011; 5: 158-61.