Trunk extensors endurance with arms parallel to the trunk is superior to other arms positions: Randomized controlled trial

Method: The prospective, randomised, assessor-blinded, controlled- intervention study was conducted from December 2017 to October 2019 at the College of Medical Rehabilitation Sciences, Taibah University, Madinah, Saudi Arabia, and comprised males aged 20-24 years who were randomly assigned to one of the four groups. Group A had their hands above the head, group B had their hands behind the head, group C had their hands parallel to their trunk, and group D had their hands on the chest. Data was collected at baseline, and after 6 and 8 weeks of static trunk extensors endurance training. Isokinetic outputs of peak torque and average power were also measured. Data was analysed using SPSS 23.

Results: Of the 60 participants, 15(25%) were in each of the four groups. The overall mean age was 22.02±1.2 years. At baseline, there was no significant difference among the groups (p>0.05). There was significant intra-group improvement for all outcome variables after 6 and 8 weeks of training (p<0.05).

Conclusion: Static endurance of the trunk extensors with having arms parallel to the trunk was superior to other arm positions, especially after six and eight weeks of training but didn't affect the isokinetic outputs.

Trunk extensors endurance abilities are essential to protect the spine1 and have successful rehabilitation as well as fitness programme2 for healthy college students.3,4 Static trunk extensors endurance has been extensively reported in literature using different supporting surfaces and different arms positions.5-7 Some researchers have used the regular Swiss ball,7 the peanut ball5 or the arc as supporting surfaces.6 A study compared the trunk extensors static endurance among healthy participants while lying on the Swiss ball versus the peanut ball with hands behind the head throughout the testing.5 Another study evaluated the trunk extensors static endurance while lying on the wooden arc with arms behind the head.6 A sample of patients with discogenic low back pain (LBP) using the Swiss ball had their hands behind the head during testing.7 A study tested the endurance abilities of lumbar trunk muscles from prone position with arms along the sides parallel to the trunk.8 Another one studied static back endurance from prone lying position with the upper limbs along the sides.9 Studies110 also evaluated static back endurance from prone position with participants' arms crossed over their chest.

The current study was planned to compare the effect of arms positions on the static endurance ability of trunk extensors, and to investigate the effect of home endurance training of trunk extensors on peak torque and average power isokinetic outputs. It was hypothesised that the arms positions would not significantly affect the trunk extension endurance holding time, and that endurance training would not significantly affect peak torque or average power isokinetic outputs at 60°/sec or 120°/sec.

The prospective, randomised, assessor-blinded, controlled- intervention study was conducted from December 2017 to October 2019 at the College of Medical Rehabilitation Sciences (CMRS), Taibah University, Madinah, Saudi Arabia. After approval from the institutional ethics review committee, the sample size was determined using G-Power 316 based on power 0.8, alpha (a) error probability 0.05, effect size 0.4, three measurements and four groups in addition to data from previous studies.4-8 The study was registered at ClinicalTrials.gov. The sample was raised using convenience sampling technique from among healthy male CMRS students aged 20-24 years who had regular physical activity as part of their daily routine. Those having any back or abdominal surgery, any recent back injury, significant limitation of mobility or suffering from any neuromuscular disorder were excluded. Informed consent was obtained from all the participants before taking baseline data related to demographics, including recreational status, using a data-collection form. The participants were randomly assigned to four groups using sequentially numbered opaque sealed envelopes. Group A subjects had their hands above the head, group B subjects had their hands behind the head, group C subjects had their hands parallel to their trunk, and group D subjects had their hands on the chest (Figure-1). Spinal mobility was measured before demonstrating the type of trunk extension endurance testing and training programme. Isokinetic assessment of trunk flexors and extensors was carried out at 60° and 120°/sec at baseline, after 6 weeks and 8 weeks.17,18

Forward spinal mobility was recorded by having every participant to stand up in erect standing position with feet shoulders' width apart. Every participant was instructed to keep the knees straight and bend forward as far as possible trying to touch the floor. The researchers measured the distance from the finger tips to the floor. Touching the floor indicated zero distance and good flexion spinal mobility.11 Backward spinal mobility was recorded by having every participant lying down on the stomach and arching his trunk as far as possible while keeping the pelvis secured to the plinth.7 The researchers measured the perpendicular distance from the sternal notch to the surface of the plinth. Side-bending mobility was measured by having every participant stand up straight, bare feet and bent to the side as far as possible sliding his hand down his lateral thigh.4 The researchers measured the distance from the tip of the middle finger to the floor before bending and then after side-bending. Side-bending mobility was calculated as the percentage of the change in mobility after bending divided by the distance before bending and then subtracting the percentage obtained from 100%. The order of measurements was counterbalanced to overcome any threat of order effect to internal validity.

Trunk endurance testing was conducted by having every participant to lie down on the stomach, breathe normally and arching the trunk backwards as far as possible.8 A small roll was used to fill up the space under the pelvic-hip area. Every participant was instructed to count up in order to keep the mouth open and not to hold his breath. Participants started off with a familiarisation session and were measured at baseline after which they were sent home for 8-week home exercise training programme.17 Measurements were repeated at 6 and 8 weeks. Groups A, B and C had training programme with a training volume of 2 sets of 10 repetitions with two-minute rest in between done twice/day. Group D just received some instructions regarding the significance of assuming good posture without engaging in any home training exercises. Adherence was facilitated by using a diary and follow-up phone calls to continuously remind the participants. During the recording of endurance timing, the researchers closely observed the trunk and recorded the holding time in seconds using stopwatch. Ceiling effect of four minutes was used. If the trunk started to show shaky movement, the researchers instructed the participants to hold on and continued to record the endurance time. If any participant could not hold on, the researchers finished the test and recorded the timing.

Isokinetic testing of the trunk muscles was recorded at the CMRC isokinetic laboratory. Measurements were taken using the Biodex dynamometer (Biodex 3 pro; Biodex Medical System Inc., 20 Ramsay Road, Shirley, New York, United States). All measurements were recorded by experienced researchers at the same time of the day. Every participant assumed the position of having the trunk in the upright position, aligning the axis of rotation of the dynamometer with an imaginary line between anterior superior iliac spines. Hip and knee angles were maintained at 90° with the thighs parallel to the floor. Dual position of trunk extension-flexion was used, limiting the excursion to 50° range (+20° of extension and -30° of flexion). The measurement protocol had been recently used and adopted by the researchers.15 The protocol consisted of 2 sets of consecutive flexion-extension performed at 60°/sec and 120°/sec angular velocity with two-minute rest between the sets.15,17 Verbal encouragement was given to prompt the participants to exert maximum effort. Every participant was instructed to keep his arms and hands crossed over his chest during measurements. Stability was enhanced through applying Velcro straps on the upper trunk, the pelvis and the thighs. In addition, adjustable pads were used behind the head, the sacrum, the upper trunk and the anterior surface of the tibia.

Data was analysed using SPSS 23.19 Descriptive data and demographics were reported as mean ± standard deviation, while participants' characteristics were reported as frequencies and percentages. Data, as appropriate, was expressed as median and interquartile range (IQR). Test of normality of data distribution was conducted using Shapiro-Wilk test. Levene's test was used to determine if equal variances were assumed. Kruskal-Wallis test was run across the categories at baseline, 6-week and 8-week measurements. A non-parametric related samples Friedman's (c2) two-way analysis of variance (ANOVA) by ranks was run for every exercise group at baseline, 6-week and 8-week measurements. Pair-wise comparisons were conducted when there was significant difference between or within groups. Spearman's rho was conducted to determine the degree of agreement between back extension endurance holding time recorded at 6 and 8 weeks of training. Statistical significance was set at p<0.05. 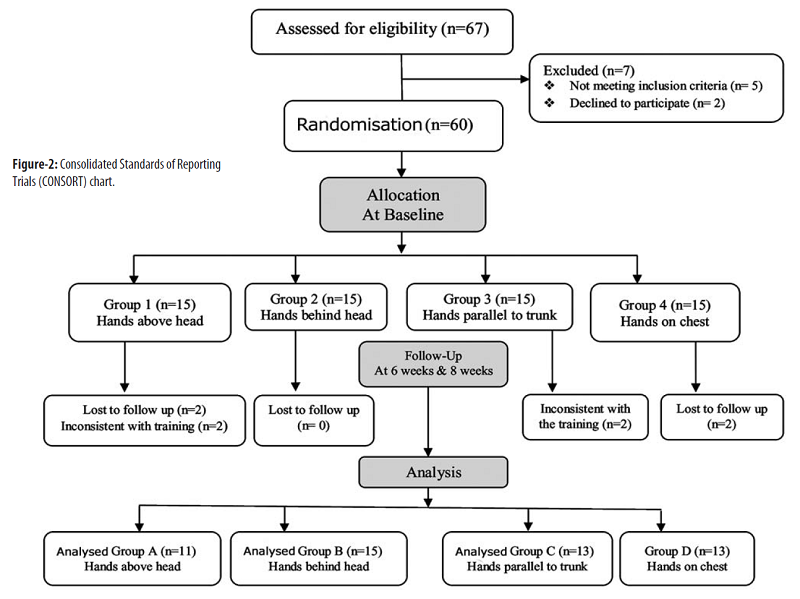 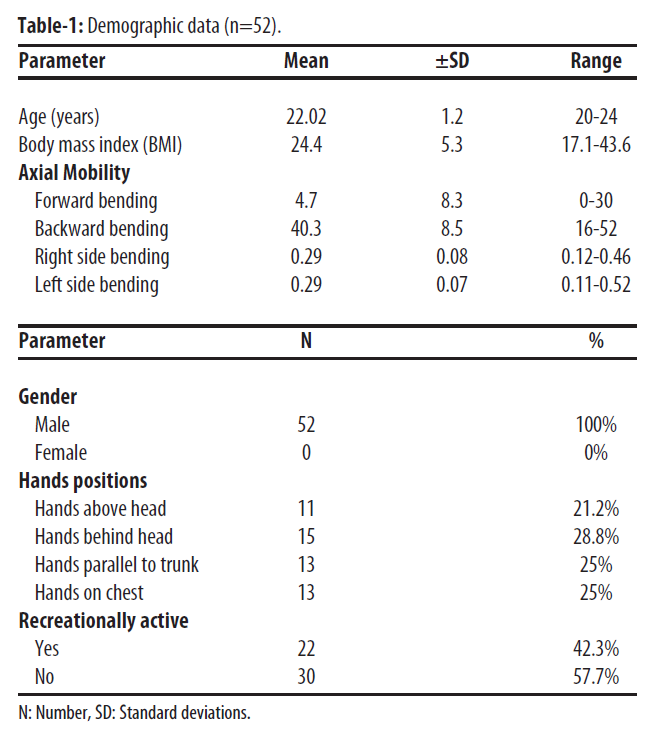 At baseline, there were no significant differences among the four groups. At 6 and 8 weeks, the difference was significant (Table-2) 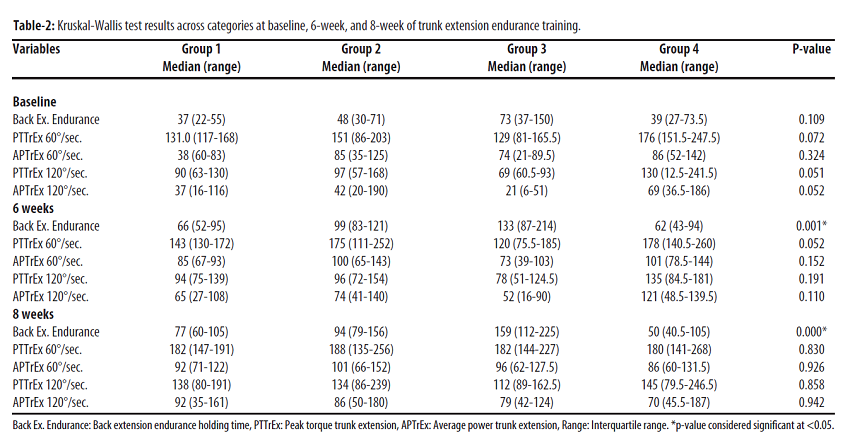 Many researchers1,3,9,10,20 have used modified Biering-Sørensen test for evaluating trunk extensors endurance. It was noticed during the current study that holding the upper body in horizontal position was laborious and needed adequate trunk muscle capacity to attain and maintain holding adequately in that position. Physical therapists and clinicians have to provide close supervision all the time to ensure safety, especially among patients with different spine disorders. A study concluded that Biering-Sorensen test was reliable and had adequate discriminative validity for measuring static position-holding time among subjects with and without non-specific LBP.20

Schellenberg et al. studied the trunk extensors endurance on healthy subjects using the prone bridge test. Subjects had to raise the pelvis from the floor while lying prone. Subjects had to rest on elbows and toes while maintaining shoulders, hips and ankles in straight line. The position was held until fatigue prevented them from holding on any further.21

A study reported a significant decrease in trunk muscles static endurance abilities among healthy college students, but it could not be judged if the decrease in trunk endurance was attributed to weakness of the trunk muscles or the upper extremities or both together.22 The effect of different arms positions on balance abilities during single-leg-standing has also been studied, and better balance was reported with hands-on-chest position.23

Physical therapists and clinicians should consider the importance of specifically tailoring home exercise programmes to match the ultimate goal in order to have successful functional outcomes. The clinicians should be prudent and careful in interpreting the isokinetic test results obtained at a specific position.14

Having arms parallel to the trunk during static trunk endurance was found to be superior to any other arms position, especially after 6 and 8 weeks of trunk extensors training. Specificity of static endurance training and specificity of the adopted position should be substantially considered during testing and training programmes.

Acknowledgement: We are grateful to the Deanship of Scientific Research at King Saud University, Saudi Arabia.

3.       Johnson OE, Mbada CE, Akosile CO, Agbeja OA. Isometric endurance of the back extensors in school-aged adolescents with and without low back pain. J Back Musculoskelet Rehabil 2009; 22:205-11.

20.     Latimer J, Maher CG, Refshauge K, Colaco I. The reliability and validity of the Biering-Sorensen test in asymptomatic subjects and subjects reported current or previous nonspecific low back pain. Spine 1999; 24: 2085-9.